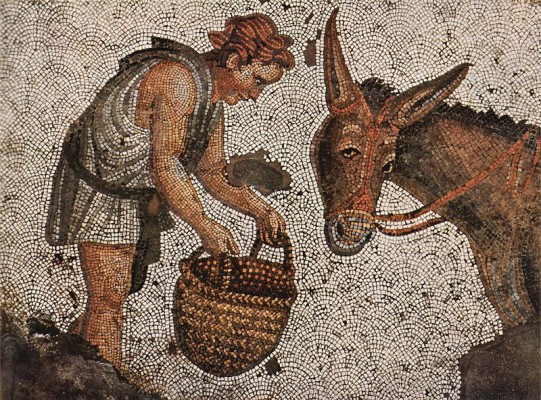 Turkey is a country that sits at the physical as well as cultural crossroads of Europe and Asia.   Modern Turkey is the successor to several great civilizations which are still influencing mankind  centuries after they died away.  The oldest of these civilizations was the Hittite culture which introduced Egyptian culture and learning to Europe; then came the Anatolian civilization and then the Greeks, as Alexander the Great introduced the Hellenistic culture, followed by the Romans.   One cannot forget the first Christian empire, Byzantium, which grew from Constantinople and reminds us of the importance of this piece of the earth.

Zeugma was established on the Silk Road to China in 300 BC by Seleucus Nicator, one of Alexander’s military generals.  It was considered an important military and commercial center, built at a ford on the Euphrates River and having grown into a major metropolis.  The word Zeugma means ‘bridge’ or ‘crossing’ in ancient Greek.  It was the last city of the Greco-Roman empire before it passed into the Persian Empire.  Estimates vary on the number of inhabitants that lived in the city, but most experts agree that around 70,000 people lived there, with the wealthy building luxurious villas covered with exquisite decorative mosaics. 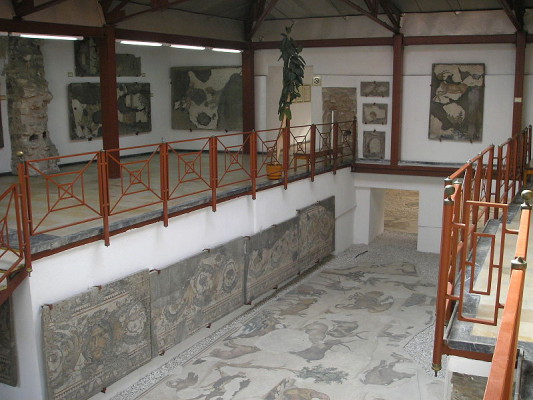 The city also housed two Roman legions and was a collection point for road tolls.  As art most often imitates life, the mosaics left behind are an invaluable educational tool to help us understand the interactions of the life of this vibrant city.  The city was invaded several times and also seriously damaged by an earthquake; eventually it was abandoned sometime in the 6th century.  Sadly, as with many ancient sites, it was invaded by 20th century looters who did untold damage while raping the site for artefacts to sell to the voracious collectors in the rest of the world.

The city sat on the banks of the Euphrates River, and with the advent of modern dam-building most of this city is now submerged.  In 2000 a major project was launched to save as much of the city as possible before it was lost to the waters of the Birecik Dam.  This was the birth of the Zeguma Mosaic Museum, the largest mosaic museum in the world.  It houses an extensive collection of not only mosaics but also wall paintings, frescoes, sculpture and other artefacts.  When the danger to this magnificent site was realized, the Packard Humanities Institute, supported by the Turkish Ministry of Culture, launched an incredibly ambitious project to save as much of the city and its mosaics as possible before the waters devastated the area. (National Geographic) 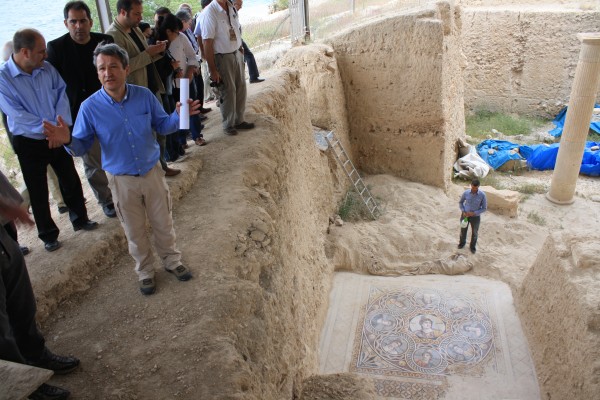 Most of the mosaics from Zeugma were moved when the nearby dam was built, since the land they were on would become submerged. Newly discovered mosaics like this one featuring the Muses are protected and left in place. Prof. Kutalmış Görkay gives the Dialogue of Civilizations team an introduction. (Photo by Andrew Howley)

Thousands of square meters of truly astounding and beautiful mosaics were carefully lifted, restored, and laid safely down again.  At least 3,000 square feet of mosaics, including some 15 complete murals, were removed from two Roman villas.  A team of international archaeologists and restorers laboured relentlessly to uncover, protect, remove, restore and rebuild the mosaics and other artefacts before they were flooded.  Two of the restorers were Mine Yar and Celal Kucuk from Istanbul; they described how the mosaics were saved.  To move the mosaics that had a large central picture such as the Poseidon mural, whose central emblem spread over 300 square feet, they used a large wooden roller that was nine feet long and four foot in diameter.  The team slipped metal rods under the mosaic, raising it up off the floor.  They then positioned the wooden roller and gently rolled the mosaic up like a carpet.  Smaller frescoes were cut up into manageable pieces, moved and then reassembled, but this method was not favoured by many of the restorers as the process invariably did some damage to the mosaics.   As work on the protection of the murals progressed, some fascinating facts came to light.  The team found that in three of the murals that they moved, sections of the tesserae (small mosaic blocks) had been replaced.  Could the lady of the house have decided to change a color scheme?  They also found that in a couple of the geometric mosaics, stones had been used irregularly to fill in gaps; the team theorized that perhaps the pattern had been changed at some point in time and the artisans had done their best to fill in the changed shapes.  The last fascinating insight was that under the mosaics, once lifted, they found drawings that showed the workers where to lay the panels.  It seems that the mosaics were built off site and then transported in sections to the house and laid in a specific pattern following the drawings on the floor.

Some of the extremely large mosaics that were uplifted and moved depicted well-known Roman gods such as Poseidon chief of the water deities, Oceanus and his wife Tethys who gave birth to 3,000 daughters and 3,000 sons who all became spirits of rivers and springs, Achelous the horned king of Euphrates, Demeter the goddess of agriculture, Dionysus the god of wine and fertility, and Achilles the warrior.  Perhaps the best known of all the mosaics is the one named Gypsy Girl with her stunning, haunting eyes that are so evocative of the National Geographic cover picture of the Afghan girl.  It is believed that the Gypsy Girl is Gaea, the goddess of the earth who, the Romans believed, gave birth to the Titans.

The detail, color, and stunning grandeur of these mosaics is an everlasting testament to the artists that created such magnificent works.  It is a pity that their names have been lost to the mists of time, even as their art has survived to astound generations to come.