Bartitsu: The art of Victorian Self-defence

Imagine yourself on the streets of London at the begining of the 19-th century. Imagine yourself attacked by a group of street hoolingans, what will you do in this situation? Today, you have a variety of martial arts from which you can choose and learn to protect yourself from an atacker. Back in those days, many of the oriental skills we know, had not still arived in Europe, but thanks to one man, thigs will start to change.

Edward Barton-Wright is a british civil engineer and one of the first Europeans to both learn and teach Japanese martial arts. He is also known as a pioneer of the concept of “hybrid martial arts.” Barton used to work in Japan from 1895 to 1898. During that time he had the oportunity to study a few Japanese martial arts such as  jujutsu in at least two styles, including the Shinden Fudo Ryū in Kobe and Kodokan judo in Tokyo.

A portrait of Mr E. W. Barton wright and the cover of his two-part essay: “The New Art Of Self Defence”

When he returned to Europe, in early 1898, Barton will use his knowledge of the Japanese martial arts, he will combine them and make his own self-defence martial art called “Bartitsu.” In bartitsu, he implemented techniques and elements of judo, jujitsu, British boxing and fighting with a walking stick. This new skill of his was a true orient and occident hybrid, tyical for the Victorian era.

This new self-defence skill became very popular, especially amongst the middle and upper classes in the British society, mostly due to the fact that street gangs became more active and crime was getting more and more publicity every day.

In 1900, Barton opened the Bartitsu School of Arms and Physical Culture. The school ofered a variety of activities, such as classes in different self-defence dsciplines, combat sports and phiysical therapy too. In his sport club there were many members, which included soldiers, athletes, actors, politicians and also some aristocrtas. In the next 2 years, Barton Actively promoted the activities of his club by making exhibitions of self-defence techniques and organizing tournaments in which his Bartitsu champions were dueling with wrestlers in different Eurropean wrestling styles.

Unfortunately, in 1903, the school was closed and Barton focused on developing and pursuing his interest in physical therapy, although, there was a rumor that he continued giving private bartitsu lesson until the late 1920’s. His physial therapy business that specialized in applying electricity to threat ilnesses such as rheumatism were observed with scepticism and probably this is wht lead to his eventual bankrupcy. Very little is know for his live in the period from 1930 to 1950. Besides being remebered as the as the pioneer of Japanese martial arts in Europe, Barton died in 1951, aged ninety, unmarried and relatively poor.

Anyways, after he and the instructors moved on in 1903, bartitsu became a dying skill, really close to dissapearance. Luckily, it remaind allive and remembered and sir Arthur Conan Doyle is to blame for that. In a single paragraph in his 1903 Shrelock Holmes Novel, “Adventure of the Empty House”, Holmes calims that he defeated his worst enemy, Moriart using: “baritsu

“baritsu, or the Japanese system of wrestling, which has more than once been very useful to me.” It seems totaly apropriate that Holmes would use this kind skill, ater all, he was renowned in adapting the best tehniques of various disciplines at his own advantage.

It is not known why Arthur Conan Doyle misspelled the name of the skill (baritsu). Maybe because of copyright issues or peobably because the London Times did the same typo in 1900 and he used this as a reference.

Today, thanks to enthusiasts and martial art researchers, bartitsu is being revived and its popularity is again inceasing. The members of “The Bartitsu Society”, spent years of their time in thorough research through archives finding all available documents refering to bartitsu. They managed to make a more or less complete picture of this technique and put all the information about it on the inernet.

Based on the collected data, The Bartitsu Society created, “neo-bartitsu”, which is basically bartitsu as it might have looked in the past. Because there is no person from the past who can confirm the principles of real bartitsu, there is no real acredited bartitsu instructor today. That means that bartitsu is open for interpretation and every instructor makes his own modifications and his own recreation of the real bartitsu. But in the basis of every variant are the primary principles that Barton described back in 1899:
Experts from The Bartitsu Society explaiun that some of the moves used in neo-bartitsu are from the original time. For example, modern boxing involves close body contact while the boxing moves used in bartitsu are reminding of the fist fight style from the 19-th century, where oponents used to circle eachother in the ring. The point of bartitsu is to avoid hiting the oponent and make him walk away istead of causing him damage. But, if necesary, modern bartitsu students can use jujitsu moves to finish a fight. 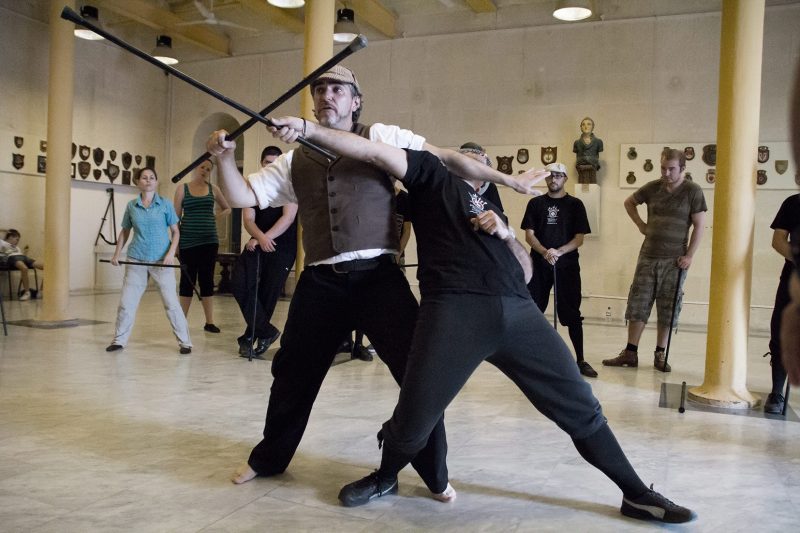 Baritsu practitioners today, learn the skill for different purposes. Some of them (girls mostly), learn it because of the corageous Jujitsuffragettes, a fighting goup of women that secretly trained to protect the leaders of the UK women’s right moement before WWI. Other reason for which peole are folowing bartitsu is the fascination with steampunk. Victorian styled sci-fi has always been popular and not only in comic and anime circles, but in fashion also.

At the end, the question is asked whether bartitsu can protect you from the dangers on the modern day streets?

Matt Franta, a bartitsu instructor says that although many of the tehniques are made for fighting hoolingans, they weren’t considering modern day hoooligans. Tony Wolf, another instructor, points that this is not something that can be learned in a few classes, especially if you wish to really learn how to defend yourself and not only participate in a historical recreation.
Looking at everyday events today, the chan ces that a bad guy will atack you on the street with an umbrella are not really that high. That is why a lot of bartitsu instructor are making their own versions, using various different objects, such as a baseball bat.Even if you can’t defend yourself, bartitsu looks like a lot of fun and something that a “real gentleman” should definitely try.
Source: theatlantic, bartitsu, historicalfencingmalta, martialartshelponline
« 3D modelling now being used to convict Nazi officers with war crimes
The reason why cockpits are called cockpits »