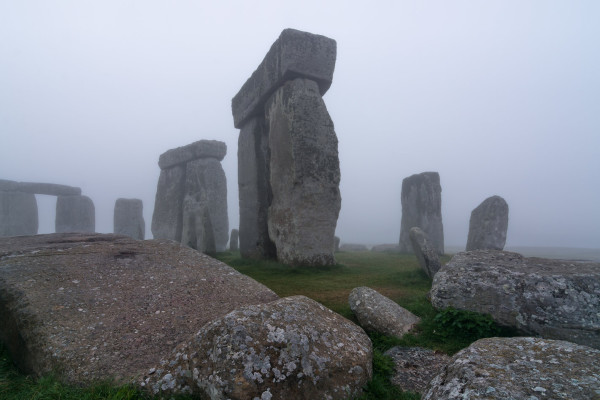 Stonehenge is a mystical place that is painstakingly giving up its secrets one at a time.  This magical place, situated in Wiltshire about eight miles from Salisbury, was built over millennia and has been marvelled at and researched for hundreds of years.

The construction of this ancient site was undertaken over at least 1500 years ago and some archaeologists believe that the terrain around the monument was developed as much as 6500 years ago.  Modern archaeology has struggled with damage done by poor excavation carried out in the past, and poor or inaccurate dating of artefacts.

At first the theory of the monument was that it dated to around 3100 BC, when a circular ditch about 110 meters in diameter was dug, and the chalk that was excavated from the ditch was used to raise a bank around the ditch.  The builders of this ditch left a large entrance to the northeast and a smaller one to the south.   Archaeologists found some tools and the bones of animals buried in the bottom of the ditch.  A 17th century historian, John Aubrey, then located fifty-six pits located around the inner circle.  There has been considerable debate about these pits, with opinion divided on whether at one time they contained wooden poles or they were used to assist in the erection of the inner ring of standing blue stones. 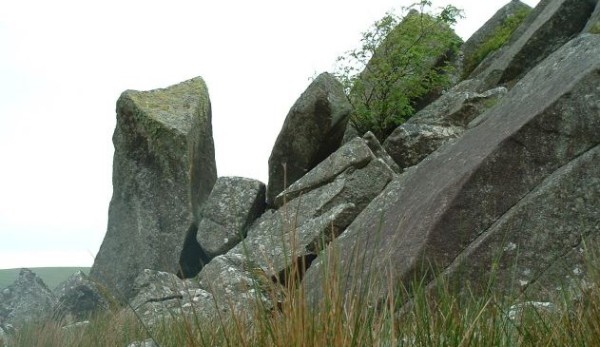 Dolerites found on the hill of Carn Goedog, pictured, match those used to build the ancient monument. However, it is still not known how the large stones travelled the 160 miles from South Wales to Amesbury, where Stonehenge was built. source

Archaeologists speculate that around 3000 BC the architects of Stonehenge built a wooden structure within the circle, as a number of post holes have been excavated.  It appears the bank was reduced in height and the ditch silted up naturally.  Bodies, with evidence of cremation, were found in the Aubrey Holes, and archaeologists believe that Stonehenge was used as a cremation cemetery at this time.

Though the site cannot be conclusively dated, it’s thought that around 2600 BC builders abandoned wood in favour of stone and erected 80 standing stones, of which 43 remain today. These blue stones originate in the Preseli Hills some 240 kilometres away in Wales.  The north-eastern entrance was widened at this time, with the result that it precisely matched the direction of the midsummer sunrise and midwinter sunset of the period.

Between 2600 BC and 1600 BC the monument had been updated and changed considerably.  The major change was that thirty sandstone monoliths were brought to the site, erected into the one hundred foot circle of stones, and a ring of lintels attached via a tongue and groove joint on the top.  Within this circle stood five trilithons (three stones, two standing upright topped with another as a lintel) arranged in a horseshoe shape, with the open end facing northeast.  The blue stones were rearranged and a small number rose in an oval in the centre of the inner circle. 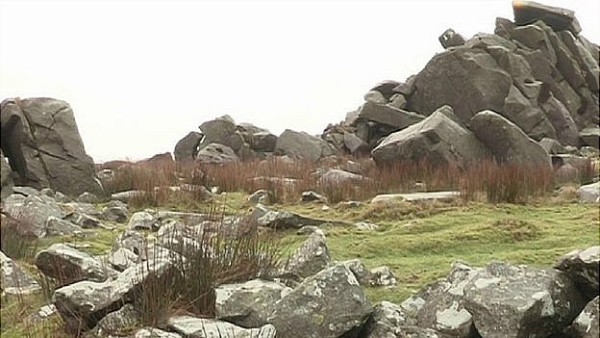 Stonehenge was built and altered over a period of about 1,000 years, starting around 2,600 BC. There are two types of stones at Stonehenge – the larger sarsens and the smaller outer rings of bluestones, which are now known to have come from Carn Goedog, pictured. source

One of the enduring mysteries of this site is the origin of the blue stones.  It was clear from the outset that they were from the Preseli Hills and eleven stones of spotted dolerite were used at Stonehenge.  But still unclear is the exact location within the Preseli Hills from where the stones were quarried and how prehistoric man, without the use of the wheel, was able to get the stones from Wales to Salisbury plain and erect them to form the magnificent monument we see today.

In 1923 the renowned academic HH Thomas presented the theory that the blue stones came from Carn Meini in the Preseli Hills in Pembrokeshire. This was never confirmed, and now a peer-reviewed paper to be published in the Journal of Archaeological Science will present proof that the stones actually originated a mile away from Carn Meini, at Carn Goedog.  Three geologists, Dr Richard Bevins, Keeper of Natural Sciences at the National Museum of Wales in Cardiff,  Dr Rob Ixer of University College in London, and Professor Nick Pearce of Aberystwyth undertook painstaking research to identify the precise origin of the stones as about three miles from Crymrch in the Preseli Hills of Pembrokeshire. 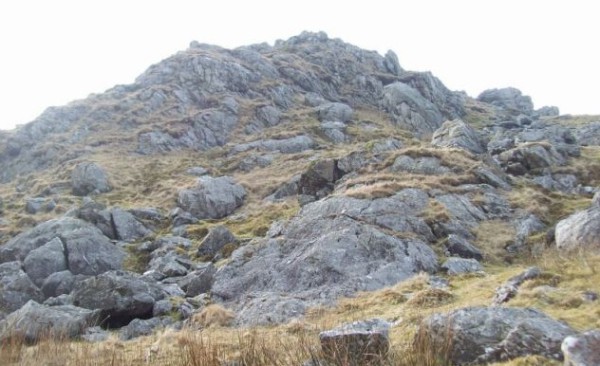 A paper published in 1923 was the first to suggest the stones came from Pembrokeshire. It claimed the particular dolerites that make up the ancient site came from a hill called Carn Menyn, pictured, and archaeologists have been digging on this incorrect location for the past 90 years in search of human activity. source

These three geologists looked at the mineral composition of the spotted dolerites colloquially known as bluestones.  Rock is formed when molten magma starts to cool and in this process some elements form part of the crystals of the cooling magma whilst others remain outside the crystals but are trapped in the magma.  The new research showed conclusively that more than half of the dolerite bluestones came from Carn Goedog, farther north than the original location as put forward by HH Thomas.

That successfully answers the origin question, but Stonehenge is not finished with posing questions quite yet.  The next logical query is into how the builders of Stonehenge covered the couple of hundred kilometres to Salisbury with the huge stones. HH Thomas proposed that the stones were transported overland, possibly by using logs as rollers, southwards to Milford Haven. There they were loaded onto boats, carried by water to a landing point closer to the actual site, and rolled again on log rollers to Stonehenge.

This predominant theory has been questioned by some researchers, who suggest that these dolerites were naturally carved out of the hills during the ice age and carried to Salisbury as part of the debris within a glacier.  With the retreat of the glaciers these stones would have been deposited near Salisbury, where they were collected by prehistoric man and used as part of the monument.  Which theory is correct?  No one knows; it could be a combination of the two. This part of the mystery of Stonehenge remains a secret. (Wales Online)

No one is really sure why Stonehenge was built or what it was used for; this tantalising question also haunts archaeologists to this day. While there are a few irrefutable knowns, such as that the sunrise and sunset at mid-summer and mid-winter line up with certain features of the circle, no one knows for certain what the original intention of the stones were.  This is one of those alluring enigmas that will keep scientists, mystics, and all the rest of us imagining what might have been.

« The reason why cockpits are called cockpits
Aerial Photography: One of the Most Common Archaeological Techniques »