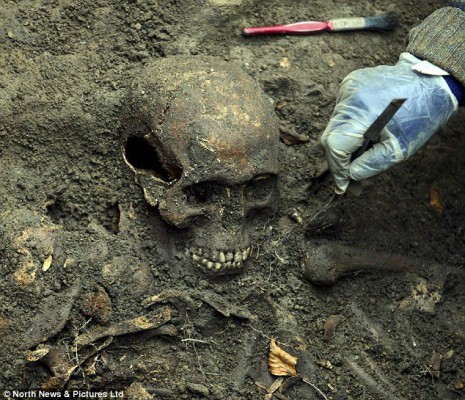 One of the most unsavoury periods of English history occurred in the years 1642 to 1651 – the English Civil War.  The war, fought not through patriotism but based upon religious ideals, culminated in the beheading of Charles I on 27th January 1649.

The English parliament, under Lord-General Oliver Cromwell’s leadership, had passed a law stating that no new king could be crowned, so the dead king’s son could not appear in London to inherit the throne.  Charles, the son of Charles I and Henrietta Maria of France, landed in Scotland, where he was crowned Charles II.  The Scottish Covenanter government had changed sides in the English Civil War and were now supporting  Charles II, as they believed he would help them to impose the Presbyterian faith on both England and Scotland.  Immediately after his crowning he started gathering an army under the leadership of Sir David Leslie with the aim of restoring himself to the English throne.

On 22nd July 1650 Cromwell crossed the border into Scotland at the head of an army of 16,000 men.  This was a new army because he had just drowned Ireland in blood and he was now set to destroy Scotland for daring to support Charles II.  Reports indicated that Cromwell marched into Scotland well-supplied and with the promise of food being sent from Kent.  The big error made by Cromwell’s army was that they were poorly-supplied with tents; in fact, they marched with only 100 tents, and these were reserved for officers.  The rank and file would pay dearly for this error.

As the New Army marched towards Edinburgh Leslie launched a guerrilla war against them.  Leslie’s knowledge of the terrain was put to good use and he ambushed the Roundheads at every pass – after each skirmish the English were left with more wounded and more bodies to bury.   The Scots had stripped the countryside bare as part of their campaign as they retreated, carefully avoiding a pitched battle.  The English were running short of supplies and the foot soldiers were starving and ill. 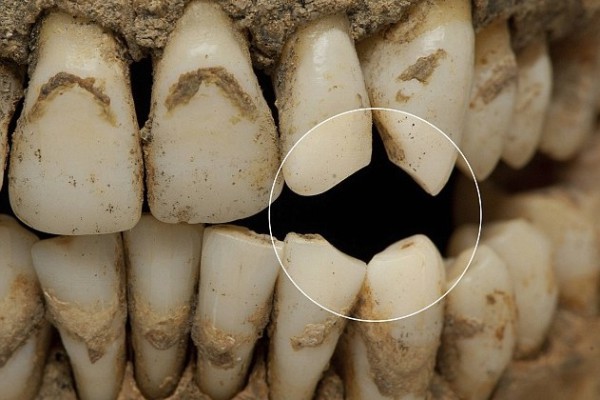 Distinctive markings on skeletons have given away secrets about the soldiers’ lifestyles. Here the uniform teeth marking (ringed) suggests this man was avid pipe smoker. source

The English marched as far as Edinburgh but were unable to breech Leslie’s defences. As they had been seriously weakened by the incessant harrying of Leslie’s forces, rain, and poor rations, they retreated to Musselburgh, where the hundreds of wounded and sick soldiers were sent out by sea.  The Scots continued to harass the English forces, pushing the remaining 11,000-strong remnant of the English army onto a narrow strip of land near the town of Dunbar.  Leslie’s troops occupied the high ground atop Doon Hill and Cromwell knew that this position was unassailable.   The English troops had no protection from the weather and were subsiding on poor food; they were disheartened from the constant harrying to which they had been subjected. 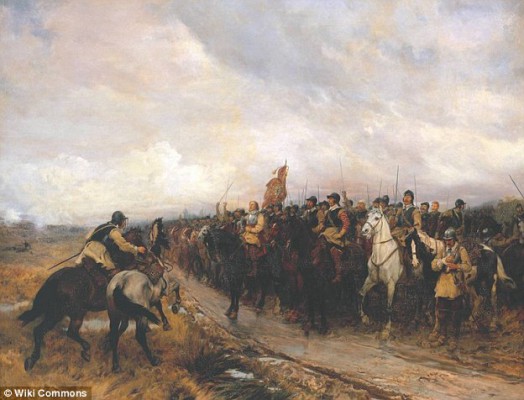 Following the battle, Cromwell was able to march to Edinburgh where he eventually captured the capital following the defeat of the castle. Prisoners were force-marched towards England, to prevent any attempt at rescue, and imprisoned in Durham Cathedral (Cromwell at Dunbar, painted by Andrew Carrick Gow pictured)

All Leslie had to do was maintain his past battle tactics and wait while the English starved or fell ill from the weather and poor sanitation.    Sadly, at this point the Covenanter clerics snatched defeat from the jaws of victory when they overruled Leslie’s advice.   The Covenanters had demanded that Charles II issue a public statement condemning his mother’s Catholic religion and his father’s poor leadership.  Charles refused to meet all their demands and an insipid variant of the original declaration was released to the public.  This infuriated the Covenanters who then, in an ideological meltdown, launched an inquisition into Leslie’s army.  They summarily dismissed some 3,000 of Leslie’s best, professional soldiers for sins such as loose morals or swearing publicly.   This decimation of Leslie’s army was bad enough, but then the same committee refused to heed Leslie’s advice to stick to his supremely successful guerrilla tactics.   The Covenanters declared that God was on their side and insisted that Leslie advance and attack.

No amount of persuasion on Leslie’s part could sway their belief that they were better military tacticians than the man who had so successfully led the campaign up to that point.    Leslie ordered his army to advance and Cromwell was astounded to see his brilliant adversary embark upon such an idiotic manoeuvre.  Cromwell knew that he had one chance to defeat the Scots and he audaciously ordered a pre-dawn attack on a lightly defended position between the Scots infantry and cavalry.   The ensuing battle was a resounding success for the English, and it is reported that Cromwell burst into uncontrollable laughter. (Mail Online)

The battle was no laughing matter for the Scots.  They lost 3,000 soldiers killed and the rest of the army fled into the surrounding countryside, where they were hunted down by the English.  When news of the victory reached London, the Dunbar medal was struck for all officers and men.  It was the first medal ever made for the military and another was not struck until Waterloo, 150 years later.

In addition to the deaths there were some 10,000 taken prisoner, a number Cromwell could not manage. Five thousand of the wounded and sick were released on parole, and another 5,100 men were forced to march 100 miles south as fast as possible to prevent Leslie’s army from regrouping.   The Scots that survived the Durham Death March were all enslaved and sold either as slaves or indentured servants to the New World colonies.

This stain on the fabric of English history has recently seen the light of day as skeletons were discovered in a mass grave close to Durham cathedral.  These are the remains of the Scottish prisoners of war, some as young as thirteen years old, who did not survive that infamous forced march ordered by Cromwell.   Records show that some 1,700 prisoners died of malnutrition, disease, cold or wounds on the march from Dunbar.

Richard Annis, senior archaeologist with Archaeological Services Durham University, said at the time: ‟We have found clear evidence of a mass burial and not a normal group of graves.”

The bodies had been dumped into the earth with scant regard for their placement.   Research conducted on the bones using radiocarbon testing, along with available historical information, ensured that this mass grave of tangled bones could only belong to between seventeen and twenty-eight Scottish soldiers aged between thirteen and twenty-five who were part of the Durham Death March.

« Experts Suggest that Stonehenge May Have Been Erected in Wales 500 Years Before Being Moved to Stonehenge
The East Germans Had a James Bond Too. His Name was Bredebusch, Werner Bredebusch »