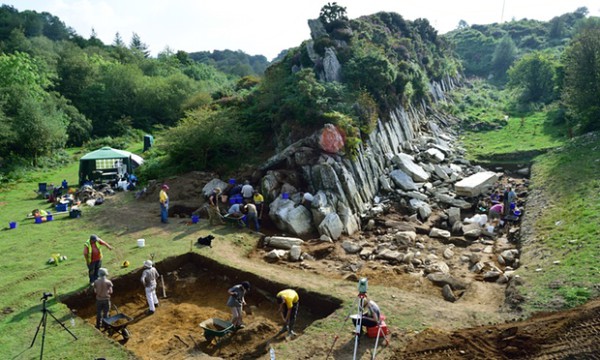 A research team headed by Mike Parker Pearson, Professor of British Later Prehistory at University College London, in conjunction with archaeologists and researchers from the Universities of Southampton, Bournemouth and Manchester, has released a paper that has turned history buffs on their heads!  Extensive work has recently been done at Carn Goedog and Craig Rhos-y-felin in the Preseli Hills in Wales with regard to the original location of the so-called blue stones from Stonehenge.  Three geologists, Dr. Richard Bevins, Keeper of Natural Sciences at the National Museum of Wales in Cardiff,  Dr. Rob Ixer of University College, London, and Professor Nick Pearce of Aberystwyth had conclusively identified Carn Goedog as the original site of the blue stones, and recent research has built on their initial findings.

The work done has turned up some truly remarkable results.  The most phenomenal is that the researchers believe the monoliths were not quarried specifically for Stonehenge but had been erected in Wales at a similar type of monument some five hundred years earlier.  Presumably they were then torn down and moved to Stonehenge.   The team found the fires thought to have been used by the prehistoric quarrymen to cook their food, especially hazelnuts.  Carbon dating of these artefacts shows the age of these items as 3,400 BC –  some five hundred years older than Stonehenge. (The Guardian)

Close examination of the rocky outcrops in Wales has revealed several cavities in the rock which closely match the size and shape of the Stonehenge monoliths.  When the rock in these outcrops was formed in the mists of geological time it cooled and formed into pillars.  This formation simplified the job of the prehistoric quarrymen, as they did not have to vertically slice up the rock. They most probably used wooden wedges that were hammered into convenient fissures and then soaked with water to cause them to swell.  This swelling then caused the monoliths to snap off at the fissures.

With the site at Carn Goedog dating to a time much earlier than Stonehenge, the question becomes one of what happened to the monoliths during those intervening years.  Did it take that long to move them from Wales to Salisbury Plain?  None of the academics believe that this is true, and nearly all agree that somewhere between Carn Goedog and Stonehenge must lie another prehistoric monument just waiting to be found.  Professor Kate Welham of Bournemouth University, said, “We’ve been conducting geophysical surveys, trial excavations, and aerial photographic analysis throughout the area, and we think we have the most likely spot. The results are very promising. We may find something big in 2016.”

These new discoveries have also, more or less, put paid to the theory that these monoliths were moved from Wales to the Salisbury plain by glaciers during the Ice Age.  They were then deposited near the site of Stonehenge when the ice receded, and prehistoric man simply raised them on the site.  Clear proof that the columns were deliberately quarried infers that they must have been transported by humans from Wales over the one hundred and fifty miles to Salisbury Plain.  This will inspire further research into how that was accomplished; overland or by sea, or a combination of the two.  Without the availability of the wheel it must have been a formidable task and one that involved many hundreds of people.

The last question that currently mystifies the researchers is why would the Welsh monument be torn down and the monoliths moved away?  What could have caused the people to tear it down after having spent a considerable amount of time quarrying enormous pieces of stone and, presumably, standing them up?  Was this some form of reconciliation or an undertaking of unification?  Was it the end of a war and the stones booty?  As with many archaeological finds, the what, who, and when can be pretty accurately determined while the why is left to the imagination.  Theories abound, but until there is considerably more in the way of actual facts, let your imagination run wild!