The “Oldest Gold Of Mankind” was found in the Varna Necropolis, on The Bulgarian Black Sea Coast

In 1972, an excavator operator working in the industrial zone of the city Varna will stumble upon something that will turn out to be a very significant historical site. The Varna Necropolis was discovered approximately half a kilometer from Lake Varna and 4 km from the city center. It is estimated that it was made sometime between 4,600 BC to 4,200 BC. Around 300 graves have been found at this burial site, but the most significant is grave 43. It contained the remains of a high-status person and it was covered with treasures. This single grave contained more gold than all of the other archeological sites from that period put together.

We constantly speak about early, ancient, civilizations like the ones that thrived in Mesopotamia, Egypt, and the Indus Valley, that shaped humanity as we know today. But not a lot of people know about the mysterious people that lived on the shores of the Back Sea in modern day Bulgaria 7,000 years ago. Archeologists call this civilization the Varna Culture.

The Varna Culture was considered as small and insignificant for a long time until it was proven that this was a highly developed culture that preexisted Mesopotamian and Egyptian civilizations. The discoveries made in the Varna Necropolis also showed that it was that first known culture that produced artifacts made of gold. This site is the largest prehistoric necropolis in south-eastern Europe.

According to the evidence gold processing in the Varna region started between 4600 and 4200 BC. Ore processing technology was constantly developing here, and soon, the craftsmen became very skilled  in manufacturing copper and gold items. They had the perfect products for trade.  Varna people were perfectly situated between the east and the west world. One one side they had the Black Sea and the opportunity to trade with their neighbors that lived around it and beyond, and on the other side the road was opened for trade with the whole Mediterranean region. Because of this Varna became an important trading enter.

They were able to accumulate great wealth (especially the craftsmen that worked with gold and copper) and develop a nice society mostly consisted of Metallurgists, merchants, and farmers, kind of a class system. This was the basis upon which a powerful and influential culture emerged, one that would spread across Europe for thousands of years.

Before 1972, the only artifacts found from the time of the Varna Culture were tools, vessels, utensils, and figurines made from stone, flint, bone, and claystone made. But, after archeologists Mihail Lazarov and Ivan Ivanov revealed the Varna Necropolis to the world, this amazing civilization was viewed from a different perspective. 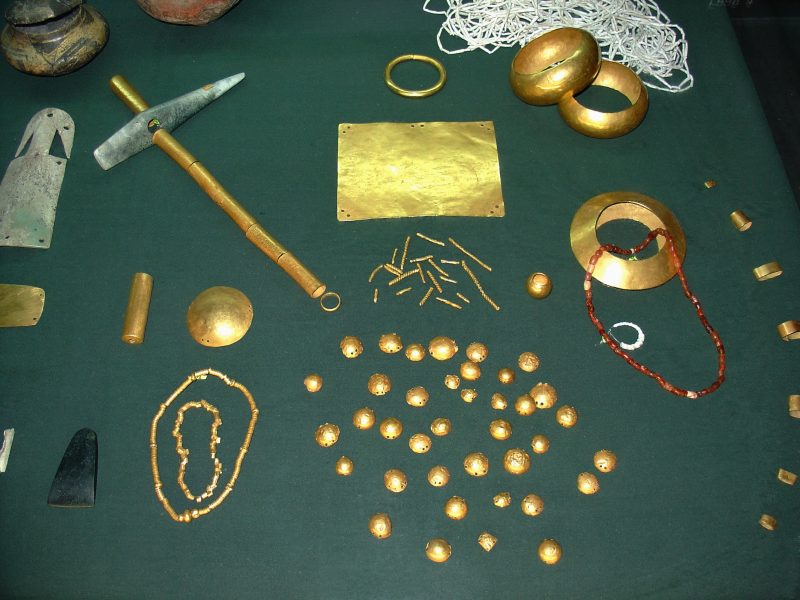 These are probably the oldest gold artifacts in the world. Photo credit: Yelkrokoyade, via Wikimedia Commons

Inside the 300 graves of the necropolis, archeologists unearthed more than 22,000 unique artifacts. This huge list of items contains more than 3,000 golden artifacts, that is 6 kilograms of pure gold. Besides this, there were also a plenty of high-quality copper, flint and stone tools, jewelry, shells of Mediterranean mollusks, pottery, obsidian blades, and beads.

Among the many elite burials in the necropolis, there was one that was different from the others. Different in the sense of “more spectacular.” After uncovering grave 43, archeologists concluded that it was the final resting place of a high-status male, probably a ruler, or some kind of leader in the society. This was the richest grave of all that have been found, not only in Varna Necropolis but in the whole world at that time. The person was buried with a beautiful golden scepter in his hand. The scepter is a symbol of high rank or spiritual power. His whole body and its surroundings were covered with golden items. Necklaces, bracelets, earrings, round shaped golden items placed on specific parts of the body, and he even had a golden plate around the genitals. Together with the golden artifacts, the weapons that probably belonged to this person were also placed around his body. 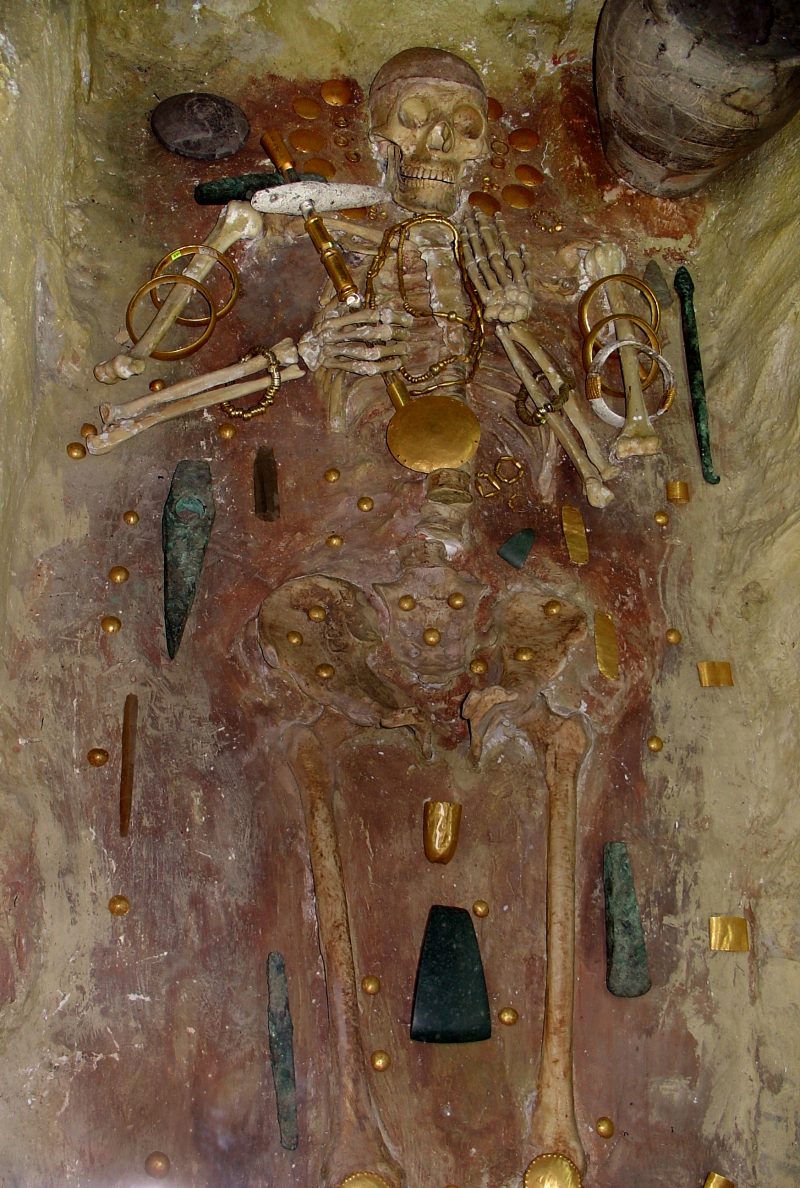 Besides the material richness that Varna necropolis provided archeologists with, it also gave an insight into the hierarchy in this ancient society, their religious beliefs and intricate burial practices. Males and females were buried differently. Males were laid out on their backs while females were placed in fetal position. There was also another type of graves found. Some of the graves didn’t contain skeletons, they were only filled with items. These symbolic graves, known as cenotaphs, were one of the richest with gold and treasures. They contained masks made of clay and gold amulets made in the shape of women, placed below the mask, where the neck of a buried person was supposed to be. 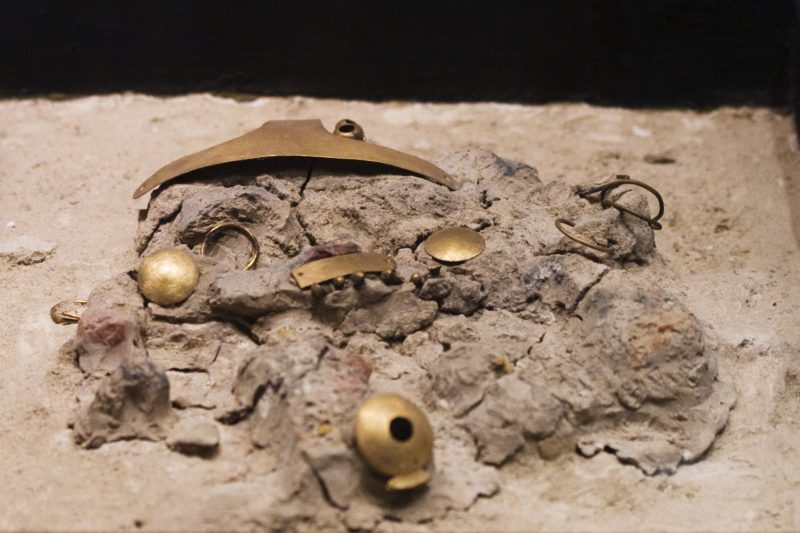 Some of the items found inside the “symbolic graves” Photo credit: Ann Wuyts, via Wikimedia Commons

The amulets are symbolizing pregnancy and fertility which indicates that they are meant for women. The empty graves also contained a copper pin, a flint knife, and a spindle whorl. This further indicates that the symbolic graves were made for women, or as a gift for some kind of deity that symbolizes the feminine principle. It is still a mystery why these graves were left without human remains.

The Varna civilization is without direct descendants, they were probably assimilated in other surrounding European and Asian cultures during all those centuries of turmoil in this region. However, they left a huge legacy and with their accomplishments they made the appearance of the following European civilizations possible. We may never know how the Varna people really lived, but Varna necropolis with all the magical artifacts opens our imaginations.