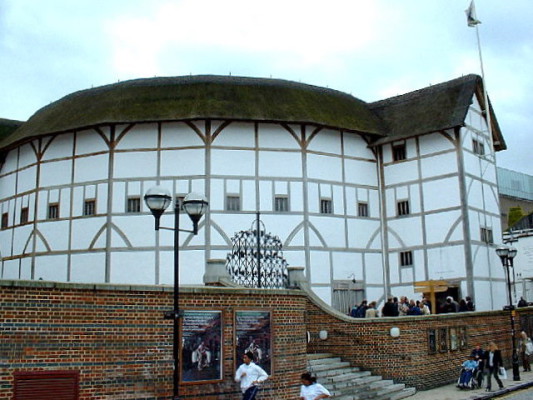 While some people go to the head of a town to discuss things and get what they want, Shakespeare and his theater troupe decided to arm themselves with daggers and swords and stealing an entire theater was the right path to take.  However, if Shakespeare hadn’t done that, who knows if he would have been able to rebuild the famous Globe theater that we all know today?  The Globe still holds the Bard’s plays for the entertainment of tourists; the theater is still one of the most-visited landmarks in London today.

According to a 400-year-old document that was just found, Shakespeare and his troupe rebuilt The Globe in order to use it as an acting theater. The document gives full detail on how Shakespeare’s group first flattened an entire theater that was built on the River Thames. Then there was a disagreement with the landlord before the rebuilding of The Globe could begin.

Natives of the area retold the story many times, but this is the first time a document actually suggests what happened. The document that has the account of the group’s behavior went on display in London as part of an exhibition at the Somerset House. Unlike other displays, the Shakespeare document was a joint project between the National Archive and King’s College London.  They worked together in time to commemorate the 400th anniversary of Shakespeare’s death.  What better way could there be to commemorate that event than to present the document which gives full details of the rebuilding of The Globe?

The document dates back to 1601, and in it Shakespeare writes that there were about a dozen men who helped him take the theater. He explained it as a confederacy which took over the theater using swords, daggers, bills, and axes as weapons.  Other parts of the document claim that Shakespeare and his group caused a ruckus – disturbing the peace and terrifying people. Things got quite rowdy after his landlord told Shakespeare that he no longer wanted a theater on his property, and that’s when Shakespeare and his men took it over. 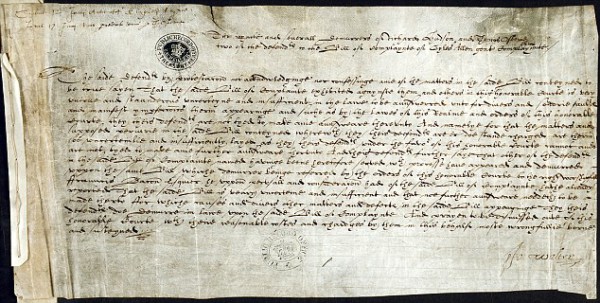 The six documents date back from the 17th century.  They originally belonged to the National Archive and have never actually been displayed all together until the exposition at the Somerset House. One page of the document, dated 1595, states that Shakespeare was never punished or prosecuted for taking over the theater.  He ended up not earning enough to pay the tax on the theater.  Included with the documents is Shakespeare’s will, with his handwritten promise that he will leave his best second bed to his wife and his favorite bowl to his daughter.

After many months of research, curators have found a way to display the documents without harming them.  Since the papers have been in the archives, they have never been around humidity or sunlight.  One professor said that this will be the first, and most likely the last, time these documents will be displayed; that is why the exposition is so important for tourists to visit.

The theater Shakespeare and his men built lasted only about a decade; it ended up burning down from a fire in 1613.  The fire was caused by a cannon misfiring on the stage during a show.  The theater was rebuilt the following year, but torn down again in the 1640s, along with other theaters, so that Puritans could build more homes in the area.

The Globe was again rebuilt in 1997.  Although built with new materials, the designers made sure the replica was as close to the original as possible.  The builders took the last remaining evidence of the original design and built the new theater from that.  Those designs were used in 1599 and 1614 for past rebuilding.

With the Shakespeare documents were also some of the plays that were performed in front of the king and queen, court cases of marriages in 1604 that Shakespeare had brought together, and the Bard’s full will written in 1616.

« Meet Kudzu or The Vine that Ate the South- Apocalyptic photos capture the dangerous beauty of the invasive plant
Interesting photos glimpse into everyday life of The Combat Zone, Boston in the 1970s »