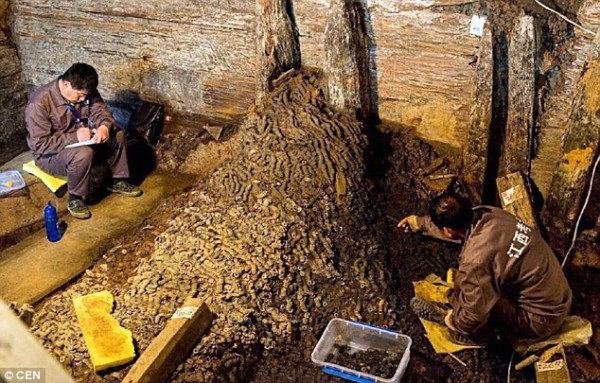 One of the greatest Chinese dynasties was the Han Dynasty.  The Western Han ruled from 206BC to 24AD, and the Eastern Han were in power from 25AD to 220AD.  The Han saw twenty-four emperors, most of whom contributed significantly to these years being a period of peace and prosperity. In terms of civilization, it paralleled, and in many ways exceeded, its western contemporaries, the Greeks and Romans.

This dynasty saw the advent of paper-making, and though it was not used extensively for writing the dynasty left us hundreds of documents inscribed on wooden tablets and bamboo strips.  Some of the documents include mathematical problems and government records including the oldest surviving region-wide census of the inhabitants of the region. The census reported that in 2 AD there were 57,671,400 people living under the Han.

The largest and most detailed history of China was written by Sima Qian.  This book, Records of the Grand Historian, covered two thousand years of Chinese history and, today, provides a fascinating insight to the world as it was then. Chinese calligraphy was developed into an art.  Engineering inventions included the waterwheel, seed drills, improved ploughs, the astrolabe, and seismometer.  Maps and cartography were in existence as were improved farming methods, including the rotation of crops.  This dynasty brought prosperity to the people and only failed because of natural causes.   The area was hit by a massive flood, and approximately nine and a half million people living in the path of the water were left devastated.  With no food and no means of producing it, banditry flourished; by 21 AD a general state of anarchy brought the Western Han dynasty to its knees.

These ancient Chinese believed that when a person died they were to be interred with all the goods required for the afterlife.  In the Xinjian District of China, archaeologists have located a complex of eight tombs. It is believed that the main tomb is that of Liu He, the grandson of one of the greatest Han emperors, Emperor Wu. The secondary tomb is thought to be that of Liu’s wife.  The complex covers a staggering forty thousand square feet, with walls measuring nine hundred meters long. 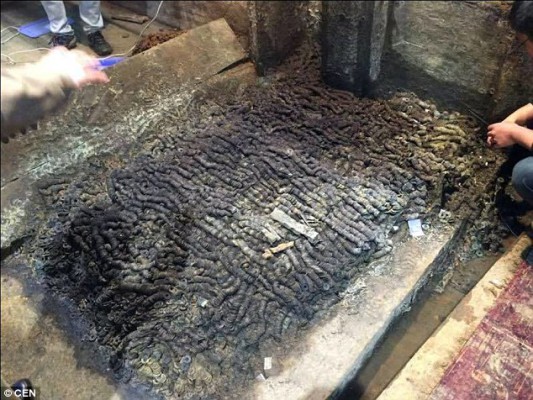 It is hoped the discovery – which also includes 10,000 other gold, bronze and iron items, chimes, bamboo slips, and tomb figurines – may now shed more light on the life of nobility from ancient times. Image credit @CEN

Researchers have been excavating on this site for five years, and have unearthed more than ten thousand gold, bronze, and iron artefacts, along with bamboo strips and pottery tomb figurines.  The figurines were intended to represent servants and other people the deceased would need to serve him in the afterlife.   Also located was a chariot burial pit.  With the death of a nobleman or member of a royal house, and the belief that the deceased needed to take with him those items he required in the afterlife, his chariots would accompany him into the afterlife.  Often the chariots were placed in a specially prepared pit. The horses that drew his chariots in life would be slaughtered and carefully arranged in his tomb. His slaves and those associated with driving the chariot were killed, or sometimes interred alive, to accompany their master to the spirit world.

The most remarkable find within the tomb complex is the two million copper wuzhu coins that weigh in at around two tons.  A feature of these coins is the square hole in the centre of the coin.   This hole fulfilled the purpose of allowing the coins to be strung on a string or stick, a thousand at a time, making them easier to transport. When full, these strings equalled one tael (1.3 ounces) of pure silver.  One legend tells that ancient people believed that heaven was round and the earth was square, thus the round coin represents heaven and the square shape in the middle represents the earth.  Experts believe that, at the time, these coins would have been worth the equivalent, in today’s money, of more than a million U.S. dollars.  A royal fortune indeed. 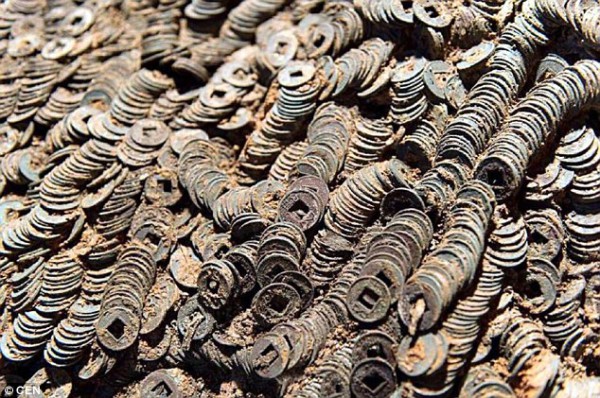 The ancient money, which bears Chinese symbols, characters, and a square hole at its centre, were found at a dig site in the Xinjian District in the city of Nanchang, capital of East China’s Jiangxi Province. Image credit @CEN

The Chinese people started using coins for currency as far back in time as three thousand years ago.  During the Shang dynasty cowrie shells were used as a form of currency, but with the expansion of the economy these shells became more and more in demand, until natural shells were no longer plentiful enough.  The Chinese then started to produce bronze shells, which were clearly identifiable in terms of size, shape, and weight.  The appearance of these imitation shells marked the start of metal coins.  The rapid boom of the economy over in the period from 770 BC to 221 BC demanded the production of coins, and in this period coins imitated items of general life such as knives or spades.  In fact, these coins were often melted down and turned into a knife or spade, and when the owner needed coins they were melted again and converted back to coins.  In 221 BC, China’s first emperor Qin Shi Huang Di reformed the monetary system. He replaced the coins that carried illegible marks, were worth dubious values, and were of various weights and sizes, with standardized coins that had an explicit weight and value.  Since then the round coin with a hole in the centre was adopted, and used for many thousands of years until the mid-17th century.  The explicit size and shape of the coin was reformed by other emperors, but the basic tenet of the coin remained the same. This tomb, with its magnificent funeral offering of coins, will help archaeologist to understand better the lives of Chinese nobility from thousands of years ago – a civilized and educated people that have contributed so many things that we take for granted today.

« HMS Bounty: 15 of the 16 crew members were found
Sealed since WWI, X-ray images reveal the box full of tins of sweets a gift to the soldiers on the Western Front »