Sealed since WWI, X-ray images reveal the box full of tins of sweets a gift to the soldiers on the Western Front 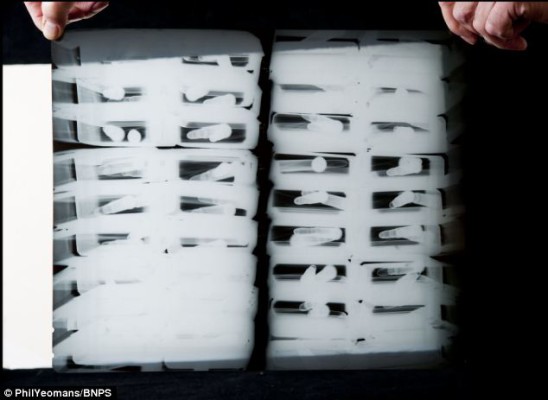 Who said that soldiers fighting during World War I didn’t get Christmas gifts?  Thousands of small Christmas gifts were shipped off to the soldiers by Britain’s Royals in 1914.  The tins and Christmas gifts were paid for by the Sailors and Soldiers Christmas Fund, which had been brought to the public’s attention nationwide.  George V’s daughter, Princess Mary, had organized and put forward tons of donations through the fund.  All of the tins contained something different.  While one tin contained sweets and chocolates, another tin might have been initialed with cigarettes and pencils.

It’s thought that there were over 300,000 boxes sent in the year 1914 alone.  However, with so many donations and issues with the postal service, some soldiers did not get their boxes until 1916.  Princess Mary’s organization ended up sending 200,000 pounds worth of donations.  The fund was able to send out nearly 2.5 million boxes to the fighting men.

One unopened box which was supposed to be shipped nearly 100 years ago has been put up for auction.  The collector who bought it for 30,000 pounds said that he believed the box contained some kind of gifts.  But he didn’t want to ruin the packaging, so he had the box X-rayed to confirm his theory.  The X-ray did not disappoint him.  It showed over 100 tins that were supposed to have been distributed among the British soldiers on the Western Front.  Through the X-ray, the tins showed up along with chocolates, cigarettes, and other sweets contained in them.

The auctioned box was originally found in Ireland and will be opened publicly by Lady Emma Kitchener, who is the great-grandniece of a military great, Lord Kitchener.  She will open it at the Chalke Valley History Festival in Salisbury, Wiltshire.  Some of the tins that are in the box will be sold at the festival for 300 to 500 pounds each.  The rest of the items will then be auctioned off in Onslows’ Great War sale in Dorset.  All money earned from the festival and auctions will be donated to service charities. 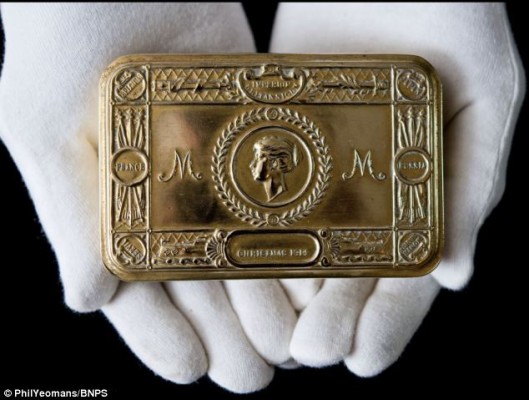 Hidden treats: The scan showed the box was stuffed to the brim with the Christmas gift tins, pictured, which contained a Christmas card, sweets and chocolate.

One man from Onslows’ auction, Patrick Bogue, said that after Princess Mary’s campaign became successful, the tins were hurriedly put together due to the fact everyone thought the war would be short.  However, as we now know, the war lasted much longer than anticipated.  So, after finding out that Christmas had passed and the war was still being fought, the donors kept shipping the boxes, some of which ended up reaching young soldiers and nurses as well as the men actually at the battle lines.

Bogue said that it is interesting that the package ended up in Ireland and why it came to be unopened after all of this time.  He said that since there could potentially be cigarettes inside, it is a wonder that nobody had checked it out.

The X-rays show that the tins in the box are real because of the initials on them. There are about 81 bronze tins in total.  In the first Christmas boxes sent out in 1914, each tin also contained a Christmas card. 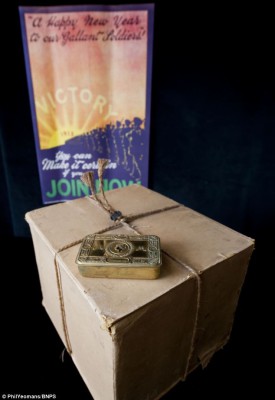 100 years: The box will finally be opened later this month by Lady Emma Kitchener at the Chalke Vallye History Festival in Salisbury. A number of the tins will be auctioned off for £300 – £350 during the event – with the proceeds going to charity.

These boxes proved to be more than just a thoughtful gift.  At the beginning of the war, soldiers were allowed to have 10 ounces of meat and 8 ounces of vegetables.  After the supply lines across Europe were disrupted, the men had to have less portions to save the supplies.   In 1916, the meat ration was down to 6 ounces a day and toward the end of the war, the soldiers were lucky to get meat every nine days.  Some say that it was such a desperate time that the men ate meat from the horses that were killed during battle.  With having to eat food like this every day, the sweets and chocolates from the tins proved to be one of the best “meals” the soldiers had until the war finally ended.