How the West became wired – over 155 years ago, the first transcontinental telegraph was completed 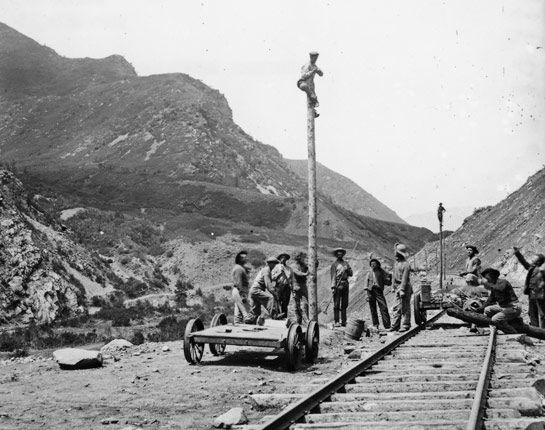 In today’s world technology is just taken for granted.  Nobody bats an eye when a new phone, TV, or tablet comes out, and there are dozens of way to socialize, including the Internet and cell phones.

Over 155 years ago, the first transcontinental telegraph was completed.  The telegraph stretched from sea to sea and it came at a good time, bringing people closer together.  This completion came at the same time the North and South were winding down the Civil War.  Many Americans who got to test out the telegraph firsthand realized what a breakthrough it was.  It could enhance national identity and change lives.

Amy Fischer, an archivist for Western Union, said that there were telegraph lines running across mountains, canyons, and even tribal lands to make connections. She said that the Civil War had just ended only months before and people were in awe that someone from California could talk to someone in Washington or even the East Coast.  On October 24, 1861, California’s chief justice, Stephen J. Field, wired a message from San Francisco to President Lincoln, all with the touch of one button.  His message to Lincoln was a congratulations for the telegraph’s completion that day.

Some would say that the transcontinental telegraph was equivalent to a long-distance tin can attached to strings.  However, while an invention like that might seem lame today, it still meant a lot as a step forward for Americans nationwide in its time.  Just several years after the nation was first wired, telegraph technology was extended all throughout North America.  There were cylindrical wires that ran from Mexico to Canada, redefining the means of communication which could eventually mean that business could be done from different states as money could be wired from Washington.  News was finally about to travel fast; in 1869 the final track that connected the transcontinental railroad was laid in Promontory, Utah, and The Associated Press sent the story out on the wire.

Telegraph historian Thomas Jepsen believes that the transcontinental telegraph is what started our journey toward technology.  If it wasn’t for this invention there would be no telephone, no teletype, no fax, or no internet.  The telegraph could even be considered a greater influence on communication than the Internet. 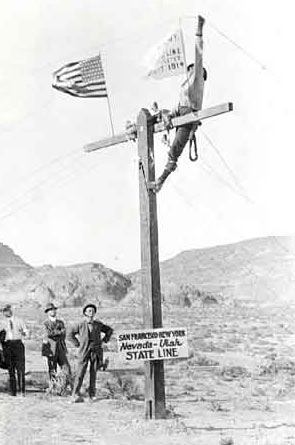 Sadly, new inventions also sound the death knoll for some businesses. The transcontinental telegraph ended up putting the Pony Express out of business due to the cost-effectiveness of the telegrapher’s key.  When the Pony Express first started it had promised people that a letter could be delivered from Sacramento to St. Joseph, Missouri in just 10 days, which was a record for that time.  However, it was only in the works for nine months from it’s start on April 3, 1860 to when the telegraph was used for the first time.  Even though the Pony Express could have had a small chance at surviving as a business, the telegraph was able to connect and do business nationally and more quickly. 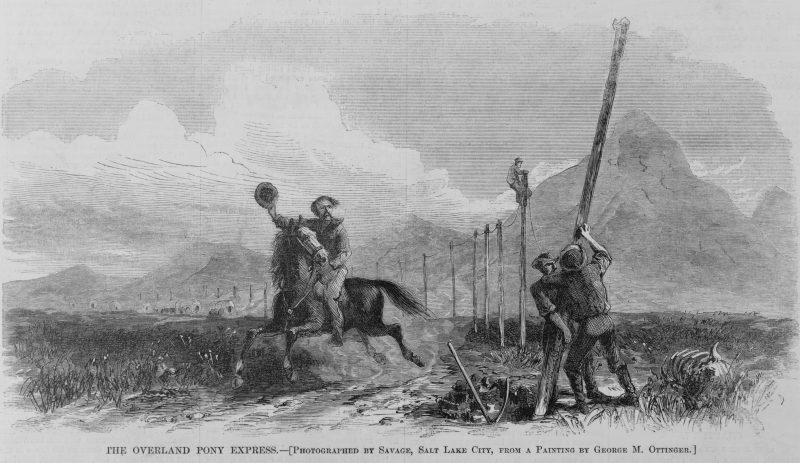 In this 1861-dated artist’s rendering, a pony express rider greets Western Union linemen as they string wires of the first transcontinental telegraph

Like Steve Jobs, who was instrumental in today’s new technology, Samuel F.B. Morse was a guru – of the telegraph.  Morse had a patent for his telegraph in 1840 and four years later he sent his first famous message from Washington to Baltimore.  In 1845, there was a man named John Tawell who was arrested in England for murdering his mistress after the police received a telegraph tip.  A year after that, the Associated Press was used for relaying news on the Mexican-American War through telegraph wires.

In 1860, the telegraph went only as far west as Omaha, Nebraska.  The Pacific Telegraph Act, in the first government policy concerning telecommunications, was able to change that limitation.  When the bill passed, the government hired a company that could extend the lines, finally linking the west with the rest of the country.  In order to build those lines, construction crews had to convince local tribes to let them put up the lines. They gave the Native Americans gifts and offered to hire some of the tribe’s members. 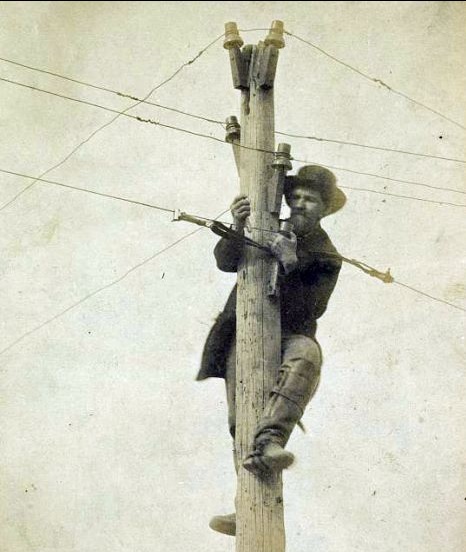 A repairman in 1863 working on a telegraph line

Since there was so much desert terrain in Nevada, there had to be lumber to build the lines.  It took over 200 oxen and longer than a month to haul lumber across the Sierra Nevada.  When the workers finally got the lumber, they hired around-the-clock guards, sometimes Native Americans, to ensure it would not get stolen, because of the high demand for wood for making houses in that area.

Another problem that the workers came across was that the poles were made so small that the buffalo in the area would scratch on them and knock them over. 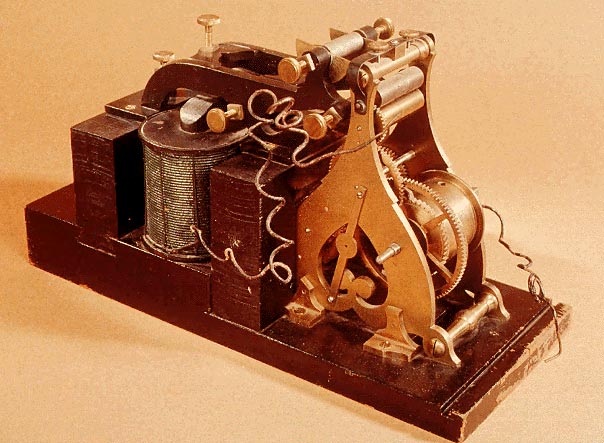 The Morse-Vail telegraph register, the first telegraph instrument which was used to receive the message ‘What Hath God Wrought’ on the experimental line between Washington DC and Baltimore

Having the telegraphs gave people new jobs relaying thousands of messages and information.  New terms were created; for example, the number 73 meant goodbye and number 30 was meant to be placed as a period. These abbreviations were created so that longer messages wouldn’t jam up the wire.  Morse Code was once used to keep track of ships at sea and prevent trains from colliding.  Few people today know Morse Code anymore, as it’s fallen out of use.

The telegraph was where it all started and it’s not hard to understand how without it we could still be living in a world without Internet.