The extraordinary mad genius, Salvador Dali was the idiosyncratic mastermind of surrealism. He presented his world through art with  an odd yet contemplative and genius approach. Dalí attributed his “love of everything that is gilded and excessive, my passion for luxury and my love of oriental clothes” to an “Arab lineage”, claiming that his ancestors were descended from the Moors.

“At the age of six I wanted to be a cook,”  Salvador Dali wrote in his autobiography. “At seven I wanted to be Napoleon. And my ambition has been growing steadily ever since.”

Dalí built a repertoire in the fashion and photography businesses as well. His cooperation with Italian fashion designer Elsa Schiaparelli was well-known, when Dalí was commissioned to produce a white dress with a lobster print. Other designs Dalí made for her include a shoe-shaped hat, and a pink belt with lips for a buckle. He was also involved in creating textile designs and perfume bottles. In 1950, Dalí created a special “costume for the year 2045” with Christian Dior.

Mayoral Galeria d’Art in Barcelona is  holding an exhibition with a selection of six fashion drawings by Dali, reminding the fans of the time the genius gravitated towards fashion. All six fashion drawings were done in 1965, for Wisconsin clothing manufacturer Jack A. Winter to design a line of beachwear, sportswear, swimwear and autumnal styles.

The beautifully weird clothing line was never mass produced, so the world was unable to savor the magnificent design of accordion-shaped onesies, ridiculously small denim bikini and  pants with a décolletage.

But you can see them below! 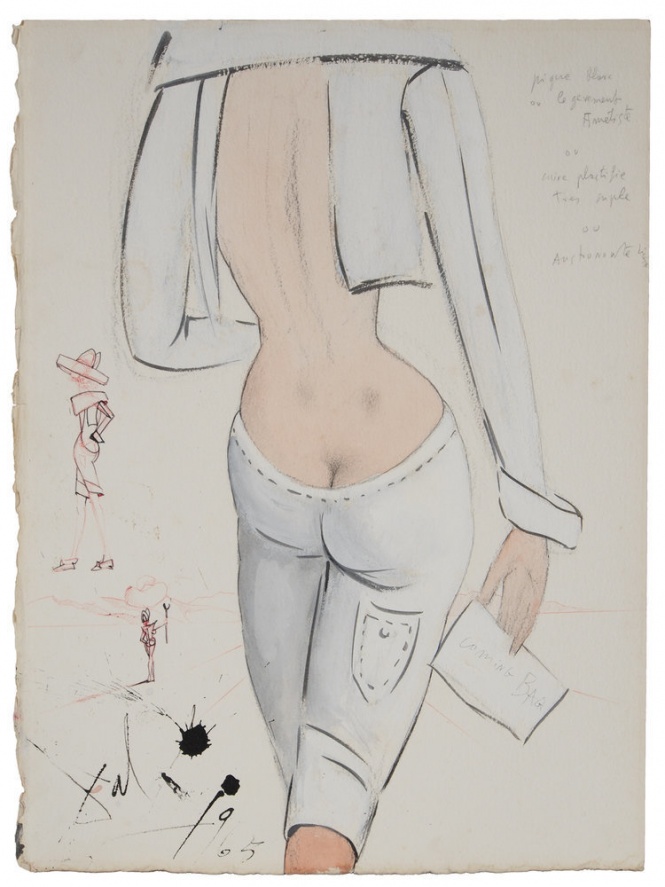 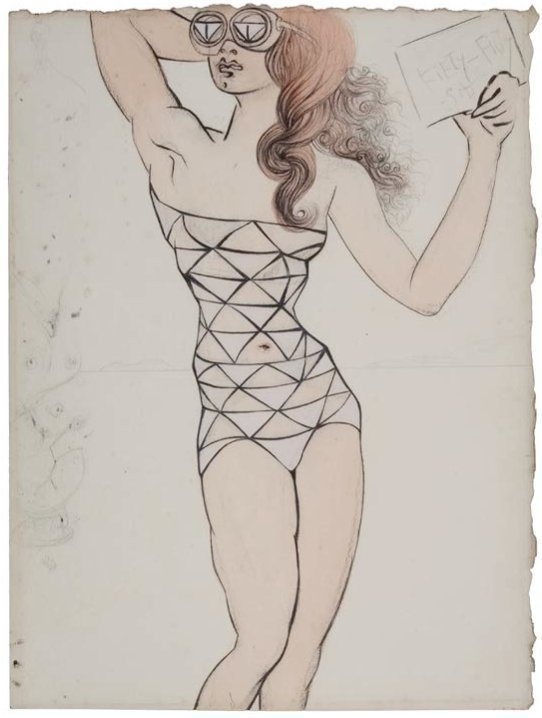 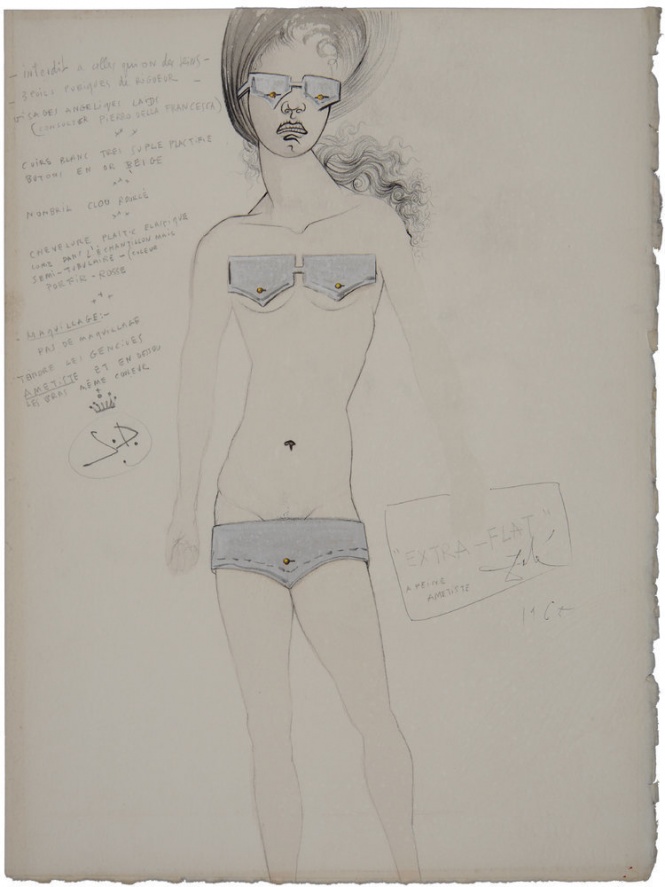 Photographers with whom he collaborated include Man Ray, Brassaï, Cecil Beaton, and Philippe Halsman. With Man Ray and Brassaï, Dalí photographed nature; with the others, he explored a range of obscure topics, including (with Halsman) the Dalí Atomica series (1948) — inspired by his painting Leda Atomica — which in one photograph depicts “a painter’s easel, three cats, a bucket of water, and Dalí himself floating in the air.” 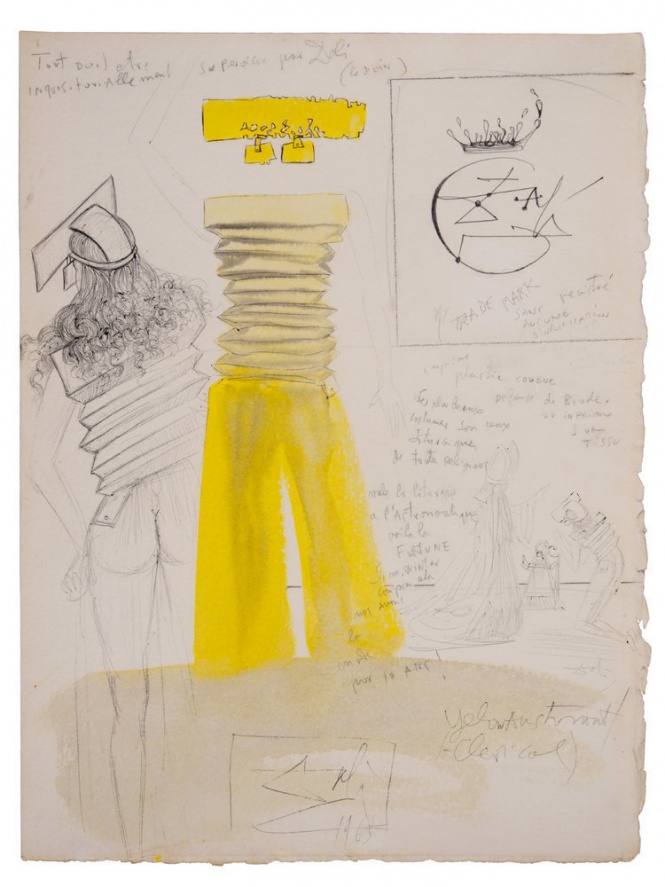 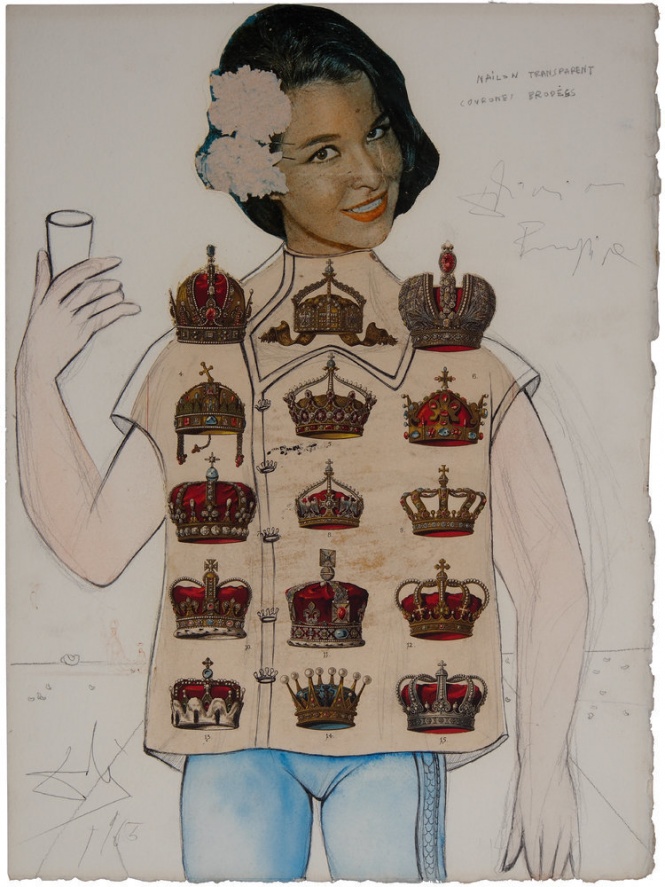 One of Dalí’s most unorthodox artistic creations may have been an entire persona, in addition to his own. At a French nightclub in 1965, Dalí met Amanda Lear, a fashion model then known as Peki D’Oslo. Lear became his protégée and muse, later writing about their affair in her authorized biography My Life With Dalí (1986).Transfixed by the mannish, larger-than-life Lear, Dalí masterminded her successful transition from modeling to the music world, advising her on self-presentation and helping spin mysterious stories about her origin as she took the disco-art scene by storm. According to Lear, she and Dalí were united in a “spiritual marriage” on a deserted mountaintop.She was referred to as Dalí’s “Frankenstein,” and some observers believed Lear’s assumed name was a pun on the French phrase “L’Amant Dalí”, or “Lover of Dalí”. Lear took the place of an earlier muse, Ultra Violet (Isabelle Collin Dufresne), who had left Dalí’s side to join The Factory of Andy Warhol. 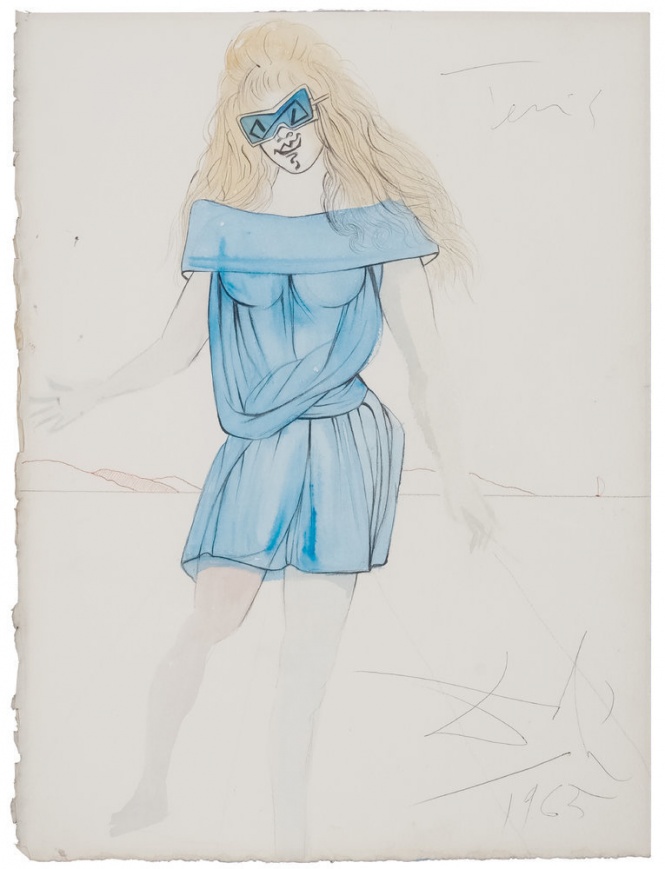 « Wonderful Vintage photos glimpse into everyday life in Zambia in the days of yore
Criminals during the First World War – A collection of 35 vintage mugshots in North Shields, England »