This is the oldest known footage of Chicago and is the coolest thing!

“The Oldest Footage of Chicago,” is a spectacular video showing a collection of the earliest motion picture made in Chicago from 1896-1935.

Yestervid did an outstanding job finding and compiling this ” historic gem,” and  giving it a neat geographical context. The video  includes dates and maps showing precisely where the camera was placed.

Featured by typical Chicago-styled tunes, this video shows archive footage of  Theodore Roosevelt, Al Capone and recently discovered footage of the SS Eastland disaster on the Chicago River in 1915. 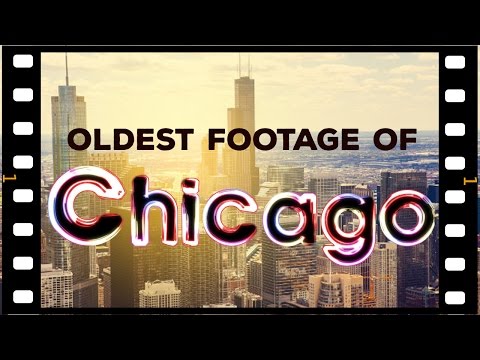 The history of Chicago,  has played a central role in American economic, social, cultural and political history and since the 1850s has been the dominant Midwest metropolis. The area’s recorded history begins with the arrival of French explorers, missionaries and fur traders in the late 17th century and their interaction with the local Potawatomi Indians.

The name “Chicago” is derived from a French rendering of the Native American word shikaakwa, translated by some sources as “wild leek” or “wild onion” or “wild garlic”, from the Miami-Illinois language.The first known reference to the site of the current city of Chicago as “Checagou” was by Robert de LaSalle around 1679 in a memoir.[Henri Joutel, in his journal of 1688, noted that the wild garlic, called “chicagoua”, grew abundantly in the area.Other sources say place of the skunk.

There were small settlements and a U.S. Army fort, but the soldiers and settlers were all driven off in 1812. The modern city was incorporated in 1837 y Northern businessmen and grew rapidly from real estate speculation and the realization that it had a commanding position in the emerging inland transportation network, based on lake traffic and railroads, controlling access from the Great Lakes into the Mississippi River basin. Despite a fire in 1871 that destroyed the central business district, the city grew exponentially, becoming the nation’s rail center and the dominant Midwestern center for manufacturing, commerce, finance, higher education, religion, broadcasting, sports, jazz, and high culture. The city was a magnet for European immigrants—at first Germans, Irish and Scandinavians, then from the 1890s to 1914, Jews, Czechs, Poles and Italians. They were all absorbed in the city’s powerful ward-based political machines. Many joined militant labor unions, and Chicago became notorious for its violent strikes, and high wages. Large amounts of African Americans migrated from the South in starting in the World War I era as part of the Great Migration. Mexicans started arriving after 1910, and Puerto Ricans after 1945. The Cook County suburbs grew rapidly after 1945, but the Democratic party machine kept both the city and suburbs under control, especially under mayor Richard J. Daley, who was chairman of the Cook County Democratic Party. Deindustrialization after 1970 closed the stockyards and most of the steel mills and factories, but the city retained its role as a financial and transportation hub. Increasingly it emphasized its service roles in medicine, higher education and tourism. The city formed the political base for national leaders of the Democratic Party, especially Stephen A. Douglas in the 1850s, Adlai Stevenson in the 1950s, and Barack Obama in recent years.

« Sarcophagi Found in Italy Remained Intact for Over 2,000 Years
30 Color Photos show Dublin, Ireland back in 1961 »