4 wacko design concepts for nuclear-powered vehicles from the 1950s

Today, the usage of nuclear power is limited to huge land-based power plants, ships, and nuclear submarines. In recent years, nuclear reactors are also used to power up some of the robotic probes that we send out into space. But, ago, at the peak of the atomic age, people envisioned a wider use of atomic energy. Designers and engineers were coming up with all sorts of nuclear-powered technologies that could make life easier and move humanity into a new era. The concepts for nuclear-powered vehicles are among the most interesting. In this time of nuclear optimism, engineers, designers and futurists around the world were working to create the perfect transportation nuclear transport vehicle of the future. All sorts of crazy ideas appeared every day. Some of them were goofy and some of them were more down-to-earth. One thig is certain, the future from the perspective of the mid 20-century looked really cool, elegant and… radioactive… The predictions from that period the time never completely fulfilled and people soon realized that nuclear energy is not something to be played with. We don’t see nuclear-powered cars on the streets today, or atomic planes in the air, but here are a few concepts that could have been a part of our everyday life if things didn’t go the wrong way. 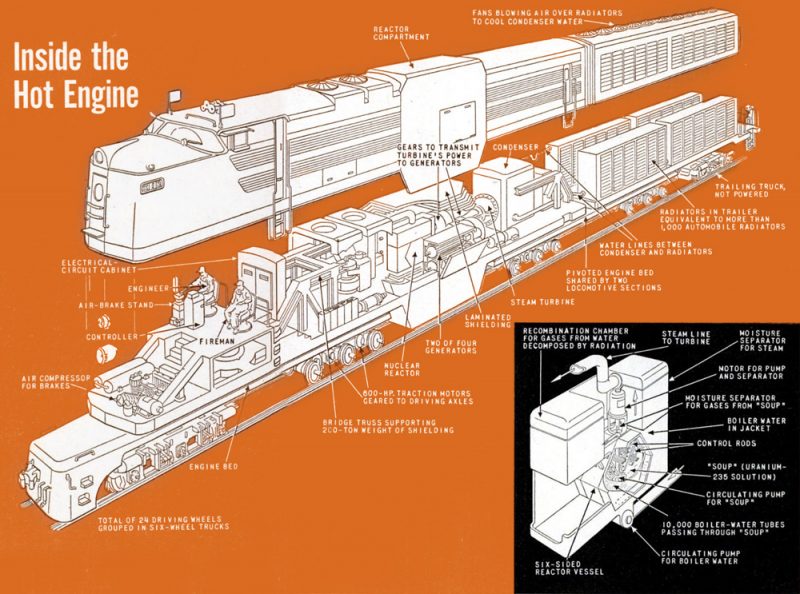 This idea comes from Dr. Lyle B. Borst, a physics professor at the University of Utah who had formerly been a reactor designer with the Atomic Energy Commission. In 1954, he and his students in the Nuclear Technology course made a detailed study and submitted patents for an atomic locomotive. The name of the project was  X-12. The developed this amazing idea together with the Association of American Railroads and several industries, including GM, Commonwealth Edison, Trane, GE, and Westinghouse. Looking at the names involved in this, it was a pretty serious project, but unfortunately (or fortunately), the locomotive was never built.

If the X-12 was made it would have been a  360 tons heavy and 160 feet long piece of machinery.  The huge length of the locomotive means that the engine would probably have to be divided into two parts and then connected with a flexible hallway. The scientists were planning to use fissionable U-235 as nuclear fuel for the reactor. This fuel would have been contained in a 3 feet long and a foot in diameter tank, with a 200-ton shield around it. The locomotive was supposed to run on four steam-powered generators, producing 7000 hp. The 65-foot was reserved for the radiators required to cool this beast (the equivalent of 1000 car radiators).

According to Dr. Borst, the price tag of the X-12 would have been $1.2 million. He estimated that the locomotive would be able to run for 1 year without U-235 refueling. We’ll never know if this was a practical and safe vehicle. 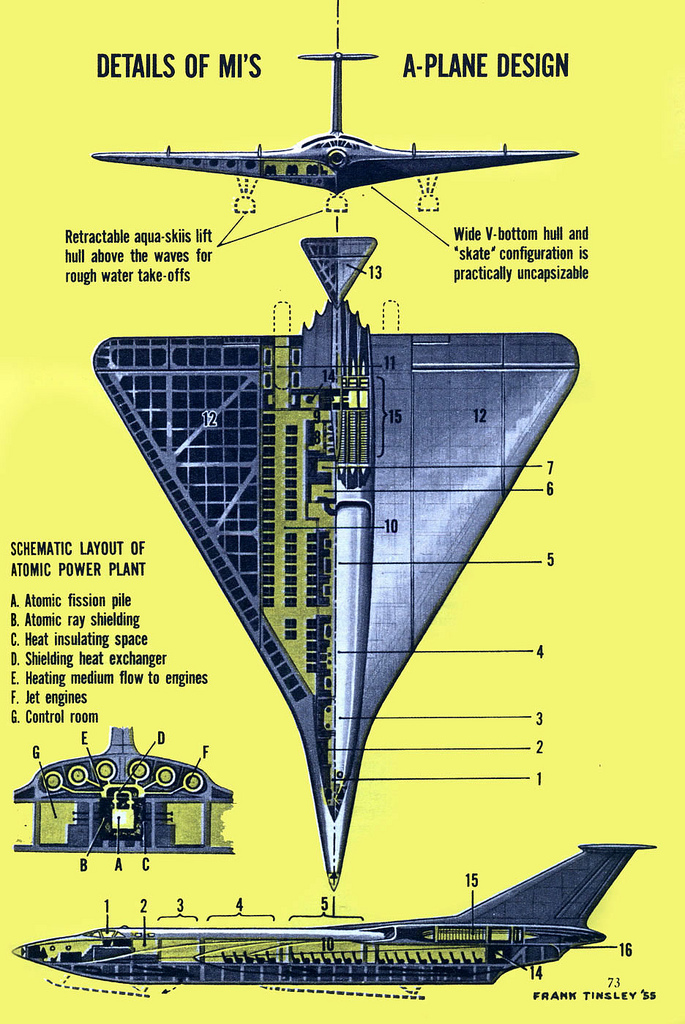 This A-plane concept comes from a 1955 issue of Mechanix Illustrated, and it is actually a flying-boat and not a landplane. The designer of this model (Frank Tinsley) explains the superiority of the flying boat over the normal landplane. One of the benefits is the lack of landing wheels and, therefore, increasing the weight limit of the vehicle. The designer admits that the boat hull is structurally heavier than the landplane fuselage, but it is still a lot lighter than the fuselage-plus-wheels. He also considers the fact that the nuclear fuel for this plane will only weigh half a pound, so the A-plane will have the same weight on taking off and landing (this is not the case with standard aircraft). Another reason mentioned by the author is the runway length that would be required for a plane this size. He proposes a cheaper solution, a water base for planes, with virtually “limitless” runway close to city docks and an opportunity for passengers to debark very close to town centers (instead of classic airports that are usually out of town).

Tinsley considered this design as perfect for an atomic passenger plane because of the wide hull and deep, blended-in wings. He describes it as a first class luxury plane with comfortable seatings for 192 passengers. The seats are positioned facing the back of the plane for safety in case of rough water landings. This atomic plane would also have a lounge salon, a bar, a restaurant, a library and conference rooms. All of these facilities make this plane a true flying hotel.

The nuclear reactor in this design is situated in the back of the plain, in he tail section, far from the passengers. The jets of the plane (which function more or less like the usual ones) are powered by the nuclear heat provided by the reactor. The plane is based on a closed-circulation system.

The author ends with a prediction: “You’ll be riding in them within ten years. Atomic planes are closer than you think!” (modernmechanix) Apparently, we still have to wait for a ride in one of these.

It is interesting to mention that, both USA and USSR have made efforts to build  functioning nuclear-powered planes, but without much success. Both projects were terminated due to expensiveness and high environmental risks. 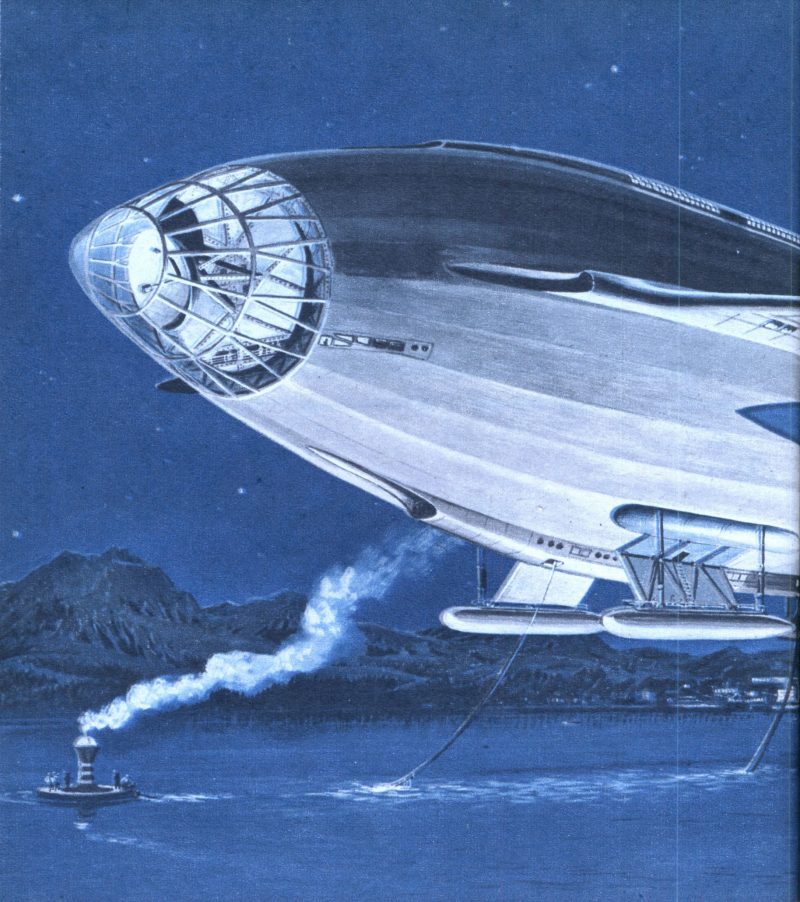 One more beautiful design from Frank Tinsley made for the Mechanix Illustrated in 1956. This time, he explores the possibility of making a nuclear-powered blimp. He bases his design on previous examples developed by Zeppelin, Eckener, and Arnstein. This new airship would have had a few upgrades and it would have used modern materials that were available at that period. Materials like titanium, magnesium and fiberglass are mentioned as suitable for construction because of their strength and durability.

Among many nuclear powerplant possibilities, the designer and his team at MI chose a midship atomic steam plant using turbines to generate electricity. This reactor is suitable because it is relatively lightweight. The electricity produced in the generator is carried out to the stern of the ship, where a huge, four-bladed, reversible propeller is powered up to move the blimp. For landing and take-off maneuvers, the designers envisioned ducted fans in the forward and after stabilizers.

The passengers accommodations of MI’s Atoms-For-Peace dirigible is similar to other models (like the Hindenburg). Rooms and promenade decks are situated in the lower hull and bottom keel. The only difference is a central exhibition area which would have been used for promoting peaceful atomic age technology. 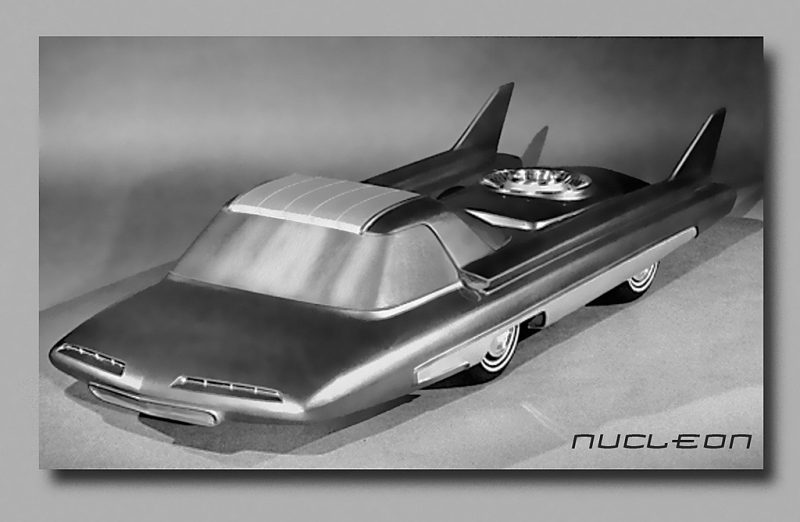 The picture above shows a 3/8th-sized scale model concept for a nuclear-powered car made by Ford designers in 1958. The Ford Nucleon only existed as a design and engineering concept. Its development never went further from the drawing table.

This was probably one of the first ideas for a car powered by a nuclear reactor (uranium fission-heated twin steam turbines). The engineers imagined that the Nucleon would be able to go 5,000 miles without refueling. However, nuclear technology never developed to a point at which a suitable high-powered and compact reactor could be created. Another major issue was passengers safety. Imagine the shielding needed to protect people inside the car from being bombarded by lethal levels of radiation. And besides this, the thought of millions of nuclear-powered cars driving on the roads around the world sounds pretty catastrophic.

Ford engineers took the cab-over configuration of a van or over-the-road truck as a basis for the design. A single molded piece of glass at the front offers maximum forward visibility for the driver. The air intakes at the sides of the cab were supposed to draw enough air for the cabin, and also, cool down the nuclear reactor in the back of the vehicle. The energy produced by the nuclear reactor was going to be transformed into electricity and used to drive the wheels with the help of electronic torque converters.