Once a lavish royal fortress, Corfe  Castle  now is a crumbling ruin sitting atop the rugged hills above the village of the same name on the Isle of Purbeck in the English county of Dorset.

Built by William the Conqueror, the castle dates back to the 11th century and commands a gap in the Purbeck Hills on the route between Wareham and Swanage. The first phase was one of the earliest castles in England to be built using stone when the majority were built with earth and timber. Corfe Castle underwent major structural changes in the 12th and 13th centuries.

Corfe Castle was built on a steep hill in a gap in a long line of chalk hills, created by two streams eroding the rock on either side. The name Corfe derives from the Old English ceorfan, meaning ‘a cutting’, referring to the gap.The construction of the medieval castle means that little is known about previous activity on the hill. However, there are postholes belonging to a Saxon hall on the site. The hall may be where Edward the Martyr was assassinated in 978.

A castle was founded at Corfe on England’s south coast soon after the Norman Conquest of England in 1066. The royal forest of Purbeck, where William the Conqueror enjoyed hunting, was established in the area.Between 1066 and 1087, William established 36 such castles in England.Sitting as it does on a hill top, Corfe Castle is one of the classic images of a medieval castle. However, despite popular imagination, occupying the highest point in the landscape was not the typical position of a medieval castle. In England, a minority are located on hilltops,but most are in valleys; many were near important transport routes such as river crossings. 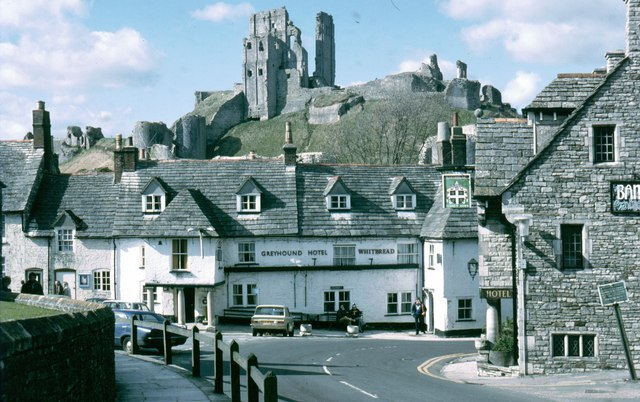 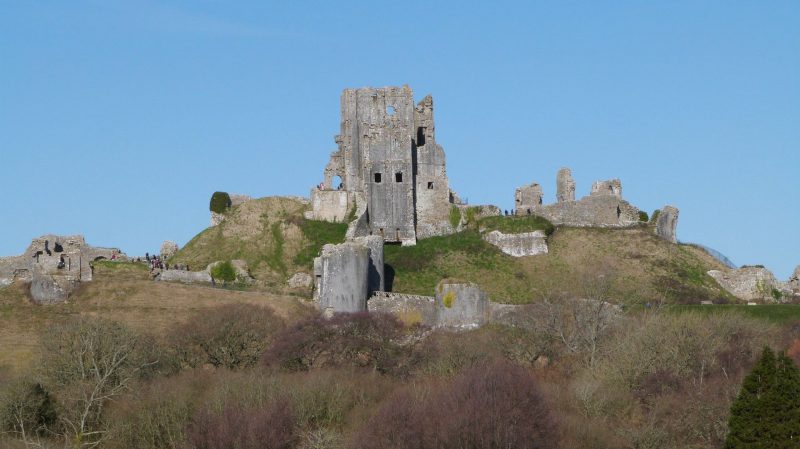 Unusually for castles built in the 11th century, Corfe was partially constructed from stone indicating it was of particularly high status. A stone wall was built around the hill top, creating an inner ward or enclosure. There were two further enclosures: one to the west, and one that extended south (the outer bailey); in contrast to the inner bailey, these were surrounded by palisades made from timber. At the time, the vast majority of castles in England were built using earth and timber, and it was not until the 12th century that many began to be rebuilt in stone.The Domesday Book records one castle in Dorset; the entry, which reads “Of the manor of Kingston the King has one hide on which he built Wareham castle”, is thought to refer to Corfe rather than the timber castle at Wareham. There are 48 castles directly mentioned in the Domesday Book, although not all those in existence at the time were recorded.Assuming that Corfe is the castle in question, it is one of four the Domesday Book attributes to William the Conqueror; the survey explicitly mentions seven people as having built castles, of which William was the most prolific. 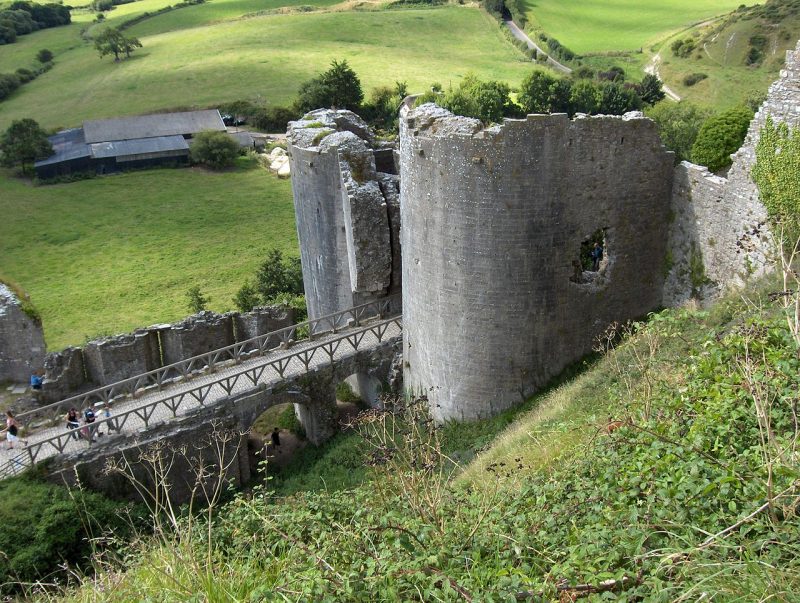 In the early 12th century, Henry I began the construction of a stone keep at Corfe. Progressing at a rate of 3 to 4 metres (10 to 13 ft) per year for the best part of a decade, the work was complete by 1105. The chalk of the hill Corfe Castle was built on was an unsuitable building material, and instead Purbeck limestonequarried a few miles away was used.By the reign of King Stephen (1135–1154) Corfe Castle was already a strong fortress with a keep and inner enclosure, both built in stone. In 1139, during the civil war of Stephen’s reign, Corfe withstood a siege by the king.It is thought that he built a siege castle to facilitate the siege and that a series of earthworks about 290 metres (320 yd) south-south-west of Corfe Castle mark the site of the fortification 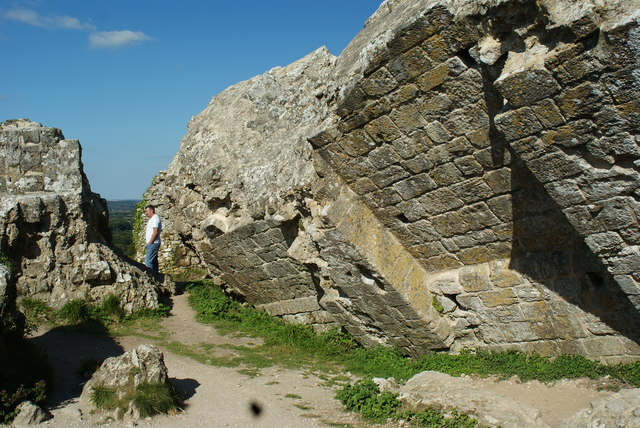 During the reign of Henry II Corfe Castle was probably not significantly changed, and records from Richard I’s reign indicate maintenance rather than significant new building work.In contrast, extensive construction of other towers, halls and walls occurred during the reigns of John and Henry III, both of whom kept Eleanor, rightful Duchess of Brittany, in confinement at Corfe. It was probably during John’s reign that the Gloriette in the inner bailey was built. The Pipe Rolls, records of royal expenditure, show that between 1201 and 1204 over £750 was spent at the castle, probably on rebuilding the defences of the west bailey with £275 spent on constructing the Gloriette. The Royal Commission on the Historical Monuments of Englandnoted the link between periods of unrest and building at Corfe. In the early years of his reign John faced lost Normandy to the French, and in further building work at Corfe coincided with the political disturbances later in his reign. At least £500 was spent between 1212 and 1214 and may have been focused on the defences of the outer bailey. R. Allen Brown noted that in John’s reign “it would seem that though a fortress of the first order might cost more than £7,000, a medium castle of reasonable strength might be built for less than £2,000”. The Pipe Rolls show that John spent over £17,000 on 95 castles during his reign spread; he spent over £500 at nine of them, of which Corfe was one. Additional records show that John spent over £1,400 at Corfe Castle 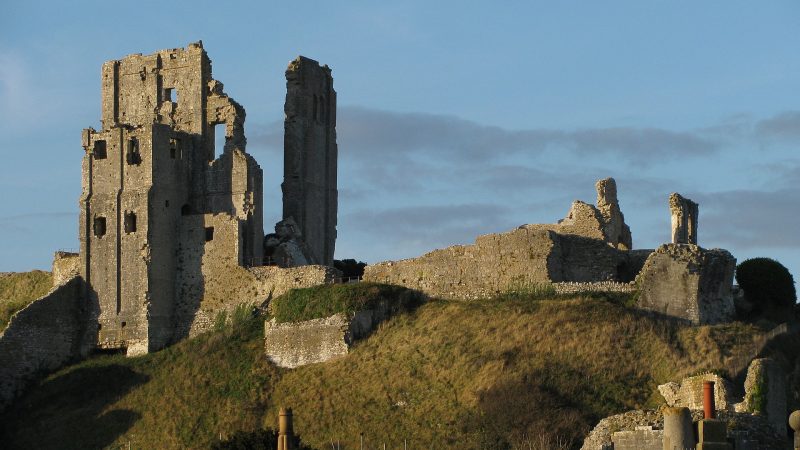 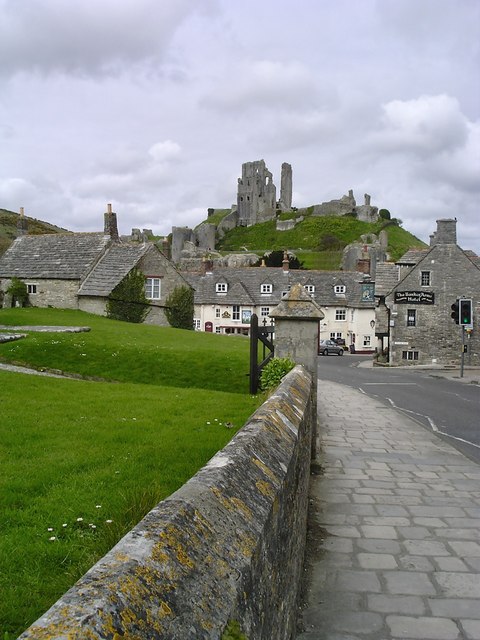 One of the secondary roles of castles was to act as a storage facility, as demonstrated by Corfe Castle; in 1224 Henry III sent to Corfe for 15,000 crossbow bolts to be used in the siege of Bedford Castle. Following John’s work, Henry III also spent over £1,000 on Corfe Castle, in particular the years 1235 and 1236 saw £362 spent on the keep.While construction was under-way, a camp to accommodate the workers was established outside the castle. Over time, this grew into a settlement in its own right and in 1247 was granted a market and fair by royal permission.It was Henry III who ordered in 1244 that Corfe’s keep should be whitewashed. Four years previously, he also ordered that the keep of the Tower of London should be whitewashed, and it therefore became known as the White Tower

The castle remained a royal fortress until sold by Elizabeth I in 1572 to her Lord Chancellor, Sir Christopher Hatton. Ralph Treswell, Hatton’s steward, drafted a series of plans of the castle; the documents are the oldest surviving survey of the castle.The castle was bought by Sir John Bankes, Attorney General to Charles I, in 1635.The English Civil War broke out in 1642, and by 1643 most of Dorset was under Parliamentarian control. While Bankes was in Oxford with the king, his men held Corfe Castle in the royal cause. During this time his wife, Lady Mary Bankes, resided at the castle with their children. Parliamentarian forces planned to infiltrate the castle’s garrison by joining a hunting party from the garrison on a May Day hunt, however they were unsuccessful. The Parliamentarians gave orders that anyone joining the garrison would have their house burned and that no supplies were to reach the castle. Initially defended by just five people, Lady Bankes was able to get food through and swell the garrison to 80. The Parliamentarian forces numbered between 500 and 600 and began a more thorough siege; it went on for six weeks until Lady Bankes was relieved by Royalist forces. During the siege the defenders suffered two casualties while there were at least 100 deaths among the besieging force. 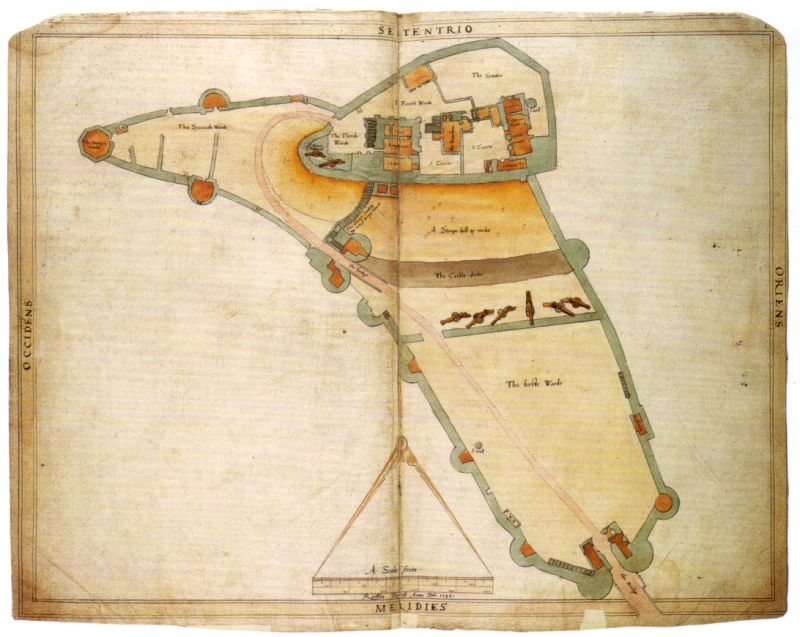 A plan of Corfe Castle from 1586, drawn up by Ralph Treswell

he Parliamentarians were in the ascendency so that by 1645 Corfe Castle was one of a few remaining strongholds in southern England that remained under royal control. Consequently it was besieged by a force under the command of a Colonel Bingham. One of the garrison’s officers, Colonel Pitman, colluded with Bingham. Pitman proposed that he should go to Somerset and bring back a hundred men as reinforcements, however the troops he returned with were Parliamentarians in disguise. Once inside, they waited until the besieging force attacked before making a move, so that the defenders were attacked from without and within at the same time. Corfe Castle was captured and Lady Bankes and the garrison were allowed to leave. In March that year, Parliament voted to slight (demolish) the castle, giving it its present appearance.[25] In the 17th century many castles in England were in a state of decline, but the war saw them pressed into use as fortresses one more time. Parliament ordered the slighting of many of these fortifications, but the solidity of their walls meant that complete demolition was often impractical. A minority were repaired after the war, but most were left as ruins. Corfe Castle provided a ready supply of building material, and its stones were reused by the villagers.

After the restoration of the monarchy in 1660, the Bankes family regained their properties. Rather than rebuild or replace the ruined castle they chose to build a new house at Kingston Lacy on their other Dorset estate near Wimborne Minster. 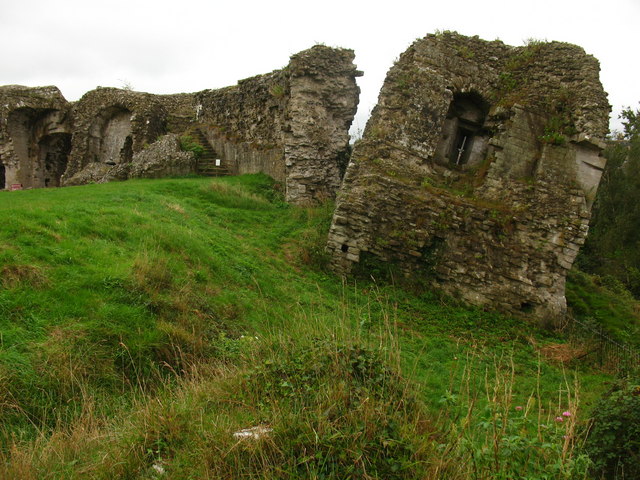 In the 1980s, Ralph Bankes bequeathed the entire Bankes estate to the National Trust, including Corfe Castle, much of the village of Corfe, the family home at Kingston Lacy, and substantial property and land holdings elsewhere in the area. In the summer 2006, the dangerous condition of the keep caused it to be closed to visitors, who could only visit the walls and inner bailey. The National Trust undertook an extensive conservation project on the castle, and the keep was re-opened to visitors in 2008, and the work completed the following year.

During the restoration work, an “appearance” door was found in the keep, designed for Henry I.The National Trust claims that this indicates that the castle would have been one of the most important in England at the time. 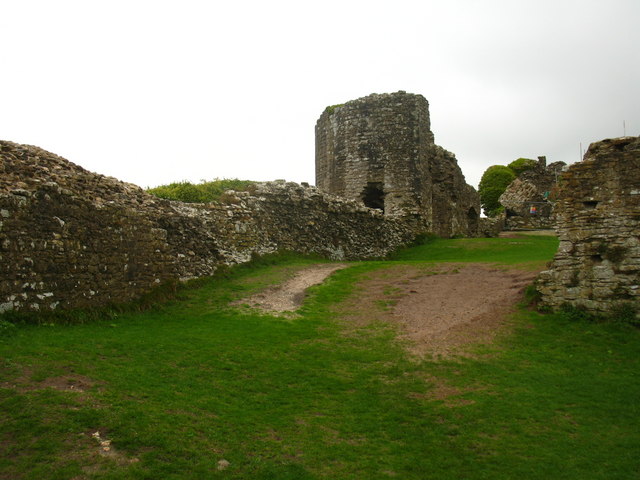 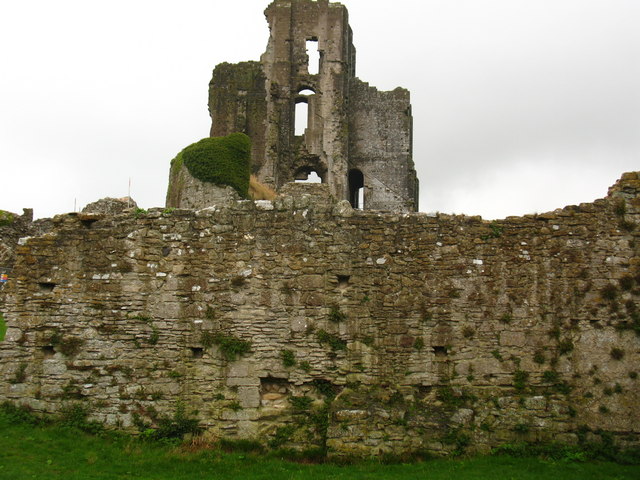 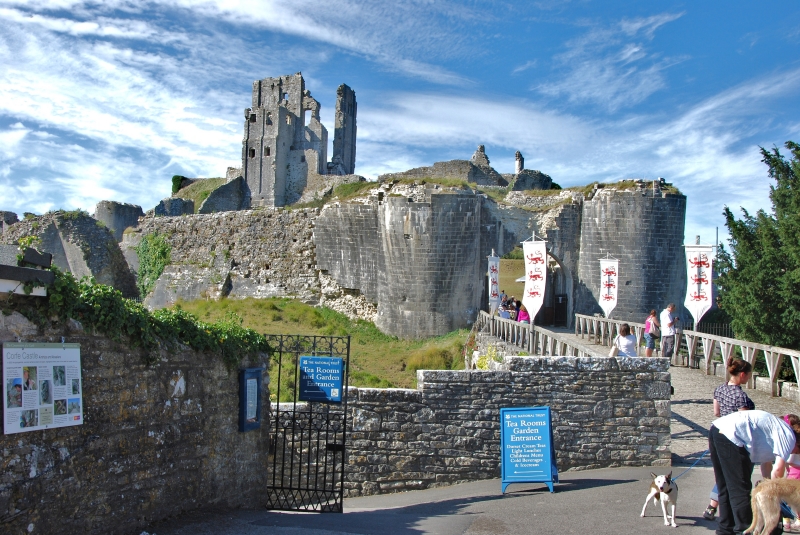 The castle is a Grade I listed building, and recognised as an internationally important structure. It is also a Scheduled Monument,a “nationally important” historic building and archaeological site which has been given protection against unauthorised change.The earthworks known as “The Rings”, thought to be the remains of a 12th-century motte-and-bailey castle built during a siege of Corfe are also scheduled. In 2006, Corfe Castle was the National Trust’s tenth most-visited historic house with 173,829 visitors. According to figures released by the Association of Leading Visitor Attractions, the number of visitors in 2010 had risen to nearly 190,000

All photos by Wikimedia Commons

« The First Subway Built in 1800s was Luxury, Taken for Granted Today
Trees that have been Standing Since Gettysburg are Being Cut Down Due to Carelessness »