When someone thinks of the word “shipwreck” they immediately picture wreckage beneath a lake or ocean. However, there are shipwrecks above water, usually from being caught in a sandbar or beached for other reasons.

Many people enjoy visiting these strange wrecks, curious about their histories and how they ended up deserted in the first place.

Here is a list of the top eight land shipwrecks you can visit today: 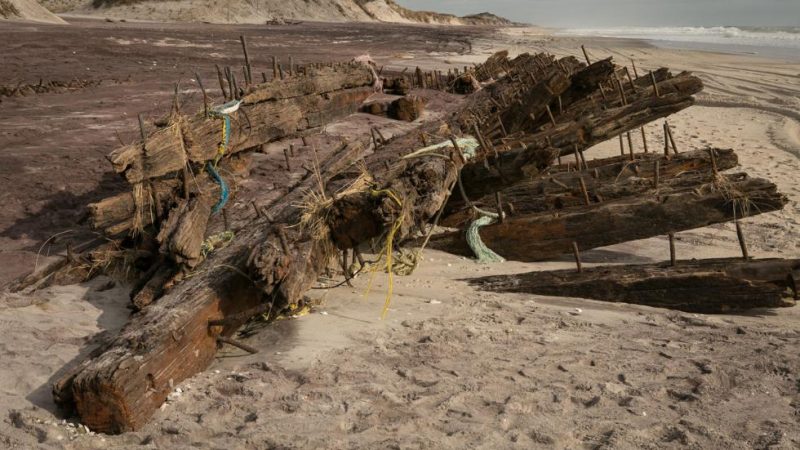 The Bessie A. White is a Canadian schooner that appears and disappears every few years from the shore on Fire Island National Seashore.

Although there is not much left of the wreckage or its history, it appears every so often, generally in major weather events. The last time it appeared was in 2012 during Hurricane Sandy. The wreckage is buried in the island’s dunes.

The ship is believed to have run aground after experiencing heavy fog around 1920. The ship’s crew members managed to escape in the two boats that were on board. A majority of the ship was salvaged but the skeleton of the hull is what sits on the beach today. 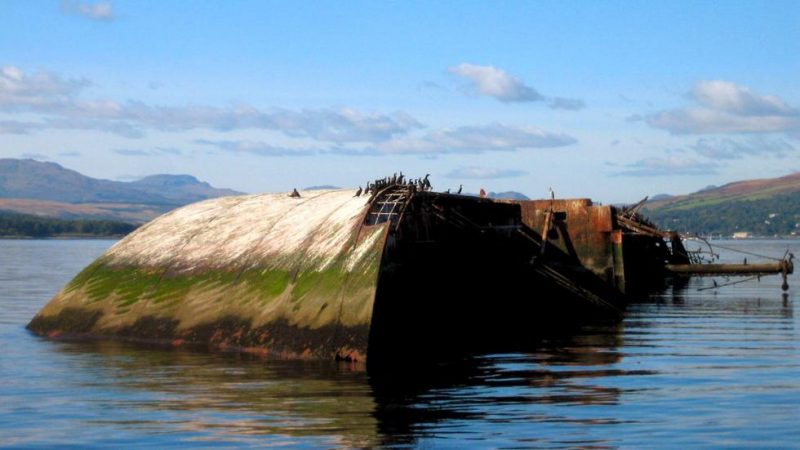 The Captayannis was a Greek sugar-carrying vessel that sank in the River Clyde, Scotland in 1974. (Flickr Stephen Thomas)

Many locals call the wreckage the “sugar boat”. It was a Greek ship that was waiting for its cargo to be taken off the ship when a storm separated the ship from her anchor in 1974. The ship then collided with a large BP tanker, putting a hole in the vessel.

Acting quickly, the captain decided to beach the ship so that it would sink on the shallow sandbar near Ardmore Point. The ship still sits where it was beached and gets many visitors yearly. A majority of the ship’s metal and valuable pieces have been removed by looters. What is left of the wreckage has become a home to the marine life and birds in the area. 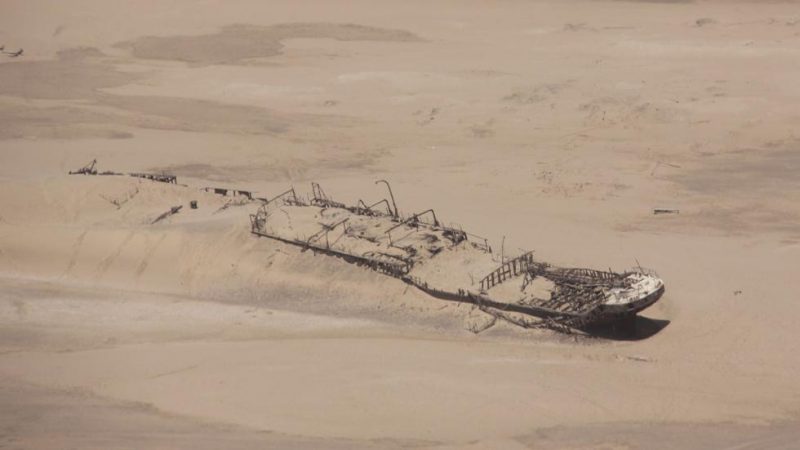 The Eduard Bohlen hit a sand bank off the coast of Namibia in 1909 Changes to the coastline have landlocked the ship since that time. (Wikimedia Laika ac

This wreckage is considered one of the most unlikely shipwrecks ever. It lies buried in desert sand near Namibia’s Skeleton Coast.

The cargo ship belonged to Germany when it was afloat on the coast in 1909, but it ran aground on a sandbar when it encountered a patch of thick fog. The shifting sands of the coast soon took over the ship, almost covering it completely. The ship now sits almost a quarter mile inland and in a remote area in the desert. One must be brave in order to visit the wreckage. It is best if visitors go in a group so nobody gets lost. 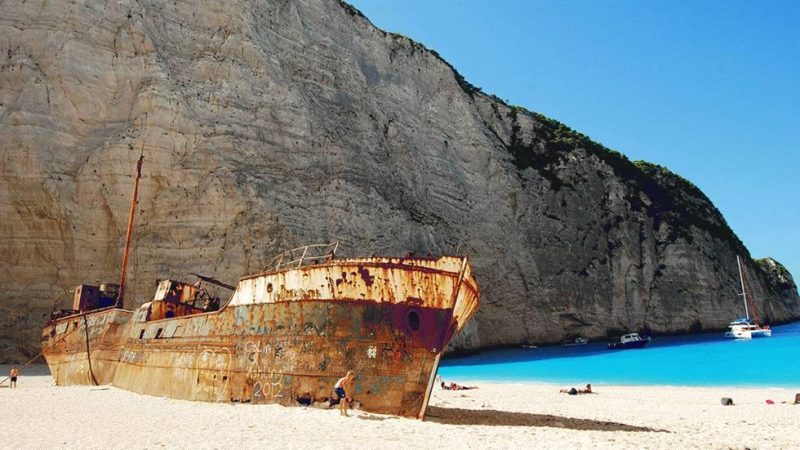 The MV Panagiotis is seen on Navagio beach in Zakynthos, Greece. (Flickr monica.renata)

This particular shipwreck presents some controversy revolving around whether it was actually wrecked or put there by the locals to bring in tourists. The wreckage lies on the coast of Zakynthos in the Ionaian Islands.

One of the more popular theories about the wreckage is that it was a smuggler ship that wrecked in 1980. However, the locals in the area believe that it was put there by the Greek Ministry of Tourism. Either way, the wreckage brings thousands of visitors each year.

Panoramic photo of the SS Sapona shipwreck off the coast of Bimini, The Bahamas. Taken Aug 19, 2009.

If a person is an avid horror film viewer, they will recognize this wreckage. It was shown in Ken Weider’s 1977 movie called Shock Waves. The ship was built during World War I but was stranded near Bimini during a hurricane in 1926.

The ship today bears some graffiti but is still visited by many tourists. It has also gained fame as a popular diving and snorkeling spot.

Gayundah beached off Woody Point, as seen in 2006

This particular ship was in the hands of many different captains for a number of projects. The first job it had was when it was operated by the Royal Australian Navy from the years of 1884 to 1921. It was then sold to Brisbane Gravel Pty Ltd and used as a gravel barge.

On June 2, 1958, the ship was finally put to. It was beached on the Redcliffe Peninsula just north of Brisbane so it could serve as a breakwater structure in defense of weather. It was put there to protect the shore against longshore drift. 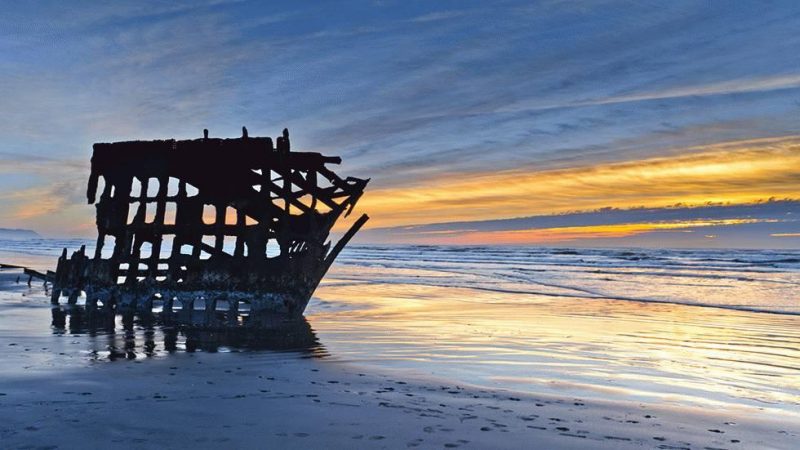 In 1906 this ship held a crew of about 27 people and was making its voyage from Salina Cruz, Mexico to Portland, Oregon. The ship ran into some trouble when the high seas and winds caused it to run aground just off of the Oregon coast. According to historical documents, there were no casualties. The bow of the ship still remains in the sand. 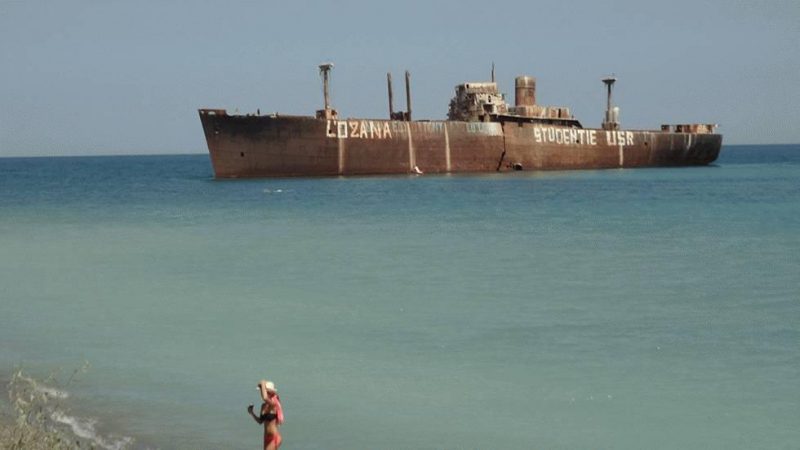 The Evangelia shipwreck in the Black Sea near the shores of Costinesti, Romania. (Flickr brianj.lowe)

This wreckage has been beached since the late 1960s. It was a business ship that had been constructed by the same shipyard that made the Titanic. (Harland Wolff in Belfast, Ireland)

The ship was stranded by its crew in the Black Sea in October 1968, having gotten too close to the coast and stuck in the rocks. Again, the site is a very popular spot for tourists.

« Phanagoria was the largest ancient Greek city, now about a third of the city is underwater
Stunning color photos of Norway in 1948 by Fredrik Daniel Bruno! »