This is the oldest footage of London ever. Includes amazing old footage, plus modern shots of the same location today.

The video was elaborated by Yestervid also features maps carefully researched to show where the camera was. 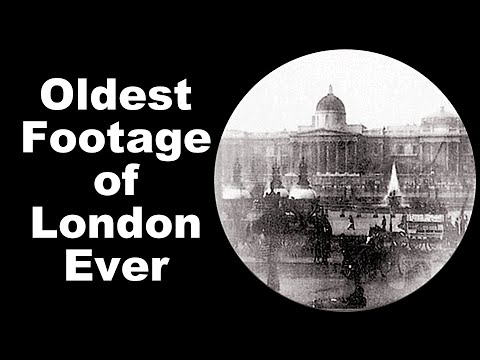 London (the capital city of England and the United Kingdom) has a history dating back over 2,000 years. During this time, it has grown to become one of the most significant financial and cultural capitals of the world. It has experienced plague, devastating fire, civil war, aerial bombardment, terrorist attacks, and widespread rioting. The City of London is its historic core and today is its primary financial district, though it now represents a tiny part of the wider metropolis of Greater London.

As the capital of a massive empire, London became a magnet for immigrants from the colonies and poorer parts of Europe. A large Irish population settled in the city during the Victorian period, with many of the newcomers refugees from the Great Famine (1845–1849). At one point, Catholic Irish made up about 20% of London’s population; they typically lived in overcrowded slums.London also became home to a sizable Jewish community, which was notable for its entrepreneurship in the clothing trade and merchandising.[26]

In 1888, the new County of London was established, administered by the London County Council. This was the first elected London-wide administrative body, replacing the earlier Metropolitan Board of Works, which had been made up of appointees. The County of London covered broadly what was then the full extent of the London conurbation, although the conurbation later outgrew the boundaries of the county. In 1900, the county was sub-divided into 28 metropolitan boroughs, which formed a more local tier of administration than the county council.

London entered the 20th century at the height of its influence as the capital of one of the largest empires in history, but the new century was to bring many challenges.

London’s population continued to grow rapidly in the early decades of the century, and public transport was greatly expanded. A large tram network was constructed by the London County Council, through the LCC Tramways; the first motorbus service began in the 1900s. Improvements to London’s overground and underground rail network, including large scale electrification were progressively carried out.

During World War I, London experienced its first bombing raids carried out by German zeppelin airships; these killed around 700 people and caused great terror, but were merely a foretaste of what was to come. The city of London would experience many more terrors as a result of both World Wars. The largest explosion in London occurred during World War I: the Silvertown explosion, when a munitions factory containing 50 tons of TNT exploded, killing 73 and injuring 400.

The period between the two World Wars saw London’s geographical extent growing more quickly than ever before or since. A preference for lower density suburban housing, typically semi-detached, by Londoners seeking a more “rural” lifestyle, superseded Londoners’ old predilection for terraced houses. This was facilitated not only by a continuing expansion of the rail network, including trams and the Underground, but also by slowly widening car ownership. London’s suburbs expanded outside the boundaries of the County of London, into the neighbouring counties of Essex, Hertfordshire,Kent, Middlesex and Surrey.

Like the rest of the country, London suffered severe unemployment during the Great Depression of the 1930s. In the East End during the 1930s, politically extreme parties of both right and left flourished. The Communist Party of Great Britain and the British Union of Fascists both gained serious support. Clashes between right and left culminated in the Battle of Cable Street in 1936. The population of London reached an all-time peak of 8.6 million in 1939.

Large numbers of Jewish immigrants fleeing from Nazi Germany, settled in London during the 1930s, mostly in the East End.