Theoretically, SS Ayrfield is just one of the many decommissioned ships floating in the Homebush Bay, an Australian shipyard, where ships are sent to die. But, what makes SS Ayrfield to distinguish from other shipwrecks is the spectacular mini forest that adorns its decayed hull.  The beautiful foliage amidst  the rotting vessel is a favorite attraction among urban explorer and among everyone which hearts beat faster when they see an elegant decay as this one.  It’s deemed to be one of the most beautiful abandoned ships and because of its lush surroundings got its name ” The Floating Forest” 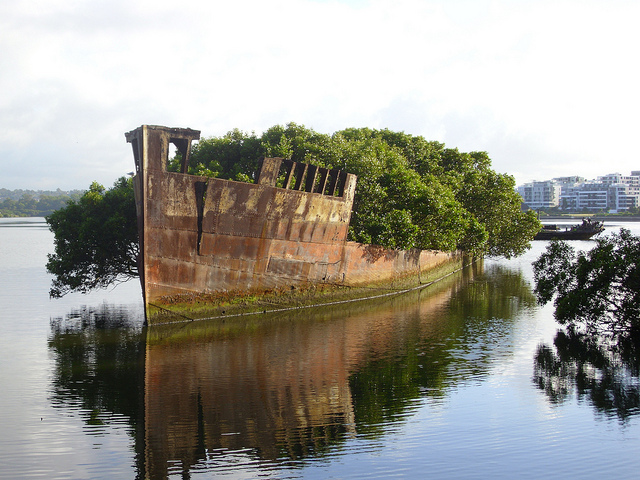 SS Ayrfield was originally launched as The SS Corriman, a colossal 1, 140-tone steel monster built in the UK back in 1911, and later in 1912 was registered in Sydney as a steam collier. During the Second World War,  SS Ayrfield was used to transport supplies to the U.S troops stationed in the Pacific.The ship went on to serve as a collier between Newcastle and Miller’s terminal in Blackwattle Bay. 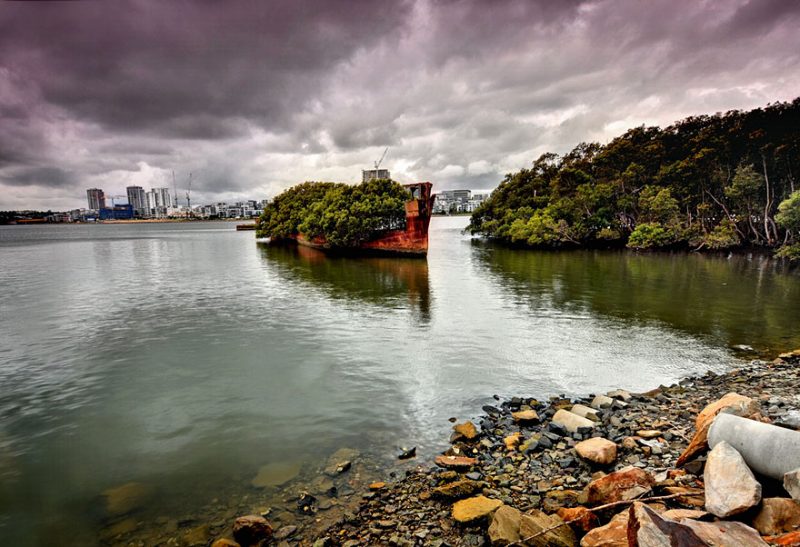 In 1972, it was time for  then 61-year-old  SS Ayrfield  to retire, so the ship was sent to Homebush Bay, the  ship-breaking yard, where many like SS Ayfield were left to decay. But unlike its ship mates, SS Ayrfield did not just abide corrosion and decomposing, but it got successfully enveloped by nature and now is a floating home of lush mangrove trees. 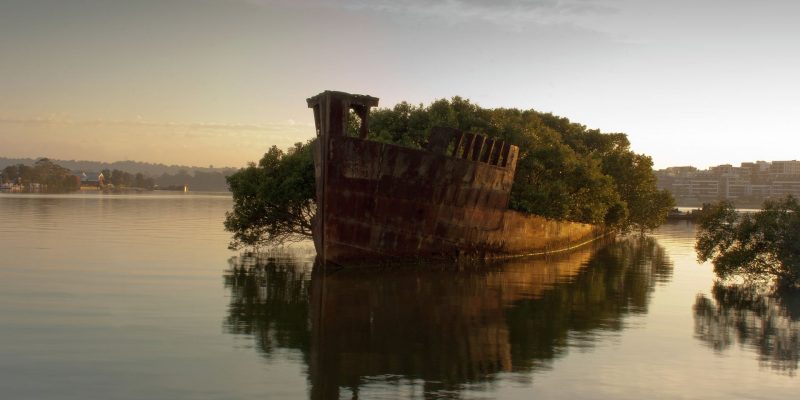 The remains of the SS Ayrfield in Homebush Bay, Sydney, Australia

Beside the spectacularly beautiful SS Ayrfield, number of ships’ hulls are visible in Homebush Bay, remains of the ship-breaking operations in the bay during the mid-20th century. These are the steam colliers  SS Mortlake Bank, steam tugboat SS Heroic, and boom defense vessel HMAS Karangi, all broken up in the early 1970s and now lying near the south-western shore of the bay. Remains of a number of smaller abandoned or broken up vessels lie nearby. 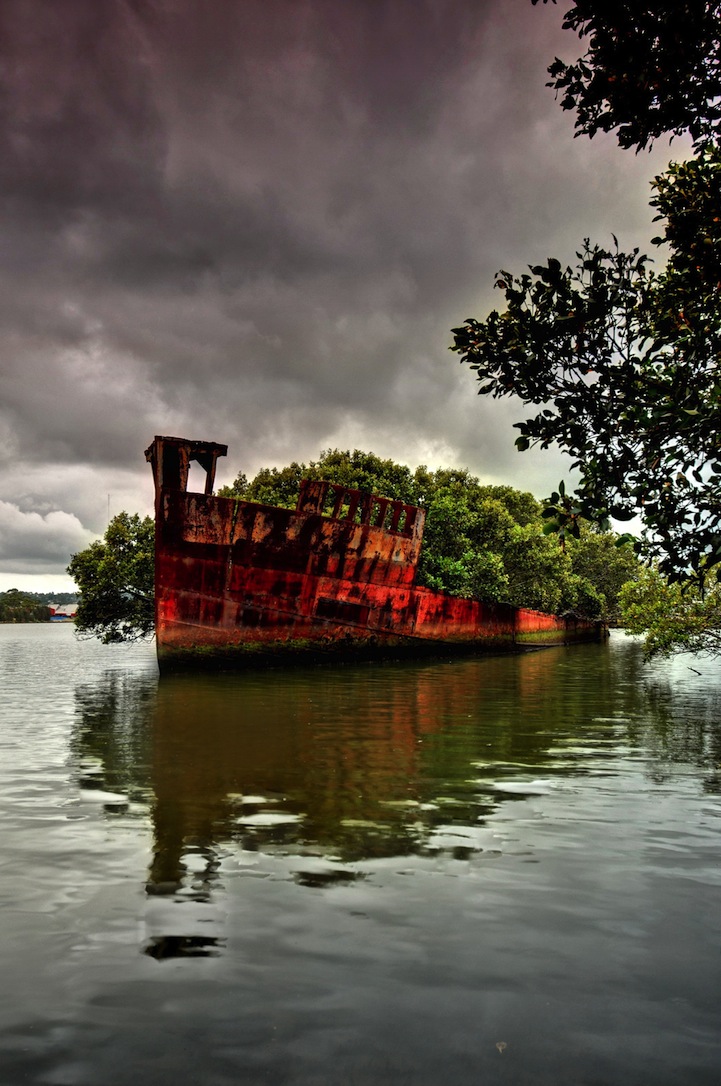 Homebush Bay is located on the southern shore of Parramatta River. In the 20th century, Homebush Bay became a center of heavy industry, with large scale land reclamation to accommodate industrial facilities. When industrial operations scaled down, the bay became a dumping ground for a large range of unwanted material – from waste to broken up ships, even toxic industrial waste. Union Carbide had manufactured chemicals, including Agent Orange, on the site and dioxins produced as a by product were buried in landfill or left in drums. 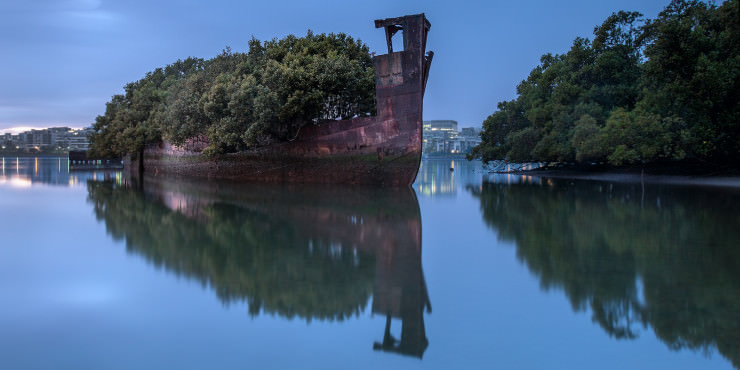 A drive to regenerate and rehabilitate the bay began in the 1980s. This led to the construction of Bicentennial Park, including a program to regenerate some of the mangrove wetlands and salt marshes which existed around the bay pre-development. In preparation for the 2000 Sydney Olympics, it was decided to site Sydney Olympic Park at Homebush Bay, which spurred the further regeneration and rehabilitation of the bay. 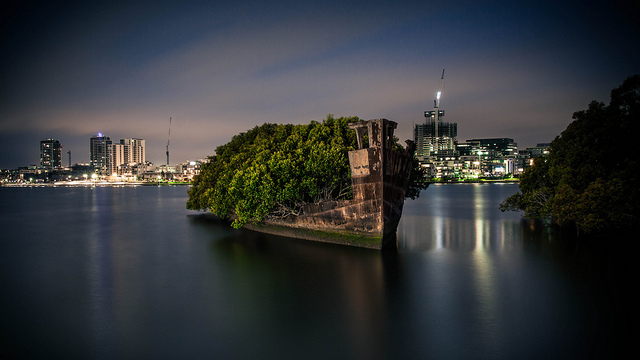