This genuinely old footage of Hawaii was taken by Thomas Edison for Robert Bonnine who was filming the documentary “Actuality”  in 1906. The possibly oldest surviving footage of Hawaii shows shots of Waikiki Beach Honolulu, surf riders and a native Hawaiians throwing net in malos. 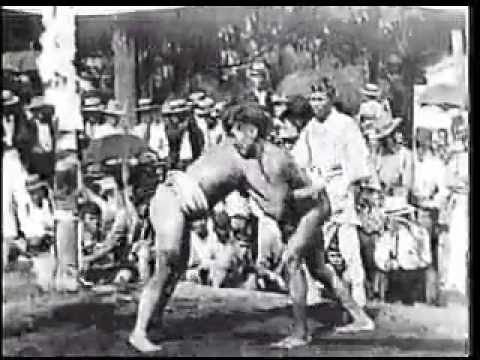 The history of Hawaii begins sometime around 1 CE, the earliest Polynesian settlers began to populate the islands. Around 1200 CE Tahitian explorers found and began settling the area as well. This became the rise of the Hawaiian civilization and would be separated from the rest of the world for another 500 years until the arrival of the British. Within five years of contact a local king used European military technology to conquer all the tribes and unify the islands for the first time. The Kingdom of Hawaii was prosperous and important for its agriculture and strategic location in the Pacific. American immigration began almost immediately after contact, led by Protestant missionaries. American style, plantation farming for sugar required extensive labor, which the natives did not want to do. Several waves of permanent immigrants came from Japan, as well as China and the Philippines. Meanwhile the native population declined and by 1900 it was a minority element. In the 1880s the Hawaiian monarchy was forced to accept a constitution replacing royal absolutism with a constitutional monarchy. The new Queen attempted to regain absolute power in 1893 and was overthrown by the business community. They established theRepublic of Hawaii, but were at risk from the threat of the Japanese fleet. The Republic sought union with the U.S. and the U.S. Congress obliged in 1898. It became Hawaii Territory and in 1959 the state of Hawaii in terms of equality with the other 49 states of the United States. The farming has mostly ended, and the economy is now based on tourism and military bases.

The state encompasses nearly the entire volcanic Hawaiian archipelago, which comprises hundreds of islands spread over 1,500 miles (2,400 km). At the southeastern end of the archipelago, the eight main islands are—in order from northwest to southeast: Niʻihau, Kauaʻi, Oʻahu, Molokaʻi, Lānaʻi, Kahoʻolawe, Maui and the Island of Hawaiʻi. The last is the largest island in the group; it is often called the “Big Island” or “Hawaiʻi Island” to avoid confusion with the state or archipelago. The archipelago is physiographically and ethnologically part of the Polynesian subregion of Oceania.

Hawaii’s diverse natural scenery, warm tropical climate, abundance of public beaches, oceanic surroundings, and active volcanoes make it a popular destination for tourists, surfers, biologists, and volcanologists. Because of its central location in the Pacific and 19th-century labor migration, Hawaii’s culture is strongly influenced by North American and Asian cultures, in addition to itsindigenous Hawaiian culture. Hawaii has over a million permanent residents, along with many visitors and U.S. military personnel. Its capital is Honolulu on the island of Oʻahu.

Hawaii is the 8th-smallest and the 11th-least populous, but the 13th-most densely populated of the fifty U.S. states. It is the only state with an Asian plurality. The state’s coastline is about 750 miles (1,210 km) long, the fourth longest in the U.S. after the coastlines of Alaska, Florida and California.