Alfred Stieglitz  was an American photographer and modern art promoter who was instrumental over his fifty-year career in making photography an accepted art form. In addition to his photography, Stieglitz is known for the New York art galleries that he ran in the early part of the 20th century, where he introduced many avant-garde European artists to the U.S. He was married to painter Georgia O’Keeffe.

Here are some rare portraits in color that reflect his sharp sense for composition. 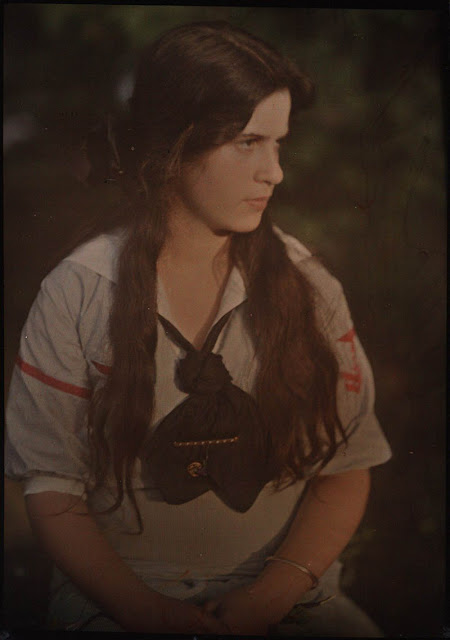 Sometime in late 1892 Stieglitz bought his first hand-held camera, a Folmer and Schwing 4×5 plate film camera. Prior to this he had been using an 8×10 plate film camera that always required a tripod and was difficult to carry around. He was invigorated by the freedom of the new camera, and later that winter he used the new camera to make two of his best known images, Winter, Fifth Avenue and The Terminal.

Stieglitz soon gained a fame for both his photography and his writing about photography’s place in relation to painting and other art. In the spring of 1893 he was offered the job of co-editor of The American Amateur Photographer, which he quickly accepted. In order to avoid the appearance of bias in his opinions and because Photochrome was now printing the photogravures for the magazine, Stieglitz refused to draw a salary. From then on he wrote most of the articles and reviews in the magazine, and he quickly gained an enthusiastic audience for both his technical and his critical writings.

During the course of his long career, Stieglitz produced more than 2,500 mounted photographs. After his death O’Keeffe committed to assembling the best and most complete set of his photographs, selecting in most cases what she considered to be only the finest print of each image he made. In some cases she included slightly different versions of the same image, and these series are invaluable for their insights about Stieglitz’s aesthetic composition. She chose only those prints that Stieglitz had personally mounted, since he did not consider a work to be finished until he completed this step. In 1949 she donated the first part of what she called the “key set” of 1,317 Stieglitz photographs to the National Gallery of Art in Washington, DC. In 1980 she added to the set another 325 photographs taken by Stieglitz of her, including many nudes. Now numbering 1,642 photographs, it is the largest, most complete collection of Stieglitz’s work anywhere in the world. In 2002 the National Gallery published a two-volume, 1,012-page catalog that reproduced the complete key set along with detailed annotations about each photograph. In early 1938, Stieglitz suffered a serious heart attack, one of six coronary or angina attacks that would strike him over the next eight years. Each would leave him increasingly weakened, and his recovery times would lengthen after each one. Still, as soon as he was strong enough he would return to The Place and pick up where he left off. In his absence, Dorothy Norman managed the gallery. Stieglitz would often sleep on a small cot at the gallery, either too weak to leave or not wanting to return to his usually empty home. O’Keeffe remained in her Southwest home from spring to fall of this period. In the summer of 1946 Stieglitz suffered a fatal stroke. He remained in a coma long enough for O’Keeffe to finally return home. When she got to his hospital room Dorothy Norman was there with him. She left immediately, and O’Keeffe was with him when he died. According to his wishes, a simple funeral was held with only twenty of his closest friends and family in attendance. Stieglitz was cremated, and O’Keeffe and his niece Elizabeth Davidson took his ashes to Lake George. O’Keeffe never revealed exactly where she distributed them, saying only “I put him where he could hear the water.”