Mini Rock Stars-photos of iconic musicians when they were children

We were all babies, but some babies grew up to be kick-ass rock stars and some don’t.

Sure it’s  fun to see your favorite bad-ass rock star as a cute baby!

Take a look at the bellow photo collection of iconic Rock Stars as children: 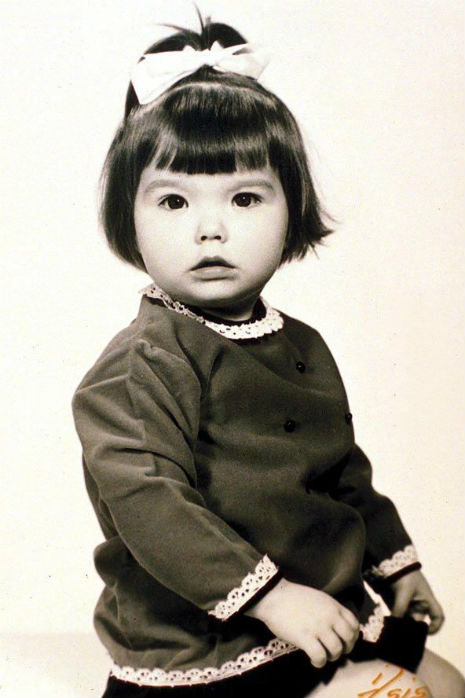 Björk was born on 21 November 1965, in Reykjavík, where she grew up. Björk’s mother is activist Hildur Rúna Hauksdóttir, who protested against the development of Iceland’s Kárahnjúkar Hydropower Plant;Hildur has distant Irish ancestry.[Björk’s father is Guðmundur Gunnarsson, a union leader and electrician. They divorced when Björk was born and she moved with her mother to a commune. Her stepfather is Sævar Árnason, a former guitarist in a band called Pops.At six, Björk enrolled at Reykjavík school Barnamúsíkskóli, where she studied classical piano and flute.After a school recital in which Björk sang Tina Charles’ 1976 hit “I Love to Love”, her teachers sent a recording of her singing the song to the RÚV radio station – then, Iceland’s only radio station. The recording was nationally broadcast and, after hearing it, a representative of the Fálkinn record label offered Björk a recording contract. Her self-titled début, Björk, was recorded and released in Iceland in December 1977. Boy George was born George Alan O’Dowd in Eltham, London, UK, on 14 June 1961, to Jeremiah and Dinah O’Dowd, and had four brothers and one sister. Brian Eno was born in 1948 at Phyllis Memorial Hospital, Woodbridge, Suffolk, the son of Catholic parents William Eno, who had followed his father and grandfather into the postal service, and Maria Eno (née Buslot), a Belgian-born woman whom William had met during his World War II service. The unusual surname Eno, long established in Suffolk, derives from the French Huguenot surname Hennot.Maria had already had a daughter (Brian’s half-sister Rita), and together William and Maria would have two further children, Arlette and Roger. Bowie was born in Brixton, south London. His mother, Margaret Mary “Peggy” (née Burns), who although born in Kent was of Irish descent, worked as a waitress, while his father, Haywood Stenton “John” Jones, from Yorkshire, was a promotions officer for the children’s charity Barnardo’s. The family lived at 40 Stansfield Road, near the border of the south London areas of Brixton and Stockwell. Bowie attended Stockwell Infants School until he was six years old, acquiring a reputation as a gifted and single-minded child—and a defiant brawler Harry was born in Miami, Florida, and adopted at three months by Catherine (Peters) and Richard Smith Harry, gift shop proprietors in Hawthorne, New Jersey.She attended Hawthorne High School, where she graduated in 1963

Diana Ross was born at Hutzel Women’s Hospital in Detroit on March 26, 1944. She was the second eldest child of Ernestine (née Moten; January 27, 1916 – October 9, 1984), a schoolteacher, and Fred Ross, Sr. (July 4, 1920 – November 21, 2007), a former Army soldier. Much has been made of whether her first name ends in an “a” or an “e”. According to Ross, her mother actually named her “Diane” but a clerical error resulted in her name being recorded as “Diana” on her birth certificate. Although she was sometimes listed as “Diana” during the first Supremes records, she introduced herself as “Diane” until early in the group’s heyday. Her friends still call her “Diane”.Ross’s grandfather John E. Ross, a native of Gloucester County, Virginia, was born to Washington Ross and Virginia Baytop. Virginia Baytop’s mother Francis “Frankey” Baytop was a former slave who had become a midwife after the Civil War. Parton was born in Sevier County, Tennessee, the fourth of twelve children of Robert Lee Parton (1921–2000), a farmer and construction worker, and his wife Avie Lee (née Owens) (1923–2003). Parton’s middle name comes from her maternal great-great grandmother, Rebecca (Dunn) Whitted (1861–1930)She has described her family as being “dirt poor”. Parton’s father paid with a bag of oatmeal the doctor who helped deliver her. She outlined her family’s poverty in her early songs: “Coat of Many Colors” and “In the Good Old Days (When Times Were Bad)”. They lived in a rustic, one-room cabin in Locust Ridge,just north of the Greenbrier Valley of the Great Smoky Mountains, a predominantly Pentecostal area. Mercury (born Farrokh Bulsara) was born in the British protectorate of Sultanate of Zanzibar, East Africa (now part of Tanzania).His parents, Bomi (1908–2003) and Jer Bulsara (1922–),were Parsis from the Gujarat region of the then province of Bombay Presidency in British India.[The family surname is derived from the town of Bulsar (now known as Valsad) in southern Gujarat. As Parsis, Mercury and his family practised the Zoroastrian religion.The Bulsara family had moved to Zanzibar so that his father could continue his job as a cashier at the British Colonial Office. He had a younger sister, Kashmira. Curtis was born at the Memorial Hospital in Stretford, Lancashire. He grew up in Macclesfield in Cheshire, and from an early age he exhibited talent as a poet. Jimi Hendrix was primarily of African-American descent. His paternal grandmother, Zenora “Nora” Rose Moore, was one-quarter Cherokee. Hendrix’s paternal grandfather, Bertran Philander Ross Hendrix (born 1866), was the result of an extramarital affair between a black woman named Fanny, and a grain merchant from Urbana, Ohio or Illinois, one of the wealthiest white men in the area at that time. On June 10, 1919, Hendrix and Moore had a son they named James Allen Ross Hendrix; people called him Al.

Joey Ramone with his father. Joey Ramone was born Jeffrey Ross Hyman to Noel Hyman and his wife Charlotte (née Mandell). The family lived in Forest Hills, Queens New Yorkwhere Hyman and his future Ramones bandmates attended Forest Hills High School. Though happy, Hyman was something of an outcast, diagnosed at 18 with obsessive–compulsive disorder. Cave was born on 22 September 1957 in Warracknabeal, a small country town in the state of Victoria, Australia, to Dawn Cave (née Treadwell) and Colin Frank Cave. As a child, he lived in Warracknabeal and then Wangaratta in rural Victoria. His father taught English and mathematics at the local school; his mother was its librarian.Cave’s father introduced him to literary classics from an early age, such as Crime and Punishment and Lolita,and also organised the first symposium on the Australian bushranger and outlaw Ned Kelly, of whom Nick was enamoured as a child. Simone was born Eunice Kathleen Waymon in Tryon, North Carolina. The sixth of eight children in a poor family, she began playing piano at age three; the first song she learned was “God Be With You, Till We Meet Again”. Demonstrating a talent with the instrument, she performed at her local church. Patricia Lee Smith was born in Chicago.Her mother, Beverly, was a waitress, and her father, Grant, worked at the Honeywell plant. The family was of Irish ancestry.She spent her early childhood in the Germantown neighborhood of Philadelphia, before her family moved to Woodbury, New Jersey.Her mother was a Jehovah’s Witness. Patti had a strong religious upbringing and a Bible education, but left organized religion as a teenager because she felt it was too confining; much later, she wrote the line “Jesus died for somebody’s sins, but not mine” in her cover version of Them’s “Gloria” in response to this experience. Vicious was born John Simon Ritchie on 10 May 1957 in Lewisham, to John and Anne Ritchie (née McDonald). His mother dropped out of school early due to a lack of academic success and went on to join the RAF, where she met her husband-to-be, Ritchie’s father, a guardsman at Buckingham Palace and a semi-professional trombone player on the London Jazz scene.Shortly after Ritchie’s birth, he and his mother moved to Ibiza, where they expected to be joined by his father who, it was planned, would support them financially in the meantime. However, after the first few cheques failed to arrive, Anne realized he would not be coming. Anne later married Christopher Beverley in 1965, before setting up a family home back in Kent. Ritchie took his stepfather’s surname and was known as John Beverley. Syd Barrett was born as Roger Keith Barrett in the English city of Cambridge to a middle-class family living at 60 Glisson Road.Barrett was the third of five children.His father, Arthur Max Barrett, was a prominent pathologist and he was related to Elizabeth Garrett Anderson, through Max’s maternal grandmother Ellen Garrett, who was Elizabeth’s cousin.n 1951 his family moved to 183 Hills Road.

« 1910 in Color- Astonishing autochrome portraits taken By Alfred Stieglitz
That time Cleveland released 1.5 Million balloons into the air at once and it was a debacle »