A medieval ship that sunk nearly 600 years ago is currently in the process of being hauled out of a Dutch river. It is believed that the ship was deliberately sunk by maritime engineers in an effort to alter the flow of the Ijssel River. The river is an offshoot of the Rhine River that flows through six European countries. It is also believed that the ship had sailed during the time when the Hanseatic League dominated the sea. The League was made up of a group of guilds that traded across Europe.

The lead marine archaeologist on the excavation, Wouter Waldus, mentioned that this is one of the biggest achievements for the entire excavation team. It is quite rare for an entire Ijssel cog to be found, let alone completely intact. He added that as soon as the ship is cleared off, it will become a significant symbol of their maritime history.

The ship was actually found in 2012 when there were efforts being made to widen the flow of the Ijssel River. The ship was lying perpendicular to the river flow, along with a medieval barge and a punt, which is a special ship designed for navigating river deltas.

In the course of three years, maritime archaeologists made the tough decision to recover the ancient vessel. Although it is an amazing discovery, the restoration and excavation processes are time-consuming. 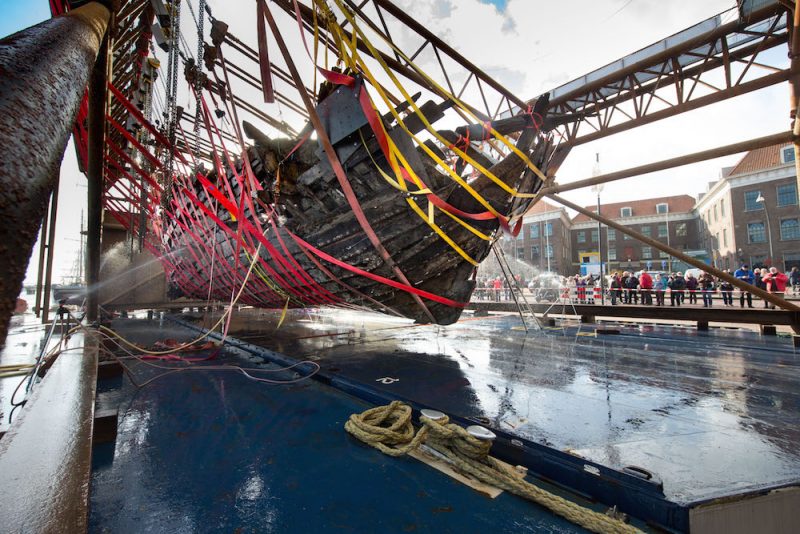 The wooden, flat-bottomed ship was first discovered in 2012 while a national organization was carrying out investigations to preserve water safety in the Dutch river.
Credit: Rijkswaterstaat, the Netherlands

The first thing the team had to do was build a platform and crane on the river. They then had to build a protective frame around the ship in order to lift it out of the water. After the frame was up, they had to suction all of the debris and junk that was in between the frame and ship. The team was then ready to lift the boat carefully out of the water. They used a basket-like structure made of straps, crossbeams, and jacks. Each strap had its own motorized control in order to allow precise maneuvering during the force of the lifting.

Ben Broens, an official with the Rijkwaterstaat, said that everyone had to be involved in the lifting process. He described it as almost as impressive as the vessel itself. The ship was measured and was recorded as being 65 feet long. However, removing the ship was more complex than the team of archaeologists thought it would be. Broens added that it was especially complex due to the fact the ship was in the middle of the river and right near the navigation channel. To add to the complexity, there had to be three groups of specialists on site, including an archaeological research team, divers, and storage specialists.

On getting the wreck out of the water, the archaeologists had their first good look at it. The vessel weighs 55 tons and is, in fact, a medieval cog. It has a straight ship prow and deck beams that stick out of the boat. Cogs were generally used in the late medieval period on international trading voyages. The structural support elements like nails were made of metal, which means it was sturdier during its use. Because of these sturdy elements, it made the excavation process a little easier.

Adding to the teams’ speculation, it does appear that the ship was deliberately sunk. The teams looked at medieval maps and historical documents and recreated the historical path of the river. They managed to figure out that the ship was sunk because the silt was building up on the riverbed, which would have been causing large sandbanks along the river. The sandbanks would have prevented the ships from docking properly, so that is why the ship, punt, and the barge were all sunk. These would have narrowed the river flow or diverted it in a way that would have improved navigation on the  river.

On investigation, the teams found that the ship was stripped of its original finery, but they found an intact brick oven and beautiful glazed tiles in the galley of the ship.

Now that the ship is safely out of the water, the teams will transport it in its custom-made frame to the reservation facility in Leylstad, Netherlands. It will go through the tedious process of drying out, which could take up to three years. If everything goes well, the cog will eventually be put on display in a museum, but if it won’t dry out safely it will be studied and eventually destroyed by specialists.