They are dubbed “Stairway to Heaven,” not because the one who constructed them was a Led Zeppelin fan, but because of the whopping 3,922 steps that span along Oahu’s Ko’olau mountain range.

The Haʻikū Stairs, also known as  Haʻikū Ladder, was an illegal steep hiking trail on the island of Oʻahu, Hawaii, now due to a storm that ruined the stairs in 2015, the favorite spot of every reckless adventurer is closed.

Beginning in 1942, contractors for the United States Navy began construction of the Haʻikū Radio Station, a top-secret facility that was to be used to transmit radio signals to the Navy ships that were then operating throughout the Pacific.

In order to obtain the necessary height for the antennae, the Navy stretched them across Haiku Valley, a natural amphitheater surrounded by high ridges. To accomplish this, they needed “easy” access to the top of the ridges, so they installed a wooden ladder up the mountain. The ladder was later replaced by a wooden staircase. (Those who had made the climb before the installation of the ladder referred to it as a “sissy climb.”) Once the cable car was in operation, most workers preferred to ride the car to the upper hoist house rather than enduring the tedious climb up the stairs. Some remaining parts of the wooden ladder may still be seen beside the metal steps.

The radio station was commissioned in 1943. To transmit such a powerful signal, the Navy needed a transmitter of greater capability than was then possible with vacuum tube technology. They therefore decided upon an Alexanderson alternator, a huge device capable of generating powerful radio-frequency signals, and requiring an antenna of heroic proportions. 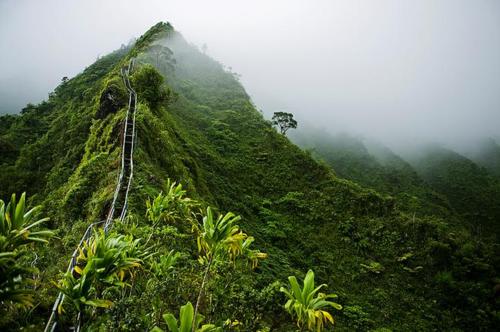 When the Naval base was decommissioned in the 1950s, the United States Coast Guard used the site for an Omega Navigation System station. In the mid-1950s, the wooden stairs were replaced by sections of metal steps and ramps — by one count, 3,922 steps.

The station and trail were closed to the public in 1987. Some hikers ignore the ‘No Trespassing’ signs and continue to climb, contributing to the local community’s misgivings about reopening the structure. 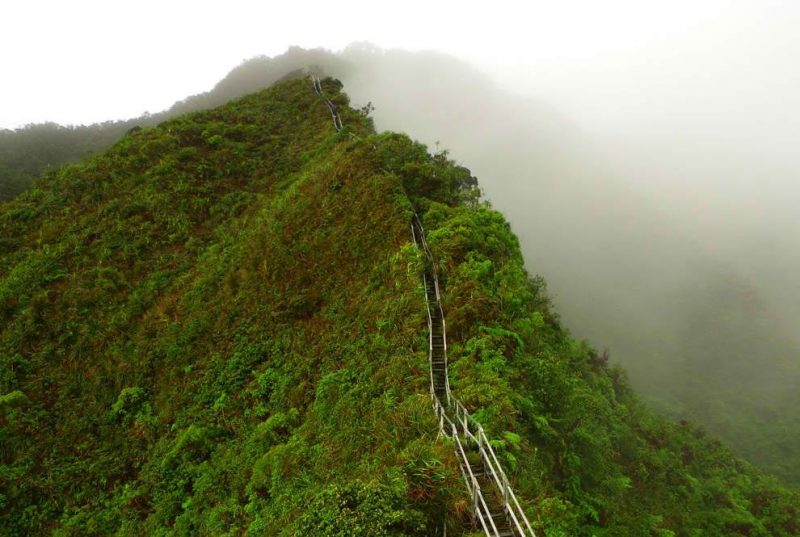 In 2003, the stairs were repaired, costing the city $875,000. As of early 2012, land access rights issues have not been resolved. The City and County of Honolulu has stated that there is currently no plan to open the stairs for public use, citing liability concerns, although it has been noted that the mayor is publically open to reopening the stairs under certain circumstances. Dozens of people, however, routinely hike up the stairs every day; there’s at least one video of such hikes posted online.In August 2012, Don Tiki show singer and comedian, Fritz Hasenpusch died of a heart attack during his Haiku Stair climb. 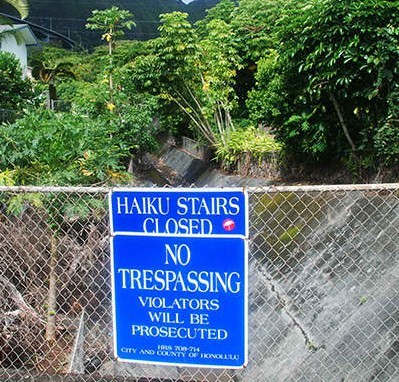 Over Valentine’s Day weekend 2015, a powerful storm passed over the island of Oahu which caused significant damage to the stairway, reportedly rendering them unusable. As of January 2016, a guard is still posted at the base of the stairs.