Smith & Wesson’s ‘Hush Puppy’ used by the US Navy SEALs during the Vietnam War.

Smith & Wesson’s Model 39 was developed in the early 1950s in response to proposals from the US Army for a new, lighter service pistol chambered in 9x19mm. While the initial interest from the Army evaporatedSmith & Wesson were left with a modern semi-automatic handgun; their first modern automatic pistol since the Model 32 launched in 1924.

The Model 39 was introduced for commercial sale in 1955 and was the first American designed double action semi-automatic pistol to be marketed in the US. Developed by Smith & Wesson engineer Joseph Norman, the Model 39 had an aluminium alloy frame with a carbon steel slide. It had a relatively short 4 inch barrel, fed from an 8-round single stack magazine and had a slide mounted safety – which like theWalther P38, that inspired the design decocked the weapon. Despite its advanced features and light weight (28 ounces) the pistol was not adopted by the US military although it was adopted by Illinois’ state police in 1967.

Over a decade after its launch the Model 39 found a niche during the Vietnam War. In 1966, the Naval Ordnance Laboratory developed a specially modified version of the Model 39 at the request of Navy SEAL teams deployed in Vietnam. The SEALs had requested a weapon they could silence enemy guard dogs (and more importantly personnel) with; this led to suppressed pistols ubiquitously being nicknamed ‘Hush Puppies’.

The Model 39’s barrel was extended by an inch and threaded at the muzzle to accept a suppressor. A simple slide lock was also added to allow the pistol to be fired in a single shot mode to minimise action noise. The magazine and magazine housing were adapted to use a 13-round double stack magazine. The large diameter of the suppressor housing also required that the Model 39’s sights be raised so the pistol could be effectively sighted. The pistol’s backstrap was also dovetailed for a wire stock which could be fitted to improve accuracy. The resulting weapon was designated the ‘9mm Pistol Mark 22 Mod 0’.

The pistol was paired with the Mark 3 suppressor which was 5 inches long and weighed an additional 8 ounces. The Mark 3 was made up of a suppressor insert held in place by a spring retainer. The insert was made of an aluminium capsule filled with four ¼ inch thick soft plastic disks or wipes. The disks were whole until the first round passed through them making a channel. The capsule could be easily replaced once used; it had an expected life span of approximately 24 rounds. 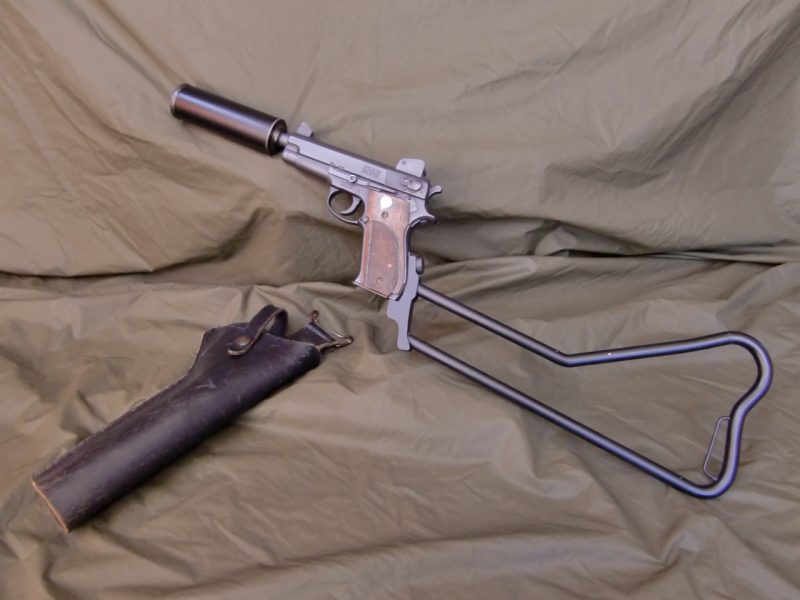 In addition to the suppressor; specially developed ammunition was also used. Designated the Mark 144 round, it had a heavy 158 grain fully jacketed projectile and had a muzzle velocity of 950 feet per second. With its suppressor fitted, slide locked and Mark 144 ammunition used the pistol’s report was reduced to approximately 129 decibels.

Smith & Wesson produced the pistols modified to the US Navy’s specifications with between 110 and 120 pistols made. They were operationally deployed from 1967 onwards and each SEAL platoon was issued with a minimum of one Mark 22 ‘Hush Puppy’. They were used by SEAL teams who penetrated into North Vietnamese waters and targeted both North Vietnamese and allegedly Chinese targets. The Mark 22 Mod 0remained in service with the SEALs into the 1990s when they were replaced by the Mark 23 Mod 0 made by H&K.

He also runs historicalfirearms.info, a site that looks at the history, development and use of firearms as well as wider military history.Follow him on twitter.