Bertrand Chiado Has Seen It All! One of the oldest bookstores in the world!

They say the older the wine is the better the taste is. That is exactly how we feel about old books, libraries, and bookstores. There is something about old books that is fascinating, the crumbled pages, “the old book smell,”  the idea that it has been around for centuries, is just awe inspiring. (ok, you get it, we love old books).

We don’t know why we expected the oldest bookstore to be somewhere in Britain, we guess because of Shakespeare or something like that, but we couldn’t be more wrong.  The oldest bookstore,  dating to 1732 is located at the typical Portugal-street Rua Garrett in Chiado, Lisbon.

Bertrand Chiado is officially the oldest bookshop in the world that is still working, and this title was officialized by Guinness Book of Records in 2011.

However, according to Wikipedia, the oldest bookshop is the Moravian Book Store in Bethlehem, Pennsylvania, founded in 1745. Nevertheless, we decided to stick with Bertrand Chiado. When Pedro Faure had opened the doors of his little bookstore at Rua Diereito do Loreto, he was hoping that it will become the center of intellectual and artistic events, but we bet he would have never imagined that it would last more than two centuries.

The business was going well and Faure was achieving his goal to create a spot where intellectuals will gather since eminent Portuguese writers were frequent guests at his store. 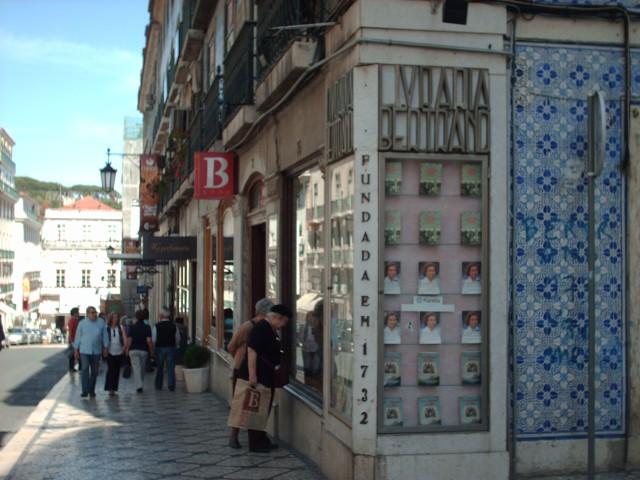 Unfortunately, in 1775 the earth shook strongly in Portugal as The Great Lisbon Earthquake .occurred, and  had nearly destroyed the city. Faure sold his bookstore to the Bertrand Brothers and  they relocated the shop near the Nossa Senhora das Necessidades Chapel, returning to the “Baixa de Lisboa” 18 years later when it was rebuilt.

Over the years, The Bertrand has been expanding and is now the largest bookstore chain in Portugal with more than 50 shops. The Bertrand Bookstore is not only the oldest bookstore in the world but in 2013 was elected as the favorite bookshop according to an online survey conducted by the Associação de Editores e Livreiros (APEL). During all these years, The Bertrand hosted important political and intellectual discussions. The bookstore was a favorite place to many important writers and thinkers, who attended Bertrand not only to read  but also to be part of intellectual gatherings and to socialize.

Eça de Queirós, Antero de Quental and Alexandre Herculano are some of the names who have frequently visited the bookstore. Herculano, in fact, was a resident in the bookshop and has launched many of his books here.  Another frequent visitor was Aquilino Ribeiro, and now  at the first room on the right side you can see the “Corner of Aquilino”.

The Bertrand bookstore has several rooms and a few spots so the visitors can sit and read. If you are a bookworm and on your way to Portugal, you have to add this place to your visit guide.

Here is some more info