Wrestling as a modern sport developed in the 19th century out of traditions of folk wrestling, emerging in the form of two styles of regulated competitive sport, “freestyle” and “Greco-Roman” wrestling (based on British and continental tradition, respectively), summarized under the term “amateur wrestling”, by the beginning of the modern Olympics in 1896. The separation of “worked”, i.e. purely performative, choreographed wrestling (admitted fakery or “kayfabe”) from competitive sport begins in the 1920’s.

This video below documents the match between Gustav Frištenský ( a Czech strongman and Greco-Roman wrestler) and  Josef Smejkal in  Prague, Czech Republic, 1913, and is considered to be the oldest footage of a professional wrestling match. 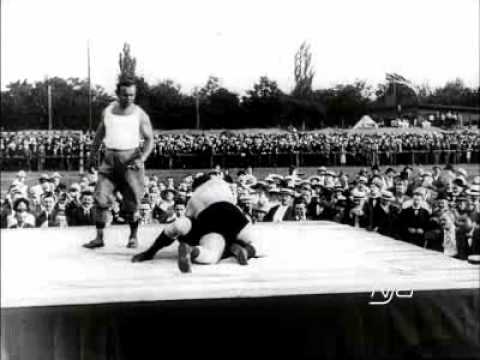 A tradition of combining wrestling and showmanship originates in 1830s France, when showmen presented wrestlers under names such as “Edward, the steel eater”, “Gustave d’Avignon, the bone wrecker”, or “Bonnet, the ox of the low Alps” and challenged members of the public to knock them down for 500 francs.

In 1848, French showman, Jean Exbroyat formed the first modern wrestlers’ circus troupe and established a rule not to execute holds below the waist — a style he named “flat hand wrestling”. This new style soon spread to the rest of Europe, the Austro-Hungarian Empire, Italy, Denmark and Russia under the names of Greco-Roman wrestling, Classic wrestling or French wrestling. By the end of the 19th century, this modern “Greco-Roman” wrestling style went on to become the most fashionable sport in Europe, and in 1898 the Frenchman Paul Pons, “the Colossus” became the first Professional World Champion.

Its popularity declined during World War II, but it was revived in the late 1940’s to 1950’s, the First Golden Age of professional wrestling in the United States, during which Gorgeous George gained mainstream popularity. In Mexico and Japan, the 1940’s-1950’s was also a Golden Age for professional wrestling, with Santo becoming a Mexican folk hero, and Rikidōzan achieving similar fame in Japan.

There was a marked decline in public interest in the 1970’s and early 1980’s, but with the advent of cable television in the mid 1980’s, there followed a Second Golden Age as the United States experienced a professional wrestling boom, with protagonists such as Andre the Giant, Macho Man Randy Savage and Ric Flair. The nature of professional wrestling was changed dramatically to better fit television, with interesting characters and storylines. Television has also helped many wrestlers break into the  mainstream media, becoming influential celebrities and icons of popular culture. Wrestling’s popularity boomed when independent enthusiasts unified and their media outlets grew in number, and became an international phenomenon in the 1980’s, with the expansion of the World Wrestling Federation. Throughout the 1990’s, professional wrestling achieved highs in both viewership and financial success during a time of fierce competition among competing promotions, such as World Wrestling Federation, World Championship Wrestling and Extreme Championship Wrestling.

« Island of Monte Cristo open for tours, you’ll just have to wait for three years before going
Egyptian artificial toes, discovered in the ancient city of Thebes, were the world’s earliest functional prosthetic body parts »