Underwater habitats are underwater structures in which people can live for extended periods and carry out most of the basic human functions of a 24-hour day, such as working, resting, eating, attending to personal hygiene, and sleeping. In this context ‘habitat’ is generally used in a narrow sense to mean the interior and immediate exterior of the structure and its fixtures, but not its surrounding marine environment.

The ideas of conquering the sea debts and building an underwater colony have been captivating humanity for a long time. We have all heard about the adventures of Captain Nemo and his amazing vessel Nautilus. The submarines have been a reality for quite some time, but a permanent underwater habitat is still something to be explored. The thought of living beneath the sea was quite popular during the 1960s and 1970s. For example, new technologies and materials inspired Dr. Bond (an American military physician) create a functional underwater dwelling. The US Navy wasn’t really fond of this idea and rejected the project as unfeasible. 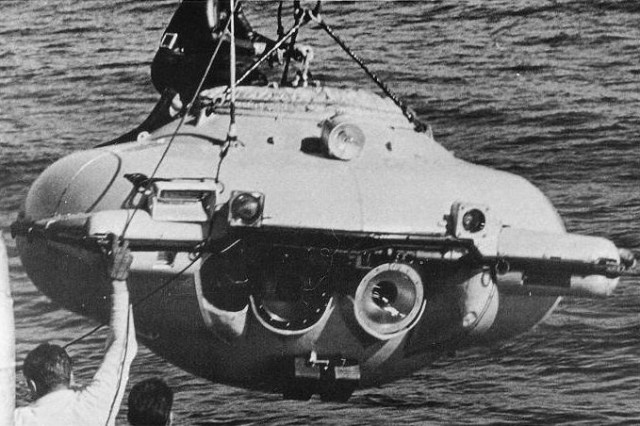 Cousteau’s SP-350 Denise, famous as the “Diving saucer”. A small submarine designed to hold two people, and is capable of exploring depths of up to 400 metres (1,300 ft)

Luckily, Bond connected with another man who was fascinated by the same adventurous idea. That man was Jacques Cousteau. This french filmmaker, innovator, scientist, photographer, author and researcher was probably one of the greatest researchers of the underwater world. He studied the sea and all forms of life in water. Cousteau and his ‘Calypso’ diving team accepted this challenge. Very soon, they made the first attempts for an underwater colony in human history.

The project’s name was “Conshelf.” Conshelf, short for Continental Shelf Station, was a series of undersea living and research stations undertaken by Jacques Cousteau’s team in the 1960s. The original design was for five of these stations to be submerged to a maximum depth of 300 metres (1,000 ft) over the decade; in reality, only three were completed with a maximum depth of 100 metres (330 ft). Much of the work was funded in part by the French Petrochemical industry, who, along with Cousteau, hoped that such manned colonies could serve as base stations for the future exploitation of the sea.

Such colonies did not find a productive future, however, as Cousteau later repudiated his support for such exploitation of the sea and put his efforts toward conservation. It was also found in later years that industrial tasks underwater could be more efficiently performed by undersea robot devices and men operating from the surface or from smaller lowered structures, made possible by a more advanced understanding of diving physiology. Still, these three undersea living experiments did much to advance man’s knowledge of undersea technology and physiology and were valuable as “proof of concept” constructs. They also did much to publicise oceanographic research and, ironically, usher in an age of ocean conservation through building public awareness. Along with Sealab and others, it spawned a generation of smaller, less ambitious yet longer-term undersea habitats primarily for marine research purposes.

Conshelf I (Continental Shelf Station), constructed in 1962 was the first inhabited underwater habitat. Developed by Jacques-Yves Cousteau to record basic observations of life underwater, Conshelf I was submerged in 10 metres (33 ft) of water near Marseilles and the first experiment involved a team of two spending seven days in the habitat. The two oceanauts, Albert Falco and Claude Wesly, were expected to spend at least five hours a day outside the station and were subject to daily medical exams. 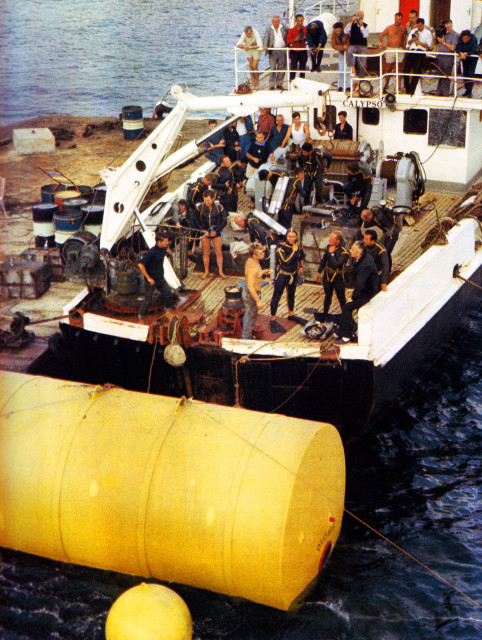 Conshelf I and The Calypso (Cousteau’s research ship) / Photo source 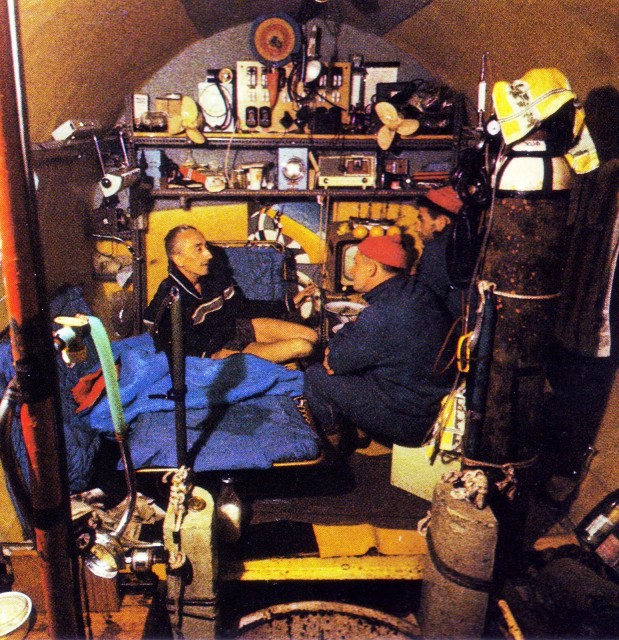 Jacques Cousteau visiting with Falco and Wesly inside the Conshelf I habitat. / Photo source

Conshelf Two, the first ambitious attempt for men to live and work on the sea floor, was launched in 1963. In it, half-dozen oceanauts lived 10 metres (33 ft) down in the Red Sea off Sudan in a starfish-shaped house for 30 days. The undersea living experiment also had two other structures, one a submarine hangar that housed a small, two-man submarine referred to as the “diving saucer” for its resemblance to a science fiction flying saucer and a smaller “deep cabin” where two oceanauts lived at a depth of 30 metres (100 ft) for a week. 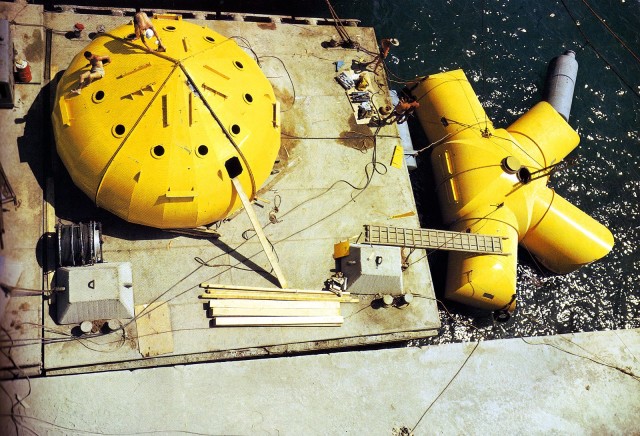 Conshelf II before it was submerged. / Photo source

They were among the first to breathe a mixture of helium and oxygen, avoiding the normal nitrogen/oxygen mixture which when breathed under pressure can cause narcosis. The deep cabin was also an early effort in saturation diving, in which the oceanauts’ body tissues were allowed to become totally saturated by the helium in the breathing mixture, a result of breathing the gases under pressure. Normally, this would prove fatal when the team returned to the surface, at which time reduced pressure would cause the helium to bubble out into the diver’s joints and tissues, afflicting them with the bends. The conventional solution would have been to subject the divers to lengthy and complex decompression; however, in this case the divers’ instead breathed an oxygen-rich mixture of gases for a few hours before returning to the surface in order to purge the excess helium from their tissues. They suffered no apparent ill effects. 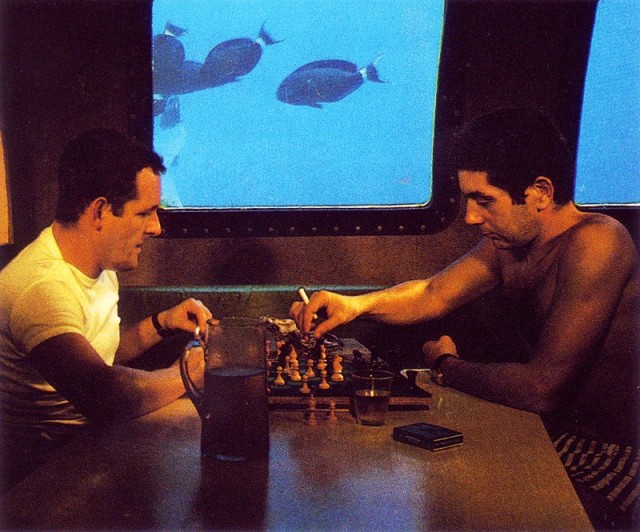 The undersea colony was supported by air, water, food, power, all essentials of life, from a large support team above. The divers made many experiments during their mission. For example, they studied shark behaviour and descended to depths of almost 170 feet using specially designed cages. Cocteau also made a new benchmark in cinematic history during this mission. He journeyed down to 1,000 feet  using a “yellow submarine”. This was the deepest footage at that time. 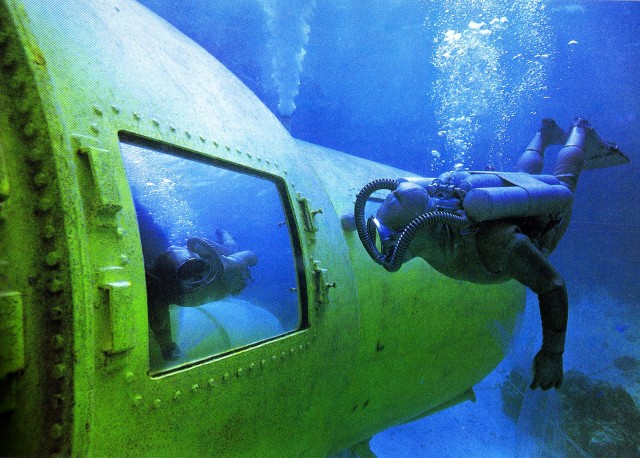 A Calypso Cousteau diver looks in a window on the Conshelf II Starfish house. / Photo source

Conshelf II was a defining effort in the study of diving physiology and technology and captured wide public appeal due to its dramatic “Jules Verne” look and feel. A Cousteau-produced feature film about the effort was awarded an Academy Award for Best Documentary the following year.

Conshelf III was initiated in 1965. Six divers (including Jacques Cousteau’s son Philippe) lived in the habitat at 102.4 metres (336 ft) in the Mediterranean near the Cap Ferrat lighthouse, between Nice and Monaco, for three weeks. In this effort, Cousteau was determined to make the station more self-sufficient, severing most ties with the surface. A mock oil rig was set up underwater, and divers successfully performed several industrial tasks. 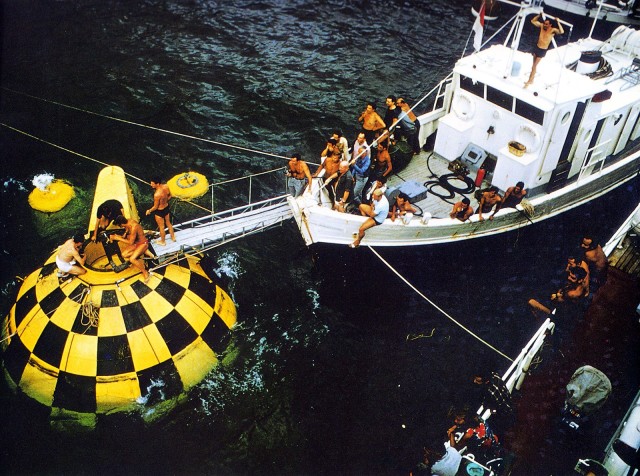 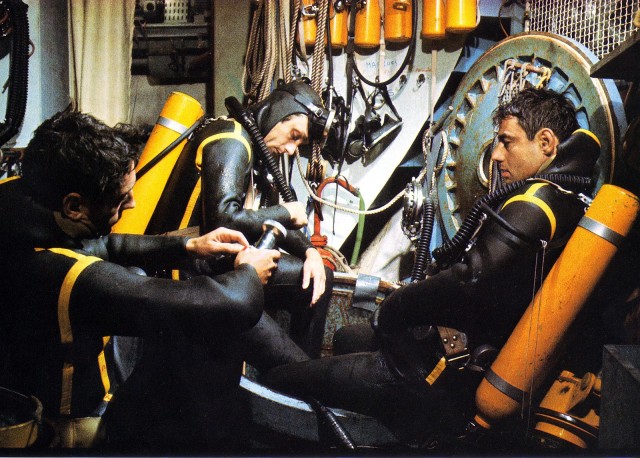 Conshelf III divers checking in their equipment after a daily work dive at close to 400 feet. / Photo source