Nowadays, due to the advanced technology and CGI, is way easier to create the perfect movie set, than it was in the past, where film sets were made by hand, some of them in miniature. Use of scale models in the creation of visual effects by the entertainment industry dates back to the earliest days of cinema. Scale models were often combined with high-speed photography or matte shots to make gravitational and other effects appear convincing to the viewer.Models and miniatures are copies of people, animals, buildings, settings and objects. Miniatures or models are used to represent things that do not really exist, or that are too expensive or difficult to film in reality, such as explosions, floods or fires. While the use of computer generated imagery (CGI) has largely overtaken their use since then, they are still often employed, especially for projects requiring physical interaction with fire, explosions or water. Thanks to Dan Ohlman (the “giant” in the photo above), we now can take a look at the world of making films before the digital era, where miniature sets were often used.

Ohlman, art-curator, and a former cabinet-maker  started making miniature in the 1980’s. He fell in love in this rather distinctive profession and in 1989  decided to house-in his painstakingly created “mini world” in a 16th Century building located in Lyon, France entitled the Palais de la Miniature (The Miniature Palace). The Museum of Miniature And Cinema is a 5-story museum housing 100 miniature film sets.

The hyper realistic sets vary from  the  lavish interior of the iconic  Maxim’s restaurant in Paris, through vintage  charming living room to a murky interior of a prison.

This research work is a major part of the process, as the artist must gather as much information as he can. The fabrication itself can last many months, each element being reproduced at the exact scale using a mix of technical know-how and precision. the website of his museum writes

Movie enthusiasts can go to the Museum and peek into the wonderful tiny marvels and experience the movie world in different dimension.

“The innovative concept of this unique collection, unparalleled in Europe, is to pay homage to the skill and know-how of behind-the-scenes artists from some of most prestigious film studios and companies.More than mere technical achievements, these creations are mirages of their own kind. Their outstanding realism revives one’s memories and exhales a distinct sense of nostalgia,” their website says.

Take a look at some of them. “The subtle lighting arrangement, the painstaking replication of old textures, the use of the same original materials, all contribute to the creation of a moving poetry that resonates with each new miniature panorama.” Onhalm says. 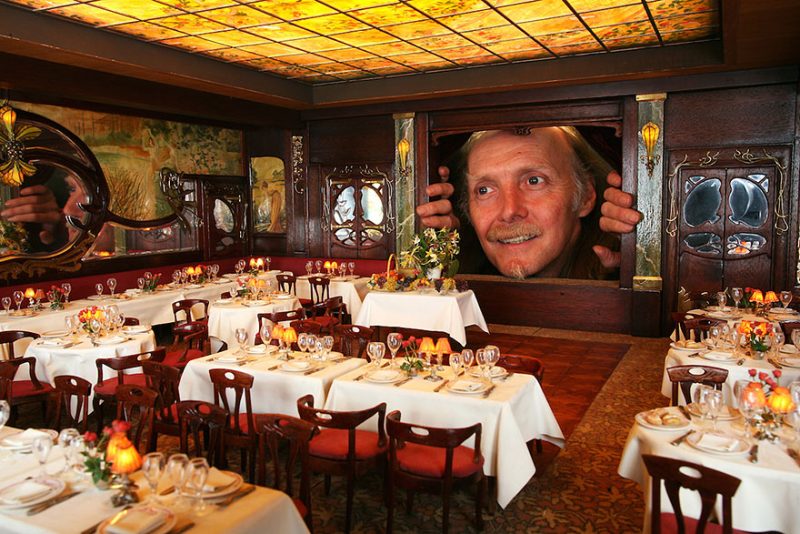 Dan Ohlman peeking in the replica of the famous Parisian restaurant, Maxim’s So in case you are visiting Lyon and you are into movies or miniatures, don’t forget to put this tiny world on your list.

To see more info about the Museum of Miniature and Cinema, visit their official website here.

All photos found at  Museum of Miniature and Cinema,