This footage taken by Thomas Edison in 1904, shows women and men bodybuilding

Bodybuilding developed in the late 19th century, promoted in England by the ‘Father of Modern Bodybuilding, German-born Eugen Sandow. He allowed audiences to enjoy viewing his physique in “muscle display performances”. Although audiences were thrilled to see a well-developed physique, the men simply displayed their bodies as part of strength demonstrations or wrestling matches. Sandow, had a stage show built around these displays through his manager, Florenz Ziegfeld. The Oscar-winning 1936 musical film The Great Ziegfeld, depicts this beginning of modern bodybuilding, when Sandow began to display his body for carnivals.

This footage taken by Thomas Edison  below shows both male and female bodybuilding in 1904. 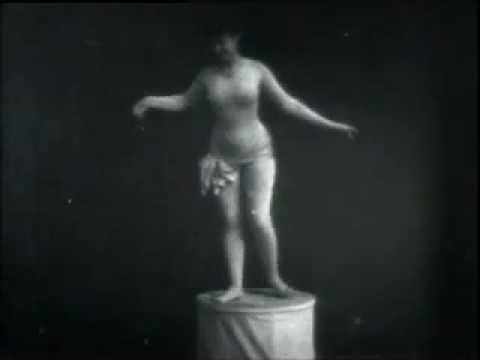 Sandow, was so successful at flexing and displaying his physique that he later created several businesses around his fame, and was among the first to market products branded with his name. He was credited with inventing and selling the first exercise equipment for the masses: machined dumbbells, spring pulleys and tension bands. Even his image was sold by the thousands in “cabinet cards” and other prints.

Sandow was a perfect “gracilian”. This was a standard of ideal body proportions close to those of ancient Greek and Roman statues. Men were judged by how closely they matched these proportions,The Golden One represents some of these statues.

Sandow organised the first bodybuilding contest on September 14, 1901 called the “Great Competition” which was held in the Royal Albert Hall, London, UK. Judged by himself, Sir Charles Lawes, and Sir Arthur Conan Doyle, the contest was a great success and with a capacity crowd many bodybuilding enthusiasts were turned away.The trophy presented to the winner was a gold statue of Sandow sculpted by Frederick Pomeroy. The winner was William L. Murray of Nottingham, England. The silver or spelter, Sandow Trophy was presented to the second-place winner, D. Cooper. The Bronze Sandow Trophy, the most famous of all, was presented to the third-place winner, A.C. Smythe. In 1950, this same bronze trophy was presented to Steve Reeves for winning the inaugural NABBA Mr. Universe. It would not resurface again until 1977 when the winner of the IFBB Mr. Olympia contest, Frank Zane, was presented with the Bronze Sandow Trophy, or at least a replica of it. Since then, Mr. Olympia winners have been awarded a replica of the bronze trophy.

On 16th January 1904, the first large-scale bodybuilding competition in America took place at Madison Square Garden in New York City. The competition was promoted by Bernarr Macfadden, the father of physical culture and publisher of the original bodybuilding magazines including Health & Strength. The winner was Al Treloar and he was declared, “The Most Perfectly Developed Man in the World”. Treloar won a $1,000 cash prize, a substantial sum at that time. Two weeks later, Thomas Edison made a film of Al Treloar’s posing routine. Edison also made two films of Sandow a few years before. Those were the first three motion pictures featuring a bodybuilder. In the early 20th century, Bernarr Macfadden and Charles Atlas, continued to promote bodybuilding across the world. Alois P. Swoboda was also an early pioneer in America.