That time the Soviets bugged the U.S Ambassador’s office & they noticed only after 7 years

The Thing, also known as the Great Seal bug, was one of the first covert listening devices (or “bugs”) to use passive techniques to transmit an audio signal. It was concealed inside a gift given by the Soviets to the US Ambassador to Moscow on August 4, 1945.

The Thing consisted of a tiny capacitive membrane connected to a small quarter-wavelength antenna; it had no power supply or active electronic components. The device, a passive cavity resonator, became active only when a radio signal of the correct frequency was sent to the device from an external transmitter. This is currently referred in NSA parlance as ‘illuminating’ a passive device. Sound waves caused the membrane to vibrate, which varied the capacitance “seen” by the antenna, which in turn modulated the radio waves that struck and were re-transmitted by the Thing. A receiver demodulated the signal so that sound picked up by the microphone could be heard, just as an ordinary radio receiver demodulates radio signals and outputs sound.

Theremin’s design made the listening device very difficult to detect, because it was very small, had no power supply or active electronic components, and did not radiate any signal unless it was actively being irradiated remotely. These same design features, along with the overall simplicity of the device, made it very reliable and gave it a potentially unlimited operational life. 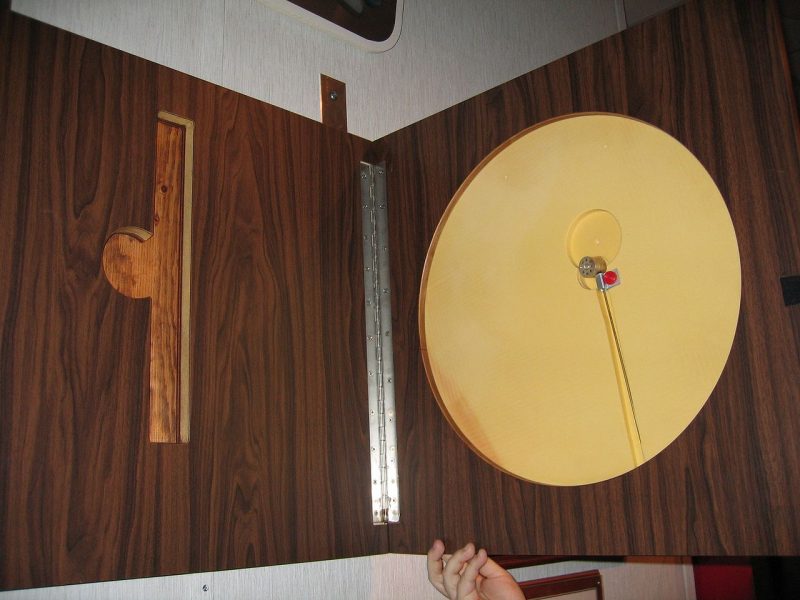 Replica of the Great Seal which contained a Soviet bugging device, on display at the NSA’s National Cryptologic Museum.Source

The existence of the bug was discovered accidentally by a British radio operator at the British embassy who overheard American conversations on an open radio channel as the Soviets were beaming radio waves at the ambassador’s office. An American State Department employee was then able to reproduce the results using an untuned wideband receiver with a simple diode detector/demodulator, similar to some field strength meters.

Two additional State Department employees, John W. Ford and Joseph Bezjian, were sent to Moscow in March 1951 to investigate this and other suspected bugs in the British and Canadian embassy buildings. They conducted a technical surveillance counter-measures “sweep” of the Ambassador’s office, using a signal generator and a receiver in a setup that generates audio feedback (“howl”) if the sound from the room is transmitted on a given frequency. During this sweep, Bezjian found the device in the Great Seal carving. 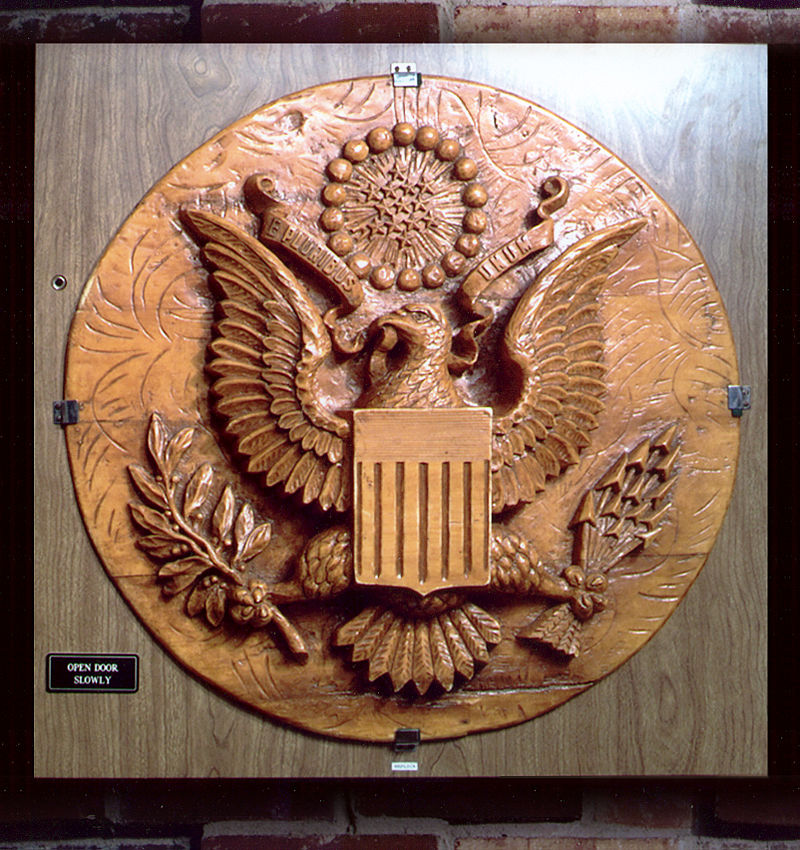 The Central Intelligence Agency set about to analyze the device and hired people from the British Marconi Company to help with the analysis. Marconi technician Peter Wright, a British scientist and later MI5 counterintelligence officer, ran the investigation.He was able to get The Thing working reliably with an illuminating frequency of 800 MHz. (The generator which had discovered the device was tuned to 1800 MHz.)

The membrane of the Thing was extremely thin, and was damaged during handling by the Americans; Wright had to replace it.

The simplicity of the device caused some initial confusion during its analysis; the antenna and resonator had several resonant frequencies in addition to its main one, and the modulation was partially both, amplitude modulated and frequency modulated. The team also lost some time on an assumption that the distance between the membrane and the tuning post needed to be increased to increase resonance. 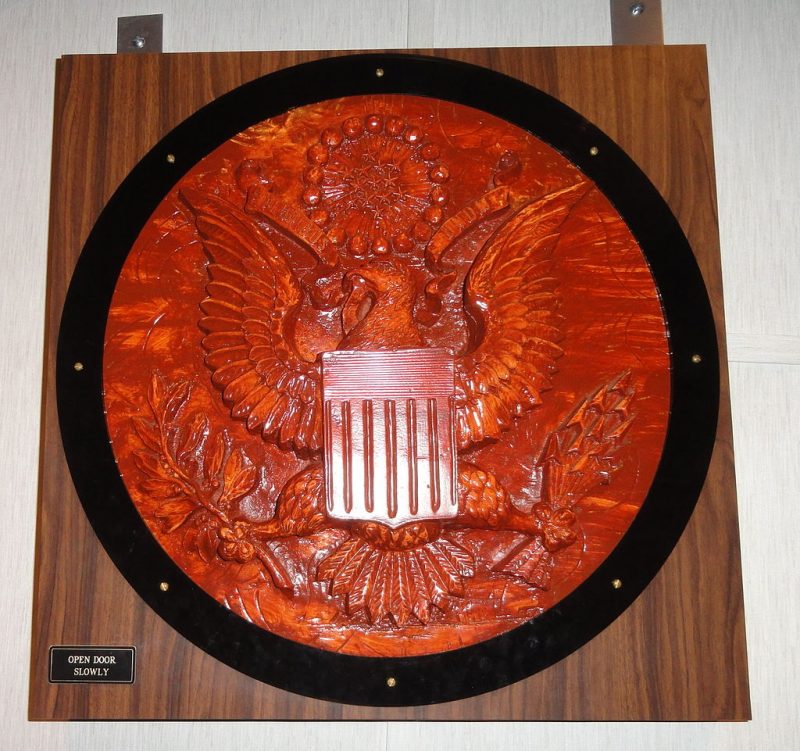 The device consisted of a 9-inch (23 cm) long monopole antenna (quarter-wave for 330 Megahertz(MHz) frequencies, but able to also act as half-wave or full-wave, the accounts differ)—a straight rod, led through an insulating bushing into a cavity, where it was terminated with a round disc that formed one plate of a capacitor. The cavity was a high-Q round silver-plated copper “can”, with the internal diameter of 0.775 in (19.7 mm) and about 11/16 in (17.5 mm) long, with an inductance of about 10 nano-henrys. Its front side was closed with a very thin (3 mil, or 75 micrometers) and fragile conductive membrane. In the middle of the cavity was a mushroom-shaped flat-faced tuning post, with its top adjustable to make it possible to set the membrane-post distance; the membrane and the post formed a variable capacitor acting as a condenser microphone and providing amplitude modulation (AM), with parasitic frequency modulation (FM) for the re-radiated signal. The post had machined grooves and radial lines into its face, probably to provide channels for air flow to reduce pneumatic damping of the membrane. The antenna was capacitively coupled to the post via its disc-shaped end. The total weight of the unit, including the antenna, was 1.1 ounce (31 grams).

The original device was located with the can under the beak of the eagle on the Great Seal presented to W. Averell Harriman (see below); accounts differ on whether holes were drilled into the beak, to allow sound waves to reach the membrane. Other sources say the wood behind the beak was undrilled but thin enough to pass the sound, or that the hollowed space acted like a soundboard to concentrate the sound from the room onto the microphone. 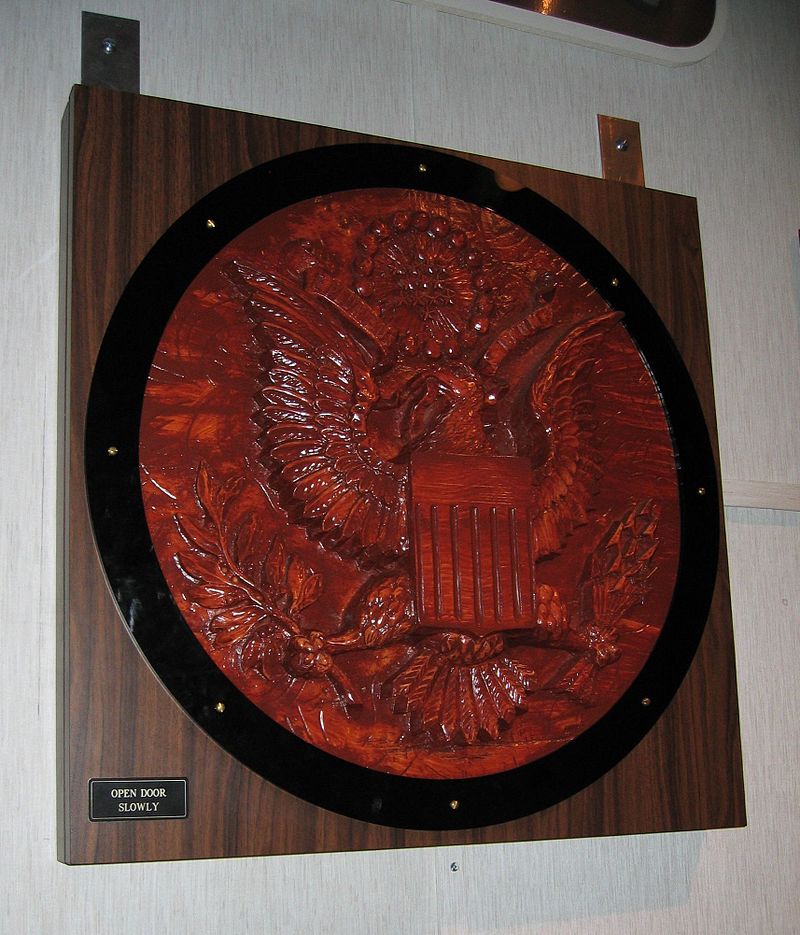 Wright’s examination led to the development of a similar British system codenamed SATYR, used throughout the 1950’s by the British, Americans, Canadians and Australians.

There were later models of the device, some with more complex internal structure (the center post under the membrane attached to a helix, probably to increase Q), and some American models with dipole antennas. Maximizing the Q-factor was one of the engineering priorities, as this allowed higher selectivity to the illuminating signal frequency, and therefore, higher operating distance and also higher acoustic sensitivity.

In 1960, The Thing was mentioned on the fourth day of meetings in the United Nations Security Council, convened by the Soviet Union over the 1960 U-2 incident where a U.S. spy plane had entered their territory and been shot down. The U.S. ambassador showed off the bugging device in the Great Seal to illustrate that spying incidents between the two nations were mutual and to allege that Nikita Khrushchev had magnified this particular incident out of all proportion as a pretext to abort the 1960 Paris Summit