Dynasphere: the giant mono-wheel electric car from the 30’s that never left its prototype stage …

When the humans invented the wheel it was the beginning of a long and a rather bizarre list of vehicle designs. One of those, crazy and in a way ingenious attempts for an innovative vehicle was the 1930’s giant monowheel called the Dynasphere patented by J. A. (John Archibald) Purves from Taunton, Somerset, UK.

The idea for this bizarre and in  a strange way an awesome vehicle that was also nicknamed “Jumbo” came out as an inspiration from a sketch made by Leonardo da Vinci. Purves designed the mono-wheeled electric car together with his son and tested it out on Brean Sands, near Weston-super-mare.

A witness said, ” As a lad I lived in Weston.One day in the 1930s  I went to the beach and saw a man trying to ride a huge wheel across the sands.it wasn’t very successful and wobbled about. I have always wondered what it was or whether I imagined it.

Two prototypes were initially built: a smaller electrical model, and one with a gasoline motor that attained either 2.5 or 6  horsepower depending on the source consulted, using a two-cylinder air-cooled Douglas engine with a three-speed gearbox, also providing reverse. The Dynasphere model reached top speeds of 25–30 miles per hour (40–48 km/h).The gasoline-powered prototype was 10-foot (3.0 m) high and built of iron latticework that weighed 1,000 pounds (450 kg). The next generation version had ten outer hoops, covered with a leather lining, shaped to present a small profile to the ground. 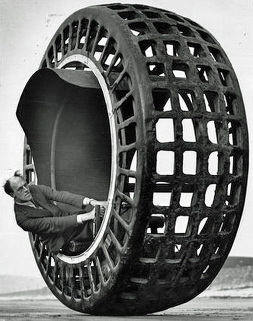 The driver’s seat and the motor were part of one unit, mounted with wheels upon the interior rails of the outer hoop. The singular driving seat and motor unit, when powered forward, would thus try to “climb” up the spherical rails, which would cause the lattice cage to roll forward. Steering of the prototype was crude, requiring the driver to lean in the direction sought to travel, though Purves envisioned future models equipped with gears that would shift the inner housing without shifting, thus tipping the Dynasphere in the intended direction of travel. The later ten-hoop model had a steering wheel engaging such tipping gears and was captured in a 1932 Pathé newsreel, in which the vehicle’s advantages are first described and then demonstrated at the Brooklands motor racing circuit. A novelty model was later constructed by Purves that could seat eight passengers, the “Dynasphere 8”, made specifically for beach use.source

Purves was optimistic about his invention’s prospects. As reported in a 1932 Popular Science magazine article, after a filmed test drive in 1932 on a beach in Weston-super-Mare, Somerset, he stated that the Dynasphere “reduced locomotion to the simplest possible form, with  a consequent economy of power”, and that it was “the high-speed vehicle of the future”.  An article in the February 1935 issue of Meccano Magazine noted that though the Dynasphere was only at an experimental stage, “it possesses so many advantages that we may eventually see gigantic wheels similar to that shown on our cover running along our highways in as large numbers as motor cars do to-day.” 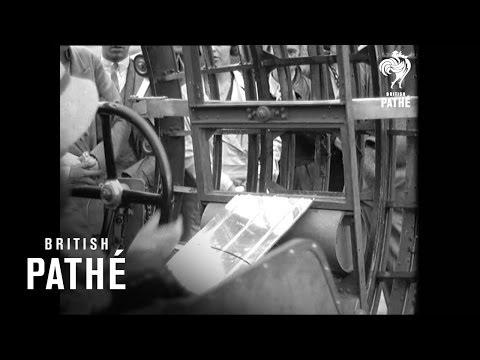 According to the 2007 book Crazy Cars, one reason the Dynasphere did not succeed was that “while the [vehicle] could move along just fine, it was almost impossible to steer or brake.”  Another aspect of the vehicle that received criticism was the phenomenon of “gerbiling”—the tendency when accelerating or braking the vehicle for the independent housing holding the driver within the monowheel to spin within the moving structure.
« The oldest footage of college football between Princeton and Yale taken in 1903 by Thomas Edison
Color photos of ‘ethnic exotic’ from around the world in the early 20th century »