Even after the emergence of the professional National Football League (NFL), college football remained extremely popular throughout the U.S.Although the college game has a much larger margin for talent than its pro counterpart, the sheer number of fans following major colleges provides a financial equalizer for the game, with Division I programs – the highest level – playing in huge stadiums, six of which have seating capacity exceeding 100,000. In many cases, college stadiums employ bench-style seating, as opposed to individual seats with backs and arm rests. This allows them to seat more fans in a given amount of space than the typical professional stadium, which tends to have more features and comforts for fans. (Only two stadiums owned by U.S. colleges or universities – Papa John’s Cardinal Stadium at the University of Louisville and FAU Stadium at Florida Atlantic University – consist entirely of chairback seating.) 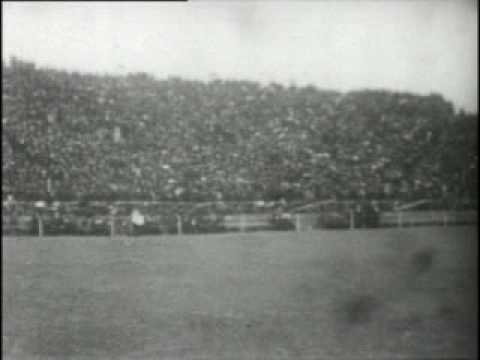 Early games appear to have had much in common with the traditional “mob football” played in England. The games remained largely unorganized until the 19th century, when intramural games of football began to be played on college campuses. Each school played its own variety of football. Princeton University students played a game called “ballown” as early as 1820. A Harvard tradition known as “Bloody Monday” began in 1827, which consisted of a mass ballgame between the freshman and sophomore classes. In 1860, both the town police and the college authorities agreed the Bloody Monday had to go. The Harvard students responded by going into mourning for a mock figure called “Football Fightum”, for whom they conducted funeral rites. The authorities held firm and it was a dozen years before football was once again played at Harvard. Dartmouth played its own version called “Old division football”, the rules of which were first published in 1871, though the game dates to at least the 1830s. All of these games, and others, shared certain commonalities. They remained largely “mob” style games, with huge numbers of players attempting to advance the ball into a goal area, often by any means necessary. Rules were simple, violence and injury were common.The violence of these mob-style games led to widespread protests and a decision to abandon them. Yale, under pressure from the city ofNew Haven, banned the play of all forms of football in 1860.

American football historian Parke H. Davis described the period between 1869 and 1875 as the ‘Pioneer Period’; the years 1876–93 he called the ‘Period of the American Intercollegiate Football Association’; and the years 1894–1933 he dubbed the ‘Period of Rules Committees and Conferences’

On November 6, 1869, Rutgers University faced Princeton University (then known as the College of New Jersey) in the first-ever game of intercollegiate football. It was played with a round ball and, like all early games, used a set of rules suggested by Rutgers captain William J. Leggett, based on the Football Association’s first set of rules, which were an early attempt by the former pupils of England’s public schools, to unify the rules of their public schools games and create a universal and standardized set of rules for the game of football and bore little resemblance to the American game which would be developed in the following decades. It is still usually regarded as the first game of college football.The game was played at a Rutgers field. Two teams of 25 players attempted to score by kicking the ball into the opposing team’s goal. Throwing or carrying the ball was not allowed, but there was plenty of physical contact between players. The first team to reach six goals was declared the winner. Rutgers won by a score of six to four. A rematch was played at Princeton a week later under Princeton’s own set of rules (one notable difference was the awarding of a “free kick” to any player that caught the ball on the fly, which was a feature adopted from the Football Association’s rules; the fair catch kick rule has survived through to modern American game). Princeton won that game by a score of 8 – 0. Columbia joined the series in 1870, and by 1872 several schools were fielding intercollegiate teams, including Yale and Stevens Institute of Technology.

Columbia University was the third school to field a team. The Lions traveled from New York City to New Brunswick on November 12, 1870 and were defeated by Rutgers 6 to 3. The game suffered from disorganization and the players kicked and battled each other as much as the ball. Later in 1870, Princeton and Rutgers played again with Princeton defeating Rutgers 6-0. This game’s violence caused such an outcry that no games at all were played in 1871. Football came back in 1872, when Columbia played Yale for the first time. The Yale team was coached and captained by David Schley Schaff, who had learned to play football while attending Rugby school. Schaff himself was injured and unable to the play the game, but Yale won the game 3-0 nonetheless. Later in 1872, Stevens Tech became the fifth school to field a team. Stevens lost to Columbia, but beat both New York University and City College of New York during the following year.

By 1873, the college students playing football had made significant efforts to standardize their fledgling game. Teams had been scaled down from 25 players to 20. The only way to score was still to bat or kick the ball through the opposing team’s goal, and the game was played in two 45 minute halves on fields 140 yards long and 70 yards wide. On October 20, 1873, representatives from Yale, Columbia, Princeton, and Rutgers met at the Fifth Avenue Hotel in New York City to codify the first set of intercollegiate football rules. Before this meeting, each school had its own set of rules and games were usually played using the home team’s own particular code. At this meeting, a list of rules, based more on the Football Association’s rules than the rules of the recently founded Rugby Football Union, was drawn up for intercollegiate football games.