Over the picturesque village of Cerne Abbas in Dorset, England, there is a rather unusual sight of an imposing 180-foot figure carved in solid lines from chalk on the vast green hill. The gigantic naked man holding a 120-foot club in his right-hand goes by the simple name ‘Cerne Abbas Giant.’

The most perceptible and eye-catching part of the Cerne’s Giant is, of course, the club in his right hand, naah we are kidding, his enormous 30-ft penis.  Due to the exposed, gigantic ding-dong, the giant also got the nickname “The Rude Man from Cerne.” 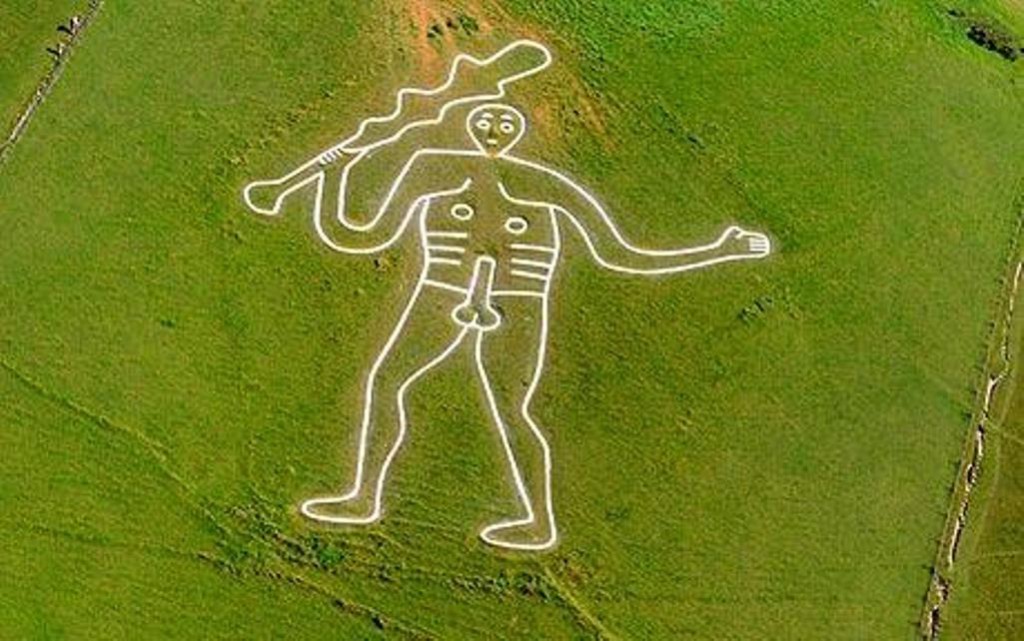 Naturally, over the years, there were many failed attempts to remove or at least ‘cover’ the explicit part. One of the first attempts was in 1774 when a coppice worker tried to remove the giant’s phallus.  There was also a letter sent to the Dorset Magazine, suggesting that the giant’s genitalia could be covered with a piece of cloth, ( that would be one big piece of cloth).

Luckily, for the sake of the archeologists, tourists, and the middle-aged ladies, the giant’s penis remained untouched.

What is fascinating and a bit frustrating about the explicit hill figure is the fact that no one knows who put it there or when, there is no trace of, or evidence about his origins, just speculations, and theories. 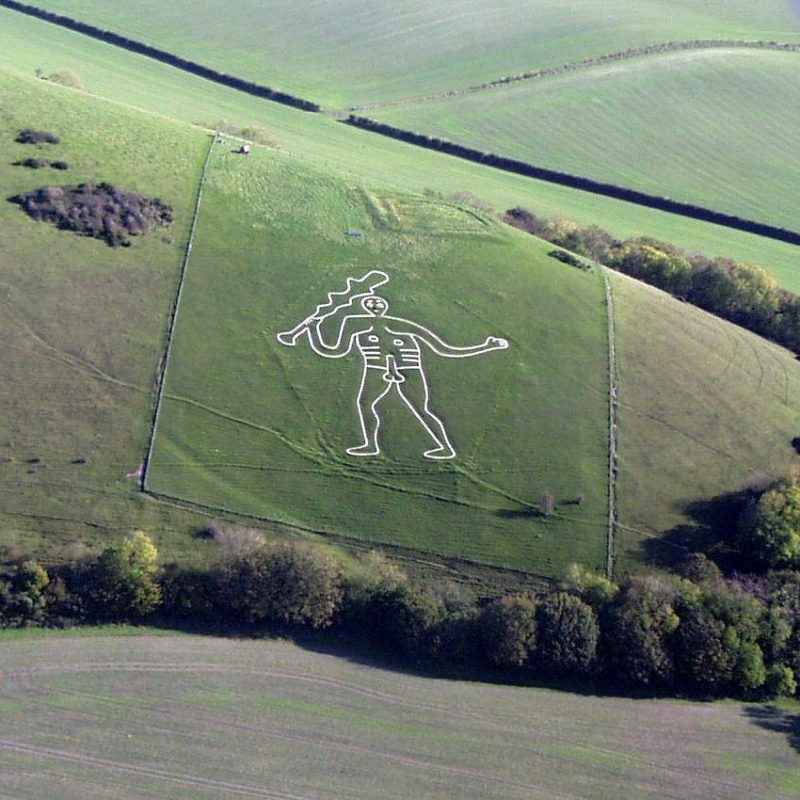 There is an old belief that the Giant was a symbol of a fertility cult ( we wonder why), but there are very few traces and evidence that can prove that. However,  a very strange natural phenomenon that occurs every spring on the 1st of May triggers a lot of legends and stories.  In the dawn of May, the sun rises in exact line with the observer who stands in the line of the giant’s erected penis. 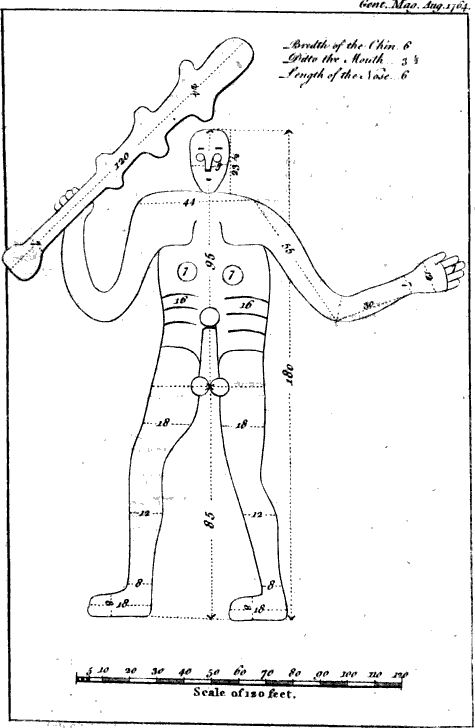 1764, first known drawing from the Gentleman’s Magazine with measurements, including the height of 180 feet>Source

Consequently, there were countless of legends related to this phenomenon. For instance, women who are afraid to lose their husbands or lovers should walk around the figure, hoping that he will help them to keep their men. Other legend claims, that brides to be should visit the giant one week before the wedding for good fortune.  The people from Cerne Abbas believe that childless women will regain their fertility if they sleep within the confines of the giant phallus, and young couples should make love on the giant to ensure conception. Call us superstitious, but statistics shows that the women living near the carving have an average of three children in their lifetime – a national record. 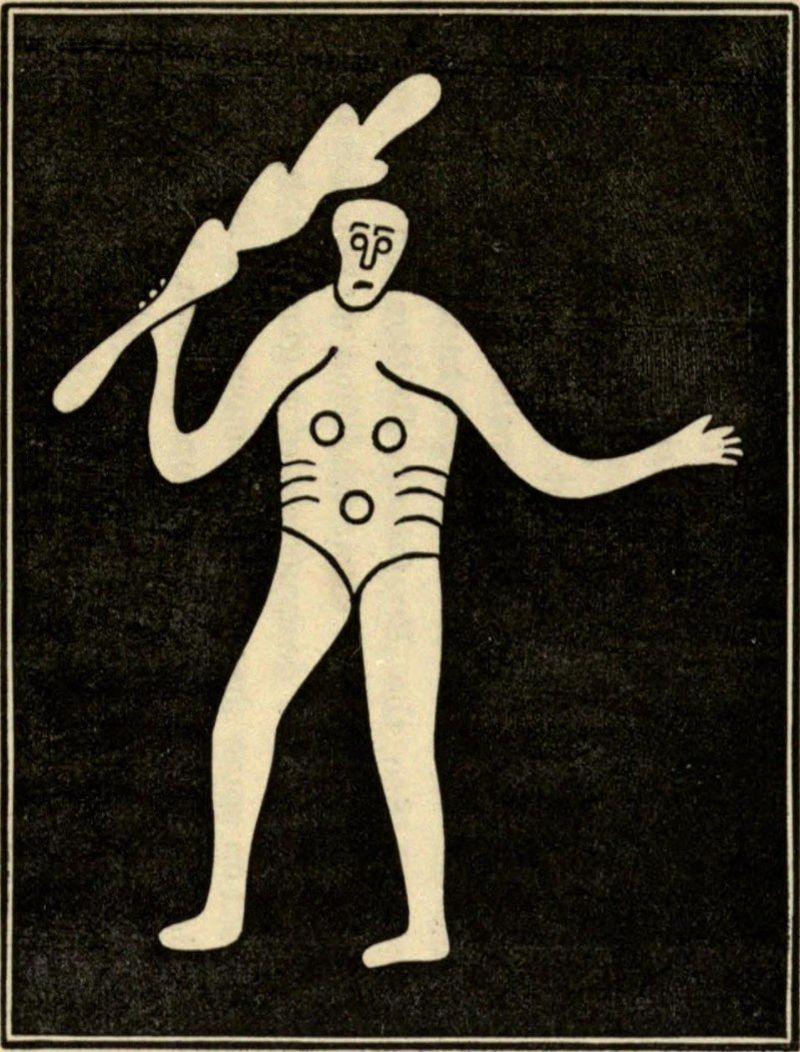 1892 drawing by the author and antiquarian, William Plenderleath.Source

There are many other theories as to when and why the giant was created, one of the most popular is that he is the Greek-Roman god Hercules, who is often represented with a club. Early antiquarians associated it, on little evidence, with a Saxon deity, while other scholars sought to identify it with a Celtic British figure or some syncretization of the two. Archeological evidence has been lost over time strengthen the Hercules identification. However, the lack of earlier descriptions leads modern scholars to conclude that it may date from the 17th century and perhaps originated as political satire.

Regardless of its age, identity or origin the Cerne Abbas Giant has become an important part of local culture and folklore,  It is one of England’s best-known hill figures and is a major visitor attraction in the region.

So, next time you are in Dorset, visit the ‘gifted’ giant, walk around it, sleep on it or whatever takes your fancy!