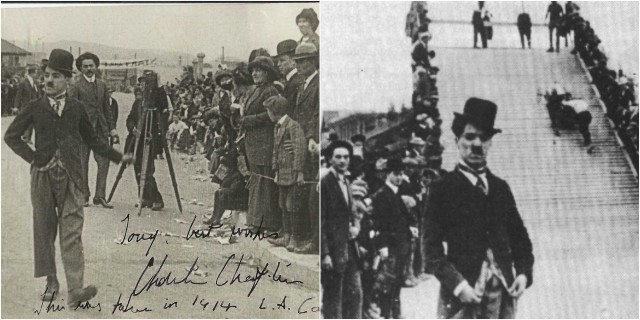 Sir Charles Spencer “Charlie” Chaplin,  (16 April 1889 – 25 December 1977) was an English comic actor, filmmaker, and composer who rose to fame in the silent era. Chaplin became a worldwide icon through his screen persona “the Tramp” and is considered one of the most important figures in the history of the film industry. His career spanned more than 75 years, from childhood in the Victorian era until a year before his death in 1977, and encompassed both adulation and controversy

In February 1914, Mack Sennett’s Keystone released the movie Kid Auto Races at Venice (also known as The Pest) where Charlie Chaplin wears his tramp costume for the first time in a film exhibited in front of public.

When Chaplin was still creating his now iconic on-screen persona “Little Tramp,” he wanted to achieve a rather complex fella; a tramp, a gentleman, a poet, a dreamer, a lonely fellow, always hopeful of romance and adventure.  himself, the costume lasted on-screen more than 22 years.

Check out the photos below. 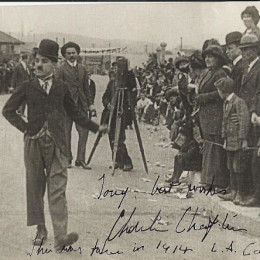 The Tramp (Charlot in several languages), also known as The Little Tramp, was British actor Charlie Chaplin’s most memorable on-screen character and an icon in world cinema during the era of silent film. 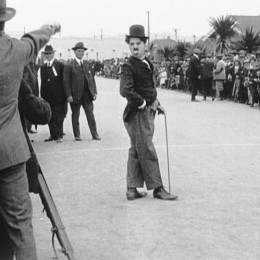 The character of the Tramp was originally created by accident while Chaplin was working at Mack Sennett’s Keystone Studios when dressing up for the short film Mabel’s Strange Predicament starring Mabel Normand and Chaplin. That was actually the first film featuring the Tramp but a different film, shot later but with the same character, happened to be released two days earlier. The Tramp debuted to the public in the Keystone comedy Kid Auto Races at Venice (released on February 7, 1914; Mabel’s Strange Predicament, shot earlier, was released on February 9, 1914). Chaplin, with his Little Tramp character, quickly became the most popular star in Keystone director Mack Sennett’s company of players. Chaplin continued to play the Tramp through dozens of short films and, later, feature-length productions (in only a handful of other productions did he play characters other than the Tramp). 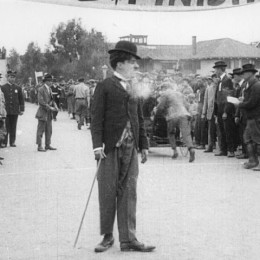 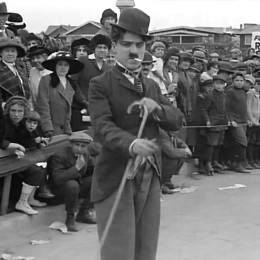 The Tramp was closely identified with the silent era, and was considered an international character; when the sound era began in the late 1920’s, Chaplin refused to make a talkie featuring the character. Another reason was, the character was supposed to be American, and Chaplin himself had a strong and obvious British accent. The 1931 production City Lights featured no dialogue. Chaplin officially retired the character in the film Modern Times (released February 5, 1936), which appropriately ended with the Tramp walking down an endless highway toward the horizon. The film was only a partial talkie and is often called the last silent film. The Tramp remains silent until near the end of the film when, for the first time, his voice is finally heard, albeit only as part of a French/Italian-derived gibberish song. This allowed the Tramp to finally be given a voice, but not tarnish his association with the silent era.

In The Great Dictator, Chaplin’s first film after Modern Times, Chaplin plays the dual role of a Hitler-esque dictator, and a Jewish Barber. Although Chaplin emphatically stated that the barber was not The Tramp, he retains the Tramp’s moustache, hat, and general appearance. Despite a few silent scenes, including one where the barber is wearing the tramps’ coat and bowler hat and carrying his cane, the barber speaks throughout the film (using Chaplin’s own British accent), including the passionate plea for peace that has been widely interpreted as Chaplin speaking as himself.

Two films Chaplin made in 1915, The Tramp and The Bank, created the characteristics of his screen persona. While in the end the Tramp manages to shake off his disappointment and resume his carefree ways, the pathos lies in The Tramp having a hope for a more permanent transformation through love, and his failure to achieve this.