DUEL!! The best bits of film trivia – the tanker driver was nearly killed when the truck went over the cliff… Duel is a 1971 television thriller film directed by Steven Spielberg and written by Richard Matheson, based on Matheson’s short story of the same name. It stars Dennis Weaver as a terrified motorist stalked on a remote and lonely road by the mostly unseen driver of a mysterious tanker truck. We adore this film – check out some facts and figures about the movie that you may not know………

This movie was shot in less than two weeks. To be sure shooting costs were down to the bare minimum, corners were cut to keep the budget under $500,000 and the projected 10-day shooting schedule intact. Duel’s estimated final budget came in at about $450,000, but principal photography was actually completed in about 12 days instead. Steven Spielberg used this, his first feature film, as a benchmark for how fast he can get a film into the can.

During the chase, a parked sedan resembling a squad car is seen, briefly raising Dennis Weaver’s hopes, but it turns out to be a service car for a pest exterminator named Grebleips… “Spielberg” in reverse.

The villain in the film has no speaking part. Knowing that fear of the unknown is usually what scares people the most, Spielberg decided that the truck driver’s voice would not be heard nor his (her?) face ever seen by the viewer. The truckers’s eerie, almost supernatural presence is perhaps the most unsettling attribute of the movie. Much of the movie was filmed in and around the communities of Canyon Country, Agua Dulce, and Acton, California. In particular, sequences were filmed on Sierra Highway, Agua Dulce Canyon Road, Soledad Canyon Road, and Angeles Forest Highway. Many of the landmarks from Duel still exist today, including the tunnel, the railroad crossing, and Chuck’s Café, where Mann stops for a break. The building, which since 1980 has housed a French restaurant called Le Chene, is currently still on Sierra Highway.

The phone number Dennis Weaver dials to call his wife at the gas station is not the standard “555” movie prefix but, at the time, a valid number.

‘Chuck’s Cafe’, the truckstop at which a frazzled Mann tries to pick out the seemingly psychotic driver, looks much the same but has been transformed into an upmarket French restaurant. Not quite what you expect to find out in the desert wilderness. It’s Le Chene, 12625 Sierra Highway, Agua Dulce.

The climax of the film was done in one take. Originally, when Duel was a telefilm and had not yet become a full-fledged theatrical feature, the budget had to kept down, and losing more than one 1955 Peterbilt oil truck was not an option. To add real drama to the actual filming, when a mechanical malfunction caused the truck to waver from its intended straight line of action, the driver–who was committed to another job the following day–did not halt the truck, but instead stayed in the driver’s seat, jumping out only at the last moment before the vehicle goes over a cliff. In the final production, viewers saw an unintended open door as the truck makes its fatal leap.

Spielberg had what he called an “audition” for the truck, wherein he viewed a series of trucks to choose the one for the film. He selected the older 1955 Peterbilt 281 over the then-current flat-nosed “cab-over” style of trucks because the long hood of the Peterbilt, coupled to its split windshield and round headlights, gave it more of a “face”, adding to its menacing personality.

Steven Spielberg said that the multiple license plates on the front bumper of the truck suggested that the truck driver is a serial killer which “ran down other drivers in other states”. The truck had twin rear axles, a Cummins NTC 350 turbocharged engine with a 5-speed main transmission and a 3-speed auxiliary transmission, making it capable of hauling loads over 30 tons and top speeds reaching 75-80 mph. During the original filming, the crew only had one truck, so the final scene of the truck falling off the cliff had to be completed in one take.

Steven Spielberg can be seen reflected in the telephone booth during the scene where David Mann is calling the police. During his appearance on _”Inside the Actors Studio” (1999) (#5.9)_qv Spielberg admitted that this was not an intentional cameo, but instead was a mistake. He went on to state that several similar mistakes were revealed when the movie received a theatrical release in Europe, with 18 different occurrences where Spielberg could be seen because of the change in aspect ratio for theatrical release.

To be sure shooting costs were down to the bare minimum, corners were cut to keep the budget under $500,000 and the projected 10-day shooting schedule intact. Duel’s estimated final budget came in at about $450,000, but principal photography was actually completed in about 12 days instead.

Near the end of the film, while Dennis Weaver is finally starting to get a good lead on the truck, the top of director Steven Spielberg’s head is visible in the reflection of the back seat in the rear-view mirror. There is an elderly couple who drive by in a red car. The woman yells at the man to keep driving. A similar couple in a red car acts out the same ordeal in Back to the Future (1985), of which Steven Spielberg was the Executive Producer.

The Valiant’s red color was also intentional; Spielberg did not care what kind of car was used in the film but wanted it to be a red car to enable the vehicle to stand out in the wide shots of the desert highway.

While filming the shot where the truck drives off the cliff, a piece of machinery designed to keep the truck traveling in a straight line without a driver failed. Instead of calling a halt, the driver, who had an important engagement the next day and didn’t want to miss it, stayed in the driving seat and only jumped out at the very last second before the truck went over.

At the film’s climax, , an unnatural monstrous, animal-like roar can be heard as the truck crashes over the cliff. Spielberg added this as he wanted to give a final suggestion of the supernatural to the truck and its driver.

The film’s success enabled Spielberg to establish himself as a film director.

The “Snakerama” gas station seen in the film was used as a homage to Duel by Spielberg in his comedy film, 1941 (1979), with Lucille Benson again appearing as the proprietor.

Check out the gorgeous sound of the gear change around 2:11!!!! 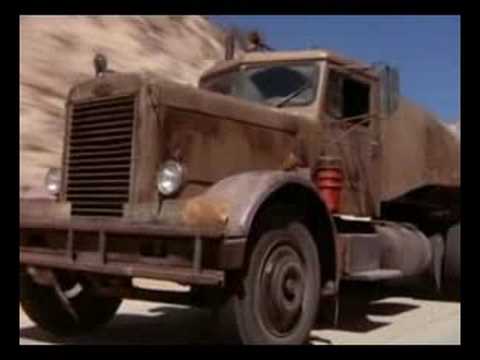