Flow researchers at the Aerodynamic Research Institute (Aerodynamischen Versuchsanstalt; AVA) in Göttingen unveiled a car that for many years was considered the quintessential execution of aerodynamic design in vehicle construction.

The Schlörwagen (nicknamed “Egg” or “Pillbug”) was a prototype aerodynamic rear-engine passenger vehicle developed by Karl Schlör (1911–1997) and presented to the public in 1939. Schlör, an engineer for Krauss-Maffei of Munich, proposed an ultra-low drag coefficient body as early as 1936. Under Schlör’s supervision at the AVA (an Aerodynamic testing institute in Göttingen) a model was built. 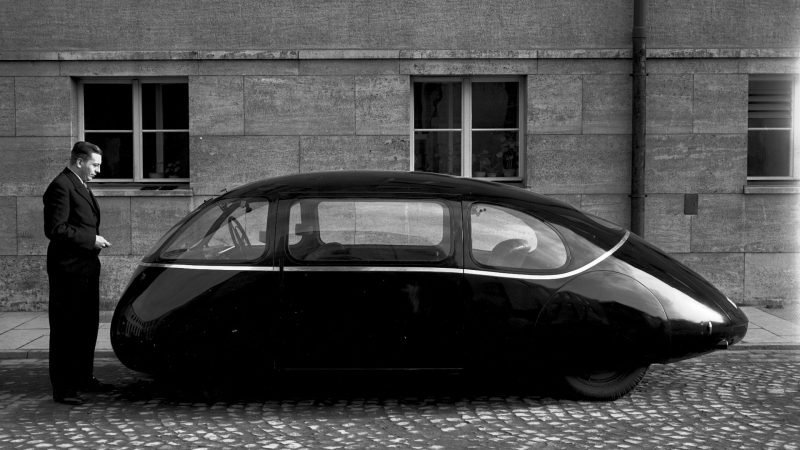 The Schlörwagen was an experimental vehicle that caused quite a stir in 1939. Its aerodynamic performance, expressed as its drag coefficient (Cd value), was a mere 0.186 and, therefore, a real sensation. Subsequent measurements that Volkswagen conducted on a model during the 1970’s, confirmed the Schlörwagen’s Cd of just 0.15. Modern cars possess Cd values of between 0.24 and 0.3 and, therefore, do not come close to the Schlörwagen’s perfectly tailored aerodynamic shape. Only modern experimental vehicles such as the Volkswagen ‘1- litre car’ or the ETH Zürich ‘PAC-Car II’ have lower Cd values. 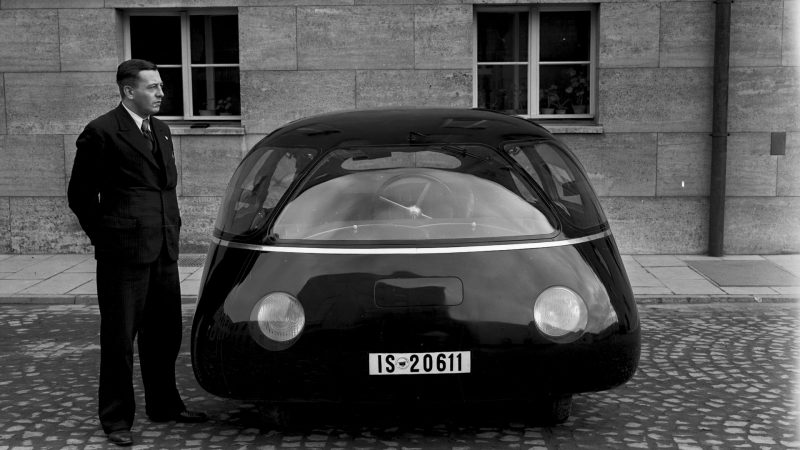 Schlörwagen from the front. source

Inspired by the shape of airplane wings, he redesigned the exterior, setting the windows flush with the shell for cleaner airflow and extending the body over the front wheels. “Basically, the Schlörwagen is a wing on wheels,” says Andreas Dillmann, head of the Institute of Aerodynamics and Flow Technology at the German Aerospace Center (DLR), the successor to the Aerodynamischen Versuchsanstalt. 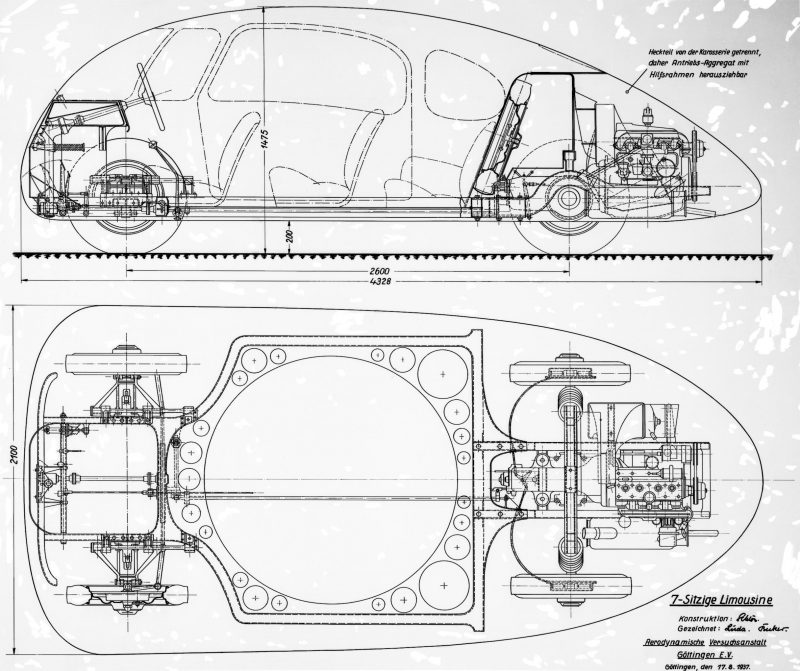 In selecting the basic shape of the vehicle, Schlör chose two aircraft wing profiles that offered particularly low air resistance. To ensure that this favourable aerodynamic form was disturbed as little as possible, the body was extended outward as far as possible to enable the front wheels to turn within the body of the vehicle. As a consequence, the vehicle had a width of 2.10 meters. The engineers accepted that this width would produce a slightly greater drag. The floor of the vehicle was smooth, while the windows were installed flush with the outer shell. 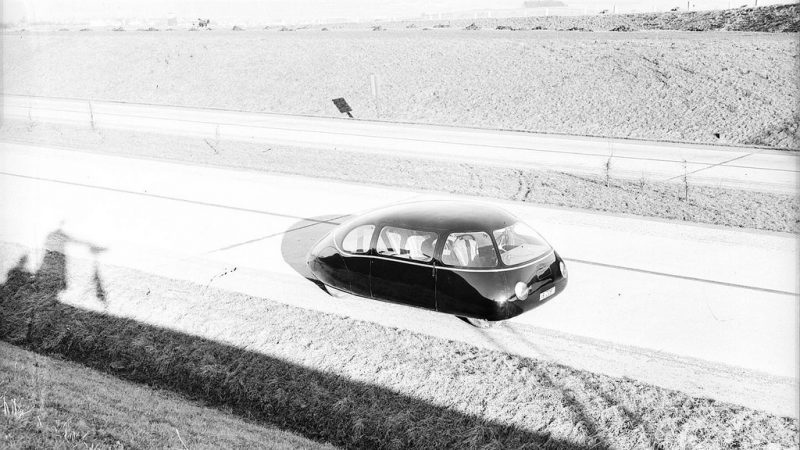 Test drive on the highway. source

During 1939, the Schlörwagen was put through its paces in a series of tests conducted on the recently completed highway near Göttingen, the forerunner of today’s A7. The production car on which it was based, a Mercedes 170 H, achieved a maximum speed of around 105 kilometres per hour, while the aerodynamic version recorded a remarkable 134 to 136 kilometres per hour. The Schlörwagen consumed eight litres of fuel to drive 100 kilometres while the production car used 10 to 12 litres – equivalent to a reduction of between roughly 20 and 35 percent. 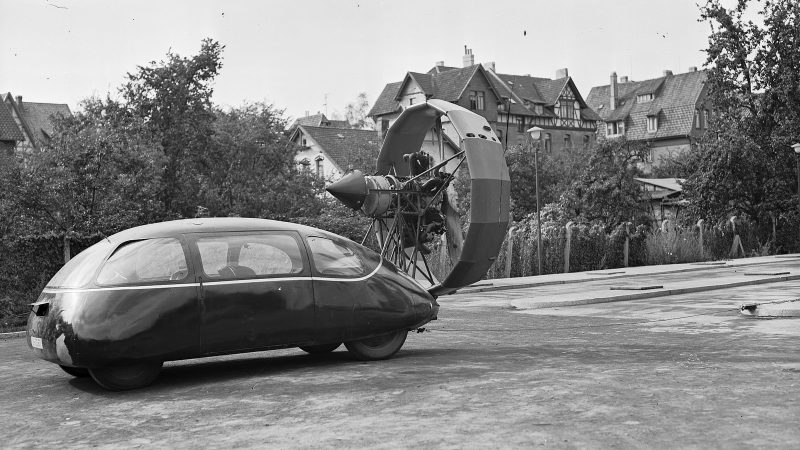 Subsequent wind tunnel tests yielded a drag coefficient of only 0.113, incredible then and still extremely impressive today. For a functioning model, a Mercedes-Benz 170H chassis, one of their few rear-engine designs, was used. The aluminum body was built by the Ludewig Brothers of Essen. Subsequent tests of the motorized model showed a slightly higher but still impressive drag coefficient of 0.186. A year later it was unveiled to the public, at the 1939 Berlin Auto Show. 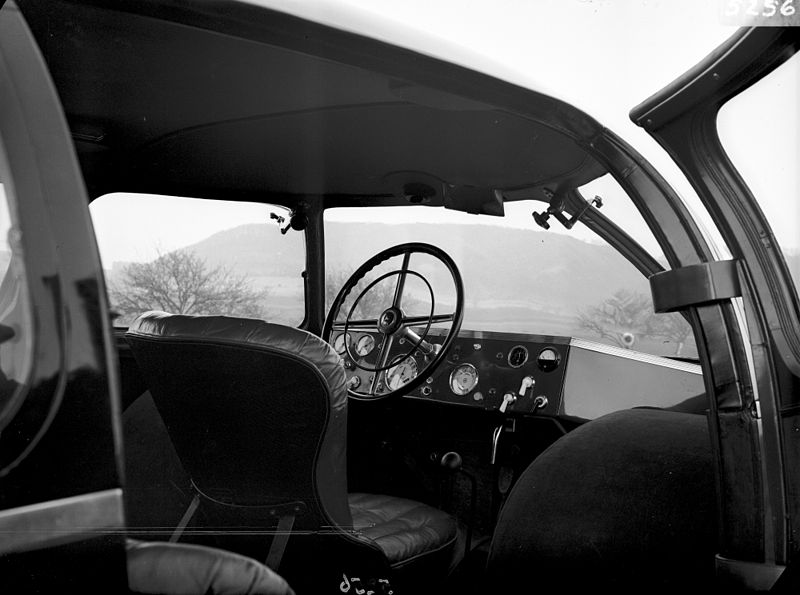 The steering wheel of the Schlörwagen was in the centre of the vehicle. Overall, there was room for seven people. source

The project was shelved with the onset of World War II and mass production was never began. The model was later taken to Russia and fitted with an external propeller engine. The whereabouts of the sole functioning model remain unknown. 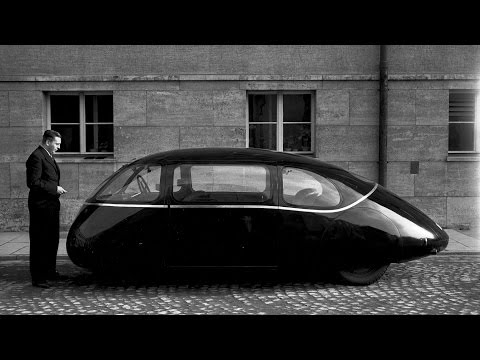