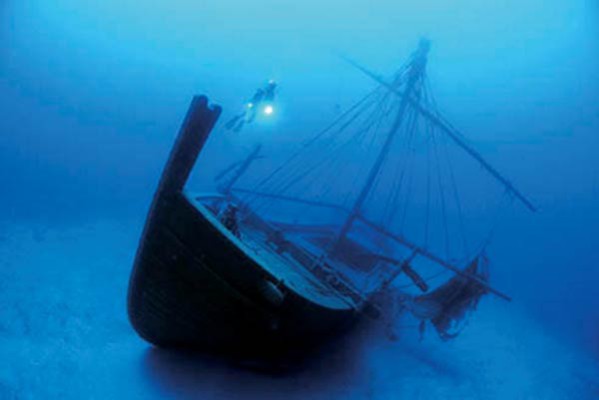 Generally most of us think of shipwrecks as old rotting wood, submerged thousands of feet beneath the ocean surface, with little other than historical value.  Others may think of a rusty piece of metal that has either been abandoned or beached on a shore.

About four decades ago there was a shipwreck discovered near Grand Cape, Turkey.  Historians and researchers believe that the Uluburun is over 3,000 years old.  Currently, it is still one of the oldest shipwrecks ever found.  But it is also one of the wealthiest and largest ships that sailed in the Late Bronze Age in the Mediterranean.

Historians believe  the ship  was carrying over 20 tons of cargo, which would have most likely been a direct order from royalty.  The reason historians believe this is because there were more than 18,000 artifacts uncovered from the site of the ship. Included in the pile of jewels were raw materials and a golden seal of Egyptian Queen Nefertiti.  After more research, the artifacts are believed to have been from seven different cultures, including Mycenaean, Syro-Palestinian, Cypriot, Egyptian, Kassite, Assyrian, and Nubian.

The ship was initially discovered in the early 1980s by a sponge diver, Mehmed Cakir. Trying to excavate the large ship was a major task, but dedicated researchers prevailed.  The investigation and recovery took four months and was conducted by the Institute of Nautical Archaeology.  The whole mission totaled over 22,000 separate dives and took from 1984-1992 to complete.

Uluburun was one of the first known examples of advanced mortise and tenon techniques, where planks were joined by flat pieces of wood inserted into the slots of other planks.  Scientists figure that the primary material of the ship was Lebanese cedar, which is indigenous in only three places, including Turkey, where the ship was found. 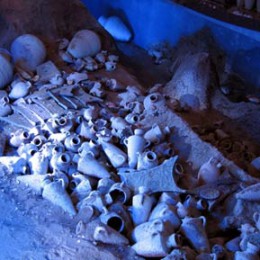 Some of the Cypriot ceramics found on the Uluburun. source.

The cargo, which was mostly Cypriot copper ingots, would have weighed nearly 10 tons.  Some of the ingots were colored blue, turquoise, and lavender.  Historians and researchers believe that this ship carried some of the first known colored glass.  Other items that the ship carried were Canaanite jars for incense, Egyptian ebony, ostrich eggshells, elephant tusks, hippo teeth, seashells, and tortoise shells. 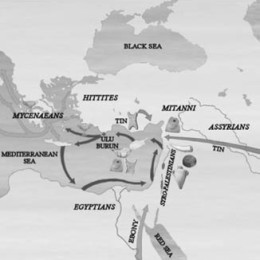 Trade routes in the Eastern Mediterranean during the Bronze Age. source

Still more artifacts included Egyptian pieces made of gold, silver, electrum and stone, Canaanite jewelry, beads made of glass, agate carnelian, quartz, faience and amber, figurines, and a scarab of Queen Nefertiti.  One does not have to be a historian and researcher to know that some of the most precious and fine jewels and artifacts listed were only meant for royalty.

Historians also took into account that there were also some personal possessions of the crew members.  Some of those items included tools, oil lamps, and writing boards.  By looking at the tools, researchers believe that a majority of the crew members were Canaanite or Cypriot, and at least two of them were Mycenaean.

Researchers believe that with such a large cargo, the Late Bronze Age Aegean suggests that many people were part of an international trading system.  They can tell who the gifts were from and what kind of traveling route crew members would have followed.  They suggest that the crews went to the Mediterranean on a circular route from Syro-Palestine to Cyprus, then to the Aegean, and occasionally Sardinia.

To date, this ship is still one of the oldest and wealthiest found.  Not only have researchers gotten an understanding on just how wealthy people were, but they are also getting new insights as to what kind of societies they came from.

« Oh, so thats how they used to build locomotives …
The Schlörwagen or “Pillbug“ – A German futuristic looking experimental aerodynamic vehicle from 1939 … »