Although Abbey Road was an immediate commercial success and reached number one in the UK and US, it received mixed reviews, with some critics describing its music as inauthentic and bemoaning the production’s artificial effects. Many critics now view the album as the Beatles’ best and rank it as one of the greatest albums of all time. 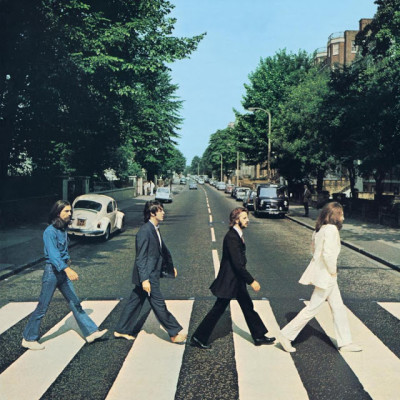 The original title for the album “Everest” (after a brand of cigarettes smoked by Geoff Emerick, one of the engineers). The packets had a silhouette of Mount Everest on them and The Beatles liked the imagery. However, the idea was dropped as none of The Beatles wanted to travel to Nepal for a cover shoot.

2. Suggestion for the cover shot 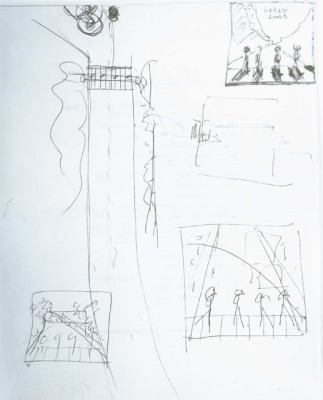 The front cover design, a photograph of the group traversing a zebra crossing, was based on sketched ideas by McCartney. source

Initially, the band intended to take a private plane over to the foothills of Mount Everest to shoot the cover photograph. But as they became ever more impatient to finish the album, Paul McCartney suggested they just go outside, take the photo there and name the album after the street. 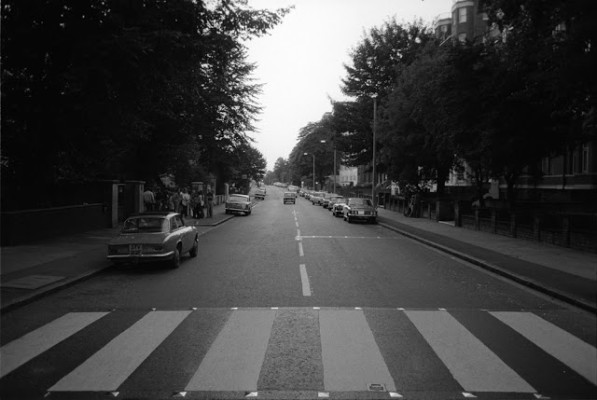 The photo was taken on 8th August 1969 outside EMI Studios on Abbey Road. At around 11:30 that morning, freelance photographer Iain Macmillan, who was a friend to John Lennon and Yoko Ono, was given only ten minutes to take the photo whilst he stood on a step-ladder and a policeman held up the traffic.

4. The cover picture was taken about 6 times.

The band crossed the road a number of times while Iain Macmillan photographed them. Shortly after the shoot, Paul chose the fifth one for the album cover. 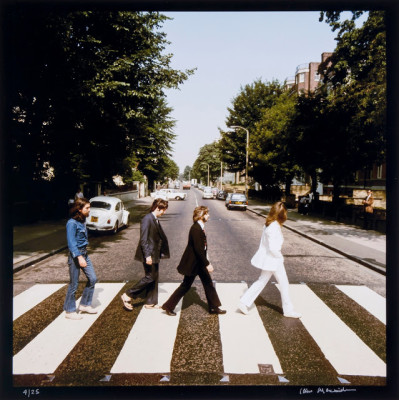 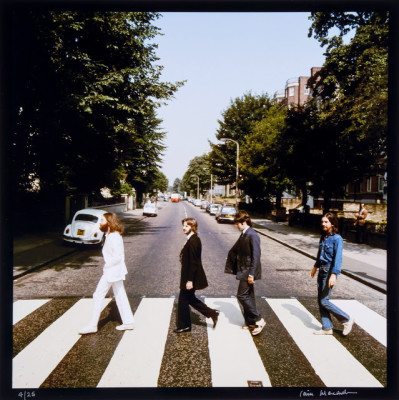 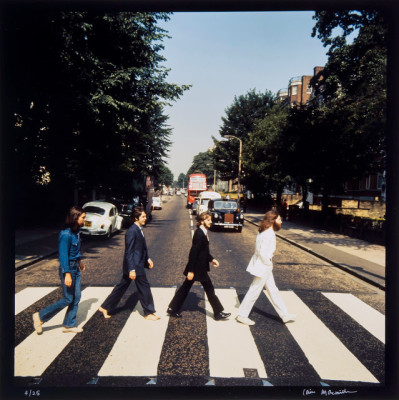 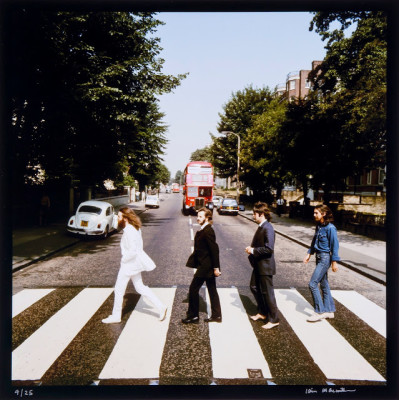 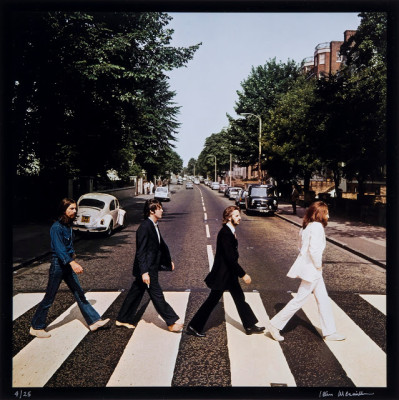 Photo 5 – a limited edition print, as the album cover. For publication, the photo had some color corrections, and also possibly the very blue sky was painted in. source 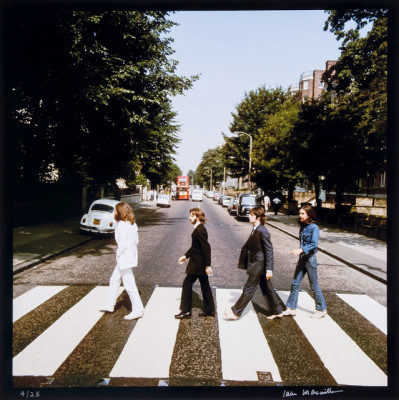 They all wore suits designed by Tommy Nutter, except for Harrison. 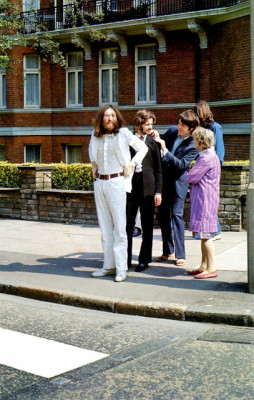 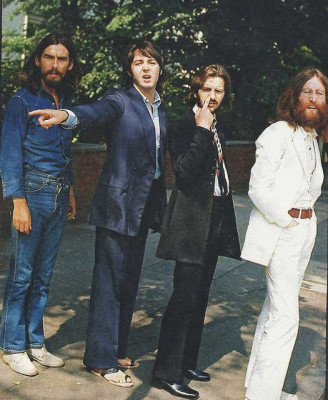 The procession of The Beatles across the zebra crossing, according to conspiracy theorists, represents Paul’s funeral. They think that John Lennon’s white suit symbolized the color of mourning in some Eastern religions while Ringo Starr is donned the more traditional black. What they neglect to point out, however, is that George Harrison is wearing denim, the color of mourning in Canada. 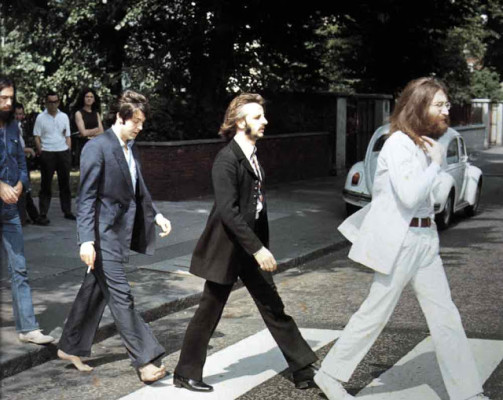 Paul McCartney wore sandals for the first two shots, but afterwards took them off and walked barefoot. This action became one of the ‘clues’ in the Paul Is Dead myth, which began in September 1969. McCartney later explained that he began the shoot wearing sandals but because it was a hot day, he kicked them off. 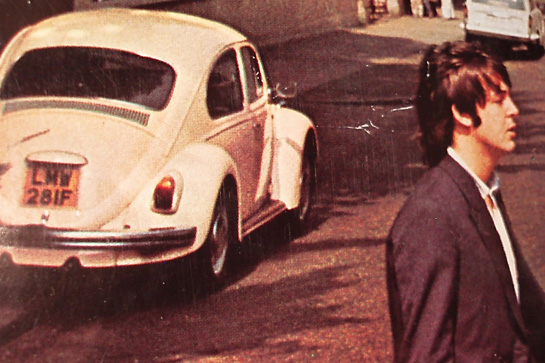 In the background of the cover is a Volkswagen with the possibly cryptic message, “28 IF,” on its license plate. source

There’s a white Volkswagen Beetle in the background with the plate number “LMW 28IF” – 28 being the age conspiracy theorists say Paul would have been IF he hadn’t ‘died’. In fact, Paul was 27 when Abbey Road was released – but fortunately for the theorists, Indian mystics count a person’s age from conception, not birth, in which case Paul would have indeed been 28 at the time. Besides, the band were famously followers of the Indian guru, Maharishi Mahesh Yogi. It has also been suggested that the LMW stands for ‘Linda McCartney Weeps’ – referring to his new wife whom he had married earlier that year.

10. The Beetle in the background of the Abbey Road cover kept getting its plates stolen! 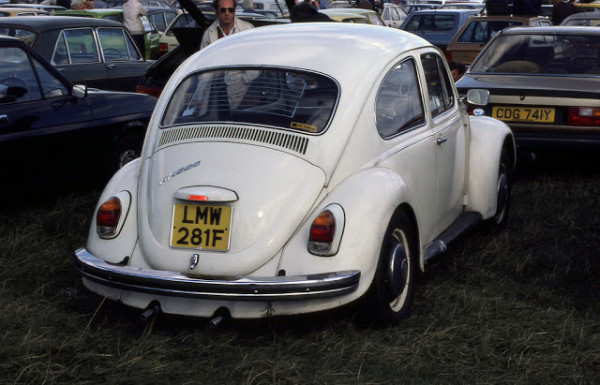 The Volkswagen Beetle at Old Warden on 30th September 1984. Pentakrom/Flickr

After the album was released, the number plate of the Volkswagen Beetle, which belonged to one of the people living in the block of flats across from the recording studio was repeatedly stolen from the car. 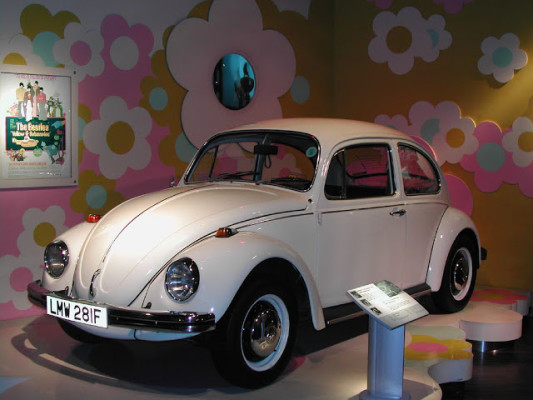 The car was taken in Wolfsburg at the VW Factory in 2003. Ben-Ger/Flickr 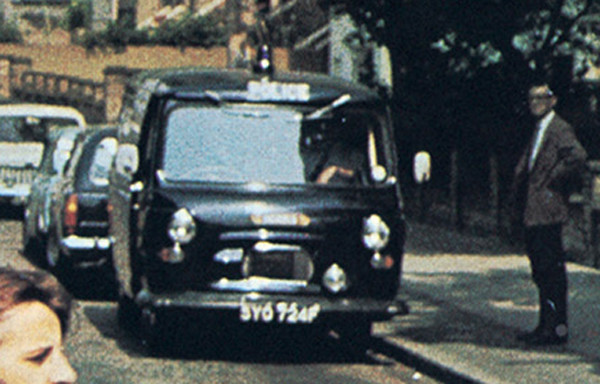 Black Police van in the background

Parked on the side of the road is a black police van, which is said to symbolize authorities who kept silent about Paul’s fatal fender-bender. Say what you will the tenuousness of these symbols—there’s no denying that van is keeping mum. 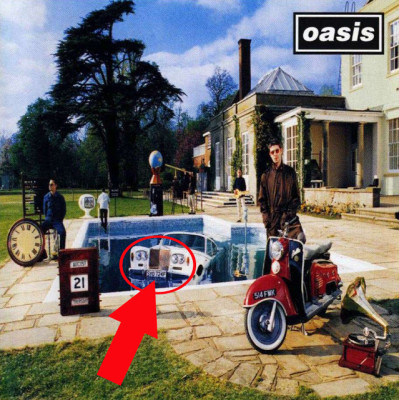 The famous English rock band Oasis has paid tribute to The Beatles, as always. The Rolls Royce on the cover of their 1997 album “Be Here Now“ features the same license plate number “SYD 724F” as the police van on The Beatles’ Abbey Road album.

14. The man pictured in the background 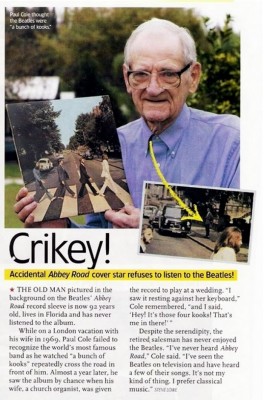 The man standing on the pavement to the right of the picture is an American tourist named Paul Cole. He was accidentally included in the album as he watched the foursome one by one cross the street while on vacation in London and thought they were just four “kooks.” Paul Cole was totally unaware he had been photographed until he saw the album cover months later. He also admitted that he never heard Abbey Road.

You can barely see them, but on the left pavement, further back, stand three decorators, subsequently identified as Alan Flanagan, Steve Millwood and Derek Seagrove. They were doing a decorating job in Abbey Road studios and were coming back after a lunch break when the picture was taken. They hung around just to be nosey and were all captured for posterity on the cover photograph.

Abbey Road is the only original UK Beatles album sleeve to show neither the artist name nor the album title on its front cover, which was Kosh’s idea, despite EMI claiming the record would not sell without this information. He later explained that “we didn’t need to write the band’s name on the cover… They were the most famous band in the world.”

17. The girl in the blue dress

On the night of Paul’s supposed car accident, he was believed to have been driving with a fan named Rita. Theorists say the girl in the dress featured on the back cover was meant to be her, fleeing from the car crash. In fact, after the road-crossing photo was finished, Iain Macmillan set off to find a good “Abbey Road” street marker sign to use for the back cover of the album. He found it at the junction of Alexandra Road and started taking photos of the sign. Much to his chagrin, while he was busy shooting an oblivious woman in a blue dress walked right in front of his viewfinder. While reviewing his shots later that day, however, he decided that the “blue dress” photo was the most interesting of the bunch, and he ended up using it in the final composition. 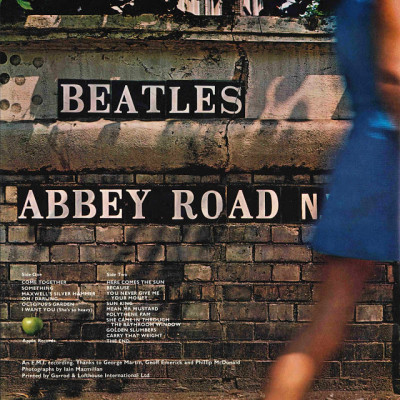 The girl in the blue dress, back side of the album

On the back cover we see the band’s name written in tiles on a wall and there’s a crack running through it. Of all the symbols, this one turned out to be the most meaningful, and sad. Although the release of Abbey Road was followed with ample evidence that Paul was alive and well, what the public didn’t know was that The Beatles had secretly broken up. Abbey Road would be the band’s penultimate studio album, and the group would call it quits only a year later.

20. Four of the original Abbey Road tiles were sold 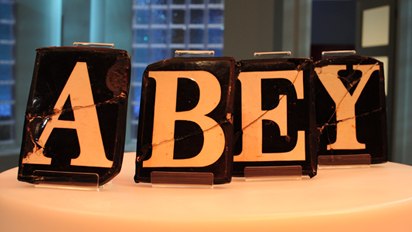 Seller Anne lived in a flat opposite the Abbey Road sign and when she discovered that the wall with the sign on was to be demolished, she rescued what tiles she could and her father glued them back together. Anne managed to rescue just four tiles A, B, E and Y. The tiles were sold to Andrew Lamberty for £7000 in 2012.