In baseball, the dead-ball era was the period between around 1900 (though some date it to the beginning of baseball) and the emergence of Babe Ruth as a power hitter in 1919. That year, Ruth hit a then-league record 29 home runs, a spectacular feat at that time.

This era was characterized by low-scoring games and a lack of home runs. The lowest league run average in history was in 1908, when teams averaged only 3.4 runs scored per game. 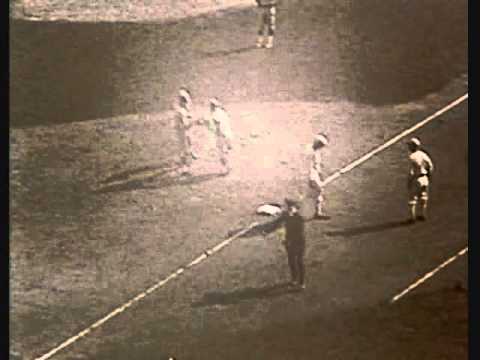 During the dead-ball era, baseball was much more of a strategy-driven game, using a style of play now known as small ball or inside baseball. It relied much more on stolen bases and hit-and-run types of plays than on home runs.These strategies emphasized speed, perhaps by necessity.

Teams played in spacious ball parks that limited hitting for power, and, compared to modern baseballs, the ball used then was “dead” both by design and from overuse. Low-power hits like the Baltimore Chop, developed in the 1890s by the Baltimore Orioles, were used to get on base. Once on base, a runner would often steal or be bunted over to second base and move to third base or score on a hit-and-run play. In no other era have teams stolen as many bases as in the dead-ball era.

Pittsburgh Pirates outfielder Owen “Chief” Wilson set a record of 36 triples in 1912, a little-known record that is likely one of baseball’s unbreakable records, as is that of the 309 career triples of Sam Crawford set during this time.

In 1913, however, pitchers started to regain control, helped by a serendipitous invention by minor league pitcher Russ Ford. Ford accidentally scuffed a baseball against a concrete wall, and after he threw it, noticed the pitch quickly dived as it reached the batter. The emery pitch was born. Soon pitchers not only had the dominating spitball; they had another pitch in their arsenal to control the batter, aided by the fact that the same ball was used throughout the game and almost never replaced. As play continued, the ball became increasingly scuffed. This made it harder to hit as it moved more during the pitch, and more difficult to see as it became dirtier. By 1914 run scoring was essentially back to the pre-1911 years and remained so until 1919.