Workers Leaving The Lumière Factory in Lyon also known as Employees Leaving the Lumière Factory and Exiting the Factory, is an 1895 French short black-and-white silent documentary film directed and produced by Louis Lumière. It is often referred to as the first real motion picture ever made, although Louis Le Prince’s 1888Roundhay Garden Scene pre-dated it by seven years. 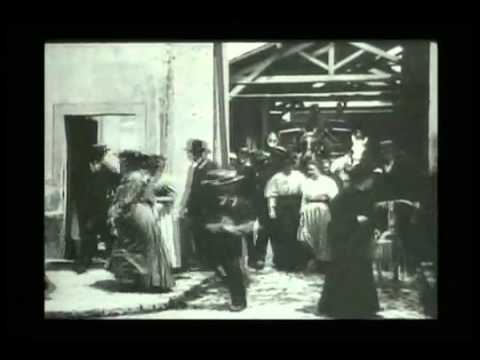 he film consists of a single scene in which workers leave the Lumière factory. The workers are mostly female who exit the large building 25 Rue St. Victor, Montplaisir on the outskirts of Lyon, France, as if they had just finished a day’s work.

Three separate versions of this film exist. There are a number of differences between these, for example the clothing style changes demonstrating the different seasons in which they were filmed. They are often referred to as the “one horse,” “two horses,” and “no horse” versions, in reference to a horse-drawn carriage that appears in the first two versions (pulled by one horse in the original and two horses in the first remake).

This 46-second movie was filmed in Lyon, France, by Louis Lumière. It was filmed by means of the Cinématographe, an all-in-one camera, which also serves as a film projector and developer. This film was shown on 28 December 1895 at the Grand Café on the Boulevard des Capucines in Paris, along with nine other short movies.

As with all early Lumière movies, this film was made in 35 mm format with an aspect ratio of 1.33:1, and at a speed of 16 frames per second. At that rate, the 17 meters of film length provided a duration of 46 seconds, holding a total of 800 frames.

Given its age, this short film is available to freely download from the Internet. It has also featured in a number of film collections including Landmarks of Early Film volume 1, The Movies Begin – A Treasury of Early Cinema, 1894–1913 and The Lumière Brothers’ First Films.