The other Great Wall of China, in Nanjing, is the world’s longest circular city wall, completed in 1386

While the Great Wall of China pretty much defines astonishing architectural feat and historical tourist destination, it is not the only great wall in China. The other great wall of China lies in Nanjing, northwest of Shanghai on the Yangtze River. It too has a remarkable place in the history book: It is the world’s longest circular city wall.

The Nanjing City Wall was built between 1366 and 1386 to protect the founding capital of the Ming Dynasty. Some 200,000 workers labored to construct the fortification, moving 9 million cubic yards of earth in the process. The first Emperor of the Ming Dynasty, Zhu Yuanzhang, ordered 118 counties of 20 states in five provinces to make bricks, according to the Travel China Guide website. Each brick weighs about 6 pounds. 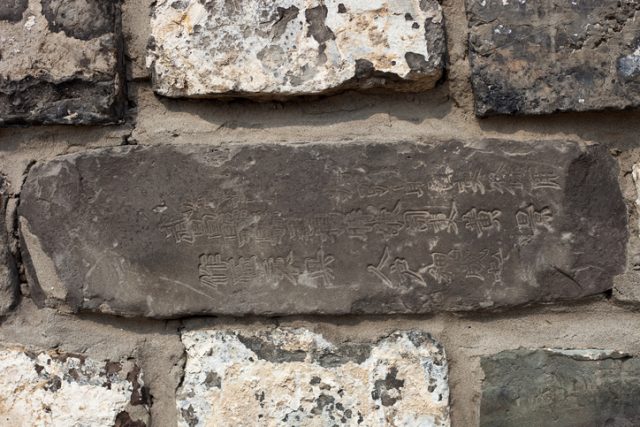 Because the bricks are marked with Chinese characters recording their origin, the official in charge of their making, and the individual maker, those of the Nanjing City Wall constitute the biggest set of historical construction records. Up to 350 million bricks were used to build the wall. The joints were poured with a strong, coagulated mix of lime, rice water, and tung oil. Its height ranges between 45 and 65 feet, and its walls are about 45 feet wide. Atop the walls are 13,616 crenelations for defensive measures. 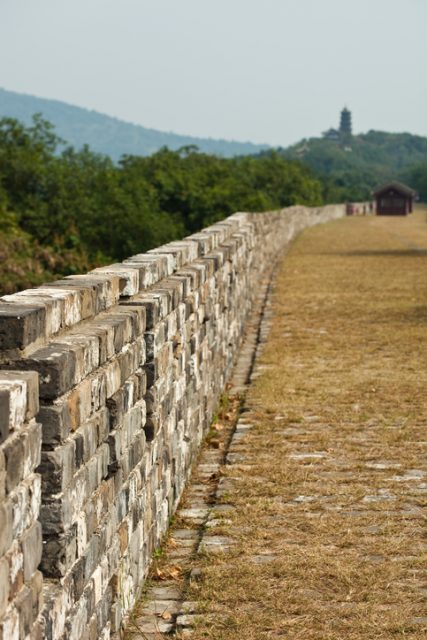 The world’s longest circular city wall encloses the 21 square miles of inner Nanjing City. Nanjing proper, the capital of Jiangsu province, covers 2,500 square miles, and the Greater Nanjing Metropolitan area covers 23,000 square miles, with a population of 30 million in the 2016 census. The Nanjing City Wall originally had a perimeter of about 22 miles; 13 miles of the wall still stand today. 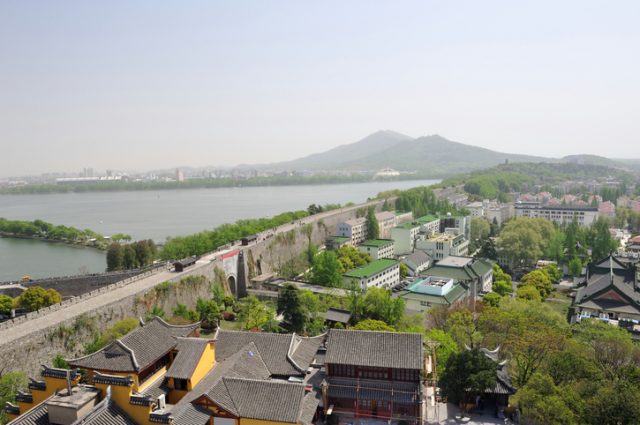 “Bird-eye view of Ming City Wall with Xuanwu Lake on left and Purple Gold Mountain in the background, Nanjing, China”

Travel Guide China points out that the development of the City Wall intentionally integrated traditional Chinese thinking about city development with the natural backdrop of mountains and rivers.

The most ancient city wall still standing in China, it is a testament to ancient China’s planning of urban defense facilities, craftsmanship of city wall construction, and development of feudal capitals. 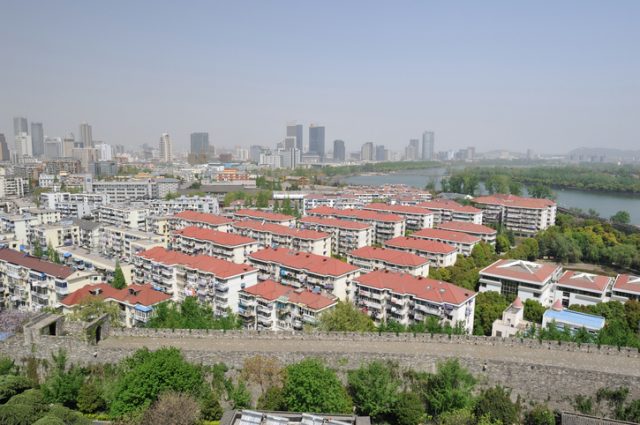 When the City Wall was first completed in 1386, Zhonghua Gate, or the Gate of China, served as the southern gate, just north of the Qinhuai River. The ruins of three grand castles lie today within the gate.

On the eastern side of the wall, the area surrounding the East Water Checkpoint, or Dongshui Guan, has been developed into a large public park. 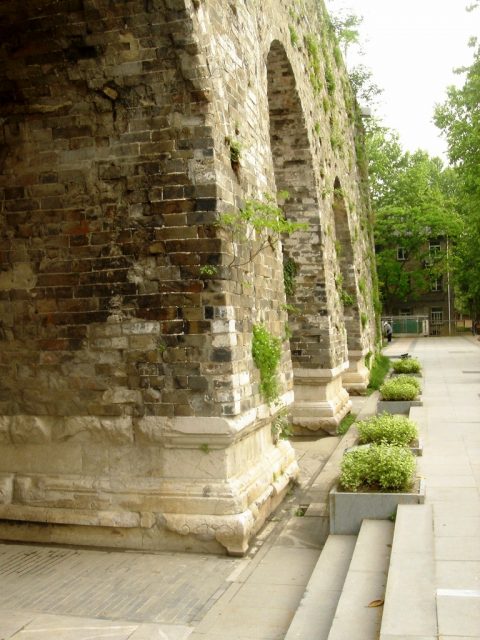 Wu Gate, at the terminus of a carriage route once exclusive to Ming emperors, led into the Imperial Palace just north of Dongshui Guan. Today, the defunct palace grounds have been transformed into an open green space that includes a restored gate, an original inner moat, ruins of the Hall of Praying to Heaven, and a stone wall with intricate Ming-era carvings of fabled animals. The well-populated park sees lively action from sword-dance performers and tai chi practitioners. 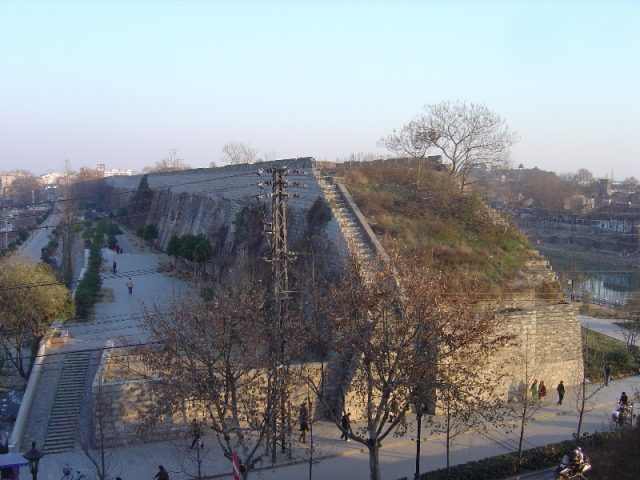 Continuing further north counter-clockwise along the wall, Taicheng Gate offers views on one side of Xuanwu Lake, a 1.4-square-mile refuge in the heart of the city, and on the other side of the ancient Cock-crow Temple and gleaming skyscraper Zifeng Tower—modern and ancient China in one picture frame. 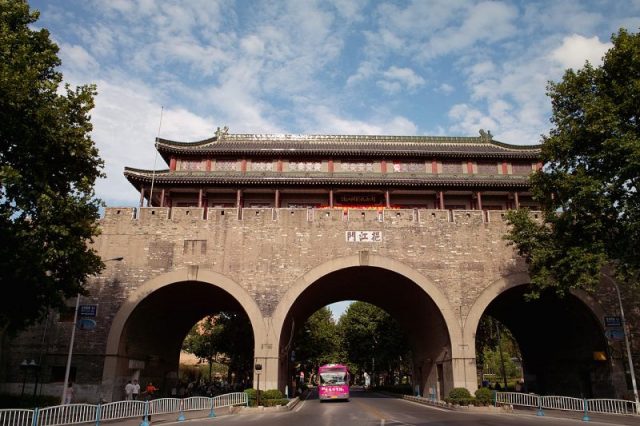 At the northernmost point of the wall stands the most complete and impressive gate, Heping, or Peace Gate. Located just to the north of Xuanwu Lake, the fortress, also known as Shence Gate, was a guarded military zone inaccessible to the public for more than seven decades. It is the only gate to have a watchtower.

Related story from us: The Kumbhalgarh Fort of India: A 15th-century fort with the second largest wall in the world

According to the UNESCO World Heritage website, the City Wall of Nanjing has four outstanding characteristics: that it had the biggest scale and longest use; the most perfect planning; the largest group of brick inscriptions; and the only city wall of an ancient Chinese capital still standing today.

« Human footprints dated to roughly 85,000 years ago revealed in Saudi Arabia
Ayrton Senna’s excuse for hitting a brick wall during the Dallas Grand Prix in 1984 was that “the wall must have moved,” and he was right »