There is a tiny island called Socotra in the Arabian Sea in the Middle East where it seems time stopped a long, long time ago and, by the looks of it, it was either painted by Dali and somehow brought to life, or it was specifically designed by a film production company to serve as a desolate backdrop scenery to a science fiction movie that takes place billions of light years away from Earth.

Yet there it is, on our planet, set right between the Horn of Africa to the east and the Arabian Peninsula to the west, and there isn’t anything like it. Rarely is there a place that makes people feel as if they are transported to another time, let alone a place that makes them shiver at the thought that there might be dinosaurs lurking around. Labeled the “the most alien place on Earth,” many myths and legends have sprung up to explain its otherworldly scenery and alien-like bio-diverse nature. 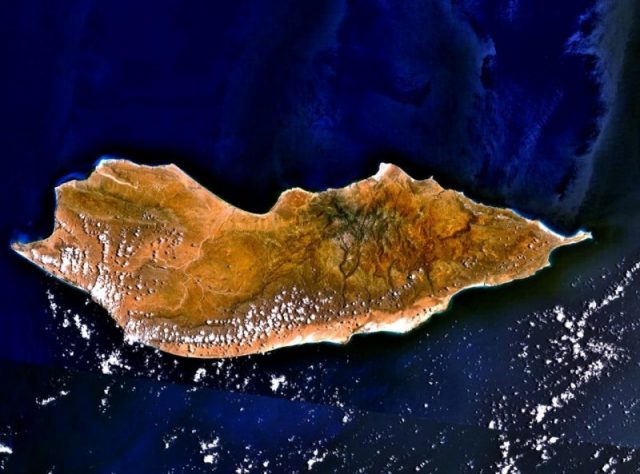 Amid crimson-red beaches and crystal-white sand dunes, 800 hundred different species, some of them existing for more than 20 million years, can be found on the scorched rocky surface of this island now referred to as Socotra, meaning “the Island of Bliss” in ancient Sanskrit.

They thrive in an arid environment under extreme conditions and at least one-third of them can be found here and nowhere else on the planet. A few of them, in particular, give that surreal look to the island. There are extremely rare succulents, the Dorstenia gigas, oftentimes referred to as the Socotran fig, an elephant’s leg looking miniature baobab tree, as well as its look-alike cousin Adenium Obesum (the Desert Rose) that has gorgeous pink flowers growing out of it on top. 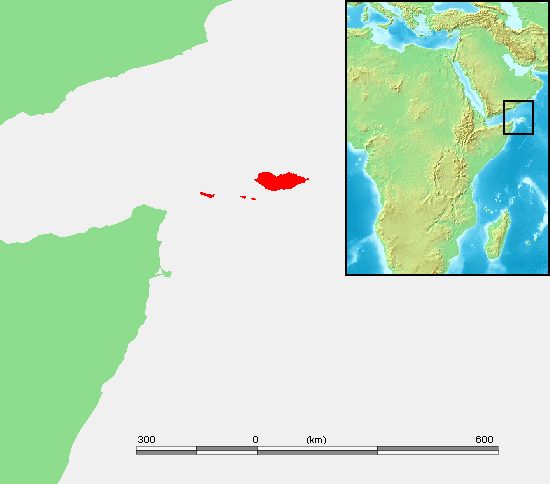 But there is one plant, the Dragon Blood Tree of Socotra, that has spurred a number of legends and myths into existence. This is what this place is renowned for.

According to one of many legends, the Creator made a beautiful new world out of nothing in the middle of a big, deep blue ocean and made fascinating forms of life to exist in it. But the most bizarre of them all was the Dragon. It was a strange and powerful creature with an elegant body. The legend says its top was covered in scale-like skin and rows of small fan-like growths that run down its spine. Combined with restless azure eyes delicately placed within a long, thorny skull, this gave the creature a very ominous appearance.

But in contrast to its frightening exterior, this creature wasn’t dangerous. It was calm and graceful by nature, or so seemed to be the case. It would do nothing but lay on the rocks on top of this new world, taking in the warmth through its scales from the summer sun and doze serenely for hours and hours, day after day. It was how the dragon felt happy, resting just so, gazing far out at the horizon. The Creator made this peaceful but powerful creature the king of everything that lived in his world; its designated protector while he was gone.

But then, when the Creator returned after so many years of absence, he didn’t see the magnificent world he left behind, but a world ravaged and burned to the ground. He found not one of the other beautiful creatures he had created not so long ago. Only the dragon, still perched on top of the highest mountain, resting as per usual, and nothing but a dead marshland around. God was furious. The dragon must have eaten them all and destroyed his paradise. So he turned the dragon into a tree and made it suffer. Whenever the bark of this tree is cut, the dragon bleeds in pain. 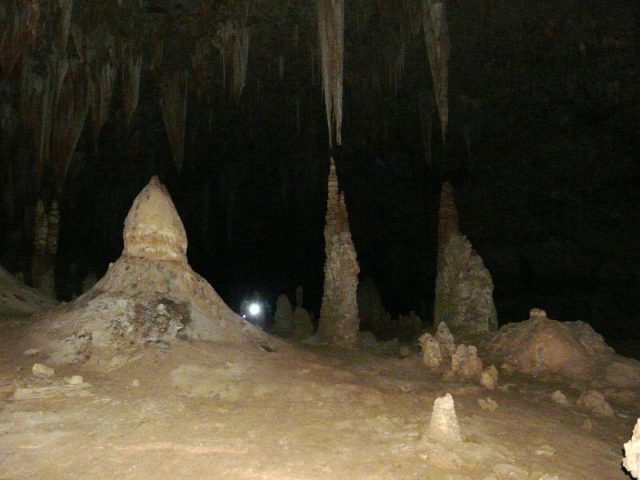 Halah Cave (كهف حالة) in the east of the island is several hundred metres deep, with total darkness. Stalagmites and stalactites show how high it can reach compared to the 1.7 metres (5.6 ft) man with the torch.

This strange tree, according to legend, is the Dragon Blood Tree, only it doesn’t bleed really and it’s not Dragon’s blood of course — although we must admit it is a pretty fascinating story and it sure looks like it does.

The strange mushroom-like umbrella tree that looks like an inverted root system with a densely packed green leaf cover sprouting on top is Dracaena Cinnabari, a slow-growing evergreen flowering tree that in actuality releases a thick red sap, that colloquially grew to be referred to as dragon’s blood.

The plant can grow up to 15 to 20 feet in height. It was first found described in 1835 by Lieutenant Wellsted who became intrigued by its unusual appearance during a survey organized and conducted by the British East India Company, the largest trading company in the world at the time. He called it Pterocarpus Draco. 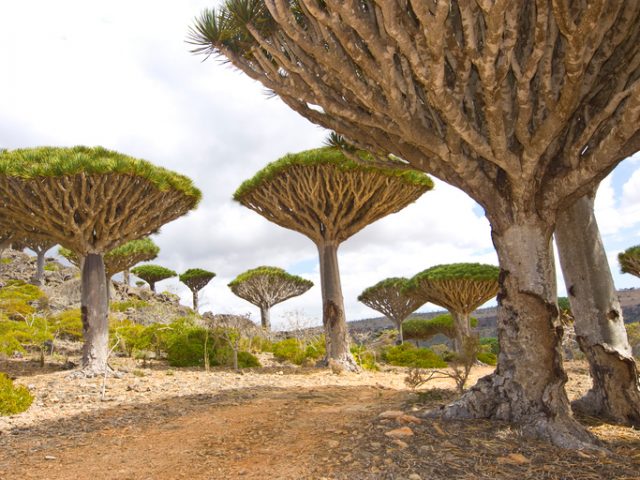 The natives used its red sap, the dragon’s blood, as a wonder drug, a cure for all ailments. They have used it to cure everything from diarrhea, fevers, viruses, and dysentery all the way to treat ulcers, lesions, and various skin disorders and rashes, like eczema. They’ve been using it as such for centuries.

As a matter of fact, a stone handcrafted tool dating back to 1.5 million years BC found in the vicinity of Hadibo, today’s largest human settlement on Socotra, suggests that the island could be one of mankind’s birth cradles, and locals from the island believe in a legend that in the past, around 1000 years BC, it was of great importance to the ancient Egyptians.

According to them, it was mainly because the Phoenicians held a firm belief that Socotra was sacred, for it was home to the legendary Phoenix bird. Aside from that, it was abundant in some unique ingredients that they craved so much — frankincense, myrrh, and aloe, to name a few. 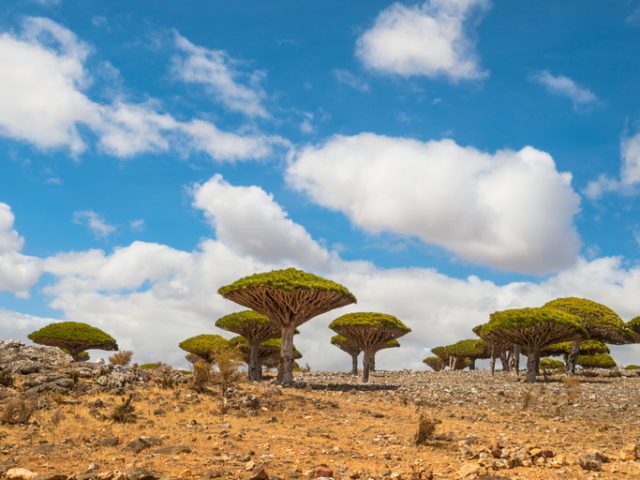 Dragon’s blood was among these healing mystic potions as well. It was a real paradise for Druidic herbalists, and the island soon enough grew to be a go-to place for shamans and spiritual healers. Even some historical linguists state that translated from ancient Arabic, the word Socotra means Suq (market) and Qutra (dragon blood.) 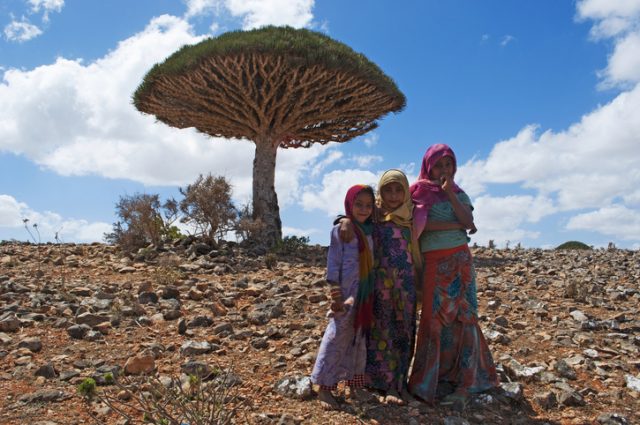 Socotra, Yemen – February, 2, 2013: a Dragon Blood tree and the little girls from the island, sellers of the red sap produced by the endemic tree in the forest of Shibham, the protected area of the Dixam Plateau in the center part of the island of Socotra, Unesco world heritage site since 2008 for its biodiversity

However, everything about these times comes from unsupported claims and not so reliable sources. Socotrans never introduced an alphabet to their language and never really bothered with writing their history down. 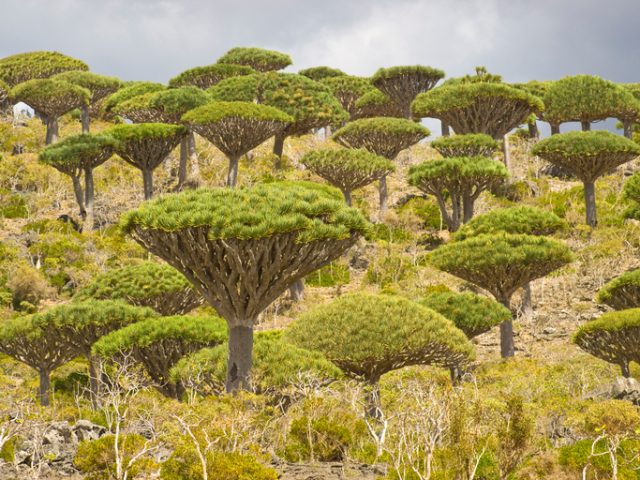 Legends, fables, and old wives’ tales, along with the occasional citing in other nation’s chronicles, is the backbone upon which the history of this island is based. However, inscriptions in various ancient languages found inside the caves that lie inside the long limestone plateau of the island hint at a rich cultural life on what was probably a place highly valued by different civilizations through different times. 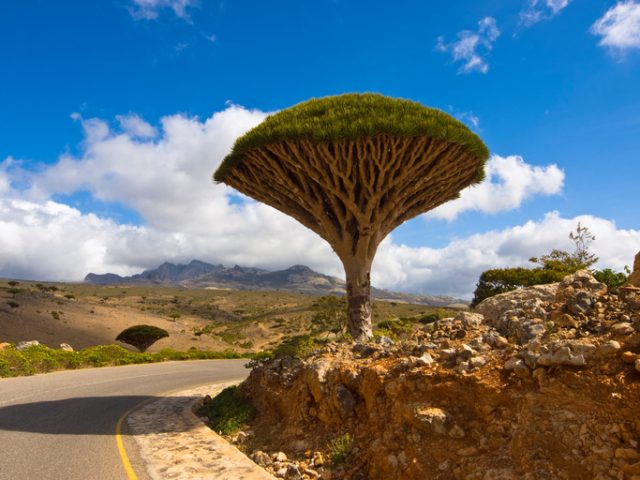 The first written evidence of this though comes from around 330 BC, when the island and its importance is first mentioned during Alexander the Great’s conquest. Then it was used as a military base from where he would launch his army to India.

His conquest was unsuccessful, but the island had myrrh and dragon blood for the wounded and for that grew to be an inseparable part of Hellenic culture, mentioned over and over again for centuries. For instance, Diodorus of Sicily wrote that, in the 1st century BC, Socotra supplied the whole world with myrrh and that nice smell in and around the temples and bathhouses of ancient Greece, Egypt, and later the Romans, was due to Socotran frankincense. 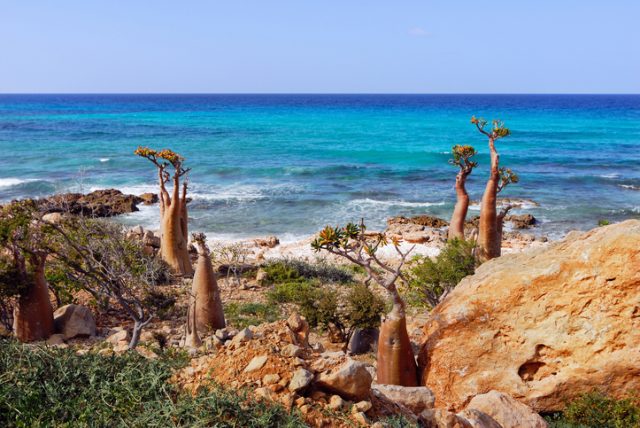 However, with a dramatic shift in trends and culture, the interest in these substances waned, and just like that the importance of an island that had them waned with it. Socotra came to be overlooked by merchant ships on their trade routes that passed through the Indian Ocean and Arabian Sea.

Over the next centuries, it served either as a pit stop and a refreshment stall for sailors or as a base for military conquests. In the mid-20th century, right after World War II, it became part of the People’s Democratic Republic of Yemen, and under communism was closed to the rest of the world, up until the late 1990s. 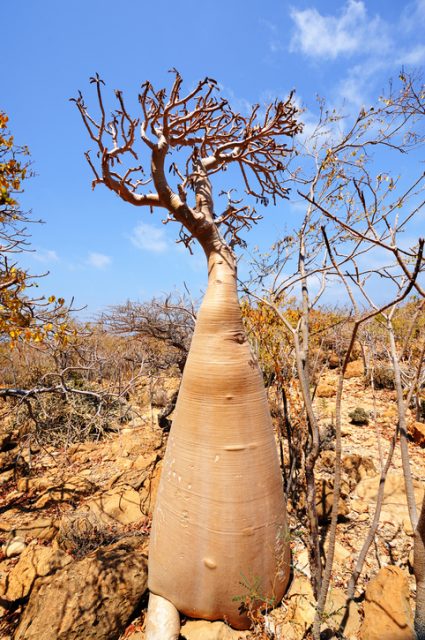 More than 40,000 people live on this island. Very few outsiders visit anymore or even know it exists. It’s been cut off from the outside world and geographically from Africa’s mainland for millions of years. These people have been here for as long as they can remember. They speak their own language and have their own traditions. They still use dragon’s blood as an all-purpose magical cure. Though it is yet to be proved if it is effective.

Related story from us: The other Great Wall of China, in Nanjing, is the world’s longest circular city wall, completed in 1386

Nonetheless, Socotra is considered to be the most bio-diverse habitat in the Arabian sea, if not the whole Indian Ocean. UNESCO named the island a World Heritage Site and designated the area as a Man and Biosphere Reserve. There are no hotels, and paved roads were built only very recently. There are trees that bleed, however — and just maybe they bleed because they don’t want to be cut down.

« Born into poverty, Sheilah Graham reinvented herself many times, becoming a glamorous gossip columnist and the lover of F. Scott Fitzgerald
While archaeologist Zhao Kangmin worked on putting together the Terracotta Army, he tried to keep it secret from a government that hated history »