While archaeologist Zhao Kangmin worked on putting together the Terracotta Army, he tried to keep it secret from a government that hated history

On May 16th, 2018, archaeologist Zhao Kangmin passed away at the age of 81, according to news reports. He was best known for his accomplishment of discovering and piecing together fragments of a terracotta warrior into a full statue.

The Terracotta Army is a large band of full-sized clay soldiers that were created for the purpose of being buried with the first emperor of China, Qin Shi Huang, in the early 3rd century. During his rule, the emperor is credited with building an early version of the Great Wall. 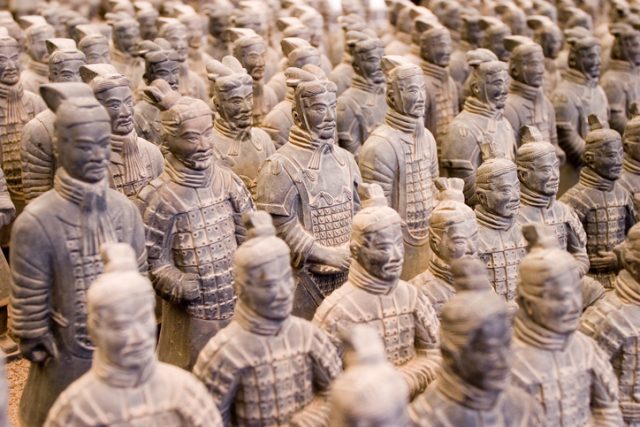 Small reconstructions of the Terracotta army in Xi’an China.

The belief was that this army of terracotta warriors would protect and serve the emperor in the afterlife. The emperor’s tomb itself was a massive complex, filled with more than just warriors. The mausoleum contained artifacts, treasure, clay horses, chariots, and even weapons, all of which were guarded by the 6,000 terracotta soldiers who stood around their emperor’s tomb. 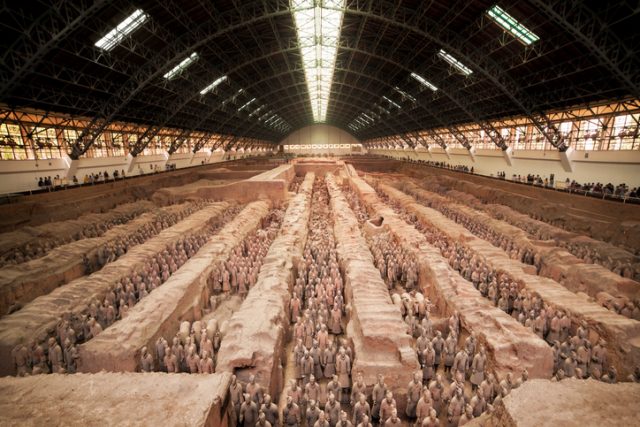 After the mausoleum had been constructed, the workers and craftsmen who had built the tomb, with its complex secrets, were reportedly killed, as a way to prevent others from learning of what rested within the mausoleum. After the emperor was buried, it would seem that the world moved on for thousands of years. 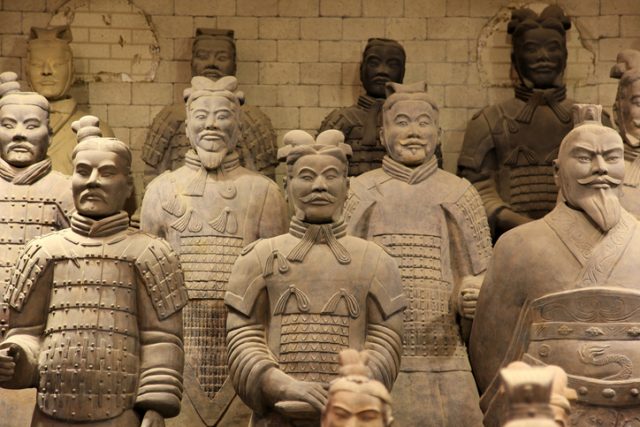 The location of the mausoleum was forgotten by history until 1974, when a few farmers in Lintong District, Xi’an, stumbled across a head buried in the earth. 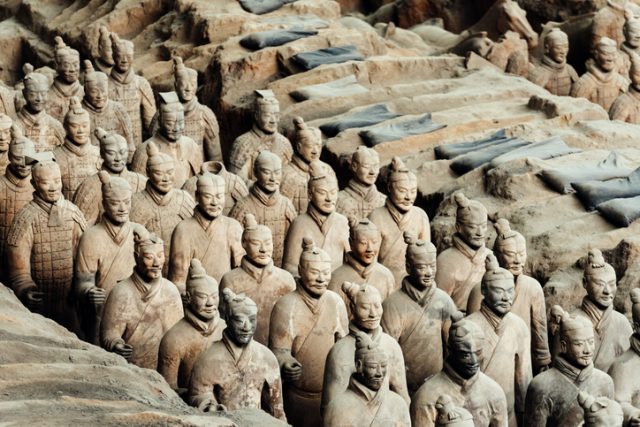 They had intended to dig wells but ended up uncovering various fragments of terracotta warriors, inadvertently discovering the site of the mausoleum. While the farmers began to collect the fragments with the hopes of selling them, a local cultural official by the name of Zhao Kangmin caught word about this discovery.

Mysterious ancient societies that historians know almost nothing about.

He was quick to make his way to the site and purchased all of the artifacts that he could from the farmers. After that, he brought all that he collected to a local museum and set about the task of recreating an entire terracotta warrior. 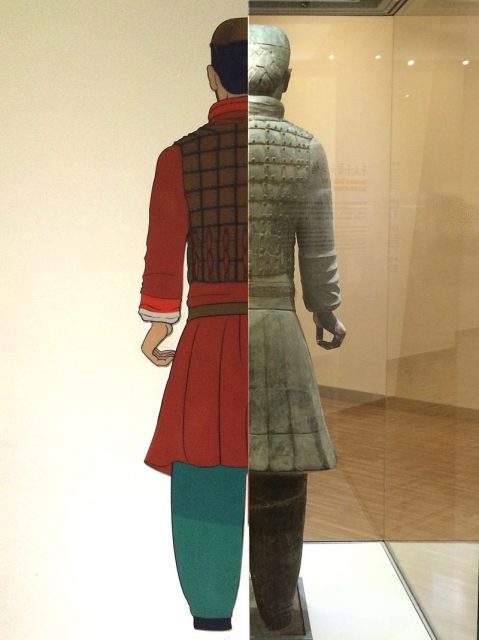 Original coloring on the warriors. Photo by: Charlie
CC BY-SA 4.0

Zhao kept his reconstruction effort under wraps, out of fear of the discovery and suffering under the wrath of the Chinese government. Underneath Chairman Mao’s brutal regime, the past was looked at as something that was holding the Chinese back from achieving true communism. Through a time period known as the Cultural Revolution, the Mao regime destroyed, crushed, and purged historical artifacts because tradition was seen as old ways of thinking that needed to be destroyed. 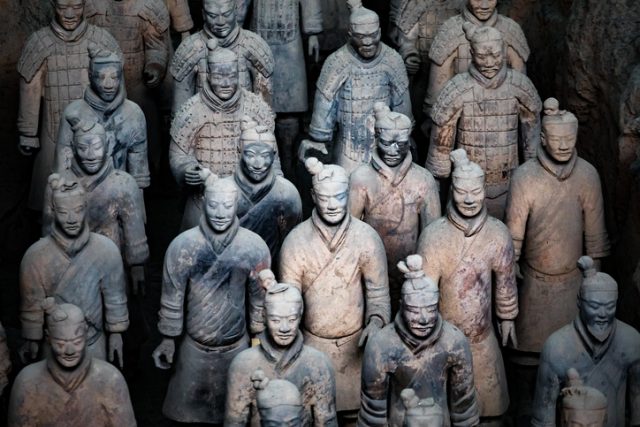 The Cultural Revolution, which set China back significantly in terms of economy, arts, and scientific progress, lasted from 1966 to 1976. When the Terracotta Army was discovered, the Revolution itself was beginning to wind down, yet Zhao was not about to share his discovery with the world. He decided it would be better to hide the secret for the time being, and not risk the government showing up and destroying the artifacts that had been found. 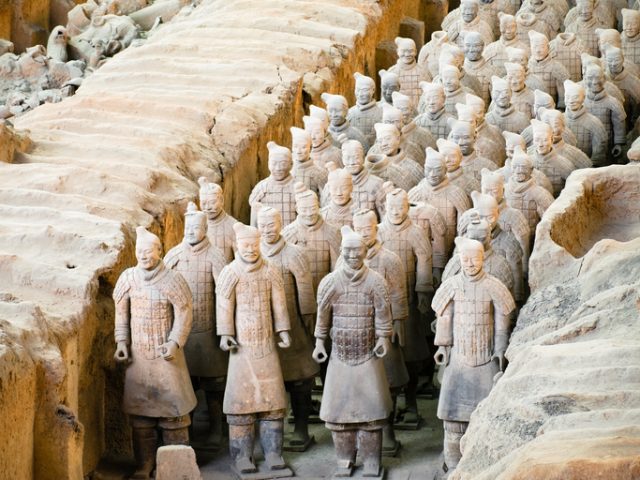 Army of the Terracotta Warriors near Xian in China

However, despite Zhao’s best efforts to hide the information, news leaked about the discovery and the government, in a surprising change of policy, actually ordered a formal excavation of the site where the warriors had been found. Thousands of warriors would be discovered throughout the course of this excavation process. 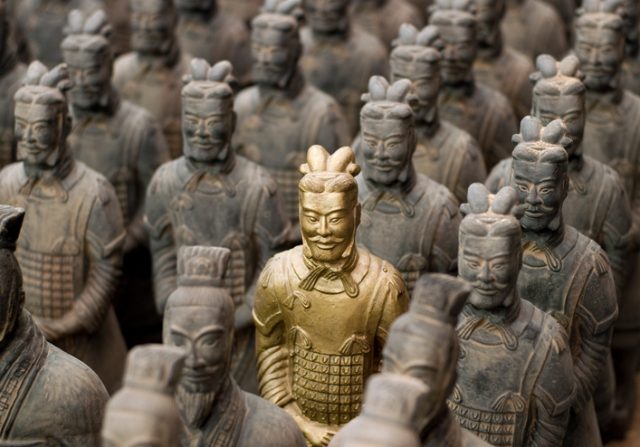 One gold painted replica Terracotta Warrior among many unpainted examples near Xian in Shaanxi province, China.

The Cultural Revolution itself ended with the death of Chairman Mao in 1976, bringing an end to the mass destruction of historical artifacts. The Mausoleum of the First Qin Emperor and the Terracotta Warriors would be listed as World Heritage Sites by the United Nations.

Related story from us: Documents reveal that China’s first emperor, obsessed with immortality, ordered a search of the whole country for an elixir giving eternal life

Zhao Kangmin continued his work as an archaeologist, but his discovery would remain his crowning achievement. While he might not have been the first person to see the artifacts of the Terracotta Warriors, he was the first to figure out what they were and that is what true discovery is.

« The Lost World of Socotra – One of the Most Alien-Looking Places on Earth
Two Popes were too many: How the Papal Schism of medieval era created confusion for years and weakened the church »