The Secret and Dangerous Love Affair Between Kim Novak and Sammy Davis Jr.

It was only 53 years ago that the Supreme Court ruled in favor of interracial marriage, which, in the grand scheme of time, isn’t that long ago. Prior to 1967, it was considered career suicide for a white actor to date anyone outside of his or her race.

That threat didn’t stop Hollywood’s top starlet, Kim Novak, from in 1957 beginning a sizzling secretive affair with “the greatest living entertainer in the world,” Sammy Davis Jr. At least, it didn’t stop her until the Mob became involved and lives were put at risk. 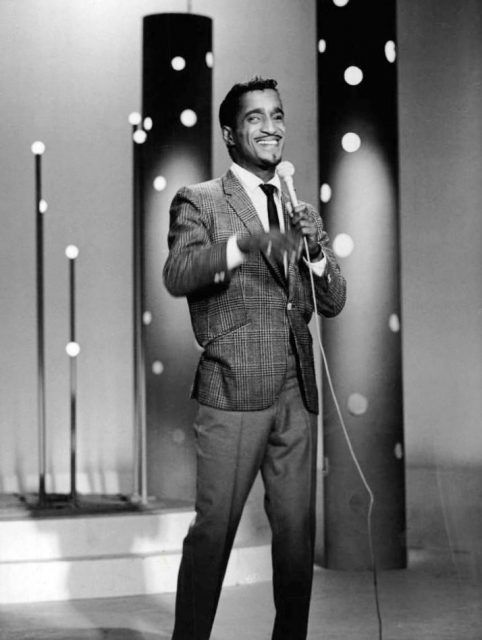 In the fall of 1957, Kim Novak had just finished filming Alfred Hitchcock’s Vertigo when she met up with friends at Chicago’s then-hottest nightclub, Chez Paree.

As she sat at the table near the stage, Sammy Davis Jr., singing on stage, focused his attention on her. When the show was over, Davis confided to his friends Janet Leigh and Tony Curtis that he wished to meet Novak.

Curtis told Davis that he would take care of it, telling him to attend an after-party Curtis was hosting at his home. Curtis then approached her and invited her over. 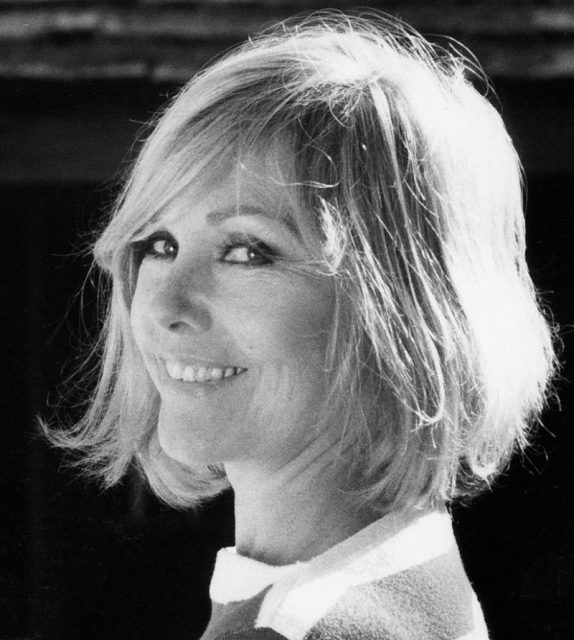 At the party, Davis and Novak were inseparable, spending the entire evening together. It was electric. However, they weren’t the only ones to notice the intense connection. It’s believed that a fellow guest at Curtis’ party called a popular gossip column to inform them of Novak’s and Davis’s chemistry.

The next day in a small section of the gossip column it appeared: “Which top female (K.N) is seriously dating which big-name entertainer (S.D)?” This news spread as gossip usually does, and the night Novak and Davis were seen together at the party would be the last time–that is, by the public. 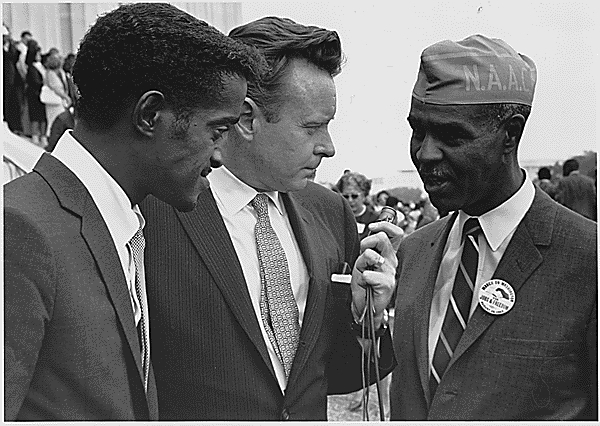 Worried about the impact of the rumor, Davis phoned Novak to apologize for any stress or professional retaliation their brief meeting caused her. Novak didn’t mind; in fact, in Davis’ autobiography, Sammy, she responded to him by saying, “The studio doesn’t own me!” and asked him to come over for dinner.

The small bit of gossip really struck a chord with the notoriously loathed Columbia Pictures Studio boss Harry Cohn. Cohn, who felt like he invested enormous time and money into Novak’s career, took complete control over her, or tried to.

Novak at the time was Hollywood’s Number 1 draw at the box office, one of the hottest female actresses, thanks to Cohn. Since discovering her and creating the image she became known for, he regarded Novak as his property.

When Cohn caught wind of Novak and Davis’ fling, he immediately forbade her from seeing him, no compromise. By all accounts, anyone working in Hollywood feared Cohn and knew the damage he was capable of causing. 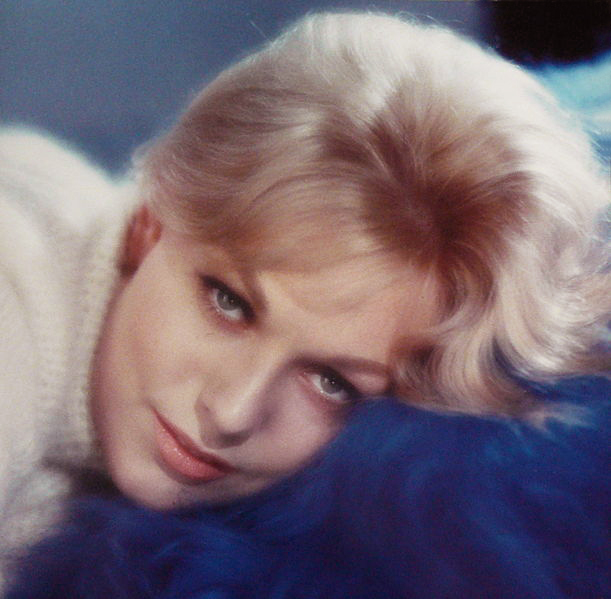 Not only had Cohn admired Italy’s prime minister Benito Mussolini, but he was reportedly known to have close ties with the Chicago Mob–Johnny Roselli to be specific. Roselli, Chicago’s influential mobster who had orchestrated the mafia’s domination within Hollywood and Las Vegas, supposedly even purchased matching ruby stone friendship rings for him and Cohn.

Although Cohn demanded that Novak end any relationship she had with Davis, she didn’t comply. Cohn even arranged bodyguards to wait in front of Novak’s’ home to ensure Davis wouldn’t show up. Through the remainder of 1957, the couple continued to hide their relationship. Arthur Silber Jr., one of Davis’ best friends, was one of the only persons to witness the budding love affair between Novak and Davis. 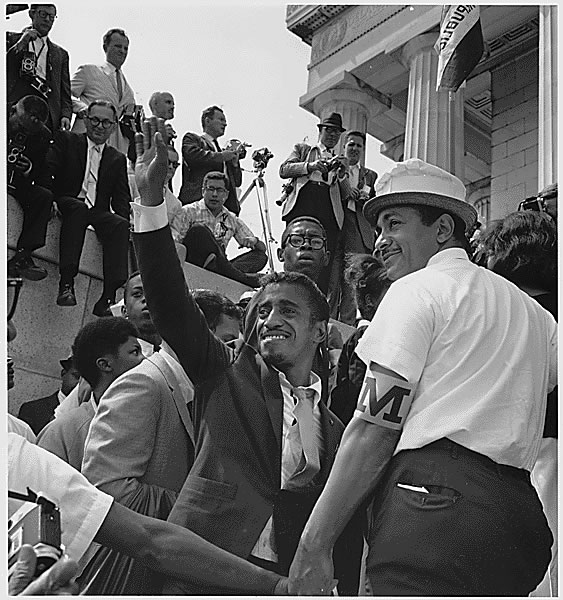 In Silber’s autobiography, Sammy Davis Jr. Me And My Shadow, he recalls the many times he drove Davis and Novak to a private Malibu beach house he rented, just so the couple could have privacy.

According to Silber, when he would chauffeur Davis to the beach house, Davis would cover himself with blankets and hide on the floor of the car, evading any possibility of being exposed. Later that year, in December, Novak flew to Chicago to be with her family for the holidays.

Davis stayed back in Vegas as he was scheduled to perform at the Sands Hotel, which was run by his close friend Frank Sinatra. Even though Sinatra didn’t approve, Davis found a replacement for his scheduled performance and hopped on the next flight to Chicago. 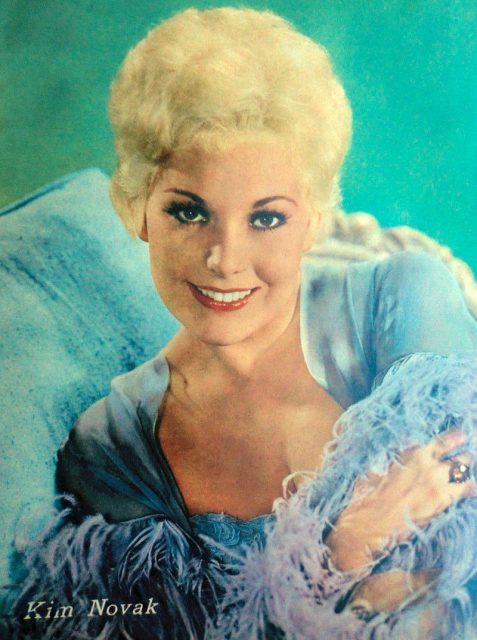 It wasn’t long after Davis arrived in Chicago that gossip hounds were at it again. Chicago Sun-Times journalist Irv Kupcinet received word from a court clerk that the couple filled out a marriage application–and without hesitation, he published the news.

Cohn, at the time, was in New York when he was informed of Davis and Novak’s rumored engagement in the Windy City. To say Cohn was upset would be an understatement.

The new gossip that surfaced about his multi-million-dollar starlet apparently struck such a chord that Cohn suffered a mild heart attack on his flight back to the West Coast. 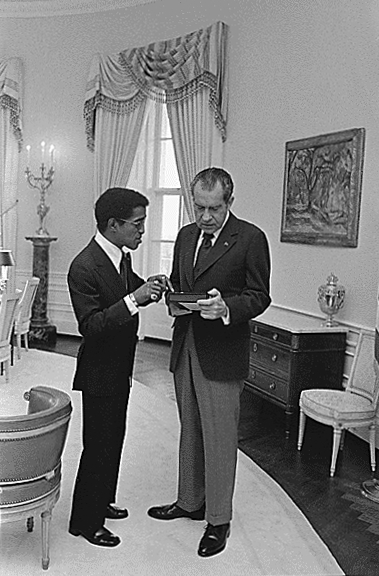 In the Yellow Oval Room of the White House with President Richard Nixon, March 4, 1973

While Novak and Davis were going to great lengths to protect the details of their relationship, Cohn was grasping to destroy it. In January 1958, with a final attempt to eliminate the couple’s affair, Cohn called in a favor from his mobster friends.

Mickey Cohen, boss of the Cohen crime family, contacted Davis’ father, Sammy Davis, Sr., to inform him of the contract hit on his son. Cohen told Davis Sr. that if Davis didn’t marry a black woman within 48 hours, he would take out his other eye and break both of his legs.

Davis Sr. called his son at his Sands Hotel suite and told him about the hit. Terrified and without any way to protect himself from the Mafia, Davis didn’t have any other choice but to find a bride. 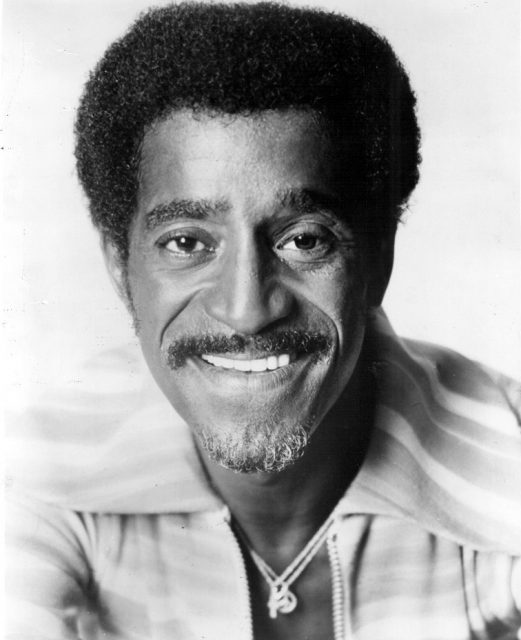 Davis got in touch with a singer who worked at the Silver Slipper club in Vegas, Loray White, whom he had briefly dated in the past. Davis offered White $25,000 to marry him and act as his wife for a year. After the year, they would dissolve their marriage and go their separate ways. White agreed to his proposal, and the contract hit against Davis was dropped.

On January 10, 1958, Davis and White were married in the Emerald Room in the Sands Hotel–only to be divorced six months and $25,000 later. With all the turmoil and threats to both lives and careers, Cohn’s plan to dissolve the duo’s relationship seemed to work. Novak eventually succumbed to Cohn’s demands. With her acting career on the line, she retreated from Davis’ life. 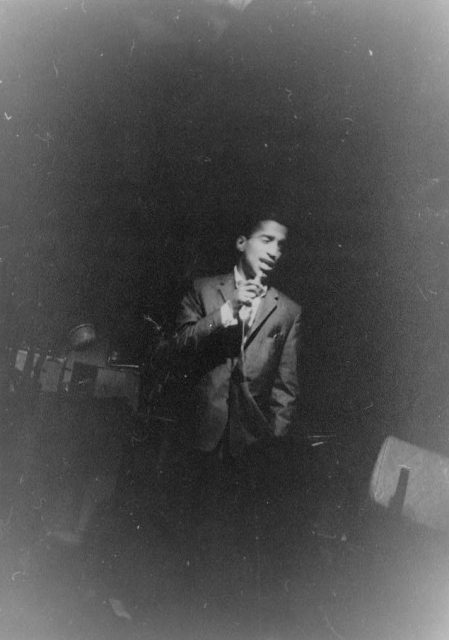 The following month, Cohn suffered another heart attack which ended his life. Following his death, Novak’s once-thriving acting career dissolved. By the early 1960s, Novak retired from Hollywood and pursued a simpler life.

A couple years later and after Davis’ divorce from his fake (but real) marriage, he went on to marry another white actress, May Britt.

The couple wed in 1960, and because of their interracial marriage, endured death threats, ridicule, and career setbacks for the entire duration of their eight-year marriage. Novak and Davis met only a few times after their scandalous affair. In 1979 they danced together at the Academy Awards. 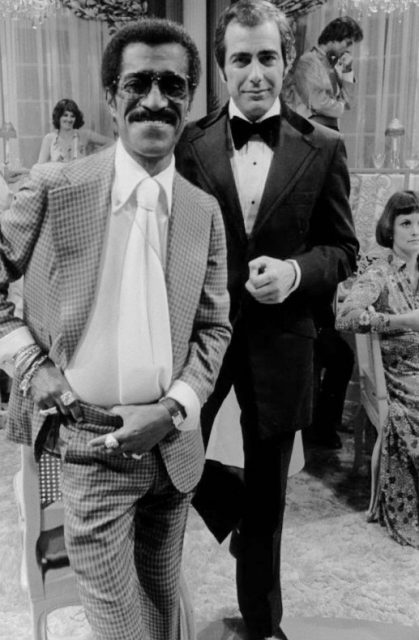 Publicity photo from the television daytime drama Love of Life. Sammy Davis, Jr. is shown with Jerry Lacy in a guest-starring role.

Eleven years after the ban on interracial marriage was knocked down, nobody seemed to mind the two stars embracing each other on the dance floor.

Their final time together took place in 1990 at the Cedars-Sinai Medical Center in Los Angeles. Davis, who was dying from throat cancer, was visited by Novak in his hospital room. Davis died a few weeks later in his home on May 16th. 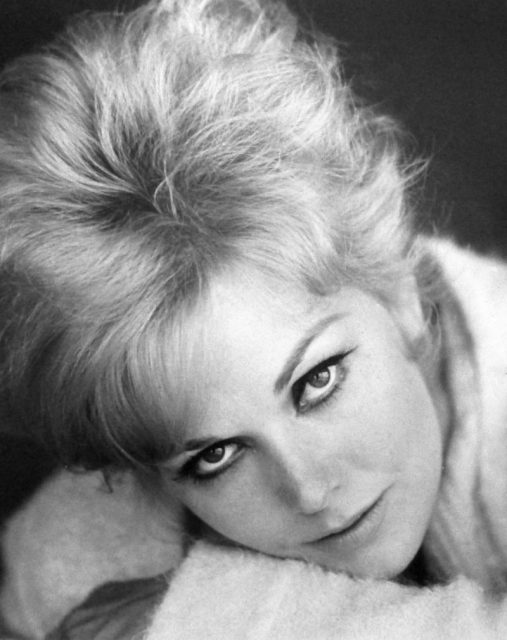 In 2004, during an interview on CNN’s “Larry King Live,” King asked Novak about Harry Cohn forbidding her to see Davis, and Novak replied,  “When someone says you can’t do something, I mean of course you want to do it. But it wasn’t seeing him in a love relationship, but I felt–who is going to say because he’s black you weren’t going to see each other?”

Related story from us: Loving vs. Virginia: The interracial couple that helped eliminate anti-miscegenation laws still on the books in 1967

In the end, Novak reflected on her time with Davis, saying, “I just never saw him as color, I just saw this great sense of humor and tremendous talent and I just felt wonderful just to be around someone that great.”

« This “astronaut” carving on an old Spanish cathedral isn’t what people think it is
22 images cool cowgirls: The ranchers, pioneers & later rodeo stars, who rode the West »