However, the nation lacked sufficient training facilities for pilots and aviators to polish their skills. Which is why, in the preparation process, a naval air base opened in Texas’ Corpus Christi, near the Gulf of Mexico.

The building effort, for what would become the largest base of its type in the world by the end of the war, began in 1940 and was completed just months before the U.S. suffered the attack at Pearl Harbor. 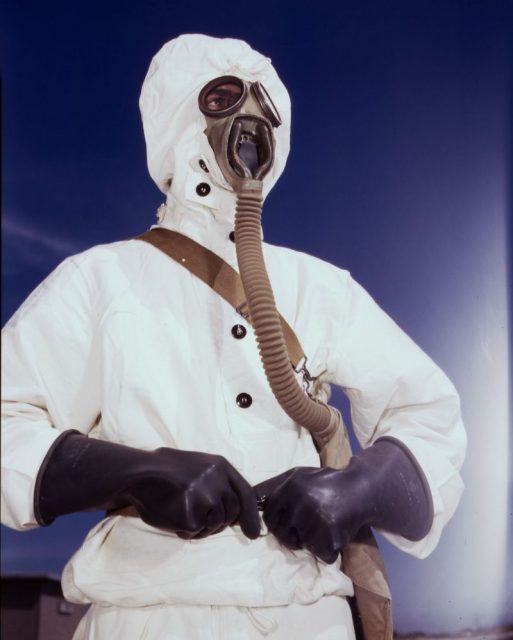 A sailor dressed in brand-new protective clothing with a gas mask to be used in case of a chemical weapon attack. 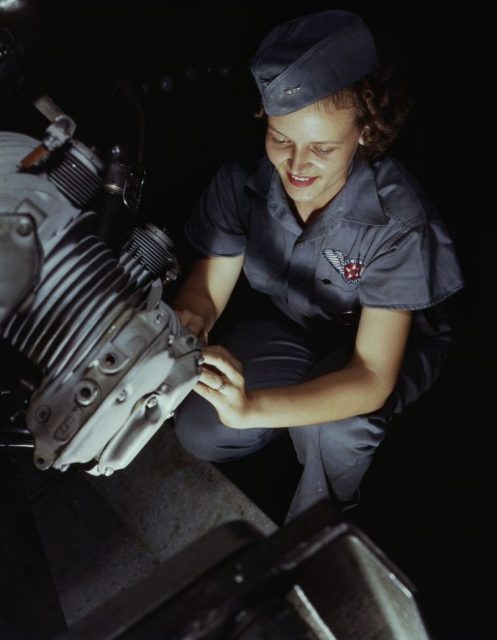 Mechanic Mary Josephine Farley checks a Wright Whirlwind motor at the Assembly and Repairs Department at the naval base. 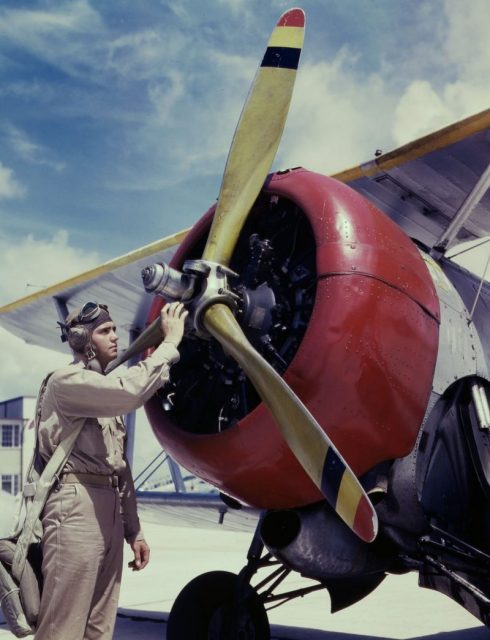 Aviation Cadet Thanas probes the engine of an airplane. 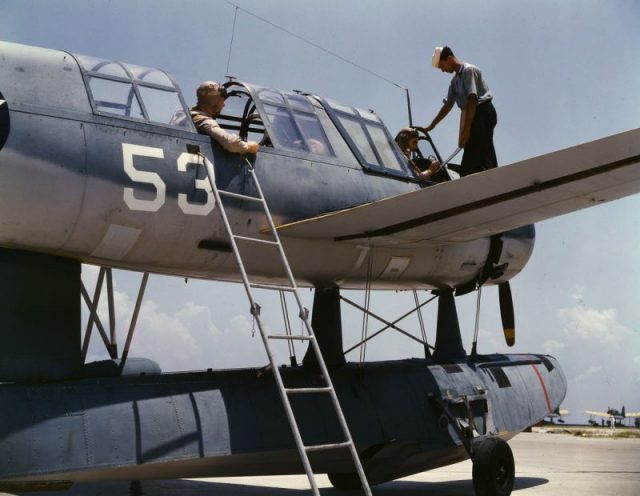 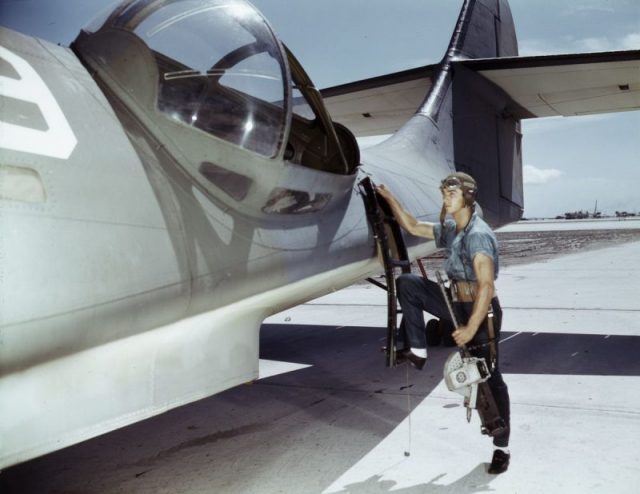 Aviation Ordnance Mate Jesse Rhodes Waller is all set to place a machine gun in one of the Navy’s PBY planes.

The base spanned an astonishing 20,000 acres of land and contained hundreds of barracks, hangars, and warehouses. Thousands of people, both men and women, were employed to run the facilities.

Instructors and supervisors were hired to train 300 new incoming cadets each month. The number of cadets as well as supporting staff only multiplied as the United States actively engaged in the war effort against the Japanese.

Besides its main center, Corpus Christi used six additional locations in the area.

In the summer of 1942, photographer Howard R. Hollem visited the base as part of his assignments with the Office of War Information and documented the life of the air navy cadets.

In the pictures, we can see how they prepared, trained, and maintained the facilities that became the most substantial resource of airplane production and aviator training during the days of the bloodiest conflict in human history. 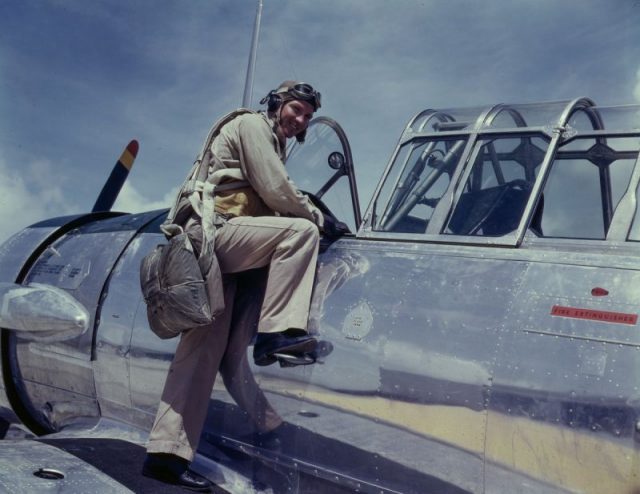 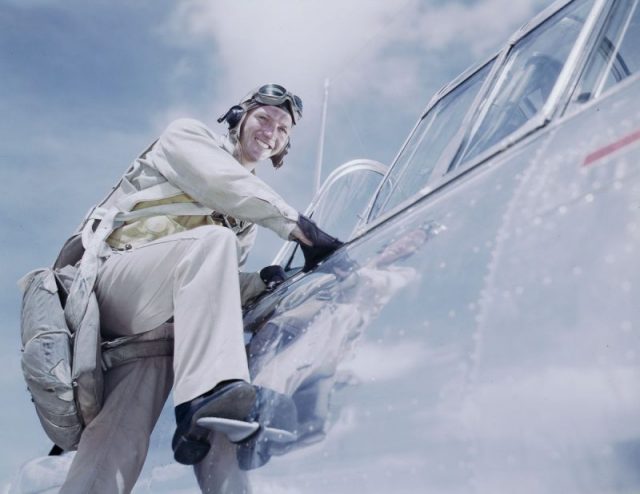 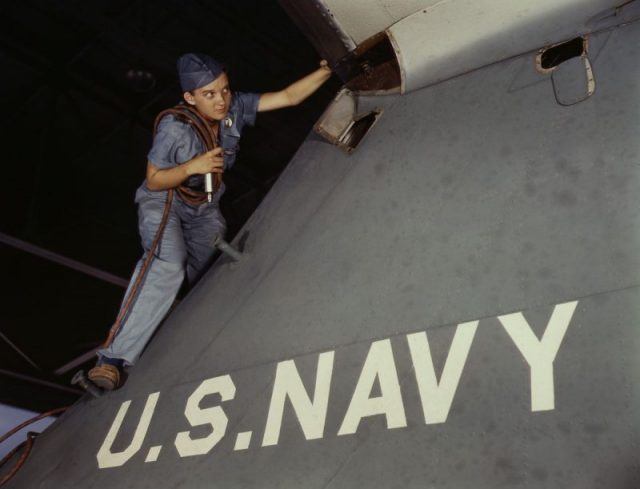 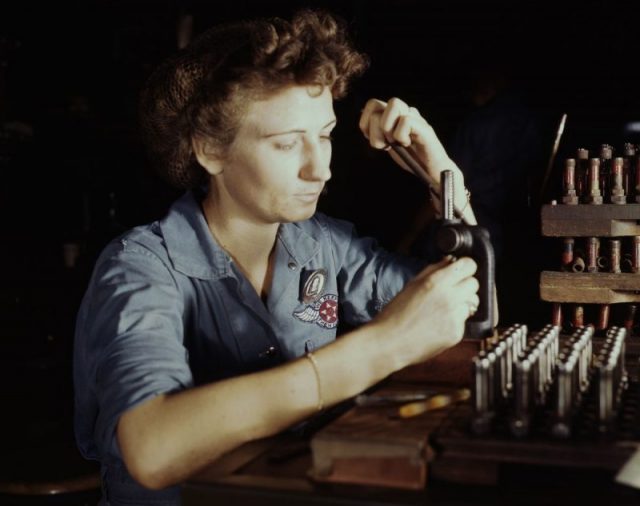 Back at the Assembly and Repair Department, Doris Duke works on reconditioning spark plugs. 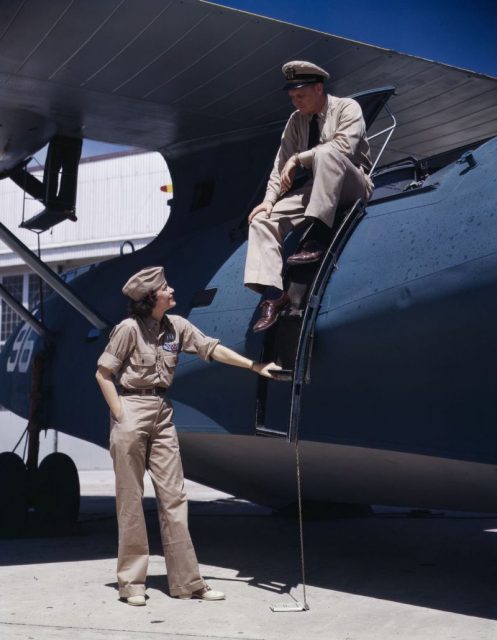 In this photo, the Assembly and Repairs Department’s senior supervisor Eloise J. Ellis chatting with another member of the team. 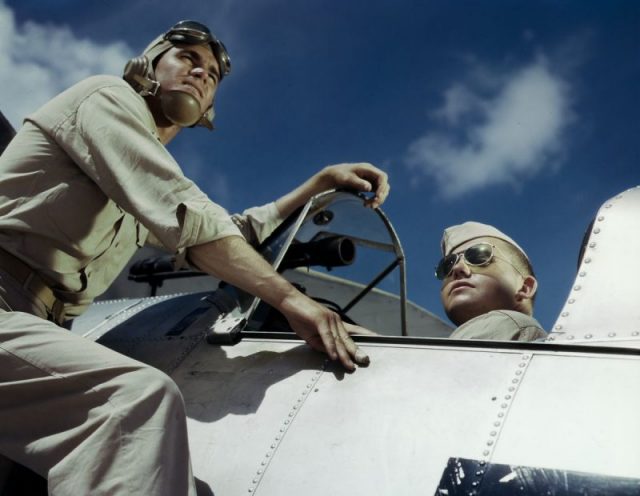 The faces of Ensign Noressey and Cadet Thenics while boarding on the plane. Notice the blue skies. 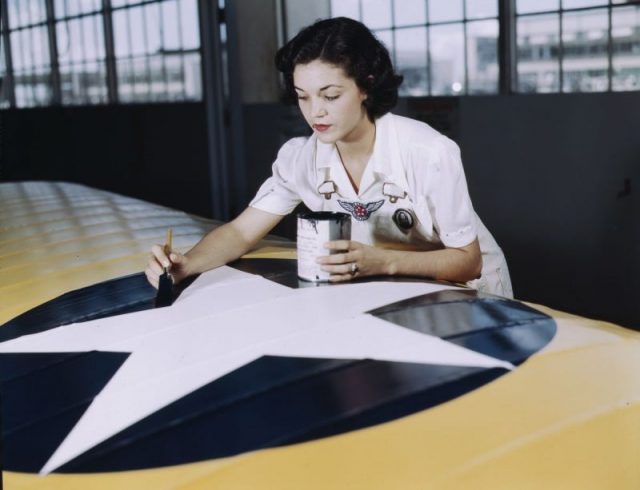 Everyone had a task to follow at the air navy base. Irma Lee McElroy, who used to work in an office, here takes care of the airplane wing’s insignia. 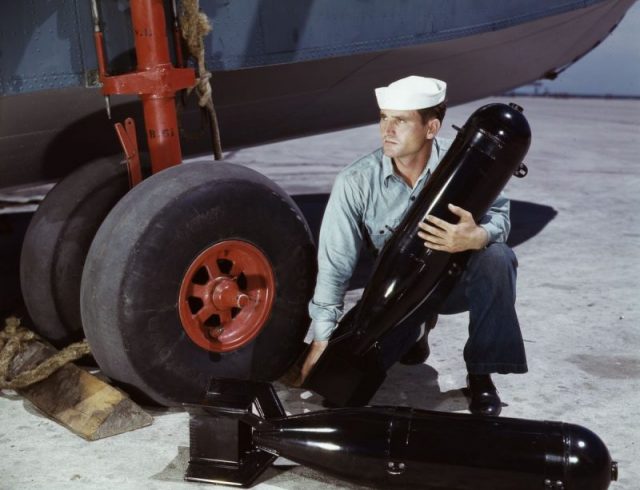 J.D. Estes, a seven-year Navy veteran, here loading some munitions into an aircraft at the Corpus Christi naval air station. 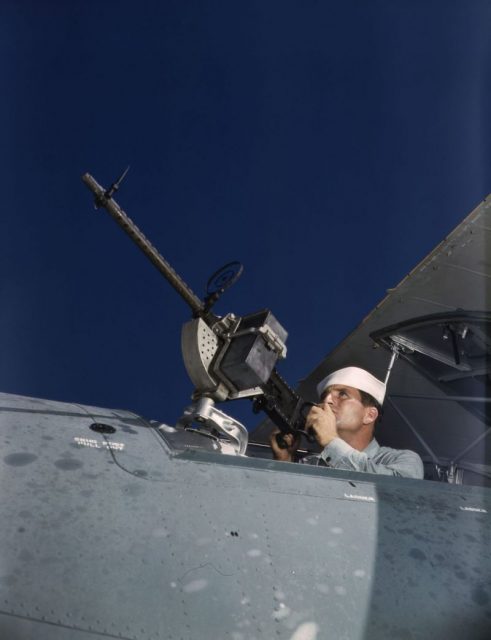 Test time: J.D. Estes seated in a plane and trying out a freshly placed machine gun. 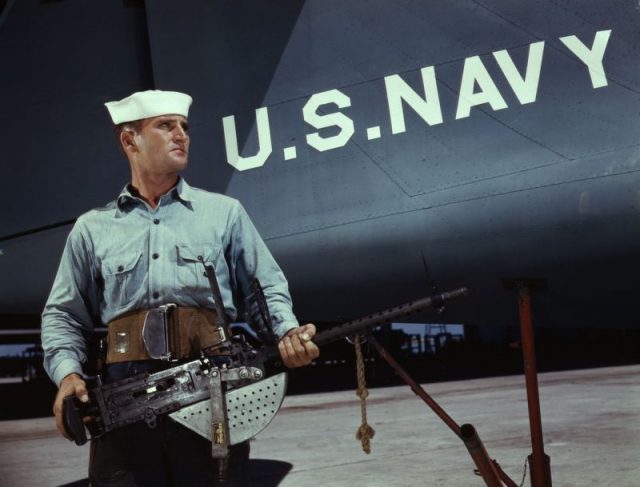 J.D. Estes carries a machine gun to be installed in one of the aircraft at the base. 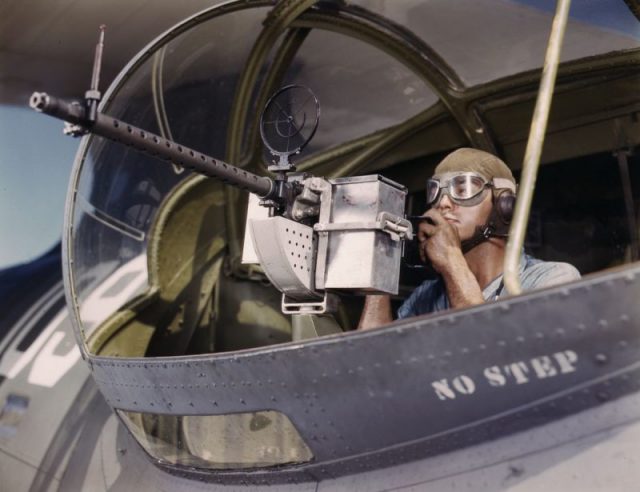 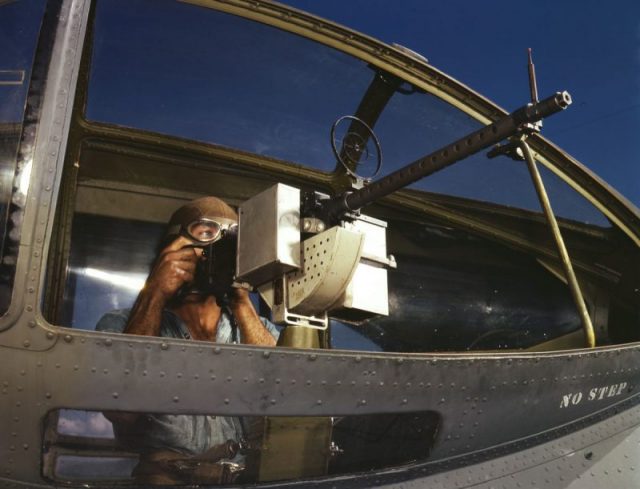 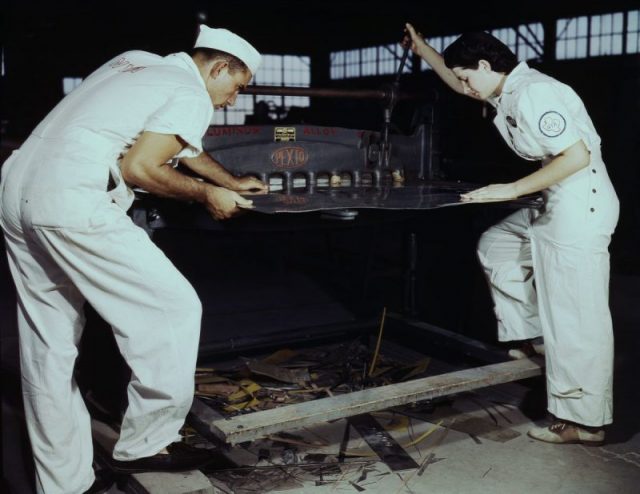 At the Assembly and Repair department: Two NYA employees polishing their skills with a cutting machine. Their training lasts two months, after which they will be fully prepared to carry out their civic duties at the Naval Air Base.

Activities at the base accelerated as the U.S. officially entered the war. More women were also employed at this point to help in different departments of the base, such as assembly and repair. Women actively worked next to men to help them in building and maintaining the aircraft. In a number of cases, they also monitored and supervised the ongoing activities.

By the end of the war, Corpus Christi became the place where over 35,000 people graduated and learned how to master an aircraft up in the war clouds. 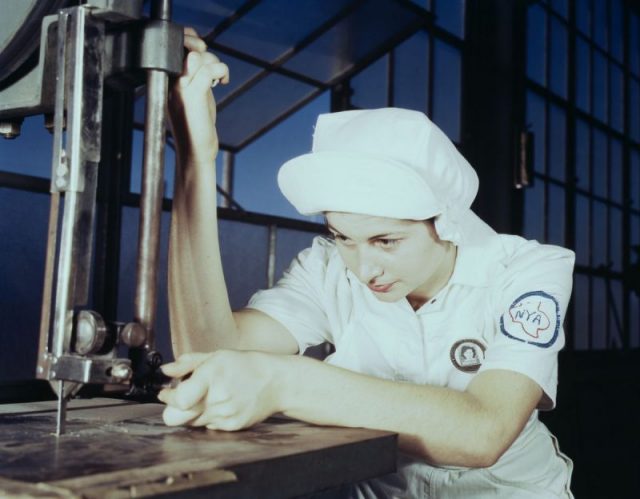 Mildred Webb, another NYA trainee at the Corpus Christi base, also learns how to run a cutting machine. 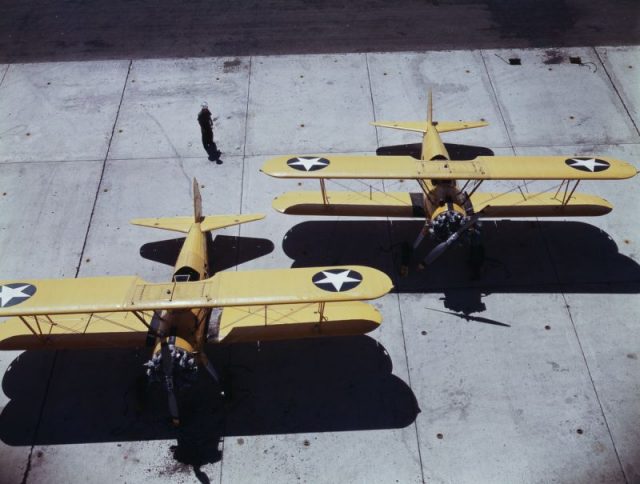 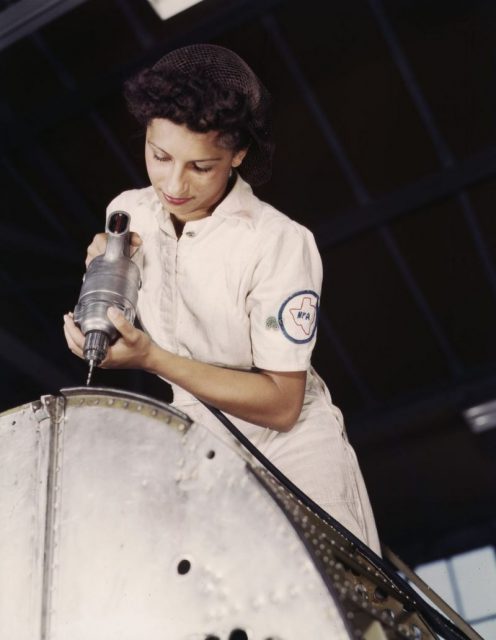 Oyida Peaks during her NYA training before becoming part of the mechanic team at the Naval base. During the war, many women were recruited to help running the bases. 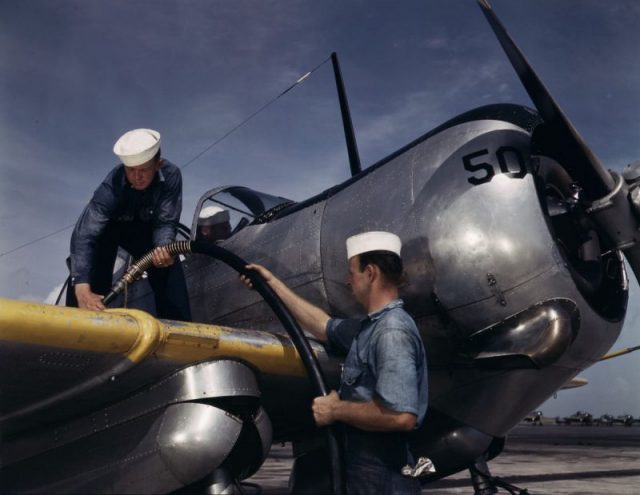 An SNC advanced training plane is replenished with fuel by two mechanics. 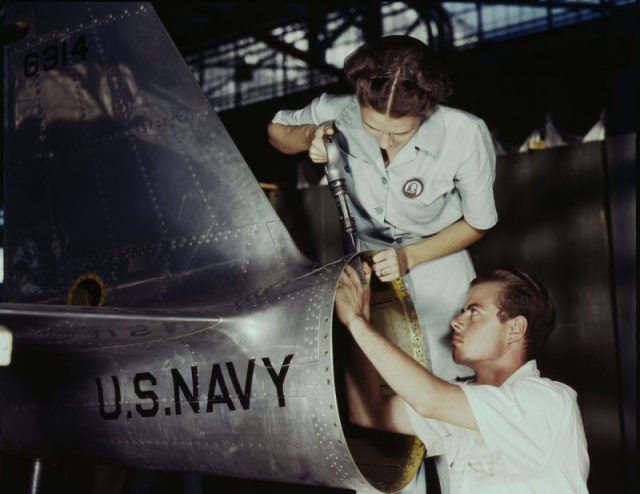 Sharing the knowledge: NYA trainee from Michigan, Charles Potter (on the right) receives training at the Assembly and Repair Department from Virginia Davis. 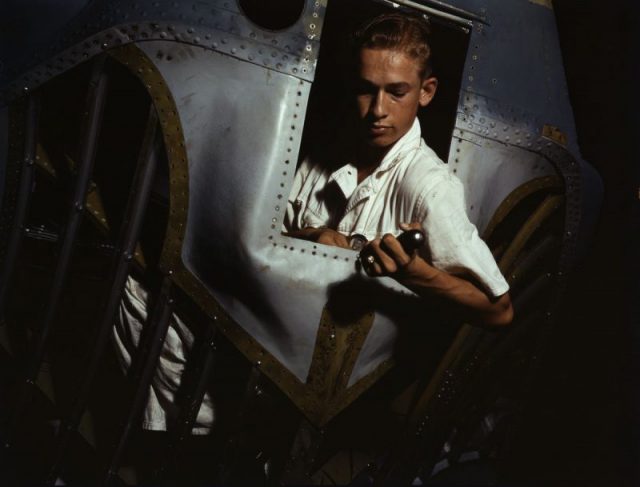 Another trainee Elmer J. Pace doing his assignment inside the nose of a PBY navy plane.

One of the most famous cadets of all was also the future President of the United States, George H. W. Bush. He completed his training at Corpus Christi just a couple of days ahead of his 19th birthday.

Related story from us: In 1940 two twin-engine airplanes collided mid-air–interlocked, they flew for five miles and landed safely

The Corpus Christi air-naval base is now remembered as the largest of its kind during World War Two. It not only helped the effort against Japan but also fostered later preparations for the Vietnam War.