When you think controversy, chances are you tend not to think about Dr. Seuss or children’s books in general. After all, these books, with brightly colored pictures and clever rhyming schemes, are often designed to be as fun and inoffensive as possible.

And while there might be the occasional book that is released with questionable themes, for the most part we tend to look elsewhere for controversial statements or ideologies. Few would imagine that the colorful, fun, and nonsensical books of Dr. Seuss generated controversy.

Who out there would look at the ridiculous Green Eggs and Ham and find some kind of controversial statement? Seuss’s work was primarily lighthearted and silly, meant simply to help kids want to read by making reading fun. It was harmless, or so one would think. 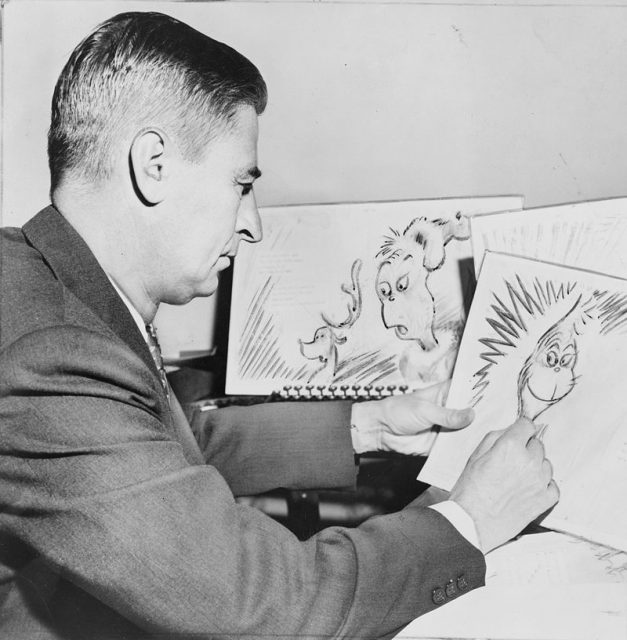 Geisel at work on a drawing of the Grinch for How the Grinch Stole Christmas! in 1957

In truth, Theodore Geisel, better known by his pen name, Dr. Seuss, wrote a few works that managed to generate some controversy, as he pushed the boundaries of what topics a children’s book could cover. One such controversy was the use of the word burp in the short story Yertle the Turtle.

Published in 1950, the word burp wasn’t seen as a particularly pleasant word and considered quite rude. There was an internal battle between the publishers and Seuss about the inclusion of the word, fearing that it would cause a serious problem with consumers who didn’t want their children exposed to the word. 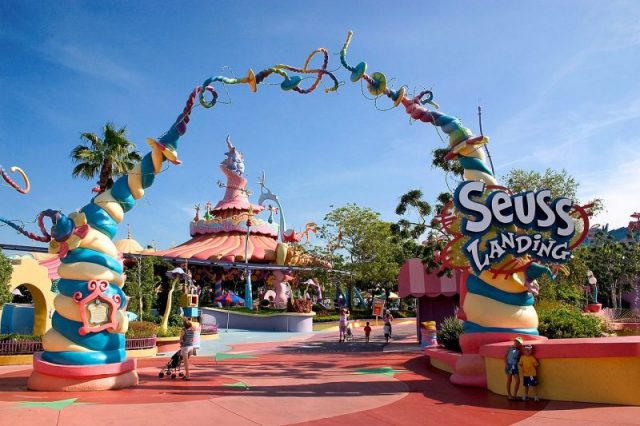 Seuss Landing at Islands of Adventure in Orlando, Florida. Photo by David Bjorgen CC BY SA 2.5

In the end, they decided to release the book with burp intact and sure enough, the book became a hit. One of his books, The Lorax, had a strong environmentalist message and spoke about the dangers and evils of the logging industry.

Even as late as 1989, the Laytonville, California, School District made a push to ban the book, as officials feared that it would turn children against the logging industry. This censorship, thankfully, did not stand. 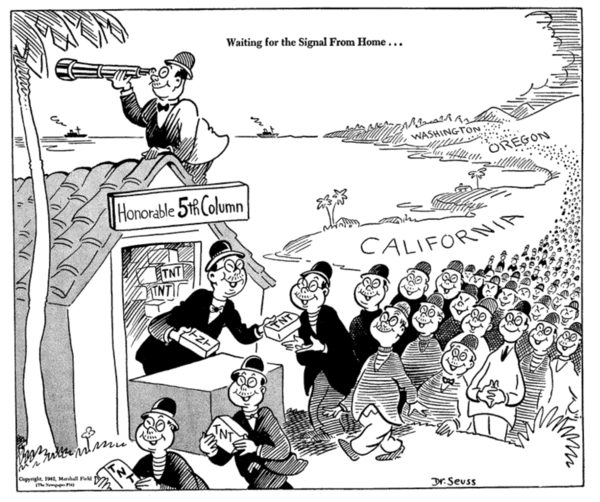 Dr. Seuss 1942 cartoon with the caption ‘Waiting for the Signal from Home’

Dr. Seuss himself had more than a few controversial cartoons that weren’t meant for children to consume at all. One book, The Seven Lady Godivas, which was full of nude cartoon women, was released during the Great Depression in 1939. Due to the content, few people wanted anything to do with the book and as a result, it didn’t sell nearly enough to make a profit.

This would cause Dr. Seuss to rethink his target demographic and motivated him to put his energy more into writing for children. During World War Two, Dr. Seuss was employed producing various political cartoons for a New York newspaper known as PM. 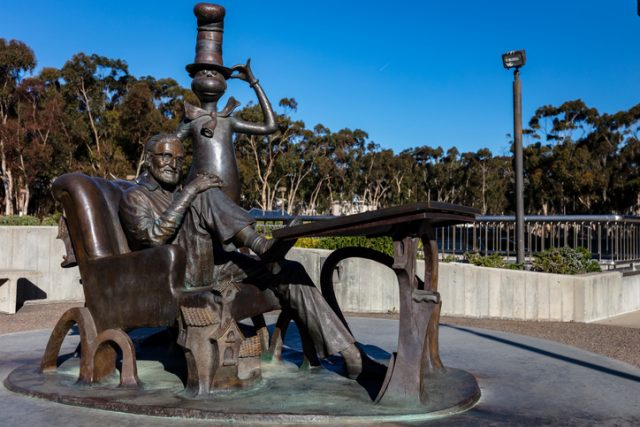 During this time, he would write cartoons that many people today would find to be abhorrent with extremely racist tones, especially toward the Japanese.

While it might not have been controversial at the time, for those who grew up reading Dr. Seuss books, finding out that your favorite author held some extreme views towards other races can be a shock.

Fortunately, Dr. Seuss’ views evolved after the war. After visiting Japan, his beliefs shifted, so much so that he ended up writing several books about racism. 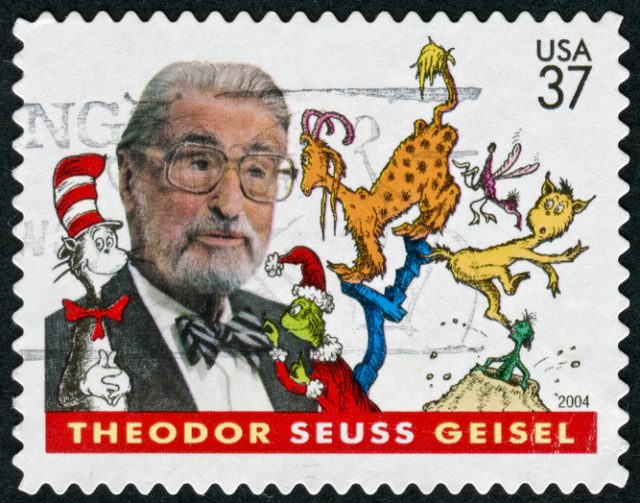 One book was Horton Hears A Who!, a tale about an elephant that was the only creature able to hear the small civilization of Whos who lived on a speck of dust.

The line “a person’s a person, no matter how small” highlights this change of heart. While many know Horton the elephant from Horton Hears a Who! the character was actually first featured in the book Horton Hatches the Egg in 1940. 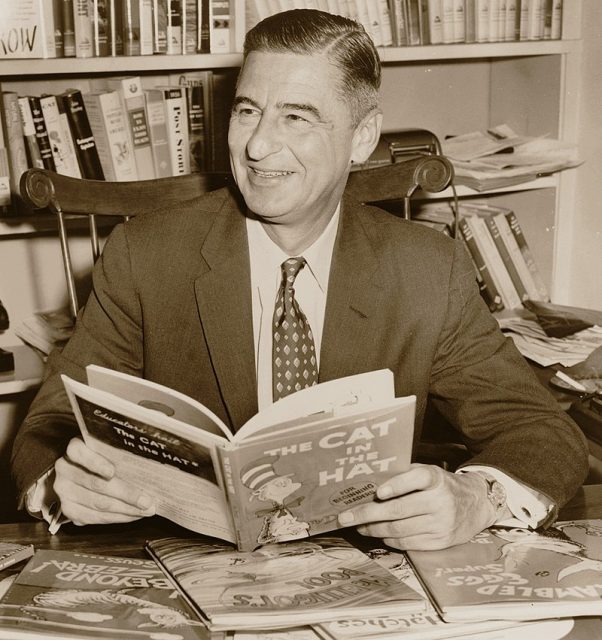 In this story, a mother bird named Mayzie was exceptionally lazy and didn’t want to sit on her egg until it hatches. So, she tricked Horton into sitting on the egg for just a little while so she could vacation. After he agreed, she took off for Palm Beach and never returned, leaving Horton to hatch the egg all by himself.

While the story itself was rather nonsensical, as it ended with the egg hatching and revealing a half-bird, half elephant creature, there was some criticism about the sexist elements of the book. 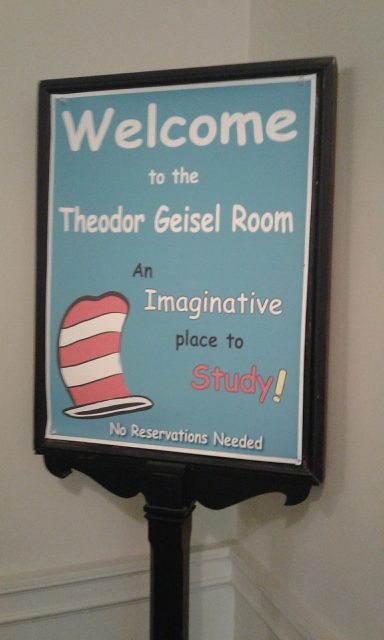 Dr. Seuss, while not responding directly to Lurie, mentioned to his biographer that most of his characters were animals and “if she can identify their sex, I’ll remember her in my will,” according to Dr. Seuss & Mr. Geisel: A Biography.

The last controversial book that Dr. Seuss wrote before his death in 1991 was The Butter Battle Book, a book that posed the dangers of mutual assured destruction through nuclear war. It depicted two nations in a war, with one nation eating their toast with the butter side up and the other with the butter side down.

They both believed in the supremacy of their bread position and warred over it. The story ends with the two generals holding extremely powerful bombs in their hands, threatening to drop it over each other’s walls. It’s hard not to see this as an allegory for the Cold War. 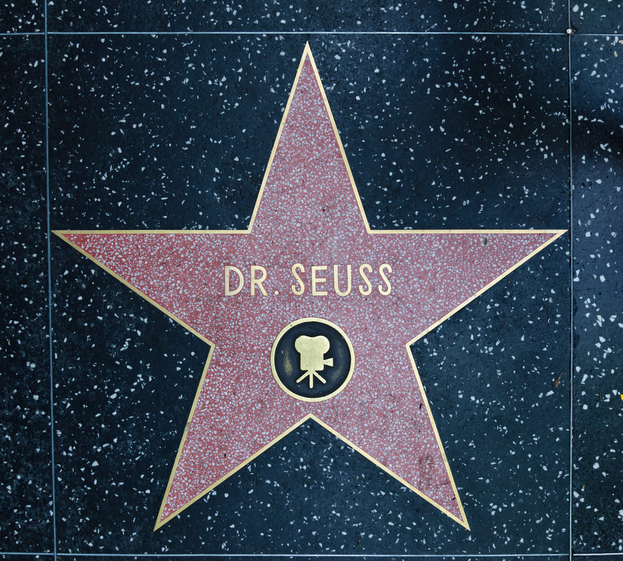 The Hollywood Walk of Fame star of Dr. Seuss located on Hollywood Blvd. that was awarded in 2004 for achievement in motion pictures.

The problem with the book wasn’t that it portrayed nuclear war as bad, but rather that it portrayed the differences between the United States and the Soviet Union as nothing more than a simple matter of preference.

Some Canadian libraries went as far as to ban the book, to prevent this viewpoint from spreading. Of course, with the Cold War long over, the book itself now stands as an impassioned plea about the dangers of the arms race and nuclear war.

Related Article: The Transformation of Ted Dreisel into “Dr. Seuss” – Why did he Choose that Name?

For while Seuss might have written a few works that generated some kind of controversy, the truth was that he really cared about the world, about children, and most of all, about teaching lessons through whimsy and nonsense.