The Navajo Nation is today recognized as the second largest Native American tribe in the United States. Some 1,000 years ago, their ancestors, along with those of the Colorado River tribes and the Apache, are believed to have migrated to the Southwest from western Canada and eastern Alaska.

The Navajo played an important role in World War Two, when at one point the Navajo language was used as a secret code. The Navajo Code Talkers were famously employed to relay radio messages in their own complex language, which the Japanese were unable to decipher.

The first Navajo land in New Mexico was called Dine’tah. Here the hunter-gatherer bands encountered the Pueblo Indian tribes, from whom they learned to farm. Corn and beans became staple crops, as did squash, which had multiple purposes aside from food. Navajo culture soon spread throughout the states that later made up the Four Corners: Arizona, Colorado, New Mexico, and Utah.

Clothing was normally made from deerskin and yucca plants. Women would opt for skirts and men for breech cloths. Similarly to other Native American tribes, leather moccasins were a popular choice of footwear.

Dramatic change came with the arrival of the first Europeans, more precisely the Spaniards during the 17th century. The Navajo absorbed the Spaniards’ ability to ride horses and soon excelled them in horsemanship skills. Some groups also started to keep sheep and goats. They began to spin the wool to make blankets and clothing, and this also became a source of artistic expression. 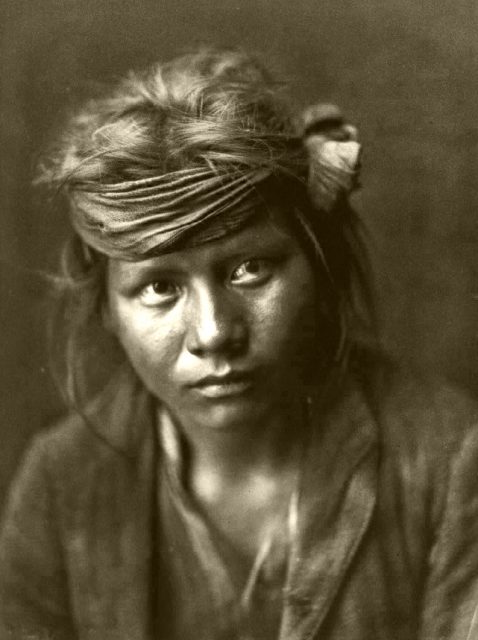 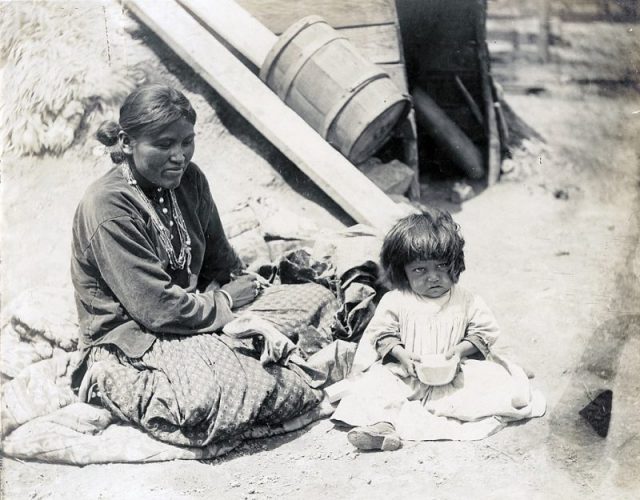 Navajo mother and child – this image was displayed in the Department of Anthropology at the St. Louis 1904 World’s Fair. 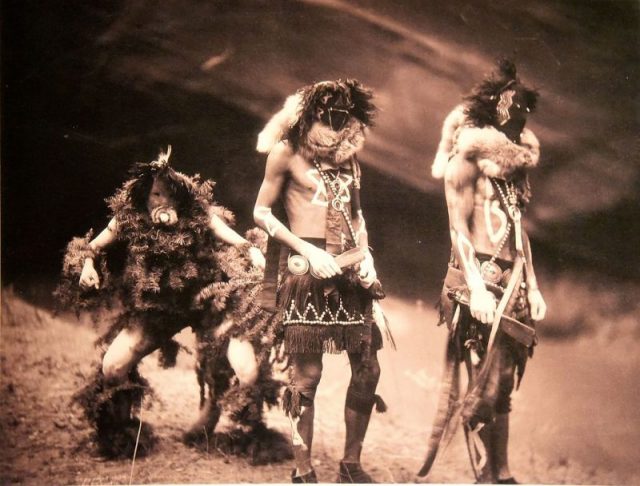 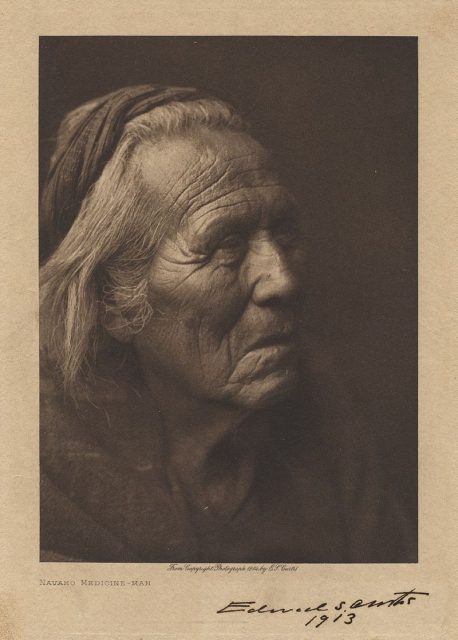 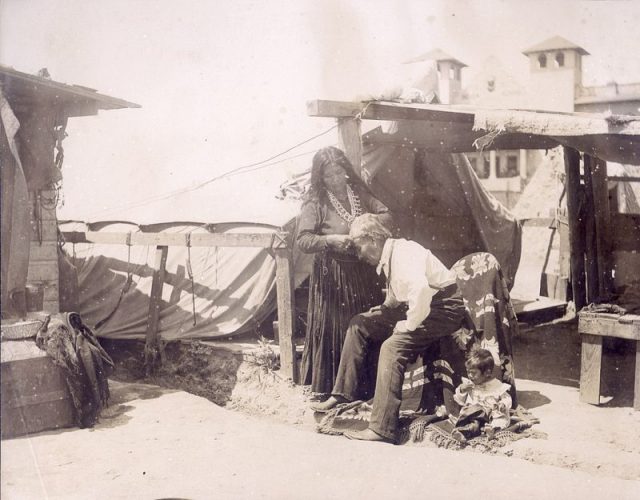 Hair has a special meaning for many ancient cultures, from Native American tribes to Sikhs. How the hair is worn and when (or indeed, if) it is cut holds great significance. 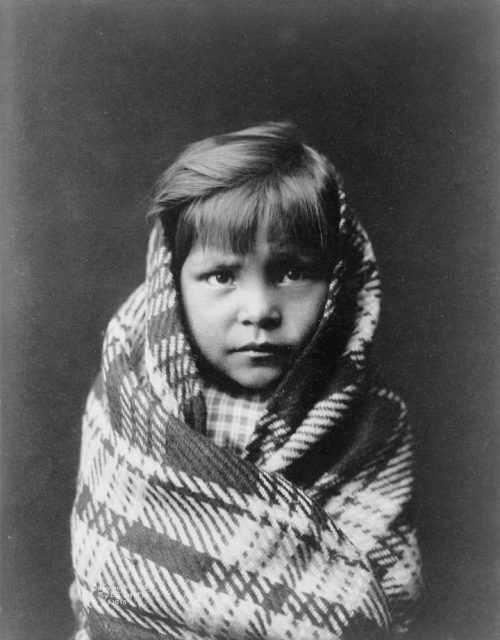 Traditionally the Navajos called themselves Dine’é, which simply means “The People.” 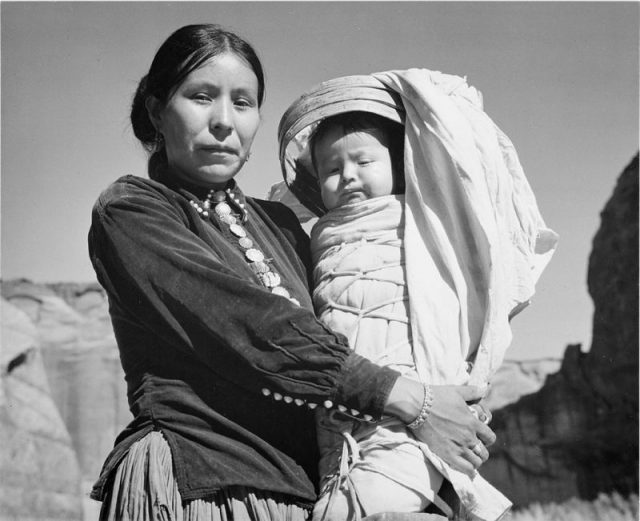 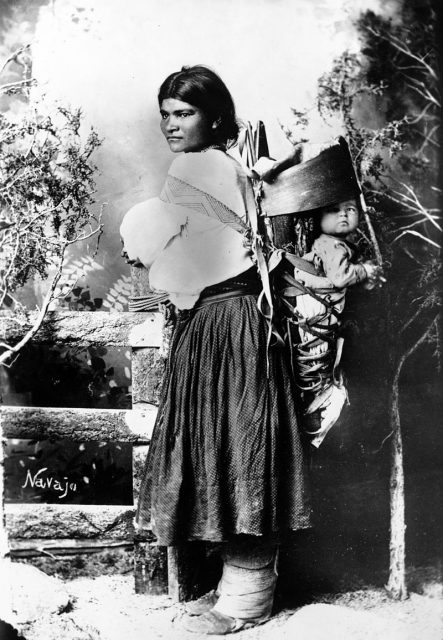 Strange and mysterious Islands from around the world. 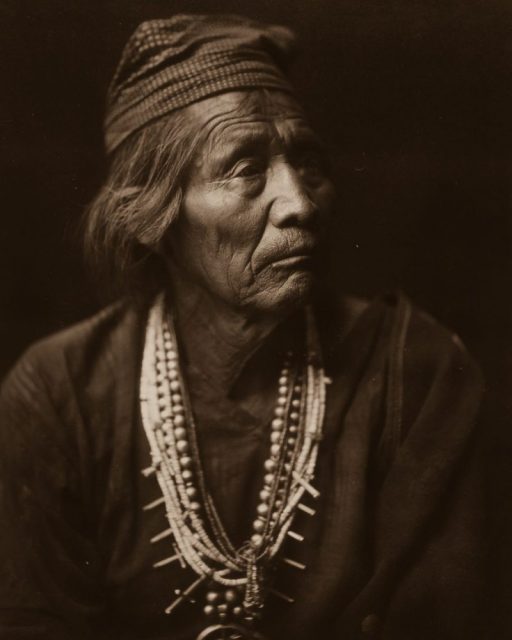 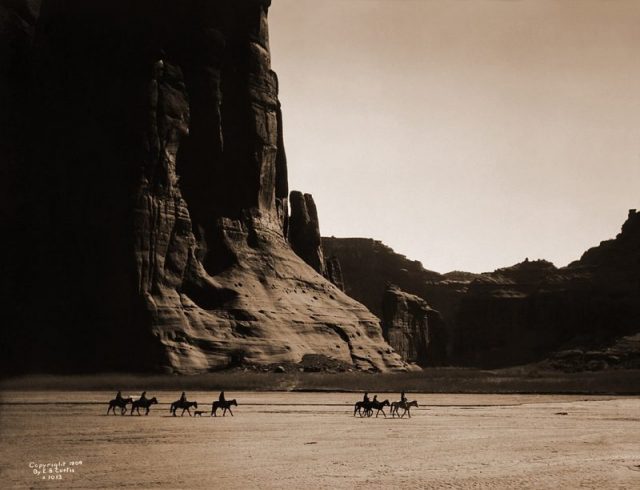 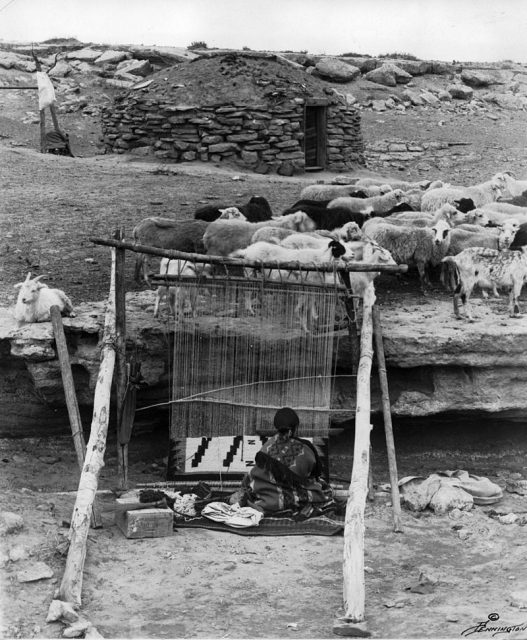 A weaver works at a traditional vertical wooden frame loom. Navajo blankets and rugs are considered some of the most colorful and best-made textiles produced by North American Indians. 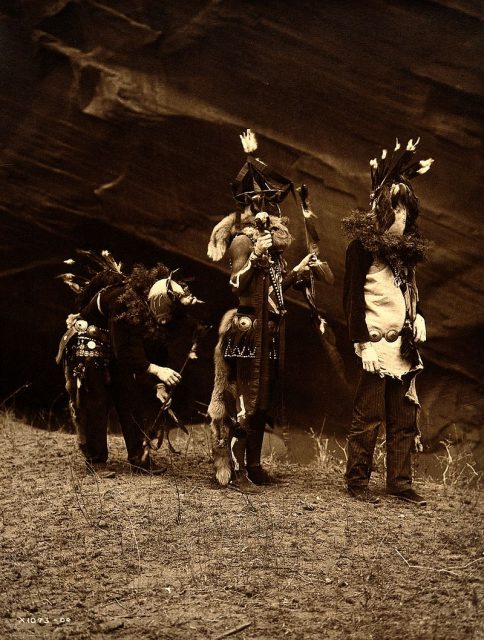 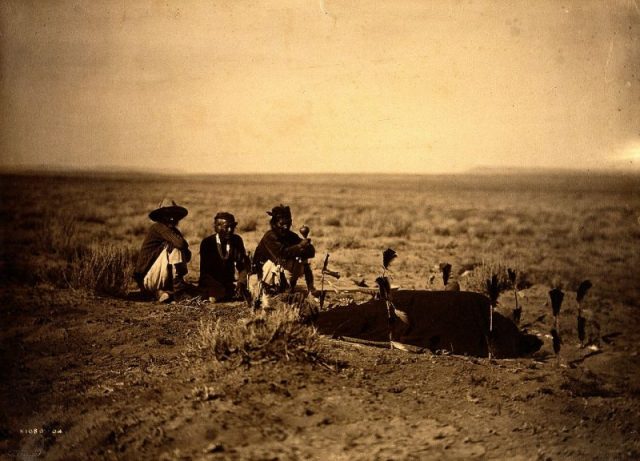 A photograph of Navajo medicine men overseeing a sweat during a Yeibichai ceremony, published in Volume I of The North American Indian (1907) by Edward S. Curtis. 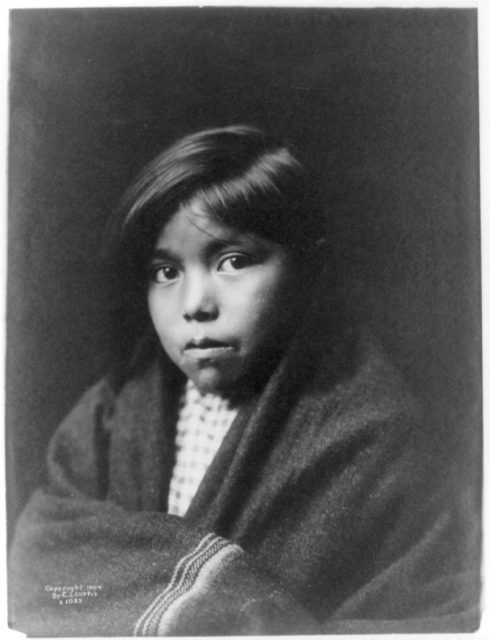 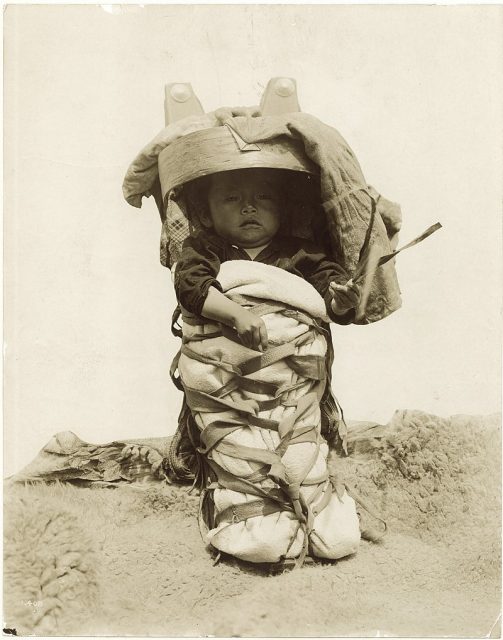 Navajo child and cradle board, from the Arizona Department of Anthropology exhibit at the 1904 World’s Fair. 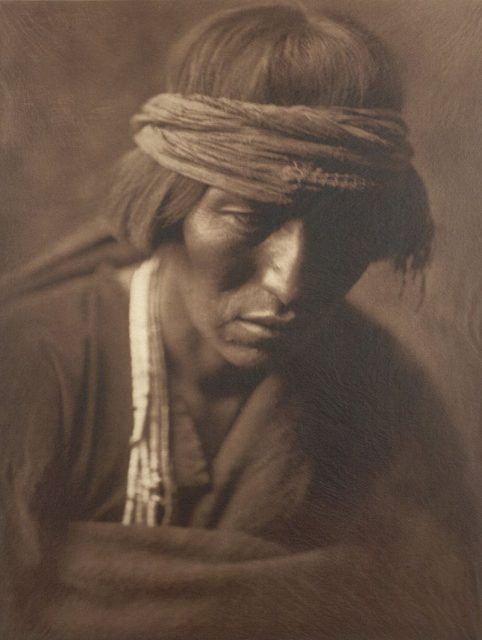 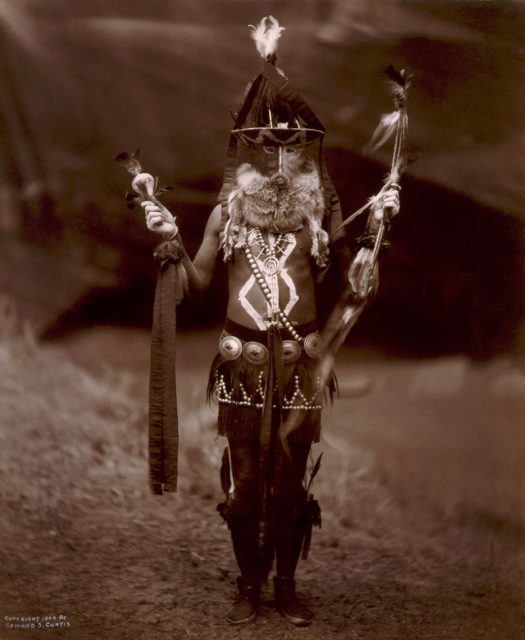 A Navajo man, full-length, in ceremonial dress including mask and body paint. 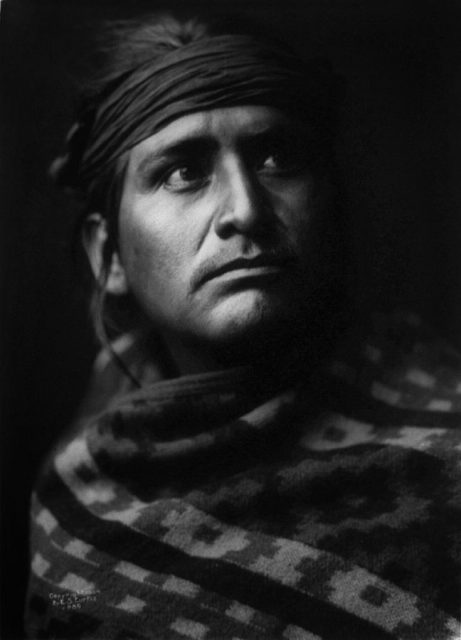 The traditional headdress worn by the Navajo men was a leather cap; this was later replaced by a simple cloth or leather headband. 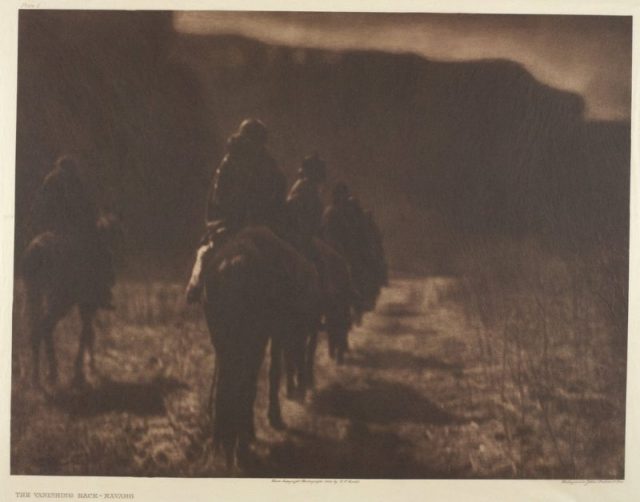 Navajo ancient lore tells that “The god Begochiddy originally created the horse for the Diné people.” 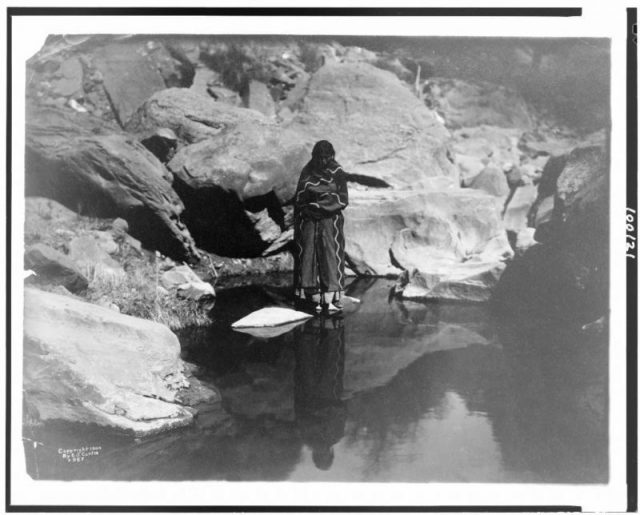 Navajo Woman standing on rock, reflected in a pool of water. Her skirts would have been woven from yucca fiber.

The habit adopted from the Spaniards of taking care of goats and sheep not only added their wool as a material for clothes but also a new type of meat to the Navajo menu. Rabbits, deer, prairie dogs, and other animals were all hunted for sustenance.

Navajo rugs were deemed particularly precious. They would be worn like a cloak in cold weather, and became a valuable trading commodity. Traditionally, mothers taught their daughters every step of the process, from cleaning the wool to weaving a perfectly symmetrical pattern.

Even to this date, hand-woven Navajo blankets and rugs are paid a high price.

Other Navajo arts include crafting jewelry. Turquoise is a favorite material due to its ceremonial value as well as aesthetic beauty. The beautiful combination of turquoise set in silver was begun by Atsidi Sani  around 1865. The first Navajo silversmiths would melt down Mexican pesos and rework the metal into conchos and other Navajo jewelry.

The traditional Navajo home is a hogan, domed-shaped shelters made from wood that is covered in mud. One could enter the hogan only from the east, the place where the door was positioned. This was done so that the Navajo could always see the sunrise, and begin each new day with it.