How Skylab racked up a fine for littering

The purpose of this station was for astronauts to conduct experiments, learn more about solar astronomy, and document the effects on a human being from living in space for an extended amount of time. 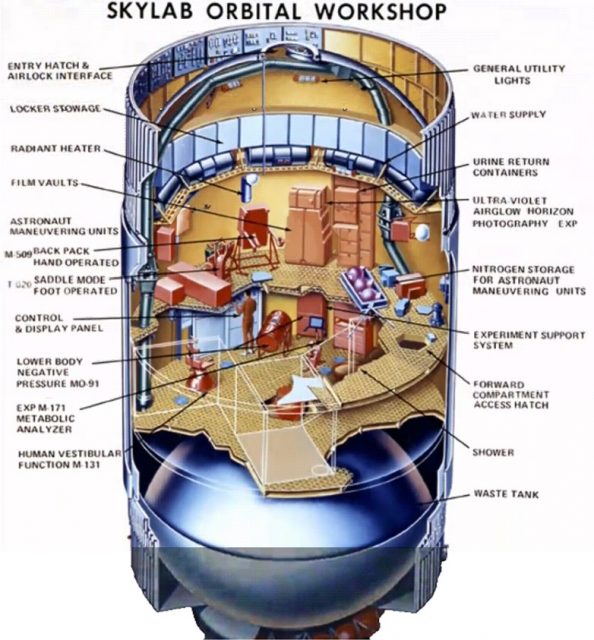 As Skylab orbited Earth for six years, NASA began to realize that the station’s orbit was beginning to decay.

While a lot of energy and effort had gone into preparing Skylab to be fired upwards into space, there hadn’t been as much discussion and preparation for Skylab’s return, despite the fact that the mission was only planned to be a nine-year-long stint.

There were no controls onboard that would allow Skylab to navigate to a landing pad. In other words, Skylab’s reentry to Earth would be unpredictable and problematic. 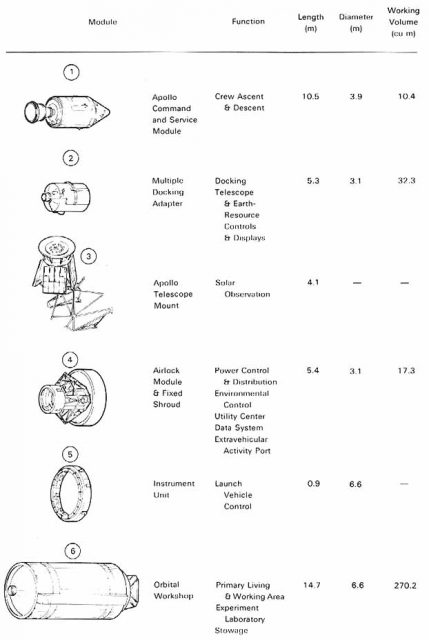 As Skylab began to make its way down to Earth in 1978, attempts to gain control of the station were made.

One such plan was to send another shuttle up to push the ship into high orbit, where it would continue to orbit until its power ran out, leaving it as a harmless piece of debris that threatened no one.

But funding problems and other bureaucratic issues plagued the program, preventing them from accomplishing their goal in time.

Skylab would rapidly make its entry into the atmosphere and threatened to crash into just about anywhere on earth. 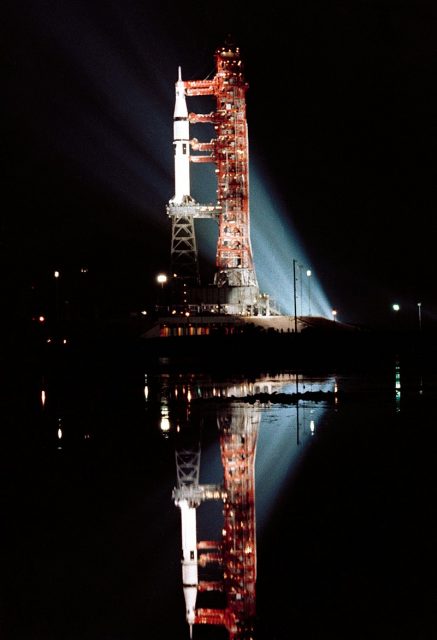 Thanks to some manipulation of Skylab’s boosters, the NASA crew members were able to get the station aimed toward the Indian Ocean, but there was still no way of knowing exactly where it would land.

This brought international attention to Skylab and a media spectacle ensued. 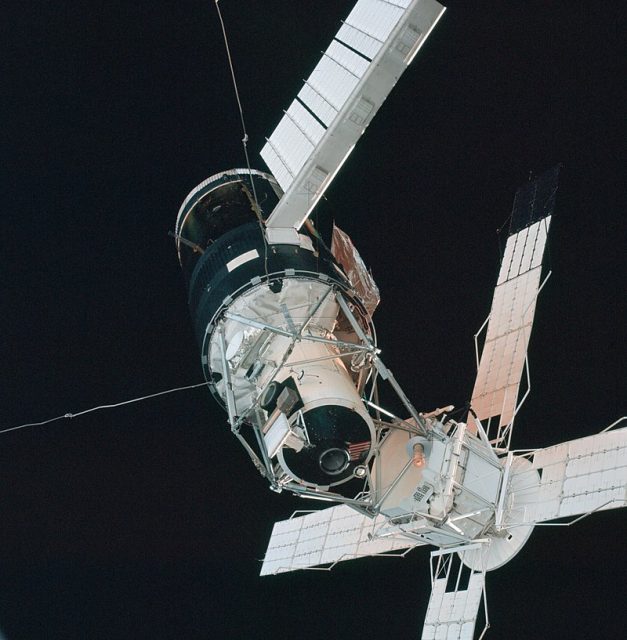 Skylab in orbit in 1973 as flown, docking ports in view.

In June of 1979, Skylab mania was in full swing. With the station now approaching re-entry, T-shirts with bullseyes were being sold. A town in Nebraska even went as far as to paint a giant bullseye so that Skylab would have something to aim for.

The press took advantage of this event, with the San Francisco Examiner offering a prize of $10,000 to the first person brought a piece of Skylab debris to their office when it crashed.

The official forecast for Skylab’s landing would be somewhere between the 10th and 14th of July.

Sure enough, on July 11th, Skylab began re-entry, burning up, although not nearly as quickly as NASA had been hoping for. The debris ultimately ended up landing over West Australia, with pieces scattering across the continent.

One young man, a 17-year-old, was able to get his hands on a piece of debris and made his way to San Francisco, to collect the prize offered by the Examiner. 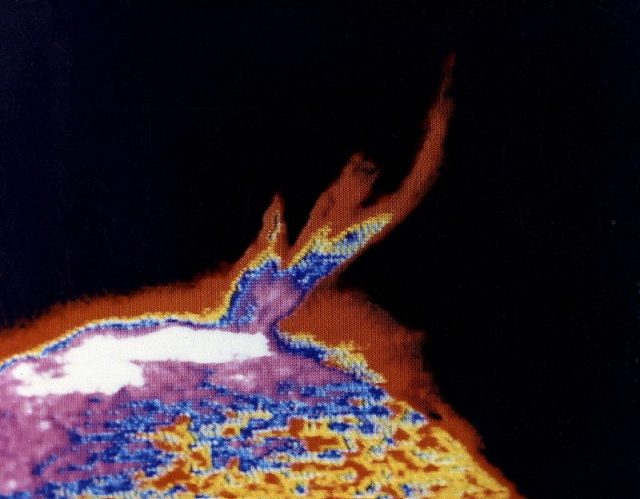 With a majority of debris landing in Esperance, West Australia, a fine was issued by the municipality, claiming that NASA had littered on their property and they were owed $400. This fine, of course, was a joke of sorts and NASA had no interest in paying it.

The fine would go unpaid and ignored until 30 years later. 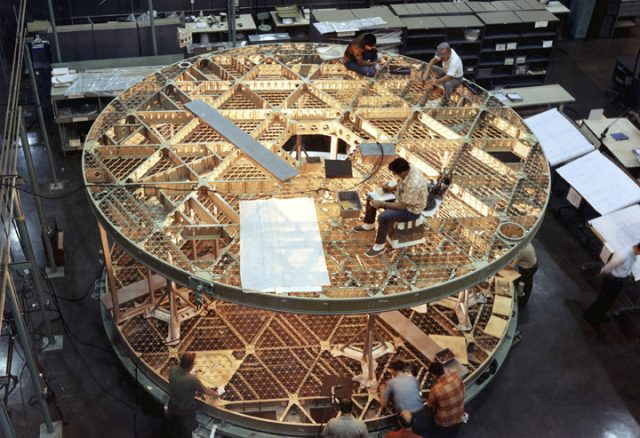 The floor grating of Skylab under construction.

Scott Barley, a DJ for Highway Radio, a California-based radio station, heard about the story of Esperance issuing a fine to NASA in 2009.

Realizing there was an opportunity to have some fun, Scott began a fundraising effort over the radio, to raise the money so they could formally pay off the fine.

His efforts were successful, and he was able to raise the $400 necessary to take care of NASA’s unpaid littering ticket. 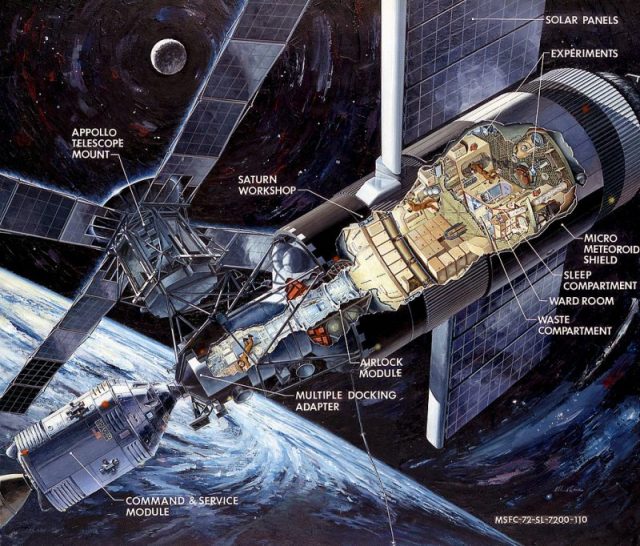 This artist’s concept is a cutaway illustration of Skylab with the Command-Service Module being docked to the Multiple Docking Adapter.

He shipped the check out to Esperance and eagerly awaited their reply.

Two months later, he received an invitation from the town of Esperance to attend the 30-year anniversary of Skylab falling. He would be given an oversized check for $400 so that he could formally present the money to the town.

Esperance town leaders would even go further by making Scott’s city, Barlow, California, into their twin, pairing the two over the crash landing of Skylab.