Horseback librarians during the Great Depression

With the crash of the stock market in 1929 and over 15 million Americans losing their jobs, education and flexibility became the most powerful allies one could have.

Banks were closing and with them businesses and factories. Unemployment was widespread.

Schools began to shut down because the government could no longer afford to pay all of the teachers’ salaries and education was limited.

Especially in the rural areas, schoolhouses were hit hard. These students began to walk or ride horses over long distances to reach classrooms, while many were needed on farms and could only attend classes a few months a year.

When President Franklin D. Roosevelt took to the Oval Office in 1933, he initiated a program called the New Deal that was a series of programs designed to restore the economy and help families provide for their loved ones.

A pack horse librarian reads aloud to a man in the Kentucky mountains.

Of these series of programs, the WPA (Works Progress Administration) was created, which employed millions of Americans.

One of the smaller, yet most creative projects the WPA started was the Pack Horse Library. About one-third of all Americans had no access to public library materials at that time, and many had never even owned their own book.

So, from 1935 to 1943, teams of mostly female librarians were hired by the Pack Horse project to deliver books over long distances on horseback and by mules across the Appalachians and other regions that were geographically cut off from big cities, education and support.

The lack of roads and population hurt the area educationally because there were not only fewer schools around but also no public libraries.

When the schools closed, Kentucky’s population was one of the most affected as a staggering 31 percent of its people were illiterate.

The libraries worked like this: Community members donated books and provided locations for the books to be stored as well as supplies for the carriers and their horses.

Each local pack-horse library had a supervisor who took in the donations and patched up the books before sorting them out to the carriers.

The librarians made regular calls at mountain schools. The little stone school shown here was built by the WPA in Kentucky and replaced an antiquated log building.

Cardboard cheese boxes and license plates were repurposed as card catalogs and bookends to organize the library. The books were then sent out to locations based on the preferences of readers in the area.

Packsaddle librarians could carry around 100 books in their saddlebags. Materials were delivered to the locations, homes, and schools.

The books were then collected and rotated to other areas. The librarians met monthly in central locations to rotate books with other packs and discuss challenges and solutions. In addition to all of this, the librarians also offered reading lessons.

At first, the locals were skeptical about using the program and even rejected it. The persistent librarians, dedicated to the fight for education and literacy, began to gain their trust by quoting Bible verses. This relaxed the people, and they began to look forward to their weekly deliveries. 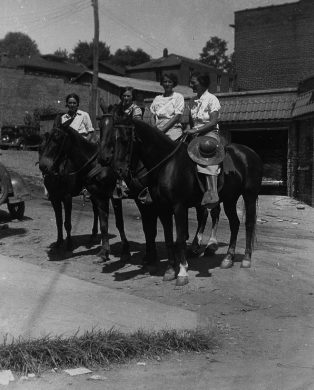 The donated library materials ranged from philosophical literature to newspapers and magazines. The Bible and “Instructive Literature” were some of the most frequently requested books.

Other popular books were Robinson Crusoe and those written by Mark Twain. Women often requested magazines on health and parenting. For the kids, many had never owned a book and were hungry to read just about anything. The libraries lent the books out on a weekly basis.

Conditions for the “book ladies,” as the saddled librarians were also called, were pretty rough. For starters, each librarian was required to provide her own horse or mule. Some of the carriers rented them from nearby farms.

The journeys they made were often through dangerous terrain, passing through deep water and up steep cliffs. One pack librarian had to walk 18 miles by foot after her mule died en route. All of their hard work was for just $28 a month.

Trails could be difficult and dangerous, except where the WPA had completed its farm-to-market road program.

However, these librarians were often the only ones working in the family and were providing for their households.

In 1943, the WPA stopped funding the project. The Pack Horse Library developed into bookmobiles that delivered literature to rural areas. Surprisingly, bookmobiles still exist in Kentucky. In 2014, more than 75 bookmobiles were still cruising around, wheeling and dealing books to Kentuckians all over the state.

Stacey Watson is a Mississippi native currently living in St. Petersburg, Russia. She is the author of Ships Are For Sailing – a blog about navigating life in Russia.