The vibrant horse-drawn vardo wagons of the Romani people were at the cultural heart of the British Romanichals (Romani) from the mid-1800s into the early 20th century.

These sometimes opulent-looking caravans were more than just cozy and warm homes that housed the Romani families who were always on the road. A vardo wagon attested to the economic status of the family as well as supporting the age-old nomadic way of life of the Romani people.

They were probably first used by traveling showmen and slowly came to replace the older “benders”–tents made with a hazel frame covered by canvas. They allowed freedom to travel the country and trade everything from horses to brooms.

As we can see in the photos, vardo wagons are a work of art in their own right. It takes real craftsmanship and effort to build and decorate one. There are six distinct types: Burton, Brush, Reading, Ledge, Bowtop, and Openlot.

In the old days, families would have moved from farm to farm, pursuing work according to the season. The winter was time to rest, usually parked near some town or a bigger city. Romani also made an income from various trades, such as tinsmiths, hawkers, tinkers, and horse dealers. They were known for playing lively music and could reputedly make or mend anything.

The wagons were typically elaborately decorated on the outside. The more lavish the decor, the wealthier the family. For instance, if a cart was gilded with gold leaf, it meant the Romani family which owned it was particularly affluent.

Specific patterns and designs on the vardo were almost always associated with their artist. A well-known design likely meant a reputable craftsman. Many of the designs were inspired by nature and wildlife, therefore the recurrent flowery patterns.

And how was life on the road with these beauties? 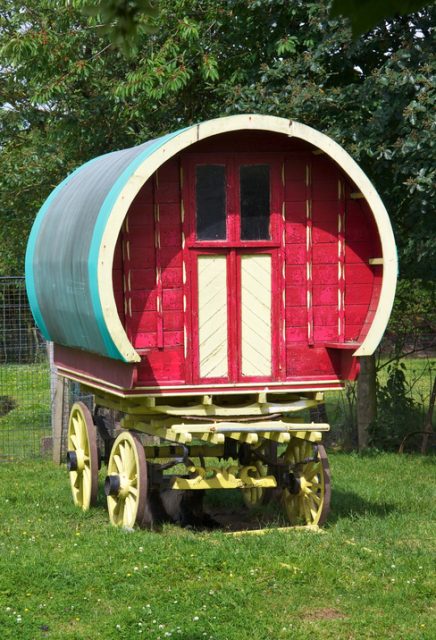 A horse-drawn Bowtop caravan standing in a field in Ireland. 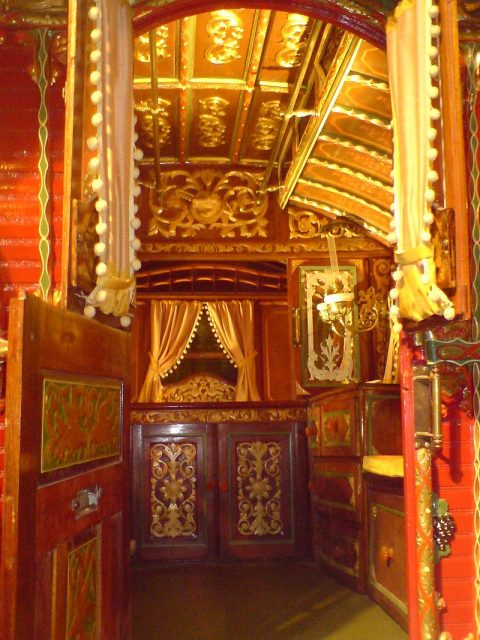 Interior of a Reading wagon, as used by the British Romani (Romanichal), donated to a museum by a family from Rhu, Scotland. Photo by Sunset through the clouds 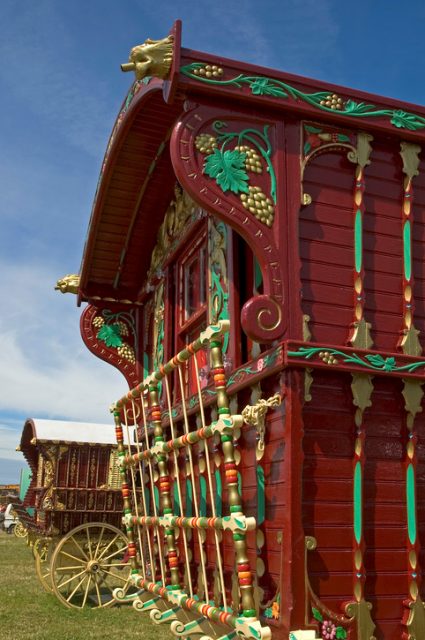 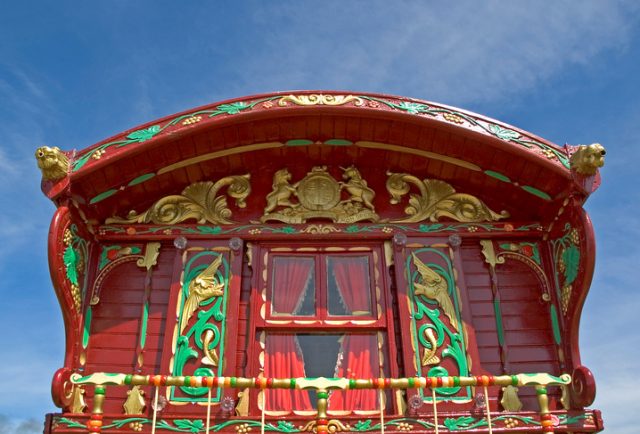 A Romani caravan, decorated with the Royal Coat of Arms of the United Kingdom above the window and two traditional Romanichal Chiriklo (bird of happiness) on the shutters. 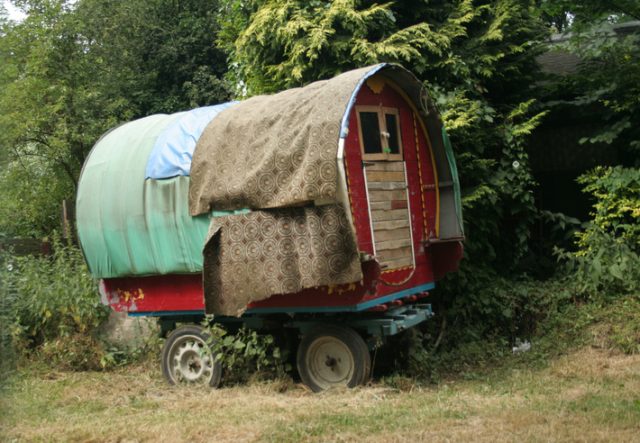 Patched-up wagon which was a home to Roma people and used to be pulled by horses to travel around the countryside but sadly it is not in use anymore. 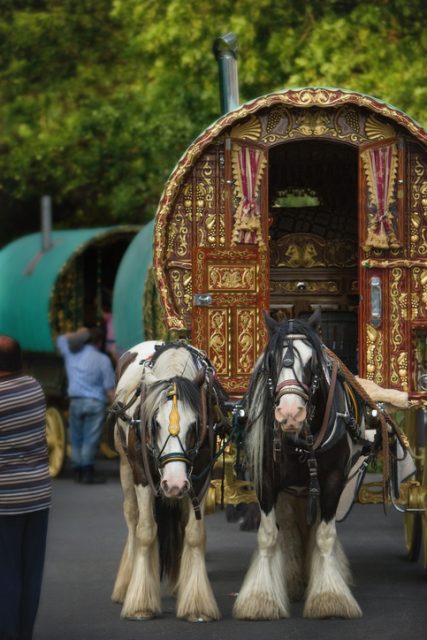 Romani on the move – horses pulling a beautiful Bowtop. 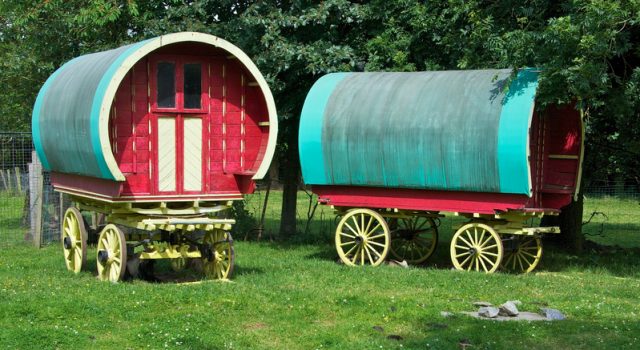 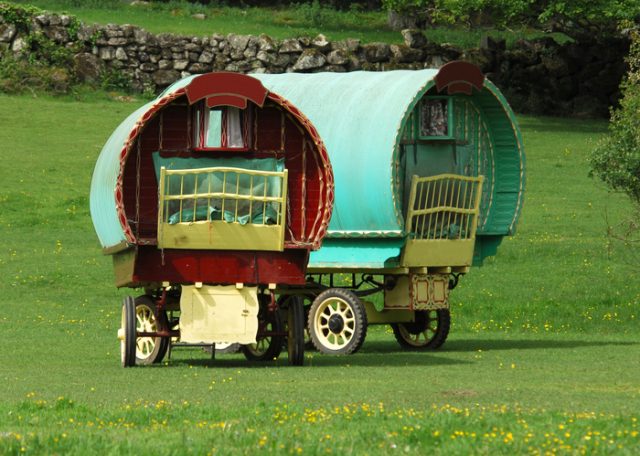 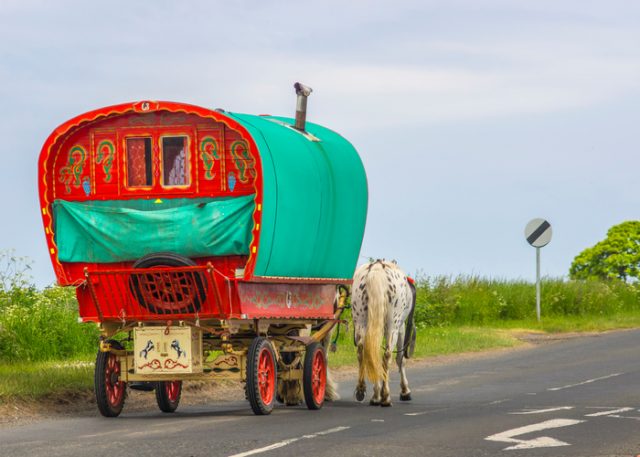 Ghost ships have fuelled the imagination for centuries 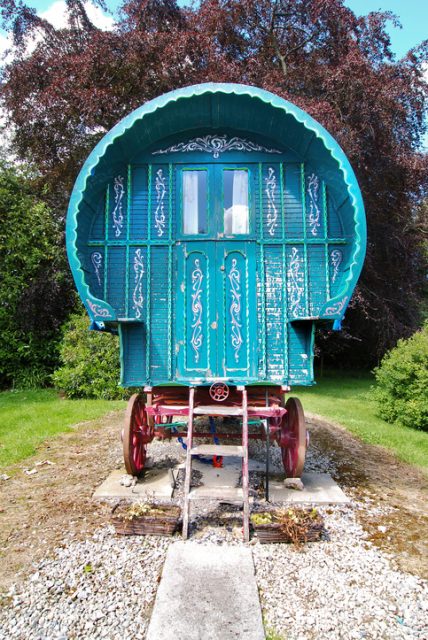 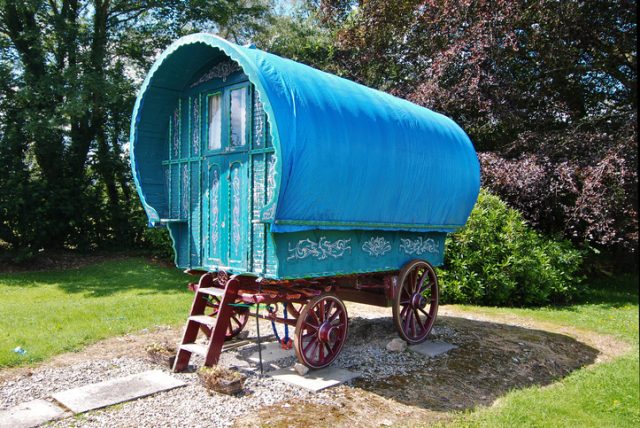 Bowtop style, with a waterproofed canvas roof stretched over a wooden frame. 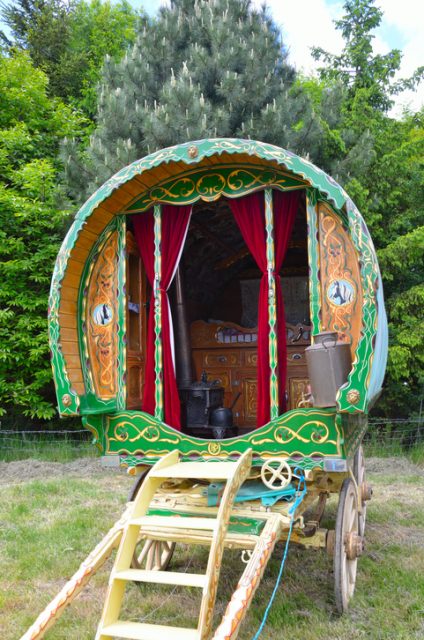 The Openlot is similar to the Bowtop style, but has an open doorway with just a curtain for privacy. You can see the decorated ceiling inside. 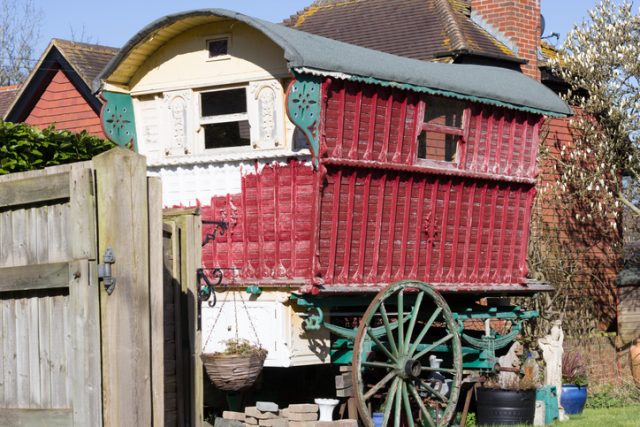 A Roma caravan in Sevenoaks Weald in Kent, England. 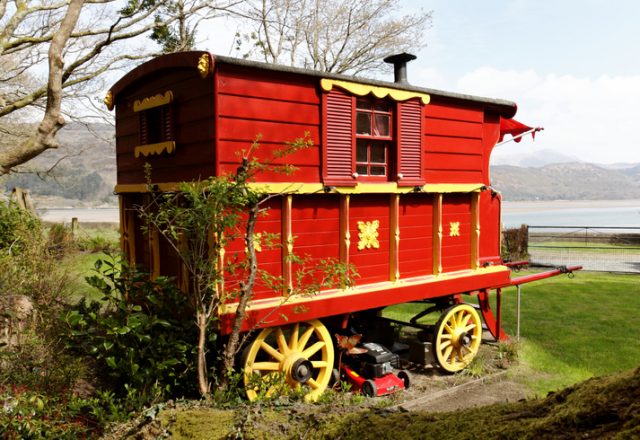 A colorful Romani caravan overlooking the Mawddach Estuary in Wales. This one is a Burton wagon – the wheels are underneath the body, allowing more room inside than a Reading or Ledge. 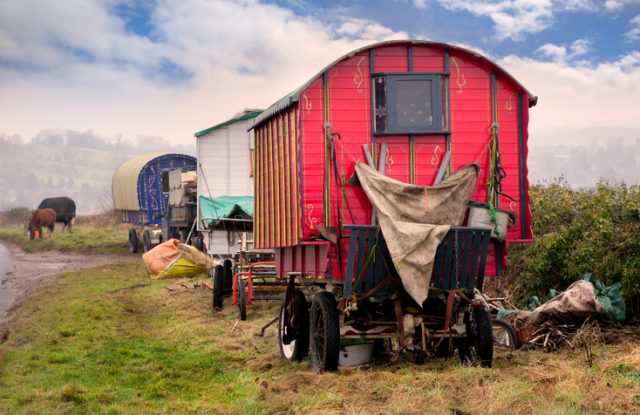 Romani vado’s and horses parked up on the roadside, Chipping Campden in the Cotswolds Gloucestershire, England. 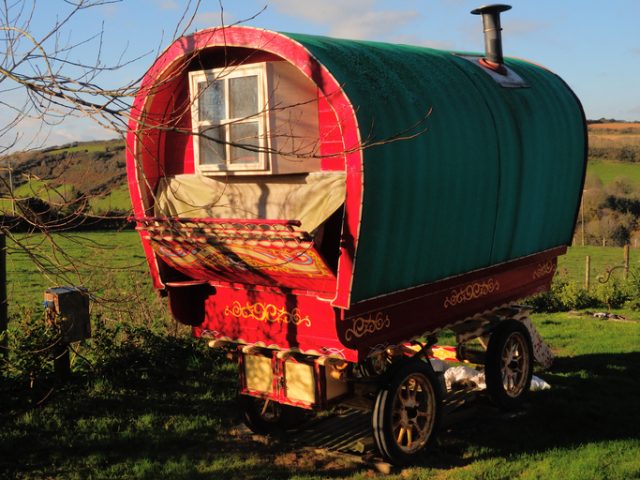 Colorful vardo in a field. 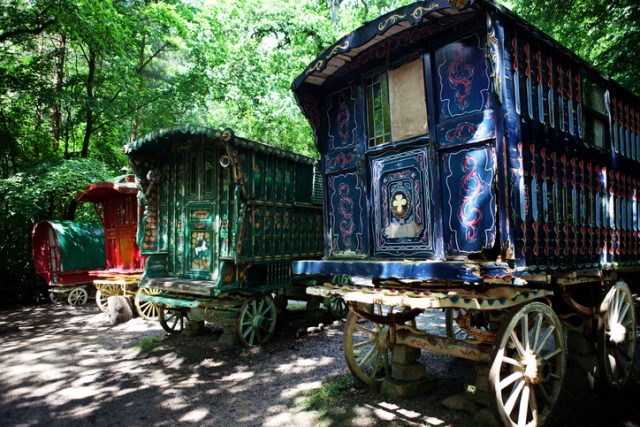 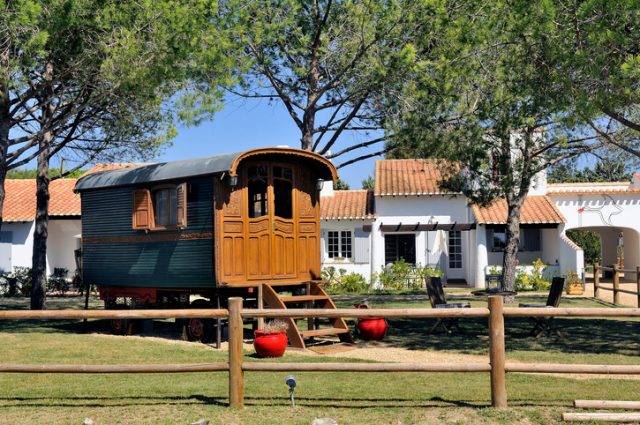 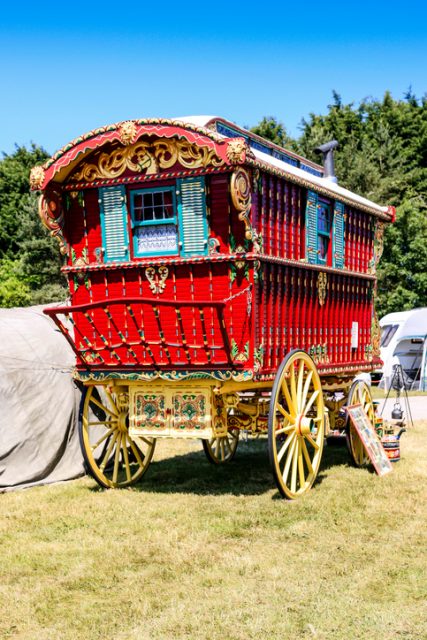 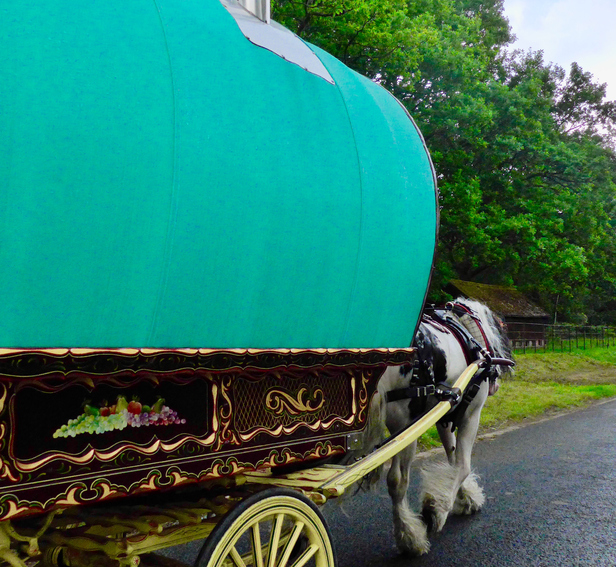 Romani Wagon in the UK 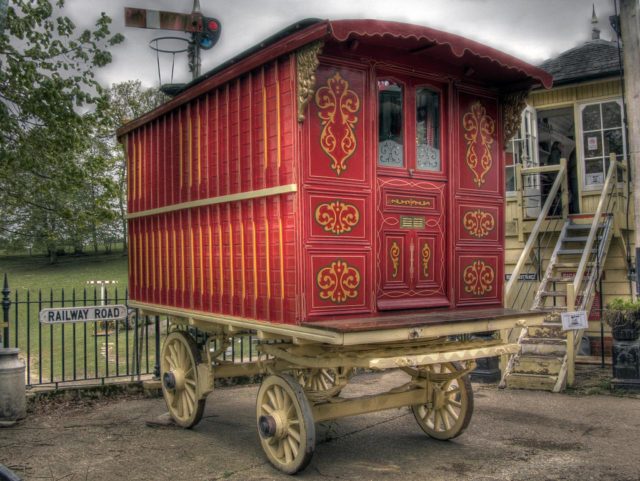 Romani caravan parked in an artistic setting. Photo by big-ashb-CC by 2.0Flickr 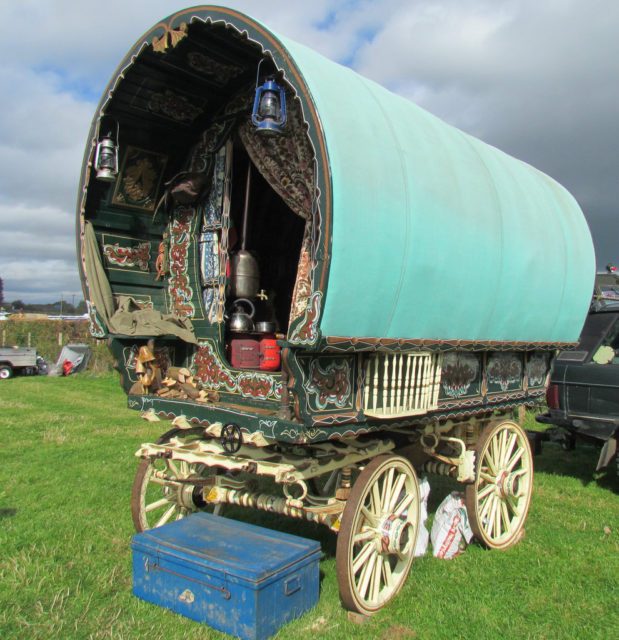 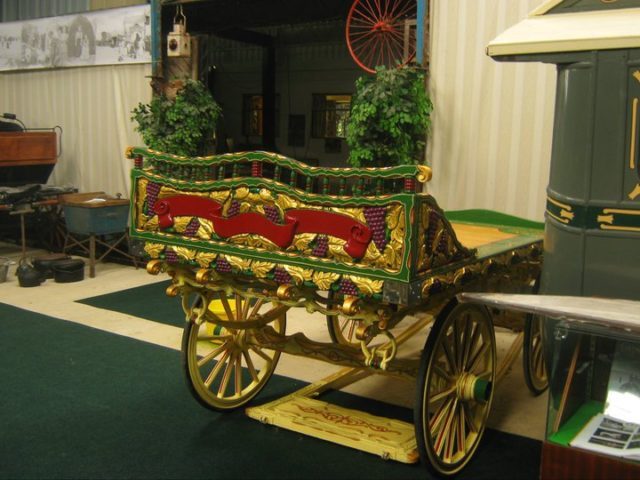 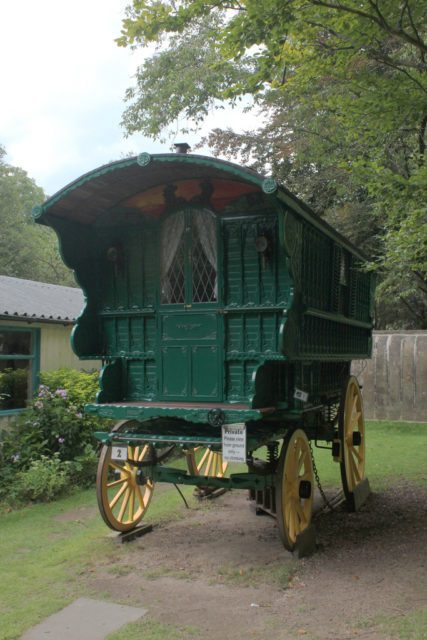 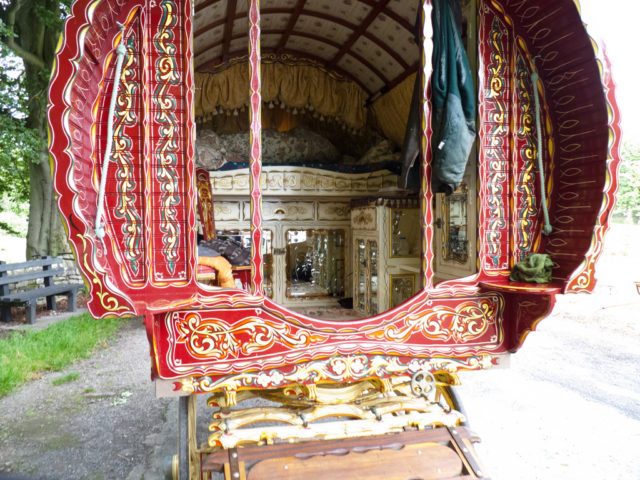 The inside of a traditional vardo is as ornately decorated, if not more so, than the outside. Photo by Much Ramblings CC By 2.0Flickr 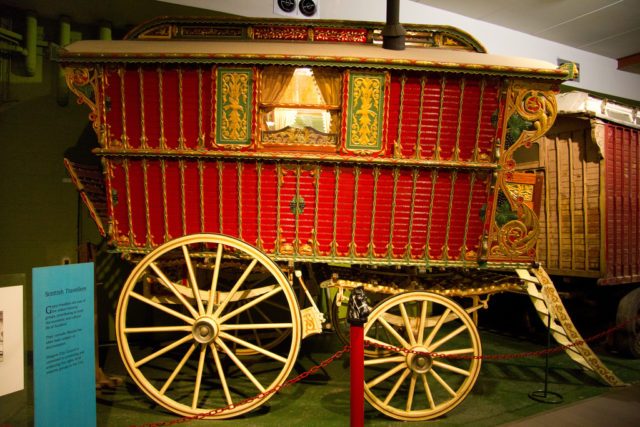 Vardo as part of a museum display. Photo by Ian D- CC By 2.0Flickr 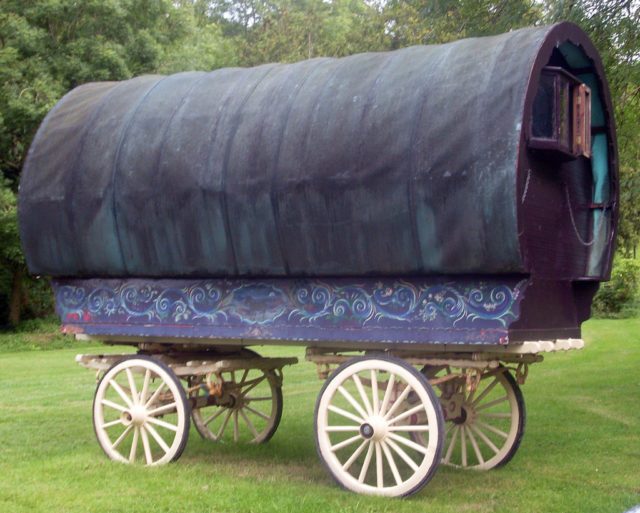 The outside of the canvas roof on an Openlot or Bowtop was usually plain, but the inside would be decorated. Photo by Abi Skipp- CC By 2.0-Flickr

Typically, it was a mobile household which included everyone, from small children to the elderly. Each family member took care of their own assignments for the day.

Some of the group members were there to work and earn money. If there were kids, it was the grandparents who normally took care of them.

After an active day, there usually followed a get-together evening by a campfire set alongside the cart. Families entertained themselves by the fire sharing jokes, narrating stories, singing, and playing music.

Inside the Romani vardo wagons, there was enough room for sleeping. Besides beds, they contained all the necessary appliances and assets to run a household. Perhaps it was all in miniature but there was everything: a stove, some cupboards, a table, chairs, and a place to store clothes and other belongings.

The vardo wagon was not only a warm little home–it also paid the ticket to freedom.

« Famous people with historical “twins”
The Spy with the wooden leg »