Brady Bunch house is now for sale for $1.8 Million

The house where America’s favorite blended family of the 1970s “lived” is up for sale for $1.885 million. During the famous opening credits for The Brady Bunch, the house that was shown was this three-bedroom, two-bathroom in the Studio City neighborhood of Los Angeles.

Of course the actors played out their scenes in an actual studio. But this was the house shown at beginning and end, and pictures of it arouse intense nostalgia in those who loved the series that ran from 1969 to 1975.

As the Vietnam War raged and President Nixon fell, Americans found escapism in a comedy about a single father with three sons marrying a single mother with three daughters. 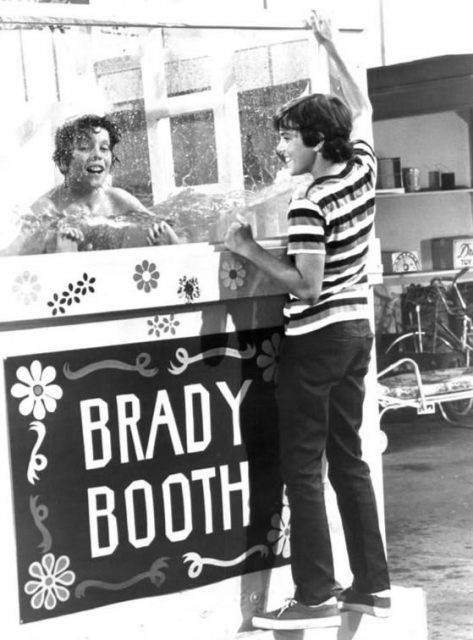 Photo of Mike Lookinland (Bobby) and Christopher Knight (Peter) from the television program The Brady Bunch. Bobby is trying out a dunk tank Peter has built for the school carnival.

Many can still recite the lyrics to the theme song, performed by the Peppermint Trolley Company, by heart:

“Here’s a story, of a lovely lady
who was bringing up very lovely girls
all of them had hair of gold like their mother.
the youngest one in curls.

Here’s a story, of a man named Brady
Who was busy with 3 boys of his own.
They were 4 men living all together
yet they were all alone

Till one day when the lady met this fellow.
And they knew it was much more than a hunch,
That this group must somehow form a family,
That’s the way they became the Brady bunch.

The “Brady Bunch house” in Studio City is reportedly one of the most photographed homes in America and attracts about 30 fans each day. The property has its own Yelp page. 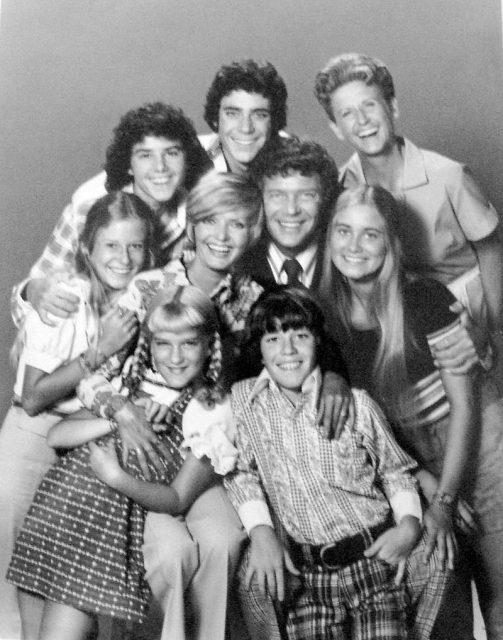 The owners allowed the producers to photograph and show their house in the series.

CBS News reports: “Its asking price of $1.885 million represents a big windfall for the current owners, who bought the property for $61,000 in 1973, according to purchase records, the Associated Press reports. That means this is the first time the house will have changed hands since The Brady Bunch was still in its heyday.” 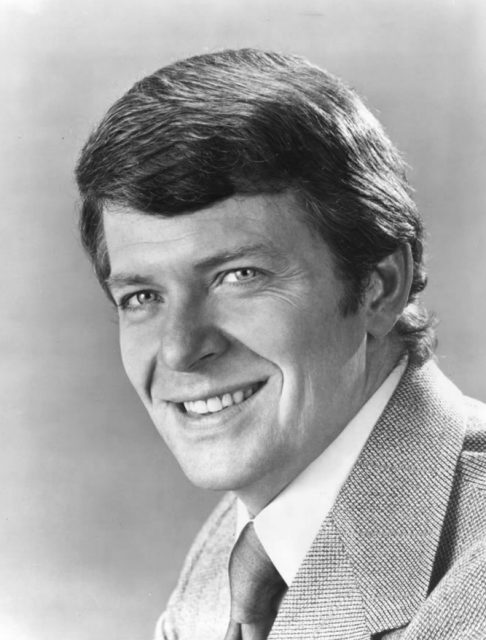 Photo of Robert Reed, who was well-known for his portrayal of Mike Brady in the television program The Brady Bunch.

Real estate film Douglas Elliman plans to show the home by appointment only in hopes of weeding out the sightseers from the serious buyers. 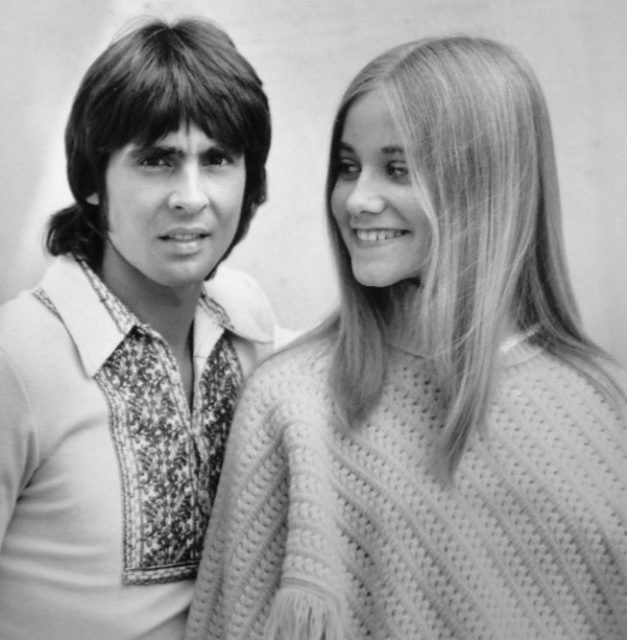 Davy Jones with Maureen McCormick in the 1971 The Brady Bunch episode “Getting Davy Jones.”

The home has about 2,500 square feet of living space, but that may not include an expansion of the downstairs family room, says Carswell. The garage was converted into a recreation room. The house also abuts the L.A. River.

“I just don’t think we can have a Sunday open house where 1,000 people show up,” Carswell said in an interview. “We’d be inviting chaos.”

The Brady Bunch first aired on September 26, 1969. Florence Henderson played the smiling blonde Carol Brady and Robert Reed played tall, dark, and handsome Mike Brady. Along with the six children, there was the comical live-in housekeeper, Alice Nelson, played by Ann B. Davis, who had a form of romance going with Sam the Butcher. 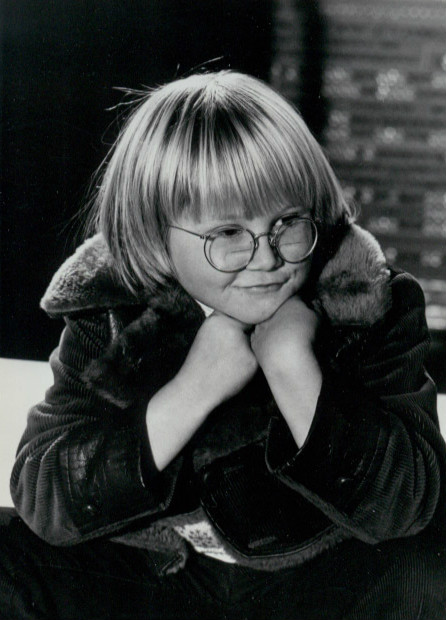 The show’s producer, Sherwood Schwartz, developed the series after he had a ratings hit with Gilligan’s Island. It became a staple of syndication, with new waves of fans discovering it. Schwartz said the scripts being written from the veiwpoint of the children and their problems (never truly serious) made it a success. 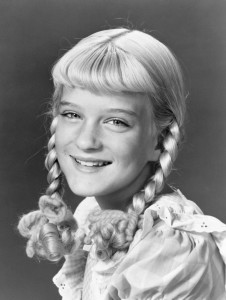 Olsen as Cindy Brady, the youngest of The Brady Bunch.

One of the themes of the show is the insecurity that Jan, played Eve Plumb, feels about her older sister Marcia’s smug blonde beauty. “Marcia, Marcia, Marcia” has been mouthed by many a Brady fan.

One of the unanswered questions of the show is how Mike Brady, an architect, is able to effortlessly pay the bills for such a large family and live-in staff. Florence Henderson lobbied the producers to write a plotline that Carol Brady went to work, but they said no. 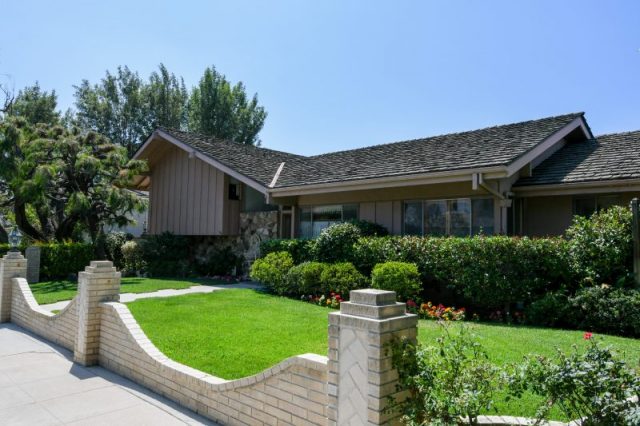 The house used in the American sitcom “The Brady Bunch” has been listed for sale at $1.885 million July 19, 2018 in Los Angeles, California.

Robert Reed was sometimes unhappy with the corny wholesomeness of the show and argued with Schwartz over the scripts. Reed, who was gay, also struggled with the romantic scenes with Henderson, and she said in later interviews she worked to accommodate his discomfort with the situation.

If the show was renewed for a sixth season, Schwartz said later he considered recasting the role of Mike Brady because Reed was unhappy. There were spinoffs and reunion shows after it ended its first run, and Reed did appear in those out of loyalty to the rest of the cast. He died in 1992.

The show received a lot of fan mail, including letters from children who said they wanted to leave their own families and live with the Brady Bunch.